Activists erupted into cheers at the Royal Courts of Justice after successfully blocking plans for a third runway at the UK‘s busiest air hub.

Lord Justice Lindblom found that the plans backed by MPs disregarded the UK’s Paris Agreement pledge in 2015 to reduce carbon emissions to 1.5C or “well below” 2C warming.

“We have concluded that the designation of ANPS (Airports National Policy Statement) was unlawful by reason of a failure to take into account the Government’s commitment to the provisions of the Paris Agreement on climate change,” he told the packed courtroom in Central London.

The failure of the Secretary of State to justify the plans had been “legally fatal”, he added. But the judges dismissed the other appeals against the Government, including on challenges relating to noise and air quality.

The ruling came after green groups teamed up with London Mayor Sadiq Khan and local authorities affected by the proposal to mount a series of legal challenges against the expansion.

Plans for a third runway – which had been on track to open in 2028-29 – would have rerouted rivers, roads and the M25 and contributed an estimated 3-4million tonnes to UK’s carbon emissions. The cost of the project was initially estimated at £14 billion but has since risen to £32 billion.

Head of Legal at Friends of the Earth, William Rundle, told DeSmog UK: “It’s an historic victory for the climate and for the local communities fighting the Heathrow expansion for so very, very long.

“What we’ve managed to do is to stop the Heathrow expansion dead in the tracks. 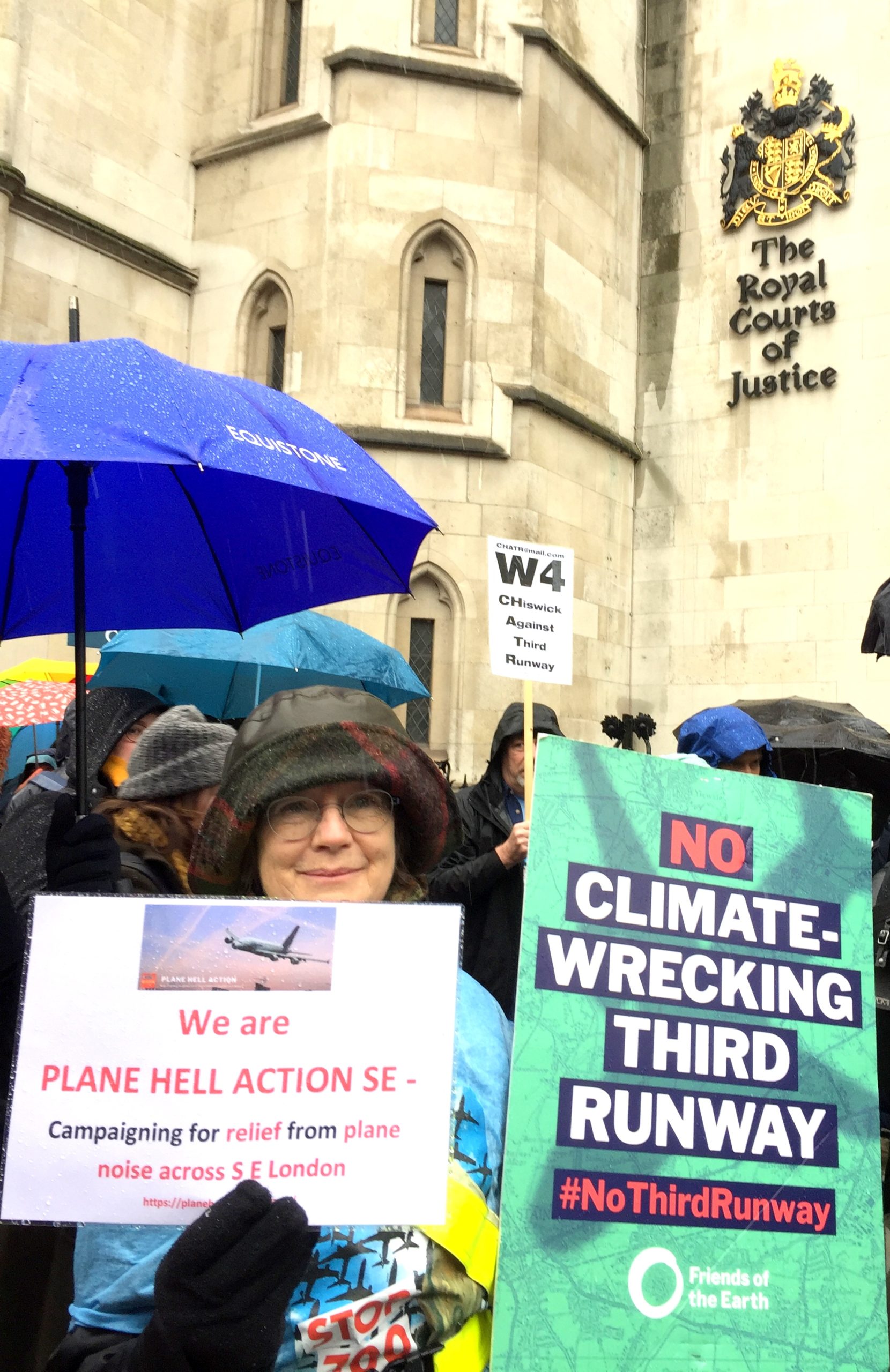 “The government’s plan has been found to be illegal because they didn’t consider climate change properly, and shockingly, took legal advice that the Paris Agreement was not relevant.

“At the time of the climate emergency this is an attitude that we really need, and we are really celebrating the Court of Appeal’s judgment. We need to put a halt to aviation expansion.”

Speaking outside the court, Mr Khan said the decision was a victory for Londoners and for “future generations”.

He told reporters: “What the government should now do is not tinker, not tweak with their airports and national policy statement. Instead what they should do is abandon any plans for a new runway at Heathrow.”

Mr Khan added: “I think we have given the Prime Minister a way out without lying in front of any bulldozers.”

Prime Minister Boris Johnson, who in 2015 vowed to “lie down before the bulldozers” to oppose the third runway, has been noncommittal about the airport in the intervening five years, saying recently: “The bulldozers are some way off but I am following with lively interest the court cases”.

While the Court of Appeal does not have the scope to rule out the expansion going ahead, the ruling means the plans will now be subjected to renewed scrutiny in Parliament amid increased public pressure to meet its climate pledges.

Heathrow Airport and fellow supporters of the scheme have long argued that the expansion would bring considerable regional and national benefits as well as boost GDP growth to the UK after Brexit.

However, a report by the New Economics Foundation (NEF) found that an expansion would do the opposite of “levelling up”, by shifting jobs, carbon emissions and GDP from other regions into London and the south east from the North of England.

They also said the UK would be “blowing its carbon budget” – and that the 3-4 million tonnes of carbon emissions would be equivalent to the footprint of 100,000 jobs in manufacturing.

A cross-party group focusing on regional connectivity launched to oppose Heathrow expansion said they found a significant “Heathrow effect”, after listening to the NEF report at their first meeting on Tuesday.

Member David Simmonds MP told DeSmog UK that the decision had “vindicated the concerns of my constituents and of environmental campaigners across the country”.

“The full environmental impact has not previously been given sufficient consideration and the economic case for a third runway at Heathrow has been consistently overstated,” he said.

MPs backed the expansion by 415-119 votes in June 2018, after Labour leader Jeremy Corbyn gave his Party a free vote. Sadiq Khan’s initial court challenge was unsuccessful, but the group was given leave to appeal in October last year.

Responding to the ruling, a Heathrow Airport spokesperson said the challenge on climate change front was “eminently fixable” and pledged to “get Heathrow done” regardless.

“We will appeal to the Supreme Court on this one issue and are confident that we will be successful,” they said.

“In the meantime, we are ready to work with the Government to fix the issue that the court has raised.  Heathrow has taken a lead in getting the UK aviation sector to commit to a plan to get to Net Zero emissions by 2050, in line with the Paris Accord.

“Expanding Heathrow, Britain’s biggest port and only hub, is essential to achieving the Prime Minister’s vision of Global Britain.  We will get it done the right way, without jeopardising the planet’s future. Let’s get Heathrow done.”

“The Court of Appeal ruled today that the Airports National Policy Statement designated by the previous Government did not take account of the Paris Agreement, non-CO2 emissions and emissions post 2050, and therefore has no legal effect unless and until the Government carries out a review.

“This Government has taken the decision not to appeal today’s judgment. We take seriously our commitments on the environment, clean air and reducing carbon emissions. We will carefully consider this complex judgment and set out our next steps in due course.”