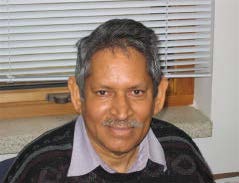 Tad Murty is former senior research scientist for the Department of Fisheries and Oceans. He passed away in 2018.[12]

He was a former director of Australia’s National Tidal Facility as well as a professor of Earth Sciences at Flinders University, Adelaide. Before joining the University of Ottawa, he worked as a senior scientist with Baird & Associates Coastal Engineers in Ottawa. [1]

Murty was an adjunct professor for the Departments of Civil Engineering and Earth Sciences at the University of Ottawa. [1]

Murty is on Senator Inhofe’s List of “prominent scientists” who deny the existence of man-made climate change. [9]

Murty was quoted by Senator Inhofe’s Environment and Public Works, quoting a prior interview with Murty, as having changed his mind on global warming: [11]

I stated with a firm belief about global warming, until I started working on it myself,” Murty said.  “I switched to the other side in the early 1990’s when Fisheries and Oceans Canada asked me to prepare a position paper and I started to look into the problem seriously.”

Tad Murty was quoted in the Spring 2005 issue of Carleton University’s magazine:

“This is the biggest scientific hoax being perpetrated on humanity. There is no global warming due to human anthropogenic activities. The atmosphere hasn’t changed much in 280 million years, and there have always been cycles of warming and cooling. The Cretaceous period was the warmest on earth. You could have grown tomatoes at the North Pole.” [3]

Murty wrote an article in The Ottawa Citizen:

“It turns out that our planet – and therefore the science that attempts to describe it – is immensely more complicated than Kyoto supporters suggest. Forty billion dollars buys a lot of science, and that science is paying off. We now understand the complexity and natural variability of climate in ways that were unimaginable just 10 years ago.

But the price of this understanding is that we now know that we do not know why the Earth is warming. We do not know if humans have anything to do with it, and they may well not. The scientific assumption behind the Kyoto protocol, namely that humans are known to be significantly interfering with an otherwise unchanging climate, is simply false. A new era of climate science lies before us.” [4]

Murty was on the writing team for the Fraser Institute‘s 2007 Independent Summary for Policymakers (ISPM) of the IPCC‘s Third Assessment Report (TAR). [5]

The ISPM‘s conclusion was “there will remain an unavoidable element of uncertainty as to the extent that humans are contributing to future climate change, and indeed whether or not such change is a good or bad thing.”

The Fraser Institute has received funding from several tobacco companies including Rothmans, British American Tobacco and Phillip Morris. It also received $120,000 from ExxonMobil between 2003 and 2004.

Murty was a signatory to a 2006 open letter to Prime Minister Stephen Harper that denied the existence of climate change while urging that no actions be taken on climate policy.  The letter was signed by many prominent climate change skeptics. [10]

According to his archived profile at the University of Ottawa, “Dr. Murty has some 20 books to his credit, as an author, co-author and editor and has published extensively in peer reviewed scientific journals.”

According to a search of Google Scholar, Murty has published in peer-reviewed articles mainly in the area of Tsunamis and storm surges.

Murty is the co-editor of the journal Natural Hazards.