The denial machine regularly recycles phony findings that climate change won’t be all that bad, or is all a big mistake. Meanwhile in the real world, the scientific implications of global warming just keep getting worse.

The latest is a paper published in the prestigious journal Science showing that melting ice caps in Antarctica will unevenly flood the planet – leading to much higher sea level rise in heavily populated areas of the northern hemisphere than previously believed.

According to these latest figures, Washington, New York and California could see the ocean rise by more than 21 feet – up to 25% higher than previously projected. Southern Florida could disappear entirely beneath the waves. 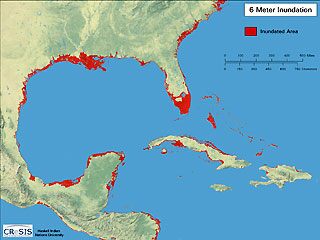 For years researchers assumed that the world’s oceans would behave like a bathtub in a warming world – any additional water from melting ice would spread evenly around the globe. Not true according to the researchers at Oregon State University, and the reasons illustrate the enormous forces being unleashed by our continued addiction to fossil fuels.

So colossal is the Antarctic ice mass that it exerts a powerful gravitational pull on surrounding waters, raising local sea levels. As this melting mass pours into the ocean, this effect will dissipate, redistributing waters elsewhere in the world.

“When an ice sheet melts, sea level does not change uniformly,” says Jerry Mitrovica, a geophysicist at the University of Toronto. “You get this whopping amplification of sea-level rise in North America.”

Scientists had also not considered what would happen to the underlying landmass when the incredible weight of Antarctic ice is released in a warming world. Researchers now believe that the Antarctic bedrock that currently sits under the ice sheet will slowly rebound upwards, pushing huge amounts of water out into the ocean.

Lastly, the melting of the West Antarctic ice sheet will cause the Earth’s rotation axis to shift, moving water northward.

“The net effect of all of these processes is that if the West Antarctic ice sheet collapses, the rise in sea levels around many coastal regions will be as much as 25 per cent more than expected,” said Mitrovica.

Don’t sell your waterfront just yet. These changes will take a long time but this research illustrates just how little we know about the dangerous and complex consequences of playing with the thermostat of the planet.

You can also check out this video of the researchers discussing their frightening findings. As an amusing aside, you can usually tell real scientists from store-bought variety because they dress worse, have less media training and look like they are appearing in a home movie. All of that is to their credit because they are rather preoccupied with unraveling the secrets of creation instead of prepping for spin session on Fox News.

As for the denial machine, expect them to ignore this research – and every other emerging scientific finding about climate change.

As a well-funded PR campaign rather than an honest intellectual exercise, such political theatre remains blissfully isolated from the real world. Expect more gooblygook about sunspots.