While renewable energy is on a roll — setting records in Europe over the last few months, and racking up impressive numbers in capacity buildout in 2017, it’s easy to forget what is happening behind the scenes.

Extreme weather gets all the headlines: the wildfires in Canada and Sweden, the flooding in Japan, the heatwaves in Canada and the U.S. But what are called the slow onset climate change events are inexorably moving forward.

Let’s start with sea level. The Union of Concerned Scientists (UCS) recently published a report called Underwater, which examined more closely the impact of future sea level rise on coastal cities in the U.S. The UCS took as their baseline that global mean sea levels would rise about 2 meters between 2010 and the end of the century — a projection judged as being very likely in several reports published last year.

The UCS report looked at the impact on coastal communities of chronic inundation due to sea level rise — defined as a zone experiencing at least 26 floods a year. By the end of the century, the UCS analysis shows that as many as 2.4 million of today’s residential properties and about 107,000 commercial properties, worth roughly $1.07 trillion, would be at risk of chronic flooding.

As several million American coastal residents are forced to move inland, coastal property values collapse. The tax base of coastal towns drops catastrophically — resulting in the dramatic reduction in numerous critical social services and the total impoverishment and eventual abandonment of many coastal communities.

In the US, Florida and New Jersey are most at risk. Over the next 30 years, roughly 64,000 homes in Florida and 62,000 in New Jersey will be at risk of chronic flooding.

These states are just the worst affected, but the whole of the eastern shoreline of the US and the coast of Atlantic Canada are all hugely at risk — particularly the low lying areas of Nova Scotia.

A sea level rise of two meters in 2100 now looks like wishful thinking. Recent satellite data from NASA and the European Space Agency, show that ice losses from Antarctica are causing sea levels to rise faster today than any time in the past 25 years. The rate of melting has risen three fold since 2012.

Sea level rise is essentially caused by two related phenomena: the melting of icesheets and glaciers, and the expansion of ocean water as it warms. It’s the melting bit which is slowly spiralling out of control.

The Greenland and Antarctic icesheets hold absolutely enormous quantities of ice. Together they lock up 99 percent of the world’s fresh water. Literally trillions of tons of ice which — if it all melted away (which it won’t) would raise sea levels by more than 60 meters, inundate and render uninhabitable most of the islands in the Caribbean and the Pacific, and flood countless American, Canadian, and European coastal communities, driving millions of families inland in search of higher ground.

It’s not going to happen — not in our lifetimes anyway.

The Antarctic is a colossal ice sheet — the largest in the world and about 9 times larger than Greenland’s. Before 2012, ice was being lost at a steady rate of about 76 billion tonnes a year. But since 2012, the amount of ice lost has jumped to almost 220 tonnes a year. Nearly three times higher.

Most of this loss was from the huge Pine island and Thwaites glaciers — which are rapidly retreating due to ocean-induced melting.

More importantly, data from the GRACE satellites show that both ice sheets, Antarctica and Greenland, have undergone an accelerating rate of melting since 2009. The rest of the world’s glaciers — much smaller but still a major factor in global sea level rise — have been melting since at least 1980.

This acceleration in sea level rise is being matched by other fundamental climate metrics. Consider atmospheric levels of carbon dioxide — the principal greenhouse gas and the major driver of increasing global warming. It’s not breaking news that global CO2 levels continue to increase — levels are now closing in on 410 ppm: up from about 320 ppm in 1970.

But most people might not be aware that the rate of growth of CO2 concentrations is not steady: it’s increasing. The rise in atmospheric levels of CO2 is accelerating — just like the melting of the Greenland and Antarctic icesheets and the majority of glaciers worldwide.

The chart below is from NOAA. Although there was a slowdown in the decade from 1990 to 1999, the rate of increase picked up where it left off in the decade that followed. The current decade from 2010 looks set to continue the long term trend — although we won’t know for sure until we get to 2020. 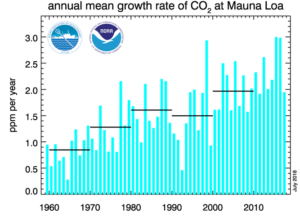 The take-away here is that we live on a planet where the changing climate is not business-as-usual. The fundamental geophysical factors that drive global warming, climate change, and sea level rise are accelerating.

One explanation is that many of the geophysical processes that govern these metrics are part of feedback loops: self-reinforcing linkages where the increase in one variable (like atmospheric CO2 levels), sets off a chain reaction that triggers changes (like global warming) which in turn lead to greater emissions of CO2. Positive feedback loops are inherently non steady-state. They accelerate.

For the small island states in the Caribbean and the Pacific there is no good news. The rise in global sea level is the unsteady platform on which king tides and storm surge from hurricanes and cyclones routinely create havoc for coastal communities and essential infrastructure.

Tuvalu, the Maldives, the Marshall Islands, and Suriname all have more than 20 percent of their population living at elevations within 3 meters of mean sea level.

In Singapore, a third of a million people live in coastal areas not more than 3 meters above sea level. In Guinea Bissau the number is about 140,000. The Maldives, and Puerto Rico all have more than 50,000 people living within the 3-meter low-elevation zone.

In terms of land area, the islands most at risk are Kiribati, the Bahamas, Cabo Verde, the Maldives, the Marshall Islands, and Tuvalu. Each of these countries will lose at least 20 percent of their land area to sea level rise and storm surge before the end of the century. Kiribati and the Marshall islands will each lose about a third of their land area.

Sea walls and other hard defenses will only delay the inevitable. They will also be hugely expensive — not just to build but also to maintain. And they are easily overwhelmed by Category 4 or 5 hurricanes.

The problem of climate refugees will be one of the dominant political issues of the 21st century.