The UK’s Energy Minister Claire Perry has strongly rebuffed anti-fracking campaigners warning them that energy policy should not be dictated by “the demands of the shouting few”, as she pledged to push ahead with the government’s shale gas agenda.

Perry made the comments during a fringe event at the Conservative Party Conference in Birmingham on Monday.

The event was organised by the low-tax think tank the TaxPayers’ Alliance, one of a number of organisations working out of offices in 55 Tufton Street near Westminster, alongside the climate change denying group the Global Warming Policy Foundation (GWPF).

As Perry addressed the audience of largely white men in blue suits, a group of anti-fracking protesters from Lancashire were holding banners and chanting outside the entrance of the conference centre.

Meanwhile, Perry told the fringe event: “With the level of protests about fracking we tend to assume that the majority of the British public has made its opinion on the issue, but it is not true.”

In its last attitute tracker published in August, the government did not ask the public whether they were for or against fracking in the first time in four years.

Perry added that the government’s decisions on fracking was not based on ideology but followed robust environment standards.

She said gas could help the UK bridge the energy gap to decarbonise the economy, reduce the country’s energy dependency and that the “British model” and expertise on shale gas could one day be exported globally.

She added that the fracking industry would help create jobs “in places which have been left behind for too long”.

Perry described gas as “a precious and valuable asset” for the UK and one “that we all use”.

“Apart from [Green MP] Caroline Lucas who says she has a solar stove at home, we all use gas when we come home to make tea for our kids,” she said.

Perry made the case for shale gas days after three anti-fracking activists were sentenced to jail after stopping a convoy of lorries going to the fracking site of Preston New Road in Lancashire.

Under the Paris Agreement, the UK has also pledged to reduce its greenhouse gas emissions as part of global efforts to limit temperature rise “well below” two degrees from pre-industrial levels.

A 2015 study published in the journal Nature, warned that half of the world’s gas reserves must not be burnt in order to prevent dangerous global warming exceeding two degrees.

Writing in PoliticsHome on the first day of the Conservative conference, Perry yet recognised that the transition to a low-carbon economy “is one of the biggest industrial opportunities of our generation” and one that could deliver “prosperity and high-quality jobs”.

‘The anti-fracking movement is about to roar’

Outside the Conservative Party conference, anti-fracking activists from Lancashire dressed as suffragettes were holding placards saying “No to fracking”.

Tina Rothery, one of the “Nanas” from the anti-fracking group Frack Free Lancashire, called on the government to respect local democracy after council decisions to reject planning permission for fracking projects were overturned.

“We voted to say no to fracking in Lancashire, they overturned this, they ignored our voices and they imprisoned three of our friends this week for non-violent direct action.

“The state is closing in and setting a dangerous precedent on our ability to exercise our human rights to protest and I think it is a very worrying time,” she said. 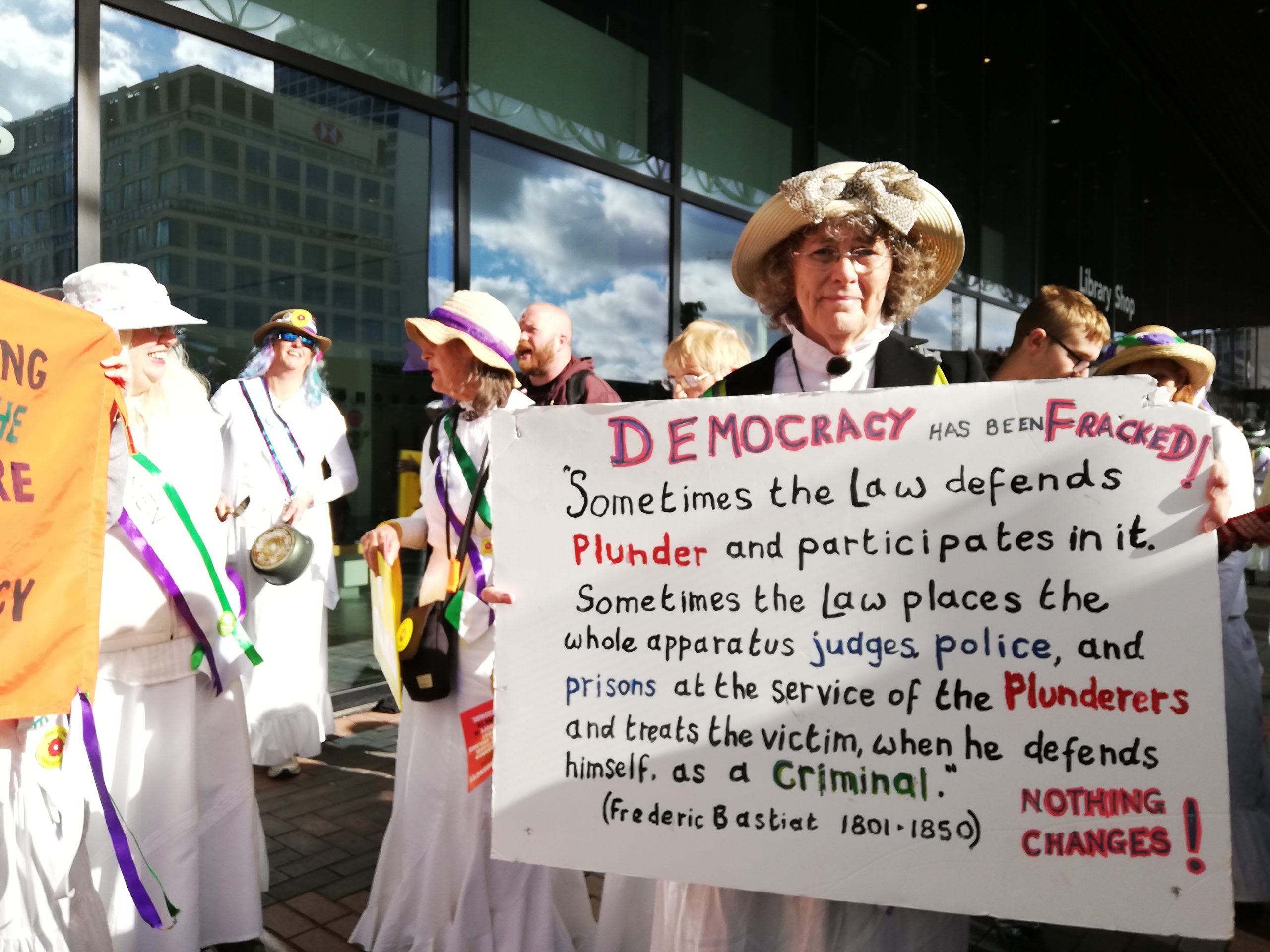 But inside the event entitled “Energy security: Is shale gas better for Britain?”, Perry made a scathing attack on anti-fracking campaigners accusing them of “peddling myths” related to public health and water use.

But for campaigners, the government has its science wrong. Instead, they point out to a compendium of peer-reviewed papers and studies which they say have informed other governments’ decisions to ban fracking in their country.

The intensification of the debate about UK fracking also comes as the government is considering waving the usual planning application procedure and speed-up the process for shale gas developments.

But while the government is sending clear signals that it will push ahead with developing this new fossil fuel industry, Rothery told DeSmog UK: “We are going nowhere. Someone told this conference yesterday ‘You haven’t even started to hear the fracking movement. They’re about to roar’. And we are.”

Cronin said gas would “benefit the communities in Lancashire” thanks to the creation of jobs and denied the claim that developing shale gas energy will lock the UK into decades of burning fossil fuels.

“Shale gas needs to be part of an energy mix alongside nuclear energy and renewables. It makes no sense to ignore the most economically and environmental viable source of energy,” he said.

Representing the GMB – which welcomes the development of a UK fracking industry – Fegan told the audience that in Lancashire: “You cannot see or smell fracking”, adding that there is “a well organised and fairly well-funded environmental lobby in the UK against fossil fuels that is punching well above its weight”.

Former MP Engel, now a director at Palace Yard Communications, said she recognised the fracking debate was “emotional rather than rational” and that some people had “legitimate concerns”.

Echoing energy minister Perry’s comments, Engel yet added: “Only a small handful of people are against fracking. There is a bigger social licence for it than the small group of loud campaigners.”