'They Are Not Criminals, They Are Heroes': Campaigners Gather at London Court for Appeal Against 'Excessive' Sentences of Anti-Fracking Protesters

Environmental campaigners converged on the Royal Courts of Justice in support of an appeal against the “excessive” sentencing of three anti-fracking protestors, warning that the case could set “a dangerous precedent that punishes environmental protestors for their beliefs”.

Dozens of campaigners carrying the red rose of Lancashire gathered in front of the court on Wednesday morning to show their support for the appeal case and denounced the sentencing of the three men as “disproportionate”.

Last month, anti-fracking protestors Simon Blevins, 26, Richard Roberts, 36, and Richard Loizou, 31 were sentenced to 16 and 15 months in prison at Preston Crown Court after being convicted of causing a public nuisance offence.  In July, the three men were arrested after they spent between two and four days on top of lorries that were making their way to the Preston New Road fracking site in Lancashire, where Cuadrilla Resources started to frack for shale gas on Monday.

This is the first time campaigners have been jailed in the UK for anti-fracking protests.

The three protestors have to serve half of their sentences in jail, with the remainder on license.

A fourth protestor, Julian Brock, pleaded guilty at a separate hearing and did not face trial. He received a 12-month suspended sentence.

Seb Kelly, from the campaign group Reclaim the Power, who was protesting outside the courts this morning, told DeSmog UK: “We are here because of the unjust imprisonment of our friends who took principled and non-violent direct action in protest to the undemocratic and dangerous fracking activities which have now started at Preston New Road.

“This is a politically motivated conviction that has been served to actively discourage others from taking action.”

Kelly added that while some people had been scared and deterred by the prison sentence, many others were “enraged and galvanised” by the case.

“I have never seen so much determination in the anti-fracking movement,” he said. 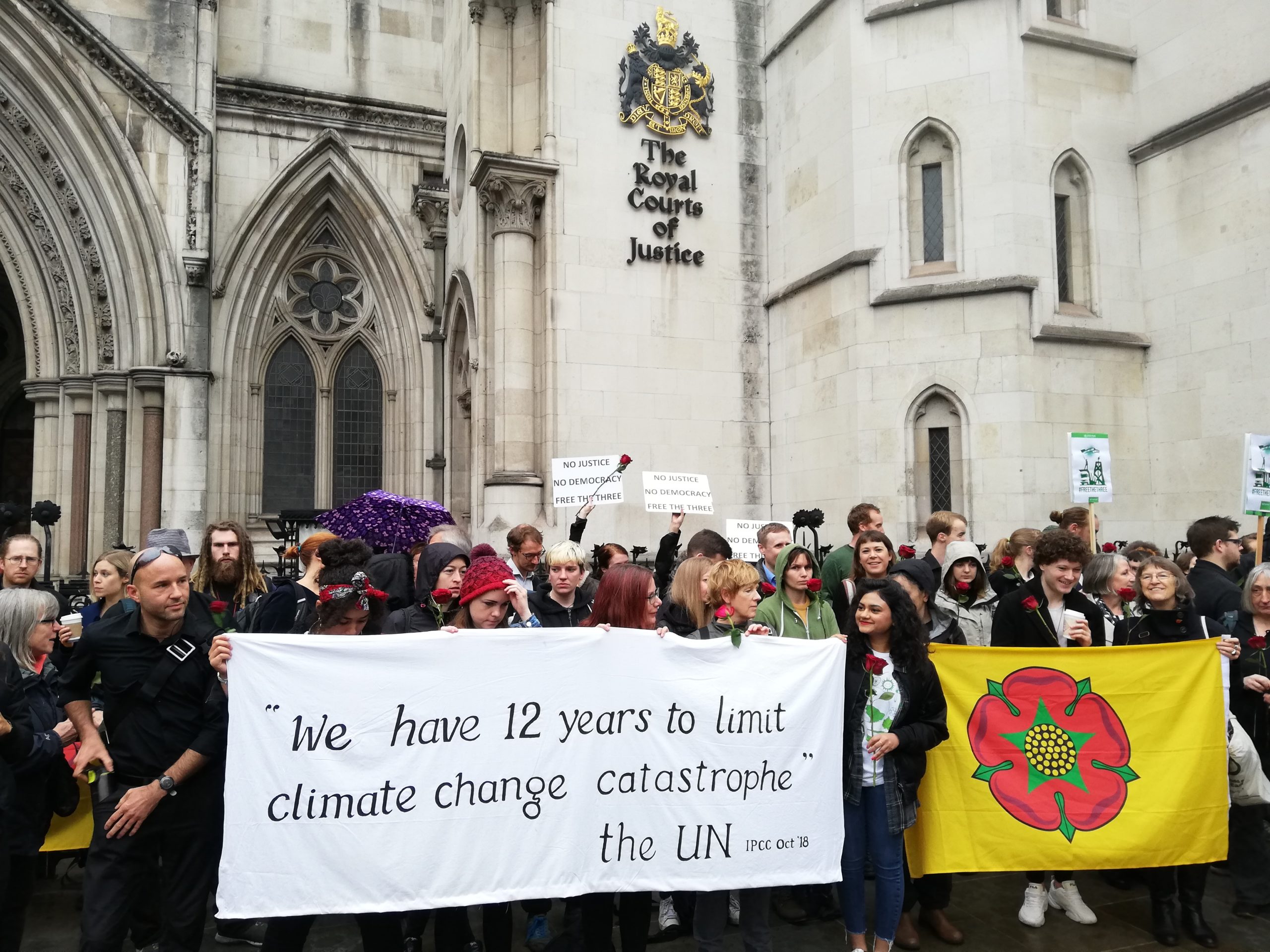 His comments were echoed by Anna Vickerstaff, a senior UK campaigner at 350.org, who said campaigners had received messages of support from anti-fracking protestors all around the world.

“What we have seen is that this case has mobilised people to stop the fossil fuel industry,” she said. “People see this not only as an issue of democracy and freedom to protest but also as part of a climate crisis and people are ready to stand together.”

They are expected to argue that the judge’s decision to treat the three men’s deeply held opposition to fracking as requiring the imposition of an immediate custodial sentences is contrary to the sentencing guidelines and legal precedent.

Katie de Kauwe, lawyer at Friends of the Earth, said that an individual’s moral convictions on climate change or environmental protection “shouldn’t be used as factor to justify harsh sentencing”.

“We believe that the fracking protesters’ passion for the environmental was unlawfully used against them, resulting in incorrect and draconian sentences,” she added.

The three men are represented by the human rights lawyer, Kirsty Brimelow QC, who is working pro-bono.

The parents of Rich Loizou, Platon and Sharron Loizou, joined campaigners in front of the court before the start of the appeal.

Platon Loizou told the crowd he was grateful to see so many people showing their support.

He said: “We should not be here today. The boys went on a demonstration. There was no criminal damage, no intimidation, and we’ve ended-up here. It’s a disgrace and the government should be ashamed of itself.”

Sharron Loizou also told DeSmog UK that they had been “so shocked” at the sentencing and that although they were hopeful for the appeal to be successful, they had to be prepared for the “worst case scenario”.

Earlier this month, more than 200 academics signed an open letter calling for a judicial review into the “absurdly harsh sentencing”, adding it was setting “a dangerous precedent”.

The case is due to be heard by the Lord Chief Justice Sir Ian Burnett, sitting with Justice Phillips and Justice Cutts.

Cuadrilla has not issued any statement ahead of the appeal case being heard.

The fracking site at Preston New Road has become the symbol of the anti-fracking movement in the UK.

Protestors have opposed the plans to drill for shale gas for years but the campaign intensified after October 2016 when the government overturned a decision by Lancashire County Council’s and granted Cuadrilla permission to frack two wells on the site.

Green MP Caroline Lucas and Green Party co-leader Jonathan Bartley, who are long-standing opponents of fracking, joined protesters in front of the Royal Courts of Justice.

Speaking in front of the court, Lucas said campaigners had come to “celebrate the principled position that those men took on behalf of all of us”.

“They are not criminals, they are heroes for standing up for our environmental rights. Friends, we know that the people who should be in court today are the politicians who are knowingly taking us towards climate chaos,” she said.

Cuadrilla began fracking in Lancashire on Monday a week after the UN Intergovernmental Panel on Climate Change (IPCC) warned that the world has 12 years to take “rapid and unprecedented” action to prevent dangerous levels of climate change.

Leading climate scientists said that to avoid dangerous global warming, the world needs to move away from all fossil fuels, which includes shale gas.

“What is this government thinking of?,” Lucas asked.

“As well as the climate vandalism of fracking, the [government’s] decision to go ahead with fracking was an absolute trumping of democratic rights. The people of Lancashire have made it loud and clear that they do not want fracking on their door steps. Well the government did not care much about the will of the people,” she added. 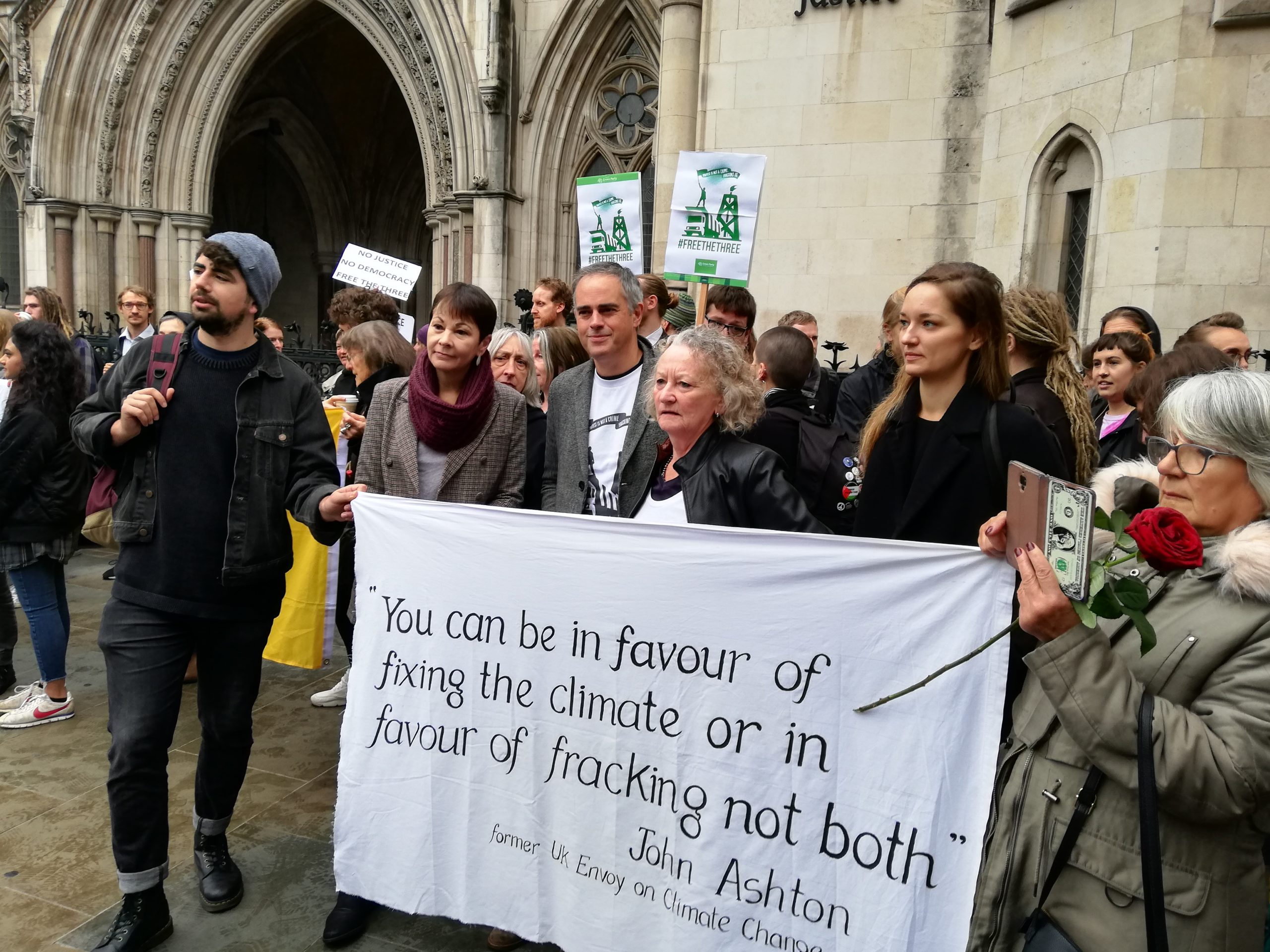 In a previous statement, Francis Egan, CEO of Cuadrilla said the company was “delighted” to be starting its fracking operations and that the company was evaluating “the commercial potential for a new sources of indigenous natural gas in Lancashire”.

Despite strong opposition from campaigners, energy minister Claire Perry has vowed to push ahead with the government’s plans to develop a fracking industry in the UK. Speaking on the fringe of the Conservative Party Conference, she described anti-fracking protesters as “a shouting few”.

She added that the fracking industry would help create jobs “in places which have been left behind for too long” and described shale gas as “a precious and valuable asset” for the UK.

Image Credit: Campaigners in front of the Royal Courts of Justice in London/@ChloeFarand