Extinction Rebellion: From the UK to Ghana and the US, Climate Activists Take Civil Disobedience World-Wide

More than 100 people were arrested during a week of action across the UK as protesters demanded the government treat the threats posed by climate change as a crisis and take drastic steps to cut emissions to net zero by 2025.

Thousands of people joined a mass protest that blocked roads and bridges in central London, with some gluing themselves to government buildings to draw attention to what they see as climate breakdown.

This was the birth of Extinction Rebellion, a movement that calls for mass economic disruption using non-violent direct action and civil disobedience to halt the destruction of the planet and its wildlife and prevent catastrophic climate change.

Around the world, environmental campaign groups and activists watched the action unfold. In London, there is a growing hope that this could be the start to a new form of international mobilisation for climate action.

From the US to Ghana and New Zealand to Western Europe, campaigners have shown enthusiastic support for Extinction Rebellion’s declaration of climate emergency.

Jamie Henn, co-founder of the campaign group 350, said watching the launch of Extinction Rebellion in London from the US had been “incredibly exciting” and embodied “a growing sense of anger and desire for radical solutions”.

Henn said he was confident Extinction Rebellion would inspire similar non-violent direct climate actions in the US over the coming months, but whether the movement was one that could endure the test of time was yet to be seen.

Margaret Klein Salamon, founder of the US grassroot group Climate Mobilization, said she believed Extinction Rebellion is “a game changer” for the climate movement.

She is part of a team of dedicated activists working on Extinction Rebellion’s international expansion, ensuring it has a robust enough infrastructure and resources to give the movement the capacity and stamina to organise in the long-term.

Salamon said Extinction Rebellion was born as the climate movement was shifting away from advocating gradual change to demanding immediate action in line with the scale of the climate crisis.

She said that for the first time, Extinction Rebellion set out the full implications of climate change on humanity and the planet’s ecosystems without shielding people from the consequences of the crisis for fear of being too alarming.

She added that Extinction Rebellion was advocating solutions that may have long been seen as impossible, but which the group believe could gather mainstream momentum.

Above all, Salamon said the use of peaceful civil disobedience as a means to engage people in  “power struggles” against governments and demand meaningful change is what made Extinction Rebellion unique.

“There is so much momentum around Extinction Rebellion and what is needed is to be able to escalate the disruption,” she said, adding: “This is still a very young movement but there is tremendous enthusiasm for it.” 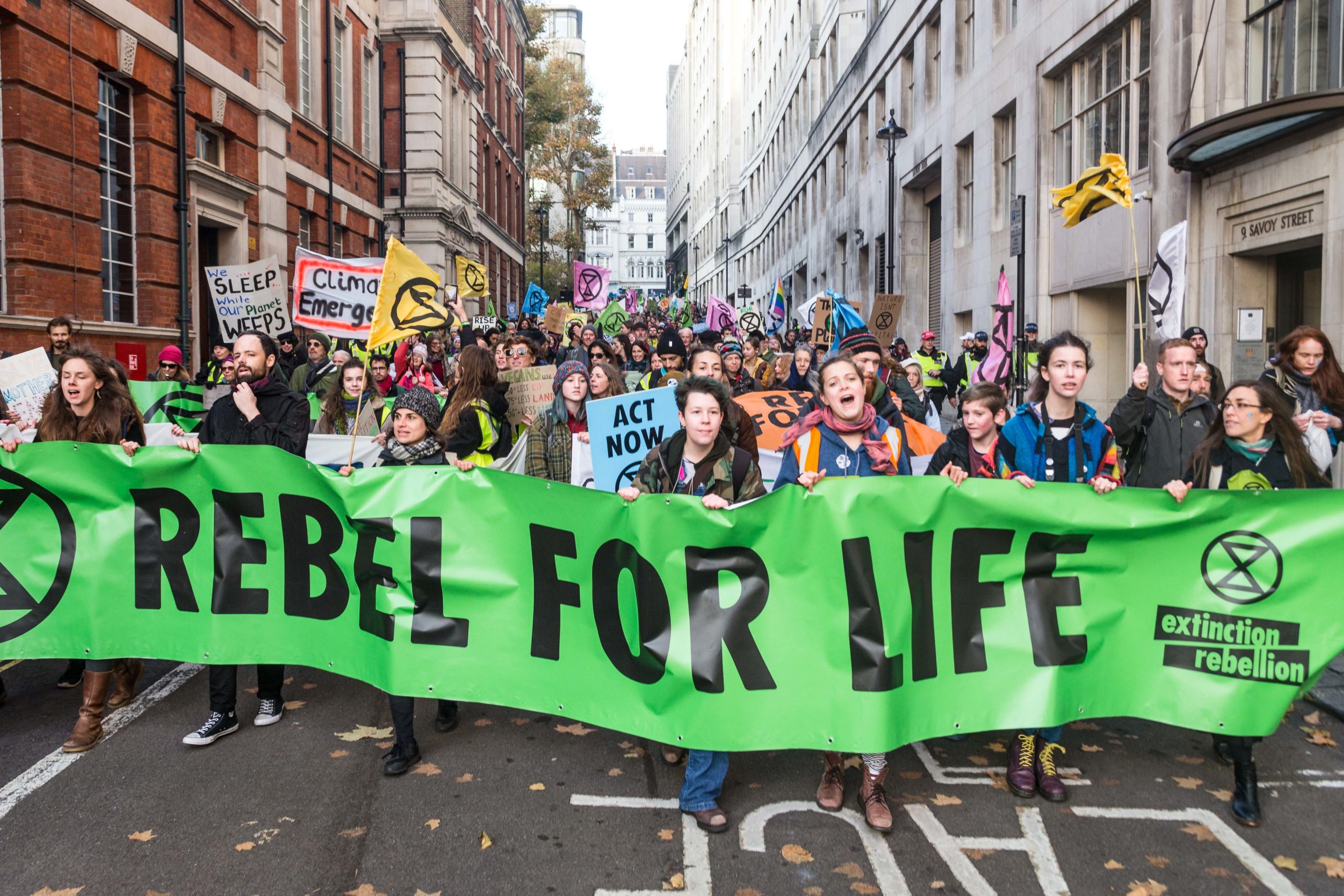 Extinction Rebellion’s first public action was to occupy the Greenpeace headquarters in London — a move which took the climate movement in the UK by surprise and aimed to warn environmental NGOs against becoming complacent about governments’ inaction on climate change.

Learning from past grassroots movements such as Gandhi’s independence marches, the Suffragettes, the Civil Rights movement and Occupy, Extinction Rebellion claims to aim to rally support worldwide around a common sense of urgency to tackle climate breakdown.

Robin Boardman, a coordinator with Extinction Rebellion in the UK, said the week of action that took place across the country was “a prototype for what a global resistance could look like”.

Pointing out that the UK is responsible for only one percent of current global emissions, Boardman added: “What happened in London is a drop in a pond compared to what could happen worldwide in months to come”.

Extinction Rebellion is working to establish campaign groups beyond the UK, with coordinators already working in the US, Canada, Australia, Switzerland, France, Germany, Netherlands, Belgium, Sweden, Italy and Spain.

But much of the movement’s international expansion is focused on the US.

“Like in the Arab spring, Tunisia started the uprising but it was not until it spread to Egypt that the whole movement gripped the Middle East,” Boardman said.

Inspired by US Senator Bernie Sanders’ 2016 presidential campaign, Extinction Rebellion wants to export its non-violent rebellion model and ambition of a widespread system change but allow for autonomous campaign groups to organise independently across the world.

“It is up for local groups as to whether people should be taking up action and what direction they move in. It’s about doing something different and shifting what is acceptable in the context of the climate crisis. When society is ready to lose its sense of fear in the face of state authority, then everything crumbles and change can happen,” Boardman said.

A broad church, Extinction Rebellion has attracted much support from religious groups, including Christian Climate Action, which had several of its members arrested in the UK last week.

Caroline Harmon, from the Christian Climate Action, said that her group has received messages of support from Christian communities across the world, who have been inspired by last week’s actions.

The first Extinction Rebellion action on the African continent was held earlier this month in front of a church in Accra, Ghana, where dozens of climate activists carrying Extinction Rebellion placards told churchgoers about the global climate resistance being born in the UK. 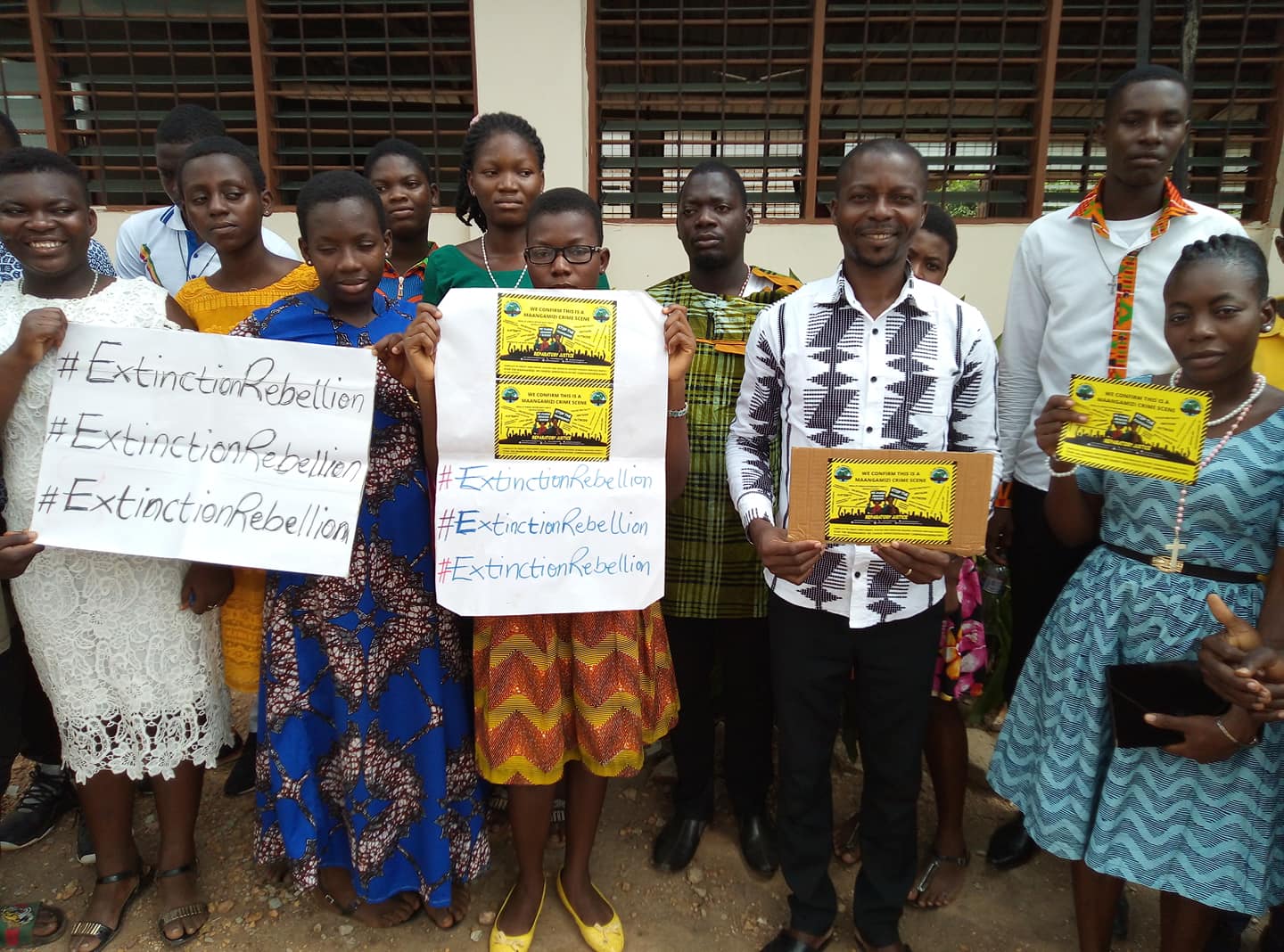 Mawuse Yao Agorkor, a grassroot social activist from Ghana and the general secretary of the West African Vazoba network, said the launch of Extinction Rebellion in London was “an exciting moment” and that he was hoping larger protests would “hit the streets of Ghana soon”.

The Vazoba network has long campaigned against deforestation, the use of toxic chemical and mining in the region and now hopes to use its organising tools and contacts across West Africa to spread Extinction Rebellion’s message.

Agorkor said he was not afraid of using civil disobedience as a means to ramp up pressure on his government. “I have been working on the ground for six years, and getting arrested for protesting in the interest of our planet is something that my group is not afraid of,” he said.

Agorkor is well aware that if the movement is to spread through Africa, it will have to adapt in places where police brutality is common fortune and protesters could be met with open fire. But for now, Agorkor believes the organising capacity of both Vazoba and Extinction Rebellion constitute “a good starting point”.

The emergence of Extinction Rebellion also comes at a time of great change in the US climate movement.

For Henn, of 350, Sanders’ presidential campaign, which inspired Extinction Rebellion’s mobilisation strategy, gave place to a new generation of young leaders including more women and people of colour — a trend reflected in the US’ Congressional midterm elections.

Newly elected liberals, led by the 29-year-old Alexandria Ocasio-Cortez, are demanding the Democrats back a “Green New Deal” to rapidly transform the economy to 100 percent renewable energy in a decade — a target largely in line with Extinction Rebellion’s own demand to reach net zero by 2025.

Henn said that the only way in which the Extinction Rebellion movement would take off in the US would be by “moving away from a climate movement that is predominantly made up of older, middle-class white people”.

Instead, Henn said Extinction Rebellion had “to build a multi-racial and multi-generational movement which will include young people of colour in its leadership and tackle issues such as equity and environmental justice”. 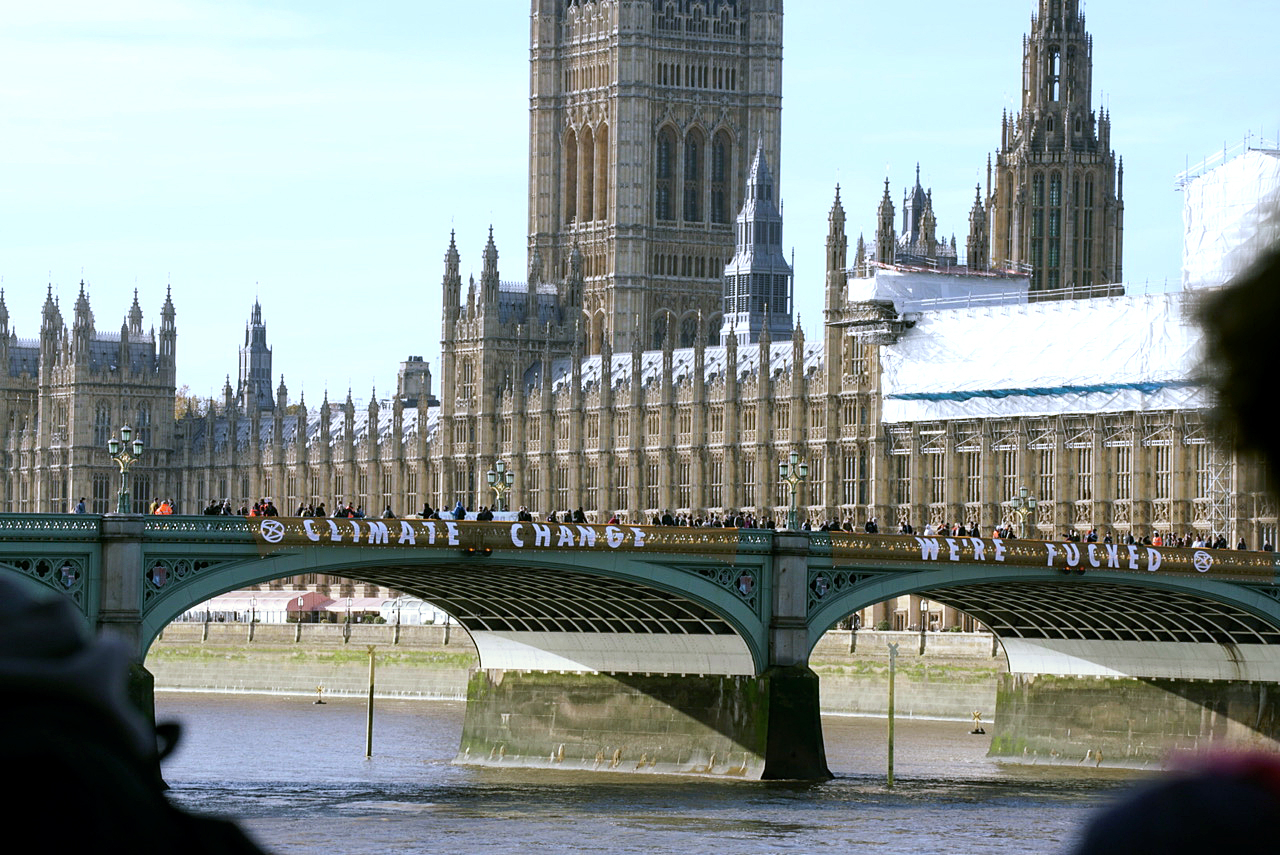 For Henn, the movement will also have to ensure it uses a universal language that inspires urgency but respects and reflects the experiences of those living on the frontlines.

Referring to a banner that was dropped from Westminster bridge in central London last week and read “Climate Change, We Are F**d”, he added:

“It is one thing to say such things from the safety of London, but it’s another if you are living on the frontline of climate impacts.

“Some people don’t have the privilege to give up”.