In an age of “fake news” and disinformation, in which climate science deniers have been elected to the head of some of the world’s largest governments, the UN climate talks continue to act as a stage for those who wish to cast doubt on the climate crisis.

And in Katowice, Poland, where the UN climate talks — known as COP24 — are underway, it was no different. A small group of climate science deniers tried to grab attention by hosting an event on the fringe of the conference, claiming to “present the science that debunks UN alarmism”.

But this year, very few were paying attention.

Year after year, climate science deniers have attempted to use the climate talks as a platform to undermine the global climate negotiation process.

The election of Donald Trump in the US and Jair Bolsonaro in Brazil, two populist politicians who denounced climate change as a political plot to stifle economic growth and want to withdraw from the Paris Agreement, may have given these fringe groups some semblance of credibility.

Jesse Bragg, spokesman for the NGO Corporate Accountability, told DeSmog UK that although climate science deniers’ tactics haven’t changed over the years, “what has changed is the hubris with which these deniers trot their junk science out but just because Trump makes these deniers feel confident”.

“But that doesn’t mean they actually have cause or that support for them is growing,” he added.

Inside the UN conference, climate science denial voices have traditionally been ignored. Both Trump and Bolsonaro’s election were a blow to the UN’s climate negotiations process but those denying the scientific consensus of climate change have not — at least yet — managed to crush the momentum behind the Paris Agreement.

The notorious Chicago-based climate science denial group The Heartland Institute, a long-standing visitor of the UN climate talks, came to Katowice on Tuesday to defend fossil fuels as “a cheap and abundant source of energy”. But very few bothered to listen to what they had to say.

The event was live-streamed on Youtube and was watched by about 50 people, according to the video platform. AFP journalist Frank Jordans, who was allowed inside the venue, reported that 10 people attended the event which received no other press coverage. 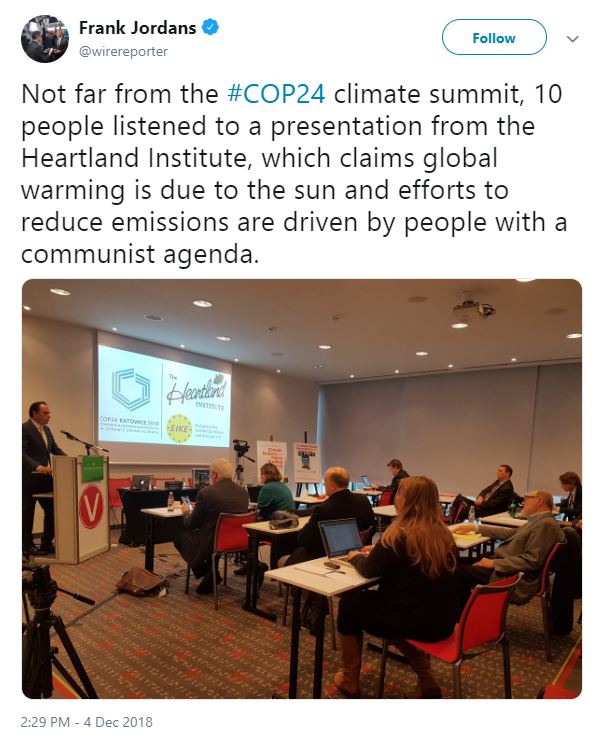 Speakers included Craig Idso, from the Center for the Study of Carbon Dioxide and Global Change, Dennis Avery, director of the Center for Global Food Issues and James Taylor, a senior fellow at The Heartland Institute.

The arguments were the same climate science deniers have been using for years — that the idea global warming is caused by increasing carbon dioxide in the atmosphere is the result of “climate totalitarianism” invented by “the socialist internationalist green movement”.

DeSmog UK applied for a press accreditation to attend the event but was denied access by The Heartland Institute, which claimed DeSmog was “not a news organisation” despite having official UN media accreditation to report on the climate talks.

This is not the first time The Heartland Institute has prevented DeSmog UK from reporting on its event. In 2015 in Paris, DeSmog UK journalists were kicked out of an event hosted by the group after the meeting was suddenly changed from being public to private.

Bragg, from Corporate Accountability, said that discrediting the press as illegitimate — a tactic repeatedly used by President Trump — could be an “incredibly dangerous and destructive” method in the disinformation toolkit.

“The effects of these broad attempts to discredit media will long outlast any one regime or politician. But the reality is that it’s a tactic that comes from desperation, not power. It’s a last-resort ploy used by an industry and ideology that is backed into a corner,” he said.

The rise of fake news has given fresh oxygen to climate science denial.

A recent study published in the Proceedings of the National Academy of Sciences journal found that the structural shifts that have occurred in the media in recent years “have enabled unscrupulous actors with ulterior motives increasingly to circulate fake news, misinformation, and disinformation”.

The study argues that this had led to “implicit ideological bias, political polarisation, and politically motivated reasoning” to prevail in the public sphere, leaving the door open for “scientific conclusions [to be] systematically perverted in the media through an internet-based campaign of disinformation and misinformation”.

For Dana Nuccitelli, a journalist who has extensively covered climate change denial, this strategy of labelling any critical media coverage as “fake news” has long been implemented by climate science denialists and continues to thrive today.

“Donald Trump has simply given the Heartland Institute cover to use the false accusation of ‘fake news’ to continue their usual strategy of banning voices critical of their campaign of disinformation,” he said.

Astrid Caldas, a senior climate scientist with the Union of Concerned Scientists, added that Trump’s vendetta against the “fake news media” had led people to want to belong to the President’s camp “not only because it aligns with what they want to believe in, but also because they think it is prestigious and legitimises their behaviours”.

“That leads to radical behaviour, bullying, and actions like denying press entry or canceling passes,” she said.

But Alencar argued that there was a strong disconnect between the rhetoric of President-elect Bolsonaro and the beliefs of many Brazilians who consider their natural environment an important part of their national identity.

“Lots of people have not made that connection between climate change and the debate around land use for example. And these times of ‘fake news’ have done nothing to help”, she said.

For Kingsmill Bond, energy strategist at Climate Tracker, technological progress will be the silver lining for hitting back at climate denialism.

Describing himself as an optimist, Bond argued that the transition to a zero-carbon world will be driven by technology and that the ideological debate that feeds climate science denial will have to come to an end when financial markets choose to embrace new, cleaner and cheaper technologies.

“In the long-term, the financial market is a weighing machine,” he said. “The markets are trying to get things right without being focused on an ideological bias.

“It’s all well and good for people to say that they don’t believe in climate change and the energy transition. But ultimately, this technology is faster, cleaner and cheaper and it will win.

“In 90 percent of the world, new renewable energy is cheaper than new coal plants and prices will continue to fall with additional capacity. In 2013, the US led the world in the implementation of wind, solar and electric vehicles. But over the last three years, they have been overtaken by the Chinese. Those who fail to adapt will be left behind,” he said.

From Denial to Disinformation

While fringe climate science denial views are struggling for mainstream traction, in and around the negotiations climate disinformation continues to be used by fossil fuel organisations and lobbyists as a powerful tool to undermine climate action.

Bond acknowledged that there were “powerful vested interests at work to maintain the status quo and delay climate action — with an estimated $25 trillion invested in fossil fuel assets around the world.

However, he argued that while climate experts and campaigners had spent the past 15 years fighting climate science denial, “that battle has now been won”.

“The next battle might be against energy transition denial. There is a real debate about how to achieve this transition and that is a valuable one. But in the meantime, there are lots of incorrect statements and bogus arguments being made about it,” he said. 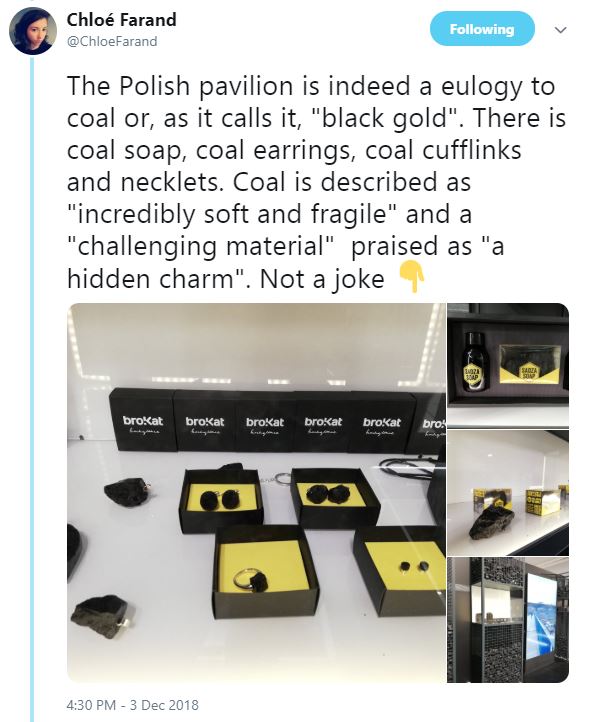 Bragg, from Corporate Accountability, warned that while denial might not carry much weight within the global climate negotiations, there remained a “massive amount of disinformation in the talks” with industry lobbyists pushing “false solutions that will allow them to continue to pollute”.

Some of the solutions regularly promoted by the fossil fuel industry include the use of gas as a “bridging fuel” in the energy transition; the deployment of technologies such as carbon capture and storage (CCS), which captures carbon dioxide from power plants and buries it in the ground; and geoengineering, which aims to remove carbon dioxide from the atmosphere.

However, none of these technologies have yet been proven to work commercially and at scale.

Instead, Caldas said fossil fuel companies have found “subtler, more insidious ways to distort climate science and deceive the public” by relying on trade associations and lobby groups which “spread disinformation about climate science and seek to block climate action” while “allowing  companies to justify their business-as-usual practices”.