Campaigners and activists from around the world took part in the March for Climate, which marked the end of the first of two weeks of global climate negotiations in Katowice.

Protesters chanted “keep the coal in the hole”, urged negotiators to “wake-up”, and demanded “climate justice now” while waving colourful banners and flags. Some were also wearing pollution masks to highlight Katowice’s heavily polluted air due to local coal mining. 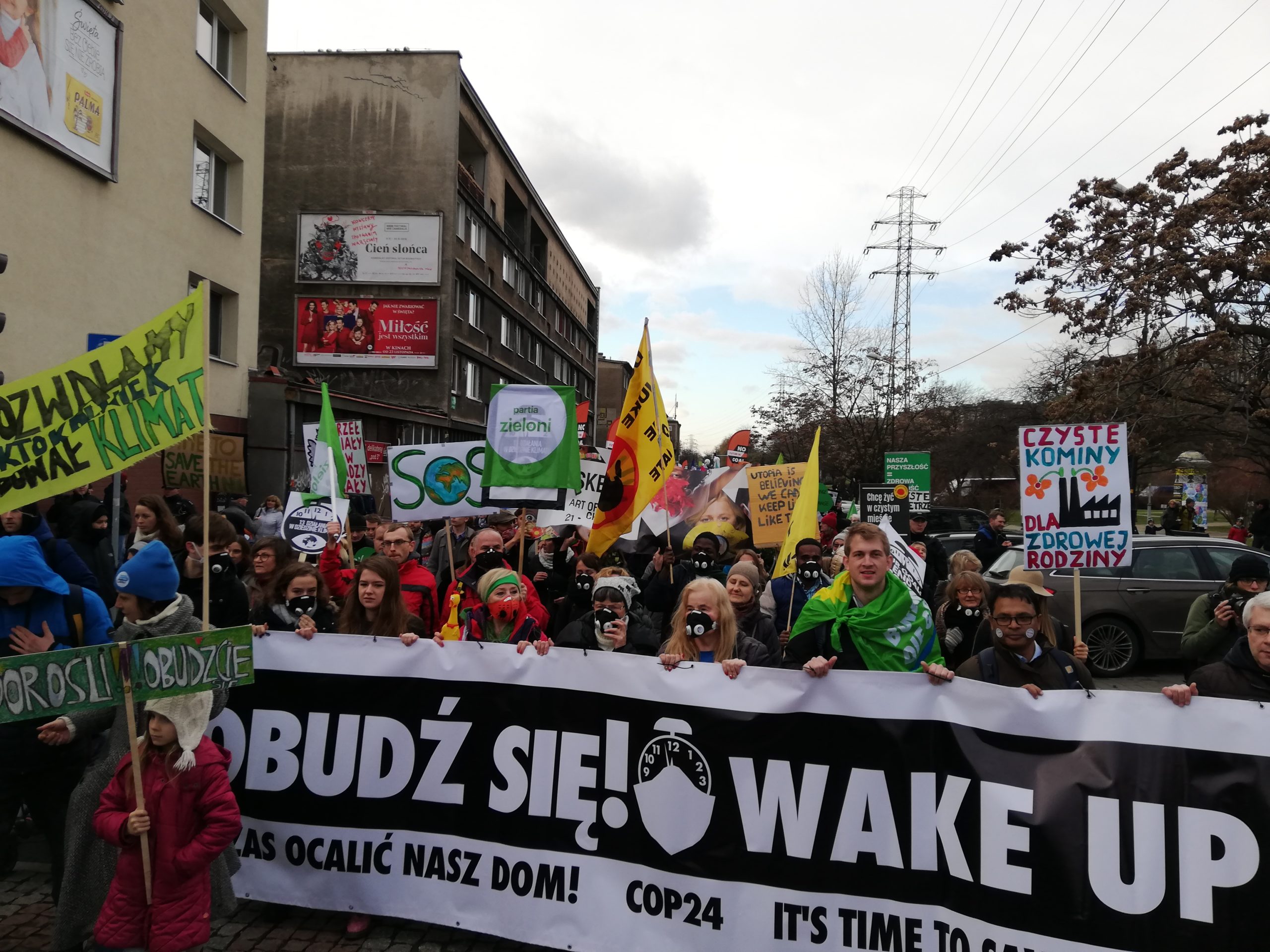 Katowice is located in the region of Silesia, Poland’s coal heartland. About 80 percent of Poland’s electricity currently comes from coal.

Although the march was overwhelmingly peaceful, it was dominated by the presence of hundreds of riot police holding shields, batons, guns and tear gas canisters.

Police surrounded the march as protesters worked through the city with large groups of officers waiting at each junction and road crossing along the way.

The march was stopped in front of the conference centre where negotiations were taking place after a Polish group of anarchists and anti-fascists walking at the back of the demonstration were kettled by police. No further details as to the reason for this were available at the time of writing. 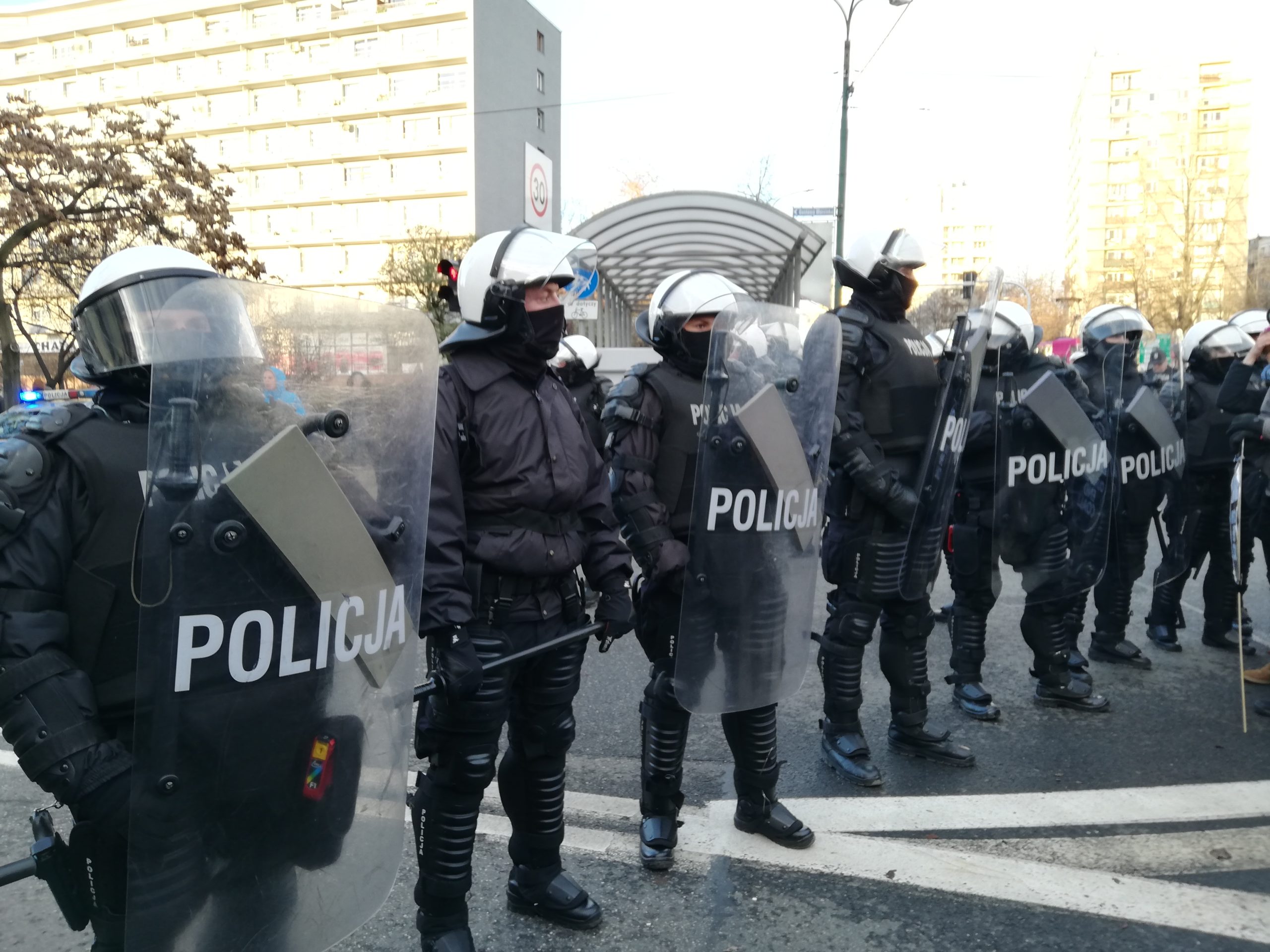 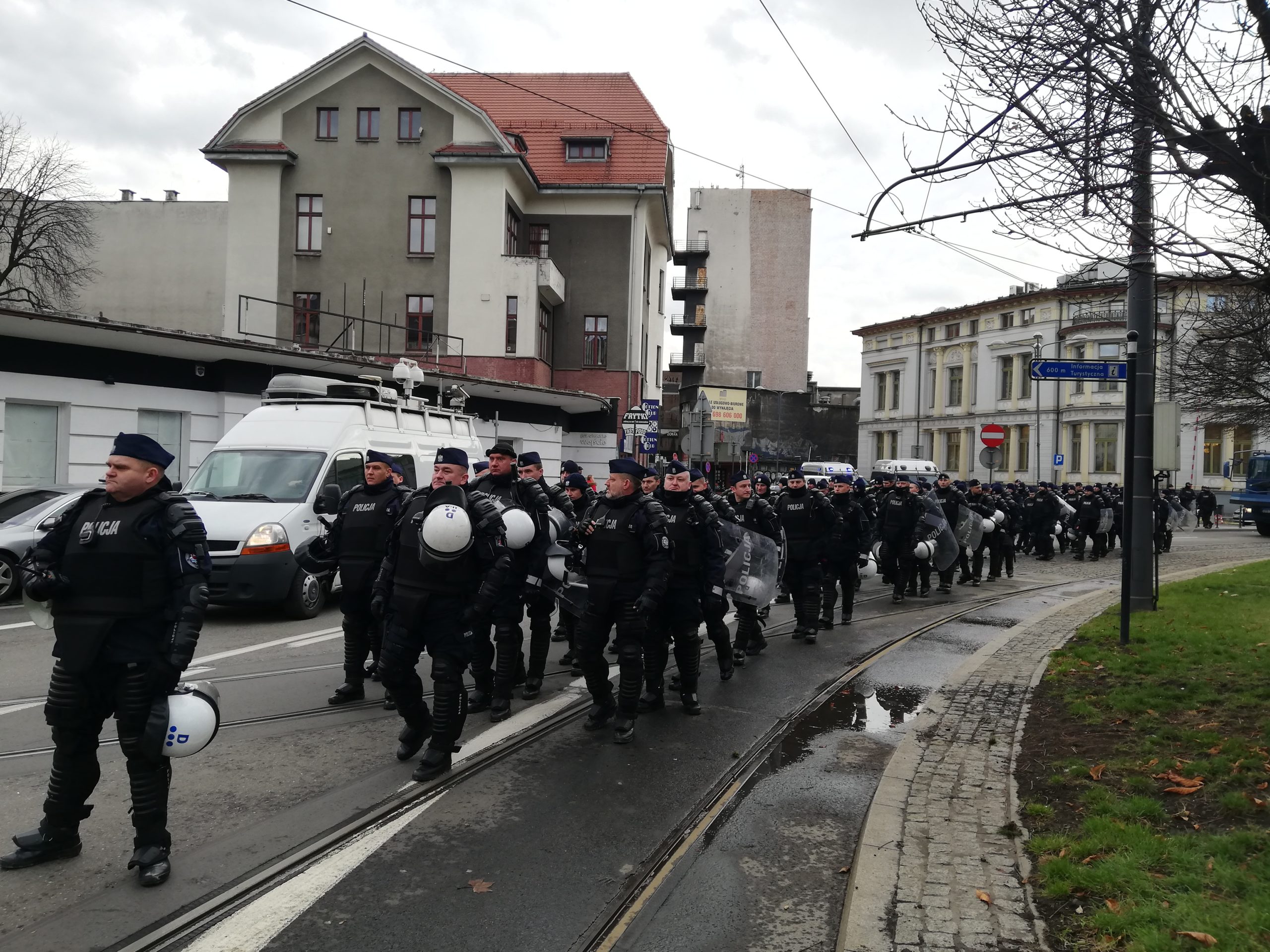 The heavy police presence did not deter climate campaigners.

Two huge puppets representing Brazilian President-elect Jair Bolsonaro, who threatened to quit the Paris Agreement and roll back environmental protection in the Amazon, and the figure of an indigenous woman rose above the crowd.

Angeline Pittenger, the American artist who made the puppets, said her work stood in solidarity with women’s groups of colour, who will be affected by Bolsonaro’s policies. “I wanted to create a female hero,” she said. 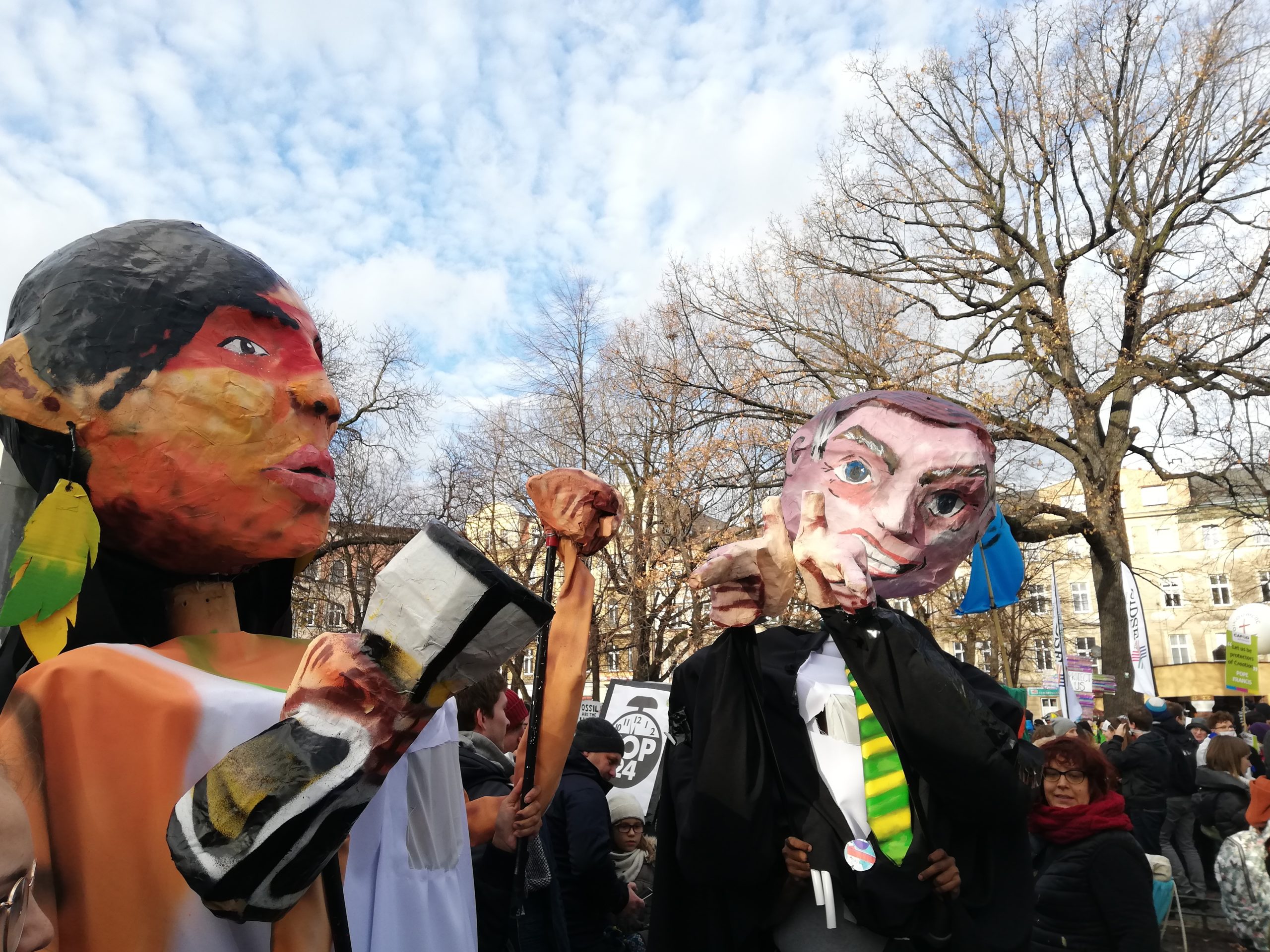 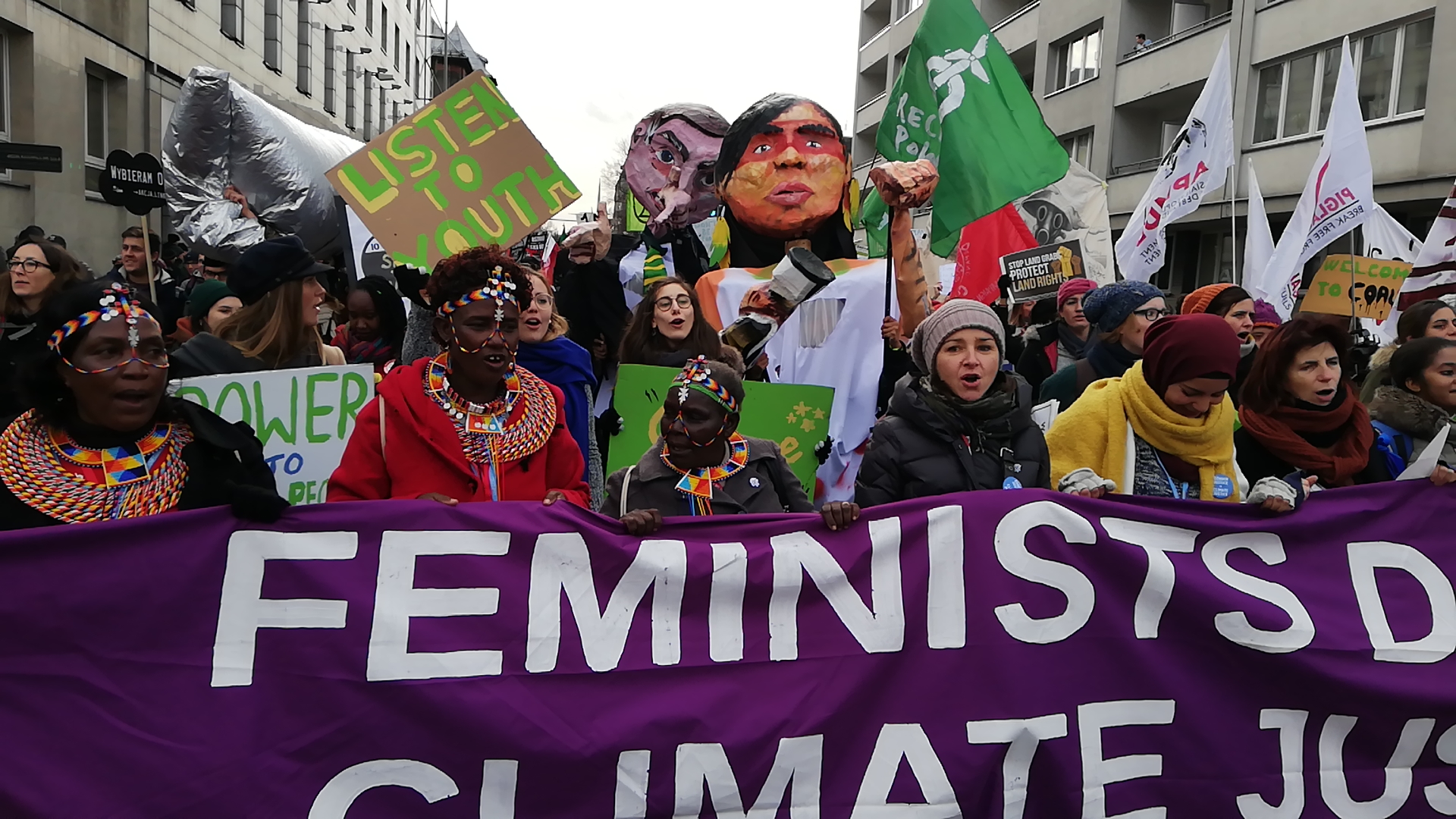 Several anti-coal groups from Poland and Germany were among those to march through the city.

A spokesman from Polish group Oboz Dla Klimatu, who preferred not to be named, said the group wanted to bring the issue of climate justice to Poland, adding that “more and more people are aware of climate change in Poland and are demanding a coal phase-out”.

Sandra Koch, from the “citizens’ initiative for clean air” in the north-western coal region of East Frisia, said: “Germany has signed the Paris Agreement but it doing nothing to reduce emissions and achieve its climate targets.

Dressed as a plague doctor with a long beak-shaped mask, she added: “Politicians are like plague doctors, they are not helping at all.”

“I understand that coal workers are afraid to lose their jobs. But it is the job of politicians to ensure that the change happens bit by bit. We need a system change, not climate change,” she said.

Wolfgang Eber and Wolfgang Loebnitz, two retired Germans, walked from Bonn to Berlin to demand their government phase-out coal before continuing their journey to Katowice. Along the way, more than 10,000 people and 17 organisations joined them for a part of their journey.

“Walking to the climate talks is symbolic,” said Eber. “And along the way, we were able to talk to people about climate change and give them suggestions and ideas about how to change their lifestyle and take action to try and save our planet.”

Others had come from much further away. Ezekiel Adigbe, from Benin, in West Africa, came to Katowice with a youth catholic group.

“We have come all this way because it is paramount that we work together to protect our environment and preserve it for the future,” he said. 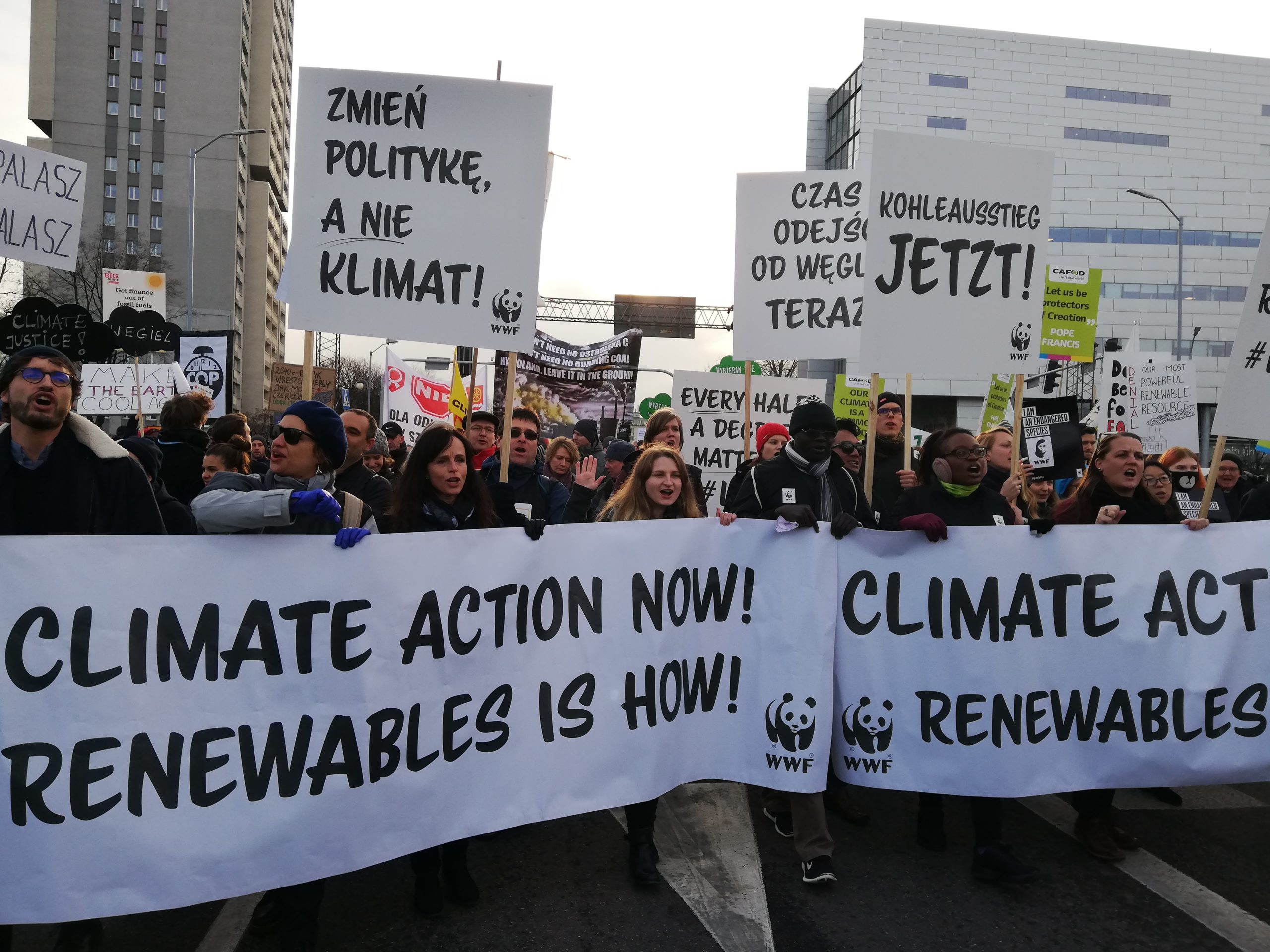 The heavy police presence in Katowice comes after the Polish Prime Minister Mateusz Morawiecki signed an order declaring an ALFA alert — the first of four increasing terrorism security levels — across the entire southern province of Silesia and the city of Krakow for the duration of the climate talks.

The March for Climate had been given permission by the authorities, but a ban on all spontaneous protests continues to apply in Katowice until December 15.

Earlier this year, DeSmog UK revealed that the Polish Parliament approved a bill that provides a raft of initiatives to “ensure safety and public order” during talks and allows police to “collect, obtain, process and use information, including personal data about people registered as participants”. 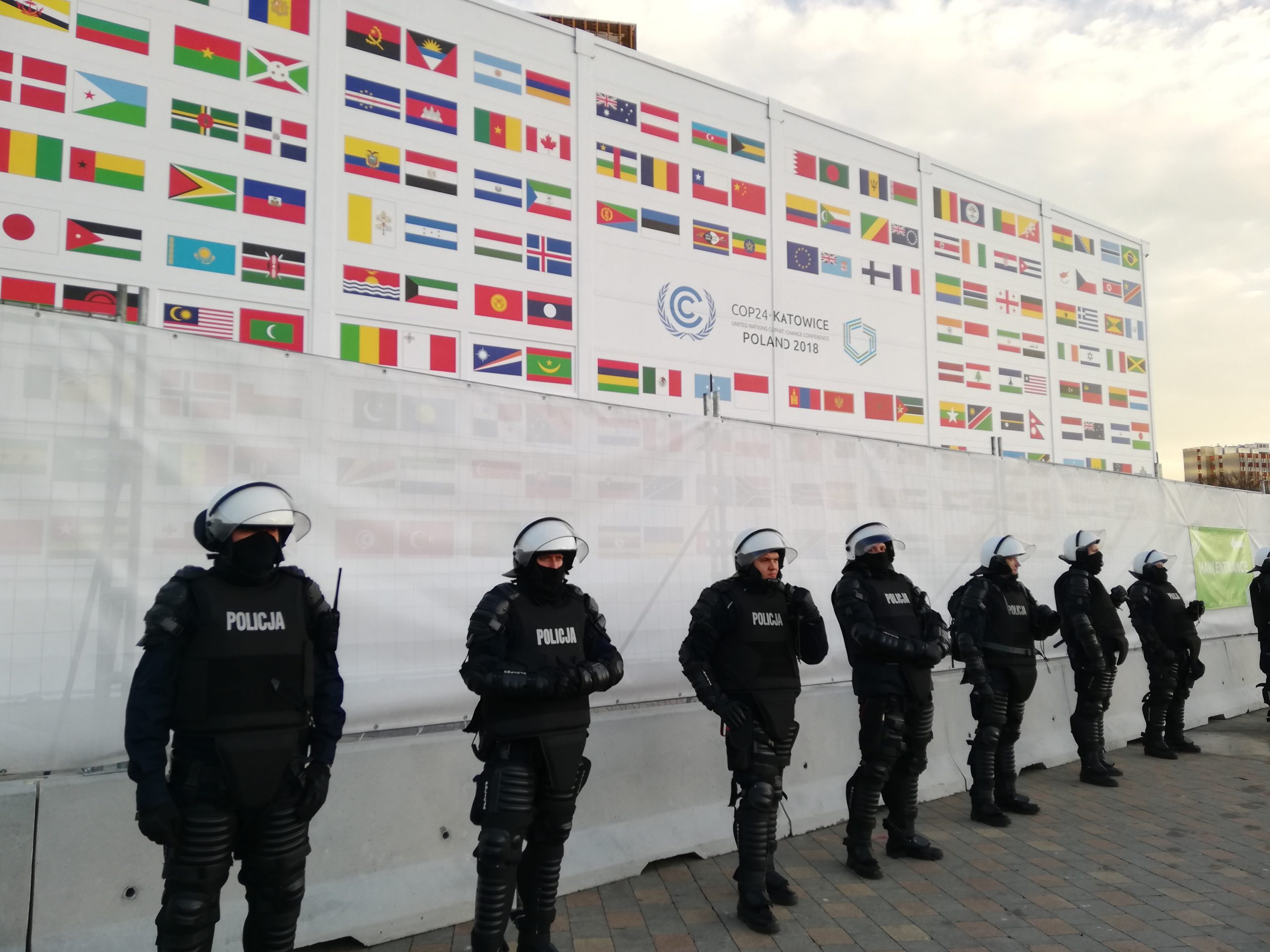 Police checks have also been carried out at Poland’s borders and members of the Climate Action Network (CAN) claimed that least 12 climate activists who were due to attend the climate talks have been denied entry at the Polish border or deported.

In a statement, Human Rights Watch said it was aware of the issue and that all NGO representatives that were prevented to enter Poland had valid visas and UN accreditation.

Stephan Singer, from CAN, said this was “not isolated instances” and described the situation as “extremely worrying”.

“The full and effective participation by civil society [to the climate talks] is entrenched in the UN convention and in fact is imperative in our efforts to urgently transition to a new climate regime,” he said.

This years climate summit, known as COP24, is widely considered to be the most important climate meeting since 2015 as countries aim to finalise the rulebook to implement the Paris Agreement.

In a statement, they warned that “ongoing restrictions on civil society will not stop a resilient climate movement.” 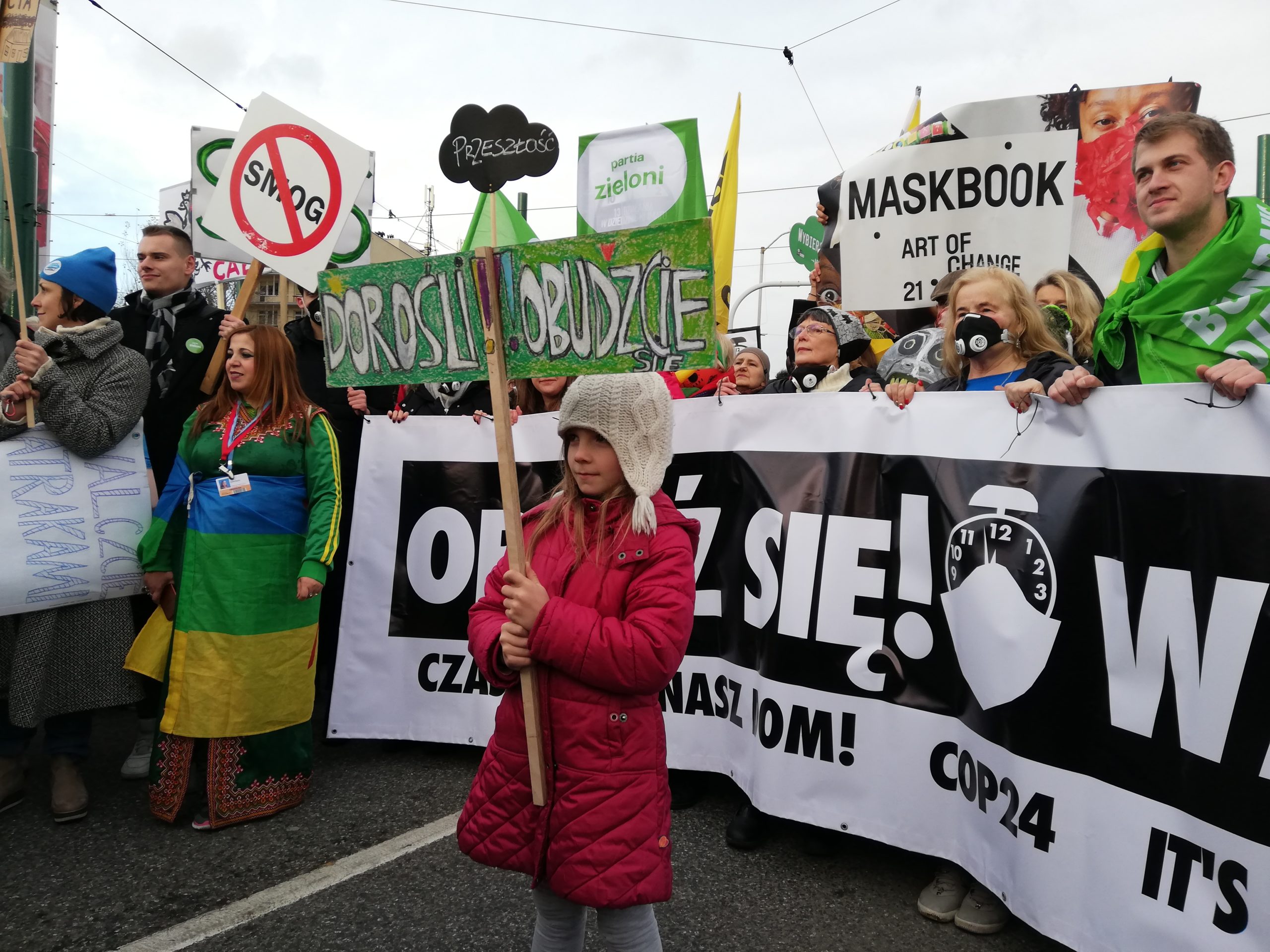