Inside the Tent: Big Polluters Work to Shape Paris Agreement Rules at the UN Climate Talks

Should fossil fuel companies that knew their products contributed to climate change for nearly 40 years and did nothing about it now be allowed to have their say inside the UN climate talks?

For the International Emissions Trading Association (IETA), a business lobby comprised of some of the world’s largest fossil fuel producers and greenhouse gas emitters such as BP, Chevron, Rio Tinto, Eni, Total and Shell, the answer is yes.

“Fundamentally,” the IETA writes, “we believe that our businesses should be part of the climate negotiations — because we intend to be part of the solution”.

IETA has already wielded much influence on the UN climate talks. This year’s climate conference — known as COP24 — is widely considered to be the most important climate meeting of the last three years, with countries aiming to finalise the rulebook to implement the Paris Agreement.

And the business lobby is determined to have its voice heard on how its members should be involved in implementing the Paris accord.

IETA president and CEO Dirk Forrister told DeSmog UK that proposals made by IETA on market approaches to implement the Paris Agreement had found their way into the negotiation text.

“I think most of the ideas that we think are important for the market credibility are in the [negotiating] text,” he said.

He added that IETA has been working for more than six years on pushing for carbon markets mechanisms inside the climate talks — an issue which remains a priority for its members.

Speaking at an event on the fringe of the conference, Shell’s chief climate change adviser David Hone boasted about the fact Shell, through IETA, could “take some credit” for the fact that carbon unit trading had been adopted in the Paris Agreement.

Confidential documents have previously revealed that Shell’s board of directors knew that its products contributed to climate change since 1988 — but for years did nothing about it.

For environmental activists, the idea that Shell could have influenced some of the outcomes of the Paris Agreement is unacceptable and have repeatedly campaigned to “kick the polluters out of the COP”.

Speaking near IETA’s large pavilion inside the conference centre, Nnimmo Bassey, from the Health of Mother Earth Foundation, read a poem about the devastating consequences of oil pollution in the Niger Delta, Nigeria, due to Shell’s activities in the region.

“In Niger Delta where I come from, we have endured 60 years of oil pollution. Today the world has 12 short years to do the right thing about climate change,” he said.

“We don’t want those who have contributed to climate change to be making the solutions. Today oil, coal and gas companies populate the corridors of the negotiations of COP24. These companies should be clearly kept away from the negotiations. We don’t need them here.”

“Living in the Niger Delta is like hell on earth because of the oil pollution. So having these big polluters [Shell] at the climate talks is a slap on mother Earth.” #COP24 pic.twitter.com/KtC7QjLN8x

But IETA’s CEO Forrister is adamant: “Companies which are large emitters such as Shell need to be inside the tent and be part of forming solutions”.

IETA is open about its lobbying efforts. It publishes its priorities and proposals on its website and sets-out how it “plays a valuable role” on behalf of its members at the talks — a strategy IETA’s CEO Forrister says is no different to what NGOs are doing.

But for NGOs, the comparison has little credibility. “This is not a level playing field,” said Gilles Dufrasne, policy research for NGO Carbon Market Watch, who pointed out that big companies’ lobbying efforts were backed by huge profits, with companies seeking bigger profits still.

Inside the conference, the involvement of big polluters is unabashed. One of Europe’s largest coal companies is sponsoring the talks and a host of oil and gas companies are also wiedling influence behind the green veneer.

Meanwhile, dozens of country delegates from the US, Saudi Arabia and Kuwait — four countries which blocked the “welcoming” of the UN Intergovernmental Panel on Climate Chang’s landmark 1.5 degree report — have ties to the oil, gas and mining industries.

For campaigners, this underlines the imperative of dealing with conflicts of interests at the talks. “The real issue is when corporate lobbying is hidden behind official country representation,” Dufrasne said.

Jesse Bragg, spokesman at NGO Corporate Accountability, described the involvement of the fossil fuel industry in the negotiations as “the wild west”.

“There is no transparency over what the industry’s engagement in this process looks like,” he said. “The fossil fuel industry needed to write themselves in a clause in order to be engaged.” 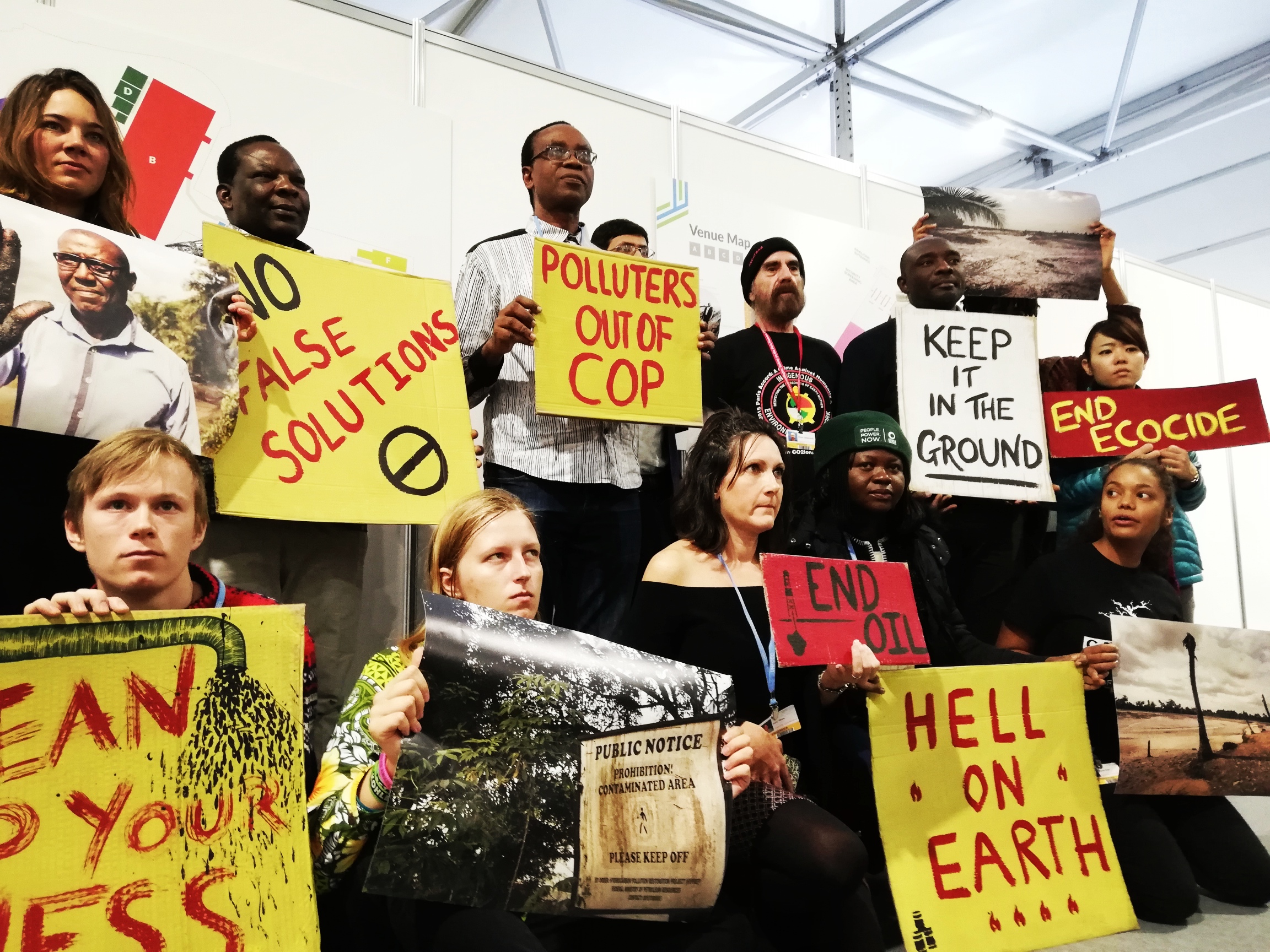 For Forrister, the assessment is “unfair”. “I think that everybody who comes to the [UN climate talks] with a badge is trying to influence the process, hopefully to the good,” he said.

“At the end of the day, decisions are made by elected officials and governments that have that representative role. We are not at the microphones negotiating text, that is a government function,” he said.

Bragg recognised that IETA had its place in implementing of the Paris Agreement but that role should not involve having a say in the decision-making process.

“There are things that fossil fuel companies should be made to do but they should not be writing the rules. The danger is that they are going to skew the talks towards their agenda,” he said.

Dufrasne, from Carbon Market Watch, agreed: “There is a moral question here, which is about the involvement of the fossil fuel industry in contributing and influencing a deal [Paris Agreement] which is incompatible with the future of their industry.”

“How can they genuinely claim to support climate action when it is incompatible with their own future?” 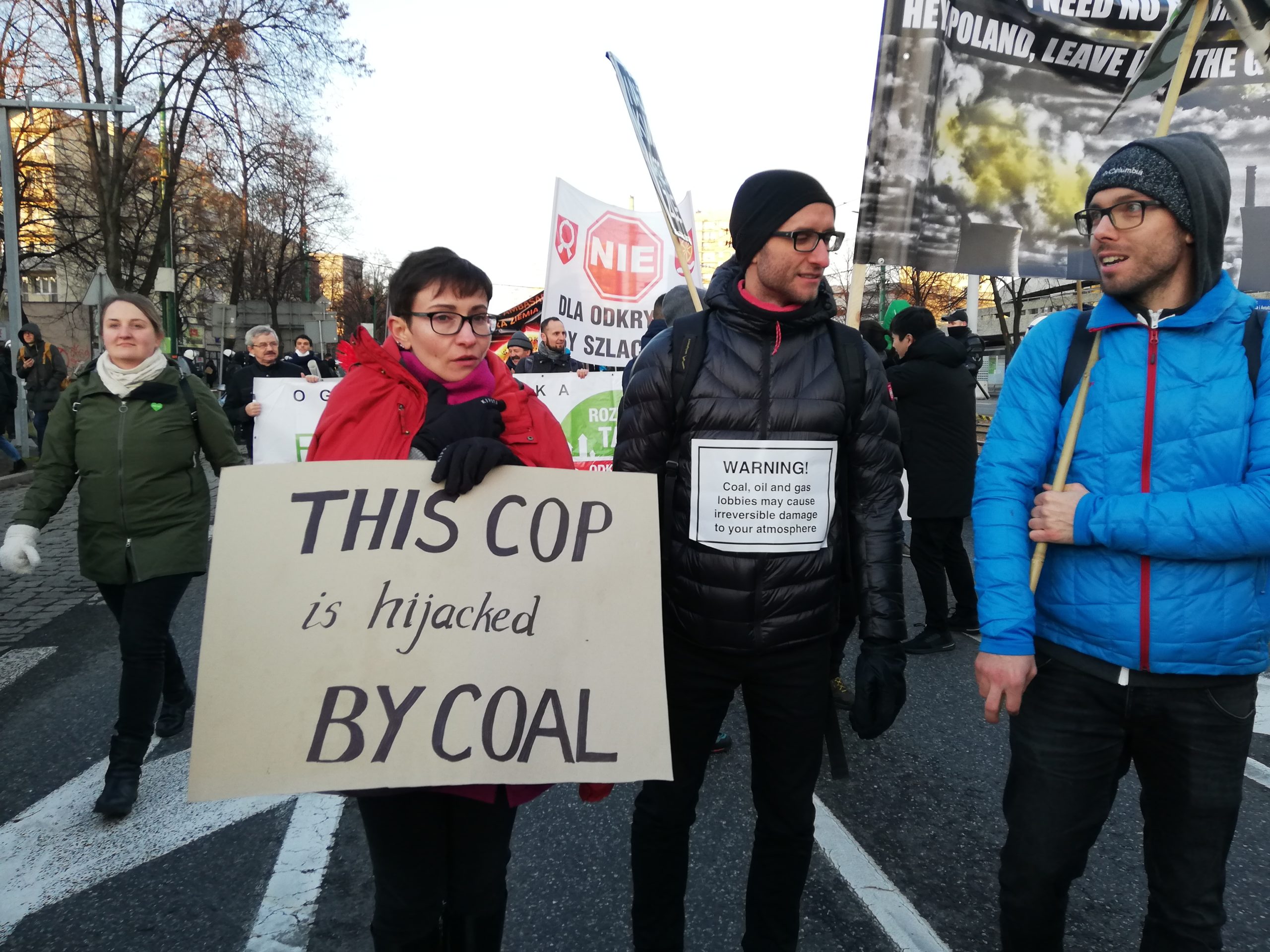 Protesters taking part in the March for Climate in Katowice, where the UN climate talks are taking place. Image credit: Chloe Farand

The private sector’s efforts to shape parts of the Paris Accord has focused around one specific area of the agreement, known as Article 6, which allows oil companies, major polluters and countries to reduce their emissions by buying credits for emissions reduction that are happening elsewhere.

Brad Schallert, deputy director of international climate cooperation at WWF, said industry was getting involved on the carbon market side of the negotiations because it was allowing them to reduce emissions at cheaper costs than they would otherwise.

Schallert explained that in theory, these carbon market mechanisms allow countries to reinvest the money they saved by using the mechanism into other emission reduction measures, helping them to ramp up ambitions.

Within Article 6, there is an effort to ensure that carbon markets go beyond a zero-sum game and actually contribute to “overall mitigation to global emissions”.

How this applies in practice is yet to be defined but the idea is to ensure that not all carbon emissions reductions can be traded, and that some amount is set aside to ensure there is a real reduction.

Schallert told DeSmog UK that industry had been pushing for voluntary cancellation of some carbon credits in the market — which would allow them to “legitimise the claim that they are contributing to climate change mitigation” without being answerable to specific rules on climate action.

Dufrasne, from Carbon Market Watch, acknowledged that IETA had at times contributed positively to the negotiations on carbon markets. Yet, he warned that fossil fuel companies pushing for carbon markets was “a way to reduce emissions and meet their target without doing anything else”.

“It’s a kind of false commitment. It is used to replace climate action. What they’re saying is ‘put a price on carbon and we will find the cheapest way to deliver energy’ without further regulation on their activities,” he said.

If IETA wants to be engaged in shaping the rules of the Paris Agreement within the UN process, it is less keen to have to follow the UN’s rules.

Rejecting current proposals for UN oversight of market approaches to implement the Paris Agreement, Forrister said “there are things that go too far”, adding that “including UN level safeguards and restrictions might not be good ideas”.

“We think that should be a national matter rather than a UN one,” he said.

For Bragg, divorcing carbon market mechanisms from the UN process is “unacceptable”.

“They want to write the rules and get to be the referee,” Bragg said. “For carbon markets to be effective in this process, it needs to be tightly regulated and have strong standards.”

The level of influence of trade lobby groups such as IETA is difficult to assess and at time of writing, as the text on market approaches to implement the Paris Agreement remains on the negotiating table.

But the question about fossil fuel companies involvement remains.

Citing the pro-climate action American group “We are still in” which is largely backed by businesses, WWF’s Schallert said that the private sector has a role to play in ramping up ambition and can “fill a void where the UN process is not doing enough”.

On the other hand, Bragg, from Corporate Accountability, warned that one should remember “what companies such as Shell and ExxonMobil have done to prove to us that they are in this for the right reasons versus what they have done to undermine climate policy”.