Nigel Lawson, the founder of the climate science denial group the Global Warming Policy Foundation, has announced that he is stepping down as the group’s chairman.

Lawson, who served as Chancellor of the Exchequer under Margaret Thatcher’s government, led the UK’s most prominent climate science denial campaign group for a decade.

He announced his resignation at a meeting of the GWPF’s board of trustees during which he said that since establishing the group in 2009, it had become “a prominent force in the climate policy debate” and that it was now “stronger than ever”.

Lawson, who will turn 87 in March, will remain affiliated to the GWPF as its honorary president.

Launching the GWPF in 2009, Lawson argued in a column in The Times that it was morally wrong to “force the world’s poorest countries to cut carbon emissions”. 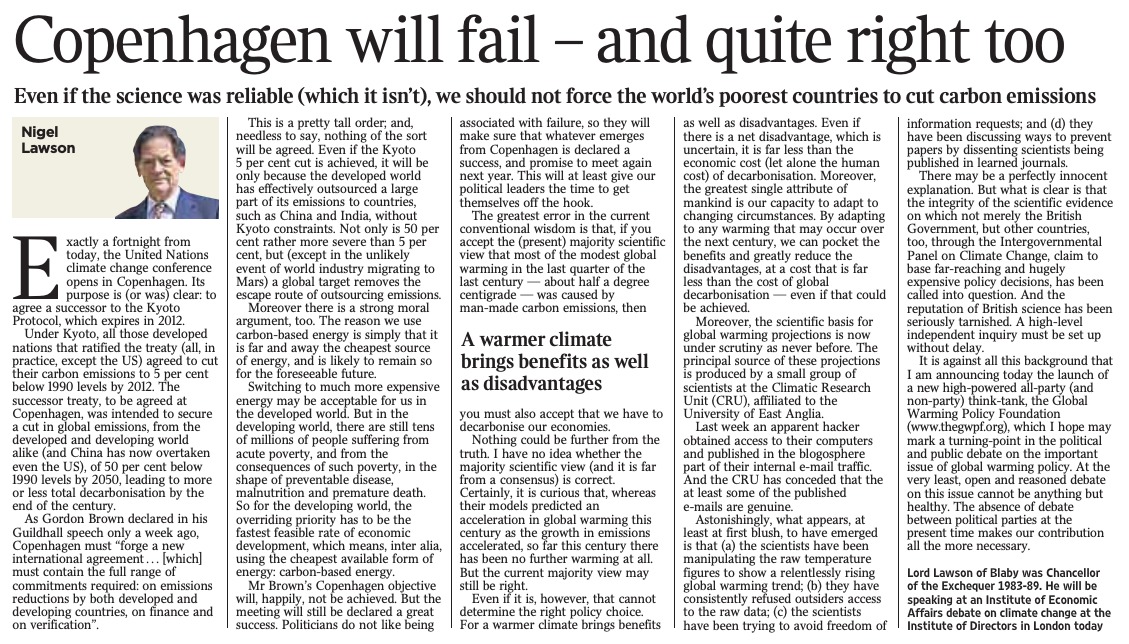 Lawson has repeatedly spread disinformation about climate science in newspaper columns and regular media appearances. In October 2017, the BBC apologised and admitted Lawson “should have been challenged” over incorrect statements he made on the BBC’s flagship Today programme.

In October 2018, broadcast regulator Ofcom found that Lawson’s statement on the Today programme was “neither correct or sufficiently challenged during the interview or subsequently during the programme”.

The GWPF said Bernard Donoughue, a life peer in the House of Lords who has been a member of the GWPF’s board of trustees since the group’s foundation, will replace Lawson as the group’s chairman.

Donoughue served as a junior minister for the Department of Agriculture, Food and Fisheries under Tony Blair’s government and as a senior advisor to Prime Minister Harold Wilson and Jim Callaghan.

Former Prime Minister David Cameron once quoted Donoughue’s objection to the landmark Climate Change Act on cost terms as a reason for the Conservative party to oppose a 2030 decarbonisation target.

The GWPF is based at an office at 55 Tufton Street, near Westminster, which is also home to a host of right-wing liberal organisations and pro-Brexit groups, including the TaxPayers’ Alliance, Leave Means Leave, IFT (previously Institute for Free Trade) and the Centre for Policy Studies.

The GWPF has also announced that economist Ruth Lea will join the group’s board of trustees. Lea also serves as a regulation fellow for the opaquely-funded right-wing Institute of Economic Affairs (IEA) think tank and sits on the advisory council of the low-tax campaign group the TaxPayers’ Alliance, which was founded by Vote Leave CEO Matthew Elliott.

Martin Jacomb, one of the founding members of the GWPF’s board of trustees, is also standing down from his position.