As the world’s rich and powerful gather in Davos for the World Economic Forum (WEF), the threats to the global economy caused by environmental disasters and climate change are set to be high on the agenda.

Attended by David Attenborough, 15-year-old school strike activist Greta Thunberg and Bank of England Governor Mark Carney, this year’s WEF conference will hear from influential voices which have repeatedly warned that time for world leaders to address climate change is running out.

But the fossil fuel industry continues to be a guest of honour at the meeting, with some of the world’s largest oil, gas and mining companies having a say in shaping the forum’s agenda and sitting on the conference’s front bench as “strategic partners”.

Here’s a run down of what to watch.

For the third year in a row, environmental risks dominated the influential World Economic Forum (WEF) Global Risks report, which is published annually ahead of the summit in the Swiss ski resort. The report gave a stark warning that the world is “most clearly sleepwalking into catastrophe”.

Environmental challenges have long been relegated to the fringes of the WEF summit. But in recent years, the intensification and higher frequency of extreme weather events has seen the issue raise to the top of the agenda.

According to the report, four of the five most impactful global risks relate to climate change. Extreme weather events and the failure of climate change mitigation and adaptation policy are ranked first and second as the most likely threat facing the global economy, and second and third for risks with the greatest impact mdash; behind only weapons of mass destruction.

The report warned that increasing geopolitical and economic tensions could hold back efforts to tackle escalating climate change threats. It also denounced the lack of progress of environmental policy and warned that the risks associated with climate inaction are “becoming increasingly clear”.

Commenting on the findings, Greenpeace Executive Director Jennifer Morgan, also a speaker at this year’s WEF conference, warned that “climate emergency must dominate” the gathering.

“The Davos ‘elite’ are still pretending we have time to fix the climate crisis. We don’t. We have already entered into a new phase of climate change, one in which the impacts are coming faster, with greater intensity, and where we must act immediately,” she added.

Morgan urged attendees to consider technology and the dawn of the “Fourth Industrial Revolution” — one of the summit’s central themes — as a way to “totally reimagine the way we approach solutions to the climate crisis” only if “this revolution is in service of solving climate change”.

She warned that technology should not “stop those who are culpable in failing to curb greenhouse gas emission from taking simple action now”.

In the age of rising populism and the rejection of the scientific consensus on climate change by Donald Trump and Jair Bolsonaro, the conference also includes a panel discussion on ways to bridge the increasing divide between scientific evidence and public opinion.

While neither Donald Trump, Emmanuel Macron, nor Theresa May (who has more pressing threats to solve at home) are expected to attend Davos this year, Bolsonaro, who was sworn in as Brazil’s President earlier this month, will be one of the star attractions.

Bolsonaro has expressed his intention to align Brazil to the politics of the Trump administration. He appointed a Brazilian foreign minister who believes climate change is part of a “cultural Marxists” plot to stifle western economies and pledged to open up the Amazon to miners, farmers and construction companies.

Despite concerns about the risks posed by climate change, the summit is known for its polluting extravagance. Last year, 982 private jets set off to the Davos summit — a nine percent increase from 2017, according to global aviation service company Air Partner. The company estimates the price for a private jet from London to Zurich to be around £8,000 for a six-seater light jet. 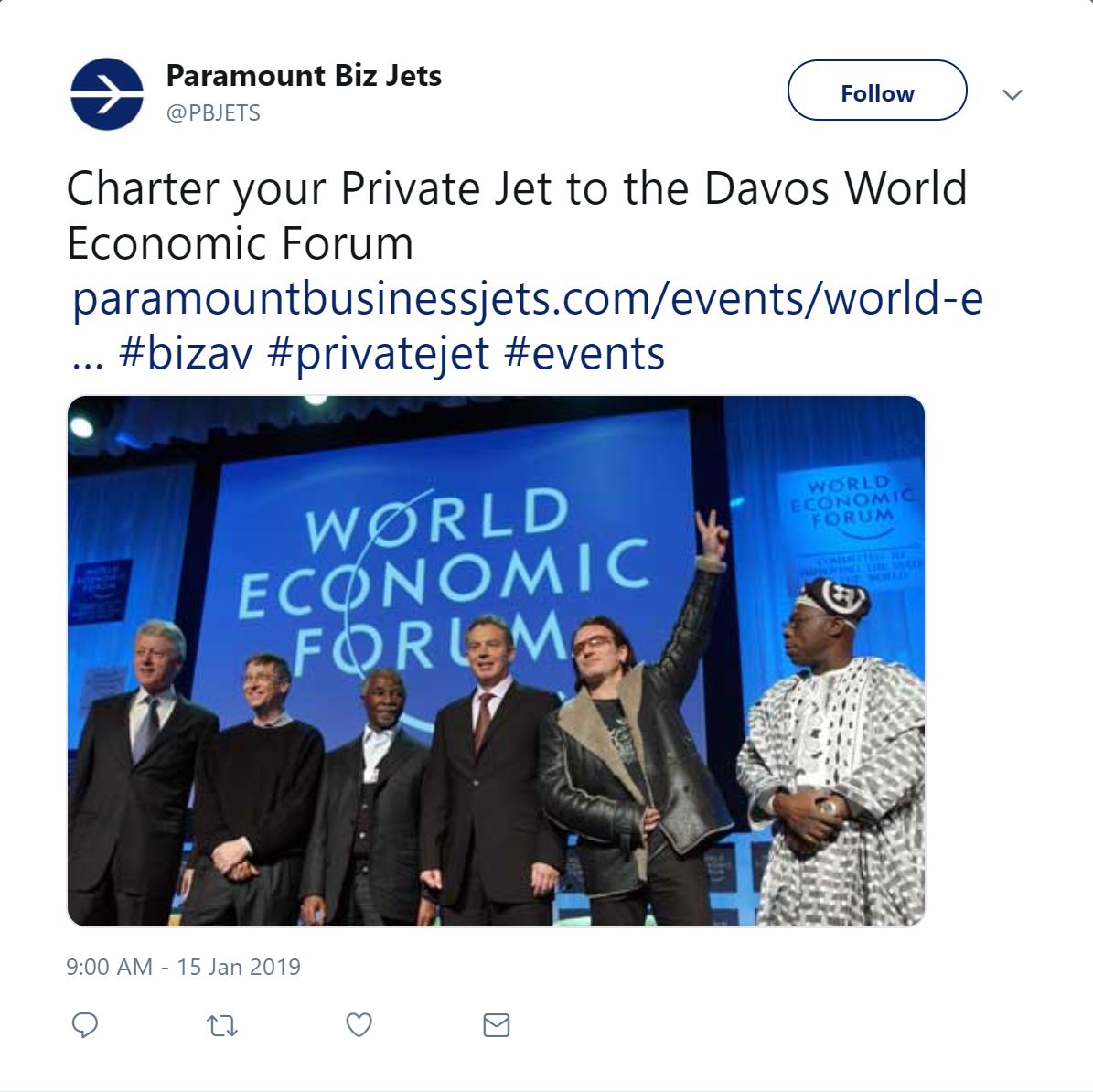 But not everyone will be travelling to Davos in a private jet. Teenage climate activist Greta Thunberg said she would make the journey to and from her home in Sweden on the train. 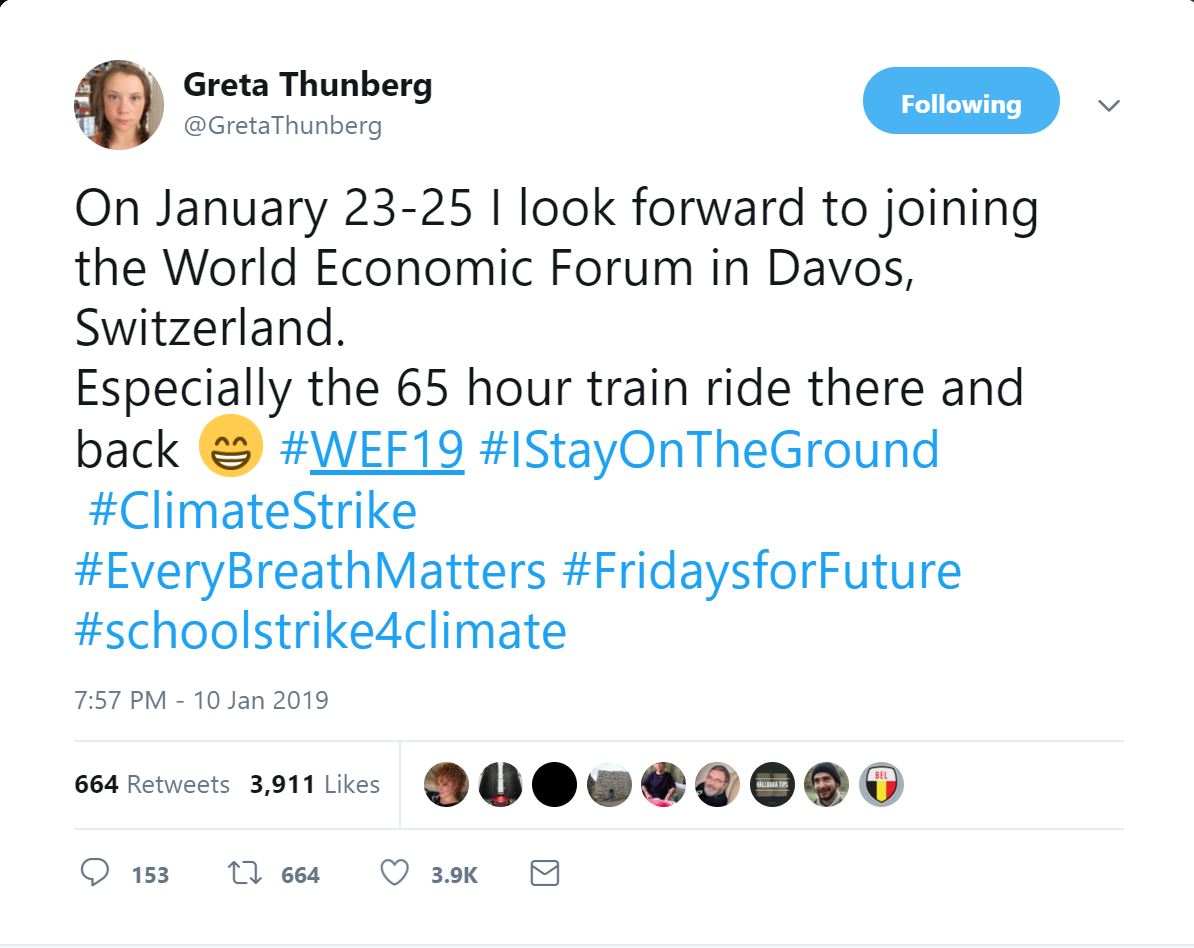 Thunberg is expected to take part in the Arctic Basecamp, which include a series of events with

scientists, policymakers and campaigners on the fringe of the summit. She will speak alongside Christiana Figueres, former executive secretary of the UNFCCC (now known as UN Climate Change).

But the fossil fuel industry remains a key player on the Davos stage.

Patrick Pouyanné, CEO of Total, and Iain Conn, CEO of the Centrica Group, are both listed as main speakers at the conference. In the UK, Centrica has invested millions into the burgeoning fracking industry.

A total of 100 global companies benefit from the “strategic partner” status at the WEF. According to the WEF website, these companies provide “essential leadership to support the WEF’s mission of improving the state of the world” and “shape the future through extensive contribution to developing and implementing WEF projects and championing public-private dialogue”.

CEOs of companies which benefit from this status are “personally involved in decision-making and shaping many WEF initiatives” — while the most senior executives are also able to participate on steering boards and in advisory groups.