Opposition to Fracking Increases over Earthquake and Environmental Concerns

By Ruth Hayhurst for Drill or Drop

Opposition to fracking has risen to near record levels in the latest government public attitudes survey with a big increase in concern about earthquakes. Support for fracking fell to a joint record low.

The Wave tracker survey, conducted in December 2018, was the first to reflect reaction to fracking at Cuadrilla’s shale gas site at Preston New Road. By the end of the survey period, operations at the site near Blackpool had induced 57 seismic events.

A government-commissioned report, which likened some of the tremors to a bag of flour dropping on the floor and predated the survey, appears not to have reassured participants.

Yesterday, Cuadrilla called for a review of the rules on fracking induced-earthquakes, arguing that it may not be commercially-viable to extract shale gas from Preston New Road within the current limits.

The latest survey, published this morning, also bucked the trend of previous years, which saw a rise in support for fracking and fall in opposition in the winter.

Strong opposition was 13 percent, up one percentage point on the previous survey but down from 16 percent on the results from a year before. 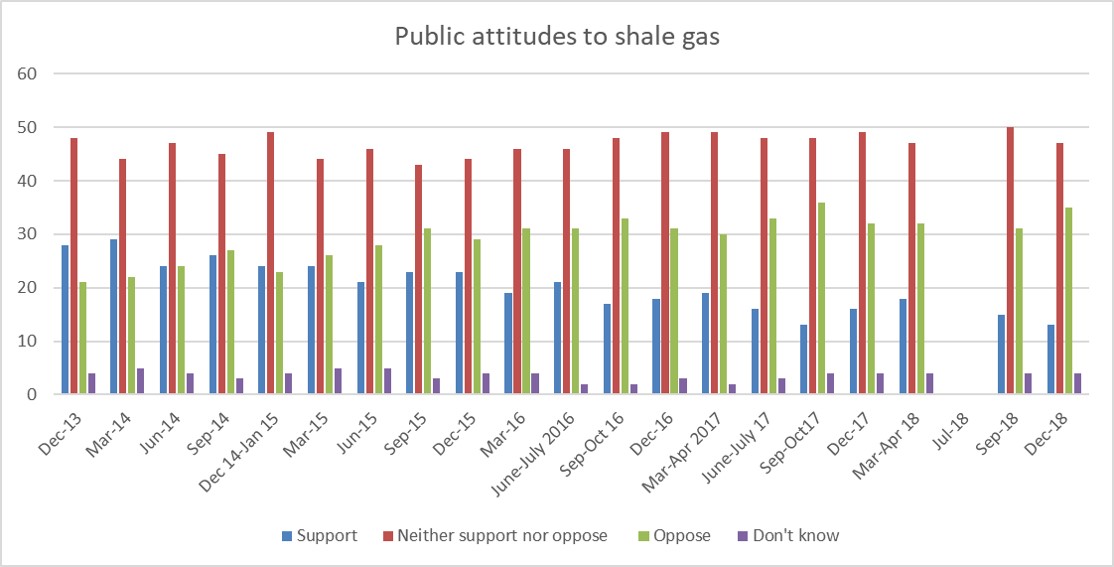 As in previous surveys, the more people said they knew about fracking the more likely they were to oppose it. In the latest survey, of those who claimed to know a lot about fracking, 66% opposed and 20 percent supported it.

The main reasons why people opposed fracking were:

Total support for fracking fell to 13 percent. This is the lowest level recorded in the survey so far, also reached in September 2017.

The latest figure was down from 15 percent in the previous survey in September 2018 and 16 percentfor the same time a year before.

The gap between support and opposition has increased again. It is now one percentage point short of the record in September 2017.

The main reasons people gave for supporting fracking were:

47 percent of participants neither supported nor opposed fracking. This was back down to a level in March 2018, following an increase to 50 percent in the previous survey. The main reason given was “don’t know enough about it”.

4 percent said they did not know whether they supported or opposed, unchanged on the previous survey.

78 percent of participants were aware of fracking for shale gas. This is the same level as in July 2018 and up slightly from the previous survey.

“The Government has today met its obligation to protect our environment and the public, by refusing to entertain the desperate calls by industry for a relaxation of regulations on seismic activity as a result of fracking.

“It must now take this damning evidence that fracking does not have the support of the public into consideration as it makes its decision on proposals to fast-track fracking. Perusing this plan would defy local democracy and remove the voices of local communities in decisions over fracking proposals in their area.”

“The increased opposition to fracking and drop in support comes as no surprise, considering the large number of seismic events which have been experienced since fracking resumed on the Fylde Coast. Fracking’s unpopularity will also have been increased by people’s distaste for the fracking companies’ bully boy tactics as they have tried to browbeat government into changing the regulations governing the seismic traffic light system.”

“How can shareholders or any sensible business keep on backing fracking? To continue forging ahead is beginning to look fanatical and totally irresponsible. Fracking is proving to be economically unviable, the industry cannot operate safely under the very same regulations they helped create.

“Fracking threatens industrial wipeout of some of the UK’s most valuable countryside and has no public support. It’s time for a change of direction. Fracking in our communities is never going to be a strategic winner for this country.”