Shortly before violent protests broke out in the oil-producing city of Basra in Iraq, British government representatives visited an oilfield partially operated by BP, and praised the company’s “impressive” social and environmental performance. Campaigners have criticised the visits for prioritising BP’s interests over those of local Iraqis.

According to documents seen by DeSmog, released in response to a Freedom of Information request from campaign group Culture Unstained, the British ambassador to Iraq, Jon Wilks, met with BP and Iraq’s Department for International Trade on 9 April 2018. The meeting took place at the Rumaila Oilfield, which is being developed by BP.

A summary of the event, sent to Wilks in the following week, states: “Broadly on the oil and gas companies we visited it was impressive hearing about their social outreach and the work they are doing to employ and professionalise local Iraqis – including a focus on those who lived in close proximity to the oil fields. [REDACT]”

“The work of British companies was clearly having an impact on Basrawis, particularly the gas capturing which was improving the air pollution and increasing electricity coverage. [REDACT]”

Following the visit, Ambassador Wilks himself tweeted that he had “Toured the Rumeila [sic] oil field and saw for myself the huge commitment and success of BP, one of Iraq’s main oil operating partners. Some of the infrastructure dates back to the 1950s, but it is being upgraded even as production expands across the field.”

The praise of BP’s work came at a time of severe discontent among local Iraqis.

Around three months after the ambassador’s visit, citizens of Basra took to the streets to protest lack of basic public services in the region, including polluted water, electricity shortages and unemployment. The unrest resulted in the deaths of several protesters.

While the government praised BP’s production expansion and social and environmental conduct, it appears not to have engaged with this nascent unrest: The Foreign Office denied holding any records relating directly to the protests.

In a response to DeSmog UK, the Foreign Office said:

“The comments the Ambassador made were in relation to BP and the good work they are doing to provide jobs and training for Iraqis, and help local communities.”

“We regularly engage with the Government of Iraq on the importance of addressing water, electricity, public services and job needs for the people of Basra.”

BP said it couldn’t respond as it wasn’t aware of the comments in question.

In another email, the ambassador was told that the visit to British companies in Basra would be “an opportunity for us to understand their key concerns and demonstrate HMG [Her Majesty’s Government] support for these companies.”

BP is not the only oil company operating in the Basra region of Iraq. Lukoil and Exxon Mobil also operate major oilfields in the area, although Rumaila is the biggest.

In this region of Iraq, the wealth of the oil industry is in sharp contrast to the struggles of daily life in Basra. Protesters told media outlets at the time that they felt neglected as the money made by oil executives failed to trickle down into their own pockets, and higher paying jobs went to foreign workers.

“Extreme health and energy-poverty conditions have worsened as the activities of BP and other companies have expanded and as oil production and exports increased,” according to Iraqi economist Kamil Mahdi, in a briefing including Culture Unstained.

“It is not good enough for these companies to claim they are not directly responsible for the outcome,” he said.

A fact-finding mission by the Iraqi Civil Society Solidarity Initiative NGO found that the water in Basra was not safe for human consumption, due to the disposal of industrial and petrochemical waste, either from Iran or inside Basra. 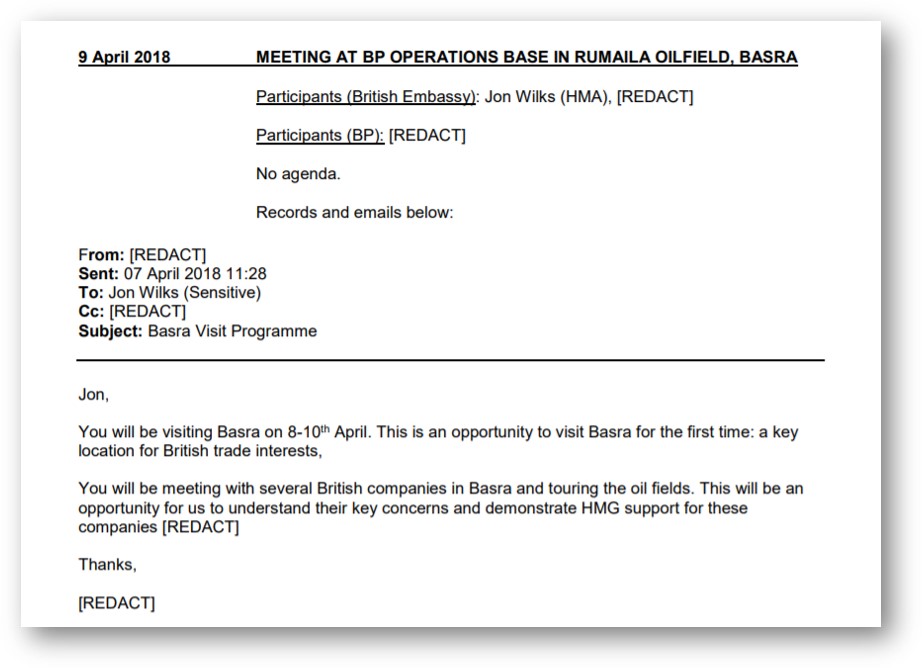 “They pretty much give the impression that they understand their role is there to service the interests of the oil companies … whereas ideally they should be taking a much more critical approach, and also seeking to understand what civil society groups on the ground feel about those companies,” he told DeSmog.

He also questioned the need for redactions that appear throughout the released documents, including those made to protect the commercial interests of BP.

In a letter accompanying the documents, the FCO justified the redactions on the grounds that:

“Failure to protect such commercially sensitive information would limit the sources of information and interlocutors available to the FCO and limit the FCO’s ability to promote the British economy and lobby for the interests of British businesses overseas.”