Anti-fracking campaigners gathered in Windsor today to protest against Centrica’s investments in the fracking industry.

The demonstration was part of a UK-wide day of action targeting companies that support oil and gas production by providing finance, materials, and infrastructure to the industry.

“We are targeting companies such as Centrica, that are linked with Cuadrilla,” said Annabel Gregory, a member of Reclaim the Power, the anti-fossil fuel group that organised the protests. “This is a series of coordinated actions to expose the supply chains. Centrica is implicit in supporting fracking in the UK.”

Centrica, which owns British Gas, has invested millions into Cuadrilla, the gas exploration company that in October 2018 was given a licence to drill at Lancashire’s Preston New Road site.

Cuadrilla, which has also attempted to drill in other areas in Lancashire such as Grange Hill and Weeton, has so far been the target of the bulk of anti-fracking protests. Yet a number of other sectors, such as water and finance, are needed to make fracking a reality.

Today, by targeting energy company SSE in Bristol, and bank HSBC in Cambridge and Leeds, as well as Centrica in Windsor, the group aim to expand focus of anti-fracking campaigns towards the supply chain at large.

Outside Centrica’s headquarters in Windsor today, over 50 protestors were met by a long line of police officers and horses during the peaceful demonstration. Campaigners created a fake fracking rig and performed guided tours outlining the history of Centrica’s involvement in the fracking industry. 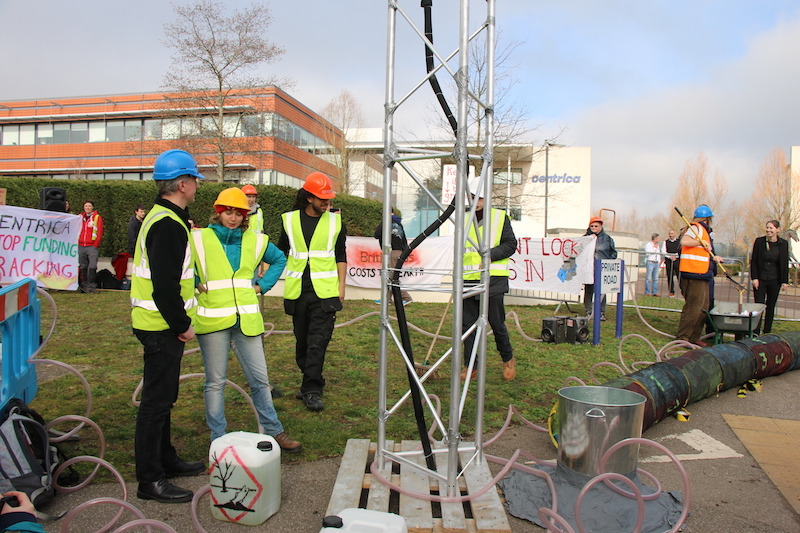 Francine Dulong, a theatre performer originally from Canada, had travelled to Windsor from London for the protest. “We have to be able to laugh at it because the reality is actually very dire,” she said.

Fracking, or hydraulic fracturing, is a drilling technique which recovers natural gas and oil from shale rock below the Earth’s surface.

It is “the exact opposite of what we should be doing,” said Julyan, who did not want to give his surname, and who was a little tired after having cycled three hours from London with a larger group to join the protest. “We should be moving to a more renewable, more regenerative culture.”

In December 2018, fracking at Cuadrilla’s Preston New Road site was suspended after a 1.5 magnitude earthquake. The company has since requested a review of the current seismic threshold, where drilling must be suspended when quakes measuring over 0.5 magnitude are detected.

“Gas is not the way to go,” said Ruth London, from Fuel Poverty Action, which is working with Reclaim the Power to protest British Gas. She claimed the company is enabling fracking “by selling unaffordable energy.” 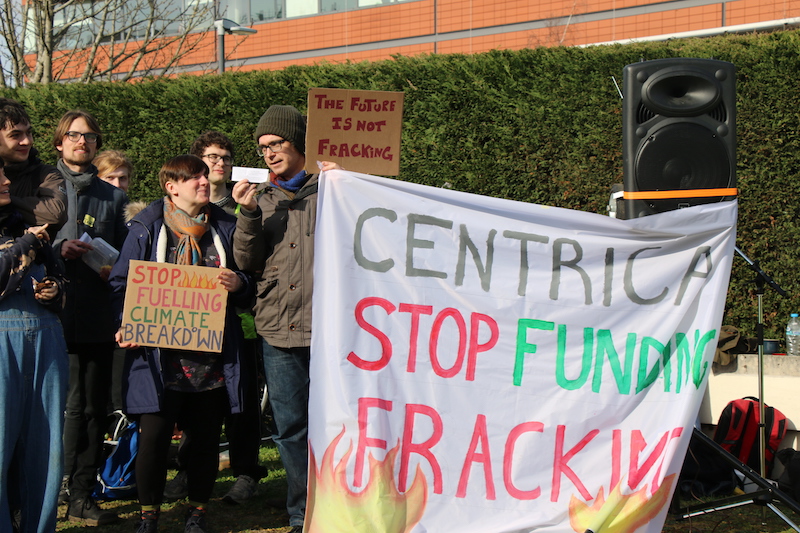 A WWF report published in May 2018 found that if all planned gas developments go ahead, the UK will miss its climate targets. The report also indicated that the power gap caused by the UK‘s planned phase-out of coal by 2025 can be met without the construction of new gas power stations.

“The development of natural gas from shale has a potentially important role to play in securing gas supplies for the UK,” said Centrica in a statement, responding to today’s protests. “As the UK’s largest energy supplier, we believe Centrica has a duty to explore the potential of natural gas from shale to provide safe, secure energy to millions of homes and businesses.”