Campaigners have called on the government to refuse planning permission for the country’s biggest gas plant, saying that providing public subsidies for the project contradicts the UK’s climate commitments.

Energy company Drax plans to modify the existing coal electricity generation units to gas generation and battery storage at its biomass and coal plant in Yorkshire. But it is asking for further public subsidies to undertake the development.

Campaigners today handed over a petition signed by over 96,000 people to Greg Clark, Secretary of State for the Department for Business, Energy and Industrial Strategy (BEIS) asking him to block the plans.

Peter Deane, a campaigner from environmental group Biofuelwatch who organised the action, said that Drax did not deserve the validity and justification that planning permission would give it. “It’s a real contradictory attitude. It’s the total opposite of the right thing.”

“A million people have just marched on the streets and have been completely ignored,” said Deane, who also gave a speech outside BEIS’s offices in Westminster, referring to the rally on March 23 for a people’s vote on the UK’s departure from the EU. “But it’s important that Drax know we’re here.”

The hand-in followed a small street gathering of around 10 people with speakers, banners and a homemade power plant chimney.

In August 2018, 89 organisations, including Friends of the Earth, Reclaim the Power, and the UK Youth Climate Coalition signed an open letter calling on the government to abandon the plans.

“We’re here to untie ourselves from the dangerous fossil fuel industry,” said Annabel Gregory, from campaign group Reclaim the Power. “We need to transition and this is just a continuation.” 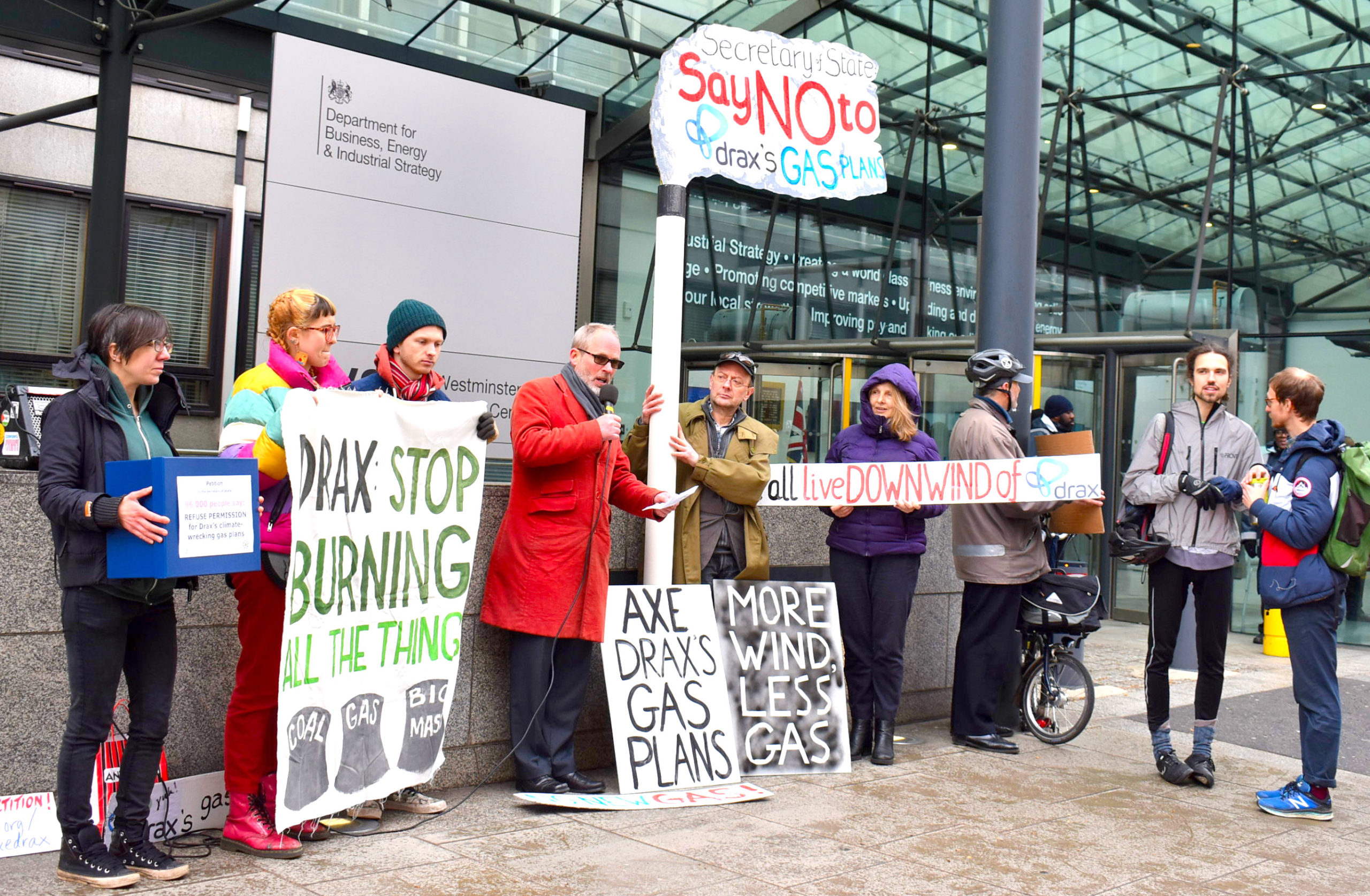 Drax’s plant is the newest coal-fired station in the UK and is one of the country’s largest emitters of carbon dioxide.

Fran, who did not want to give her surname, travelled from Bristol to see the hand-in, and said that granting permission to Drax would “lock the UK into another generation of fossil fuel use.”

“This comes at a time when we need to be looking for genuinely lower emissions options, like renewables. There is no social licence for this,” she added.

In February 2019, Drax became the first station in Europe to capture carbon dioxide from wood burning, which aims to reduce the amount of carbon in the atmosphere overall.

The process is controversial, owing to the amount of wood needed to produce power. Drax burns seven million tonnes of wood a year, more wood than is harvested in the whole of the UK. Much of this is imported from the USA and Canada.

Drax Power CEO Andy Koss said that if the project goes ahead, the company “could stop using coal ahead of the government’s 2025 deadline, reducing emissions and protecting jobs.”

BEIS did not respond to a request for comment. A decision on the permit application is expected around October 2019.