Comment: Climate Deniers are Threatened by Extinction Rebellion Because It Challenges the Ideology on Which Their Luxurious Lifestyles are Built

The Extinction Rebellion protest movement has grown in scale and impact in recent weeks, bringing energy and chaos to the streets as people wake up to grim climate realities. Alongside the School Strikes, the new movement has been a massive, joyful, peaceful wake-up call to conservative environmentalists and compromised politicians alike.

But not everyone is taking it well. Several prominent climate science deniers are not pleased at this mass show of concern, and they’re using the platform the UK’s mainstream press continues to give them to express their ire.

David Rose kicked things off in the Mail with the “scoop” that Extinction Rebellion (or ‘XR’ as Rose insisted on calling them) met with Energy Minister Claire Perry. That might have been big news (or news at all) had the fact that Perry publicly offered to meet the campaigners not been widely reported back in 2018 (including by DeSmog). 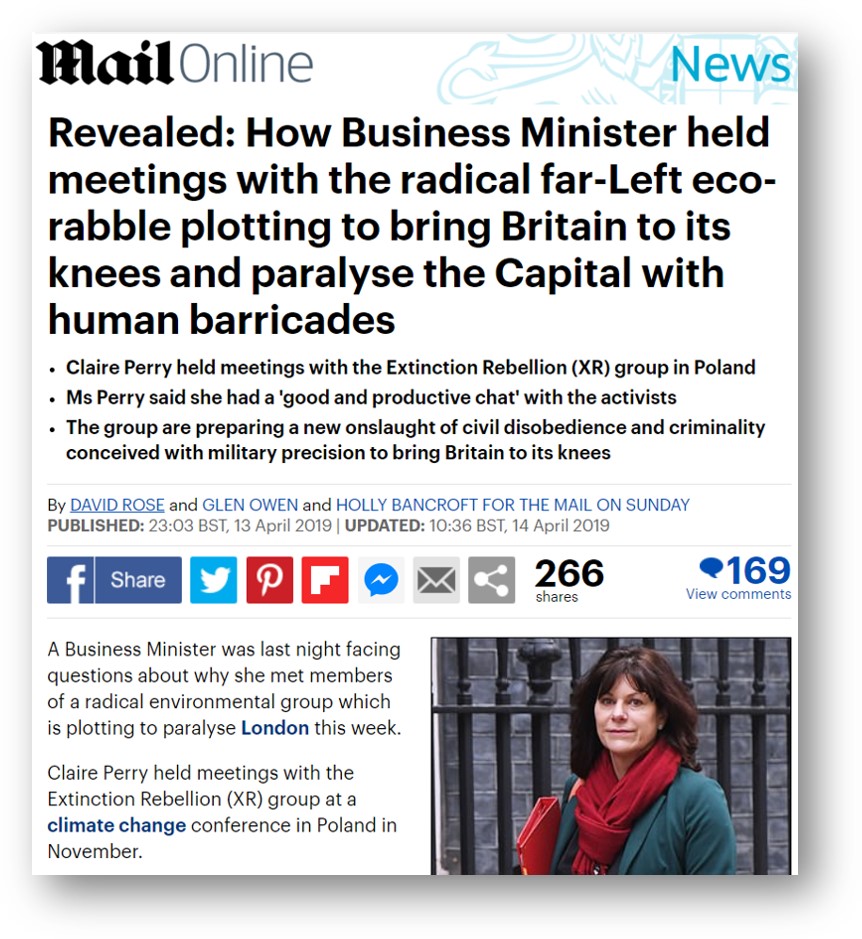 The article was accompanied by a report from an ‘undercover’ journalist who went to a public meeting XR held in advance of its actions. The standout revelations from this brave piece of journalism were that activists sometimes have dyed hair, sometimes eat food out of tuppaware boxes, and sometimes want to get arrested for their cause (which, of course, is Extinction Rebellion’s publicly stated aim).

Commenting on the ‘revelations’ in the Daily Mail, Dominic Lawson suggested that the meeting was significant because “getting to see a government minister isn’t easy.”

Well, unless you’re a fracking company, Shell, or BP, of course.

Lawson was distressed that the Energy Minister met with Extinction Rebellion at all, moaning that:

“…making Britain hell for business (and anyone who drives a car) is what Extinction Rebellion stands for. As the Energy Minister must know, its mission is to ‘save the planet’ by eliminating Britain’s CO2 emissions entirely by 2025. Or in other words, to reduce us to a state of mere subsistence, last seen in the pre-industrial age when life was (for the great majority) nasty, brutish and short.”

The idea that our fossil-fuel-based capitalist economy is the source of all that is good in the world, and that no other path is possible, is these deniers’ default setting. Lawson’s father, of course, is Nigel Lawson — Margaret Thatcher’s chancellor and the founder of the climate science denial campaign group, the Global Warming Policy Forum (GWPF).

In a familiar, if confusing refrain, Lawson Jnr ends: “It’s not British politicians that groups such as Extinction Rebellion should be haranguing and demonstrating against, but those in the People’s Republic of China.”

“The trouble is the Chinese state would treat rather robustly any Extinction Rebellion activists who attempted to demonstrate on its busiest streets, or to mount a naked protest in the Great Hall of the People in Beijing. I don’t recommend they try that.”

The China baton was picked up by Viscount Matt Ridley, who wrote a carbon copy of Lawson’s rant for The Times. It was quickly cross-posted by the GWPF, to which coal-baron Ridley is an advisor.

And you can see why.

Echoing Lawson’s China jibe, Ridley writes that Extinction Rebellion “protest that Britain is doing nothing about climate change. Not true. No country has enacted a more draconian set of emissions targets, but try protesting in Russia or China — it would not be such a walk in the park.”

There’s a sort of veiled threat behind all these remarks: that Extinction Rebellion, should it want to go global, should expect similar treatment to other Chinese dissidents.

But what’s most remarkable is the scientific and ecological illiteracy of these writers. It’s true that China has been the world’s leading emitter for more than a decade. But it’s also true that China is trying to reform its economy from investment and manufacturing, to consumption and services.

According to Phillip Stalley ,Associate Professor and Fulbright Scholarship Program Advisor at DePaul University, while there may be some way to go, there are grounds for optimism about China’s climate targets:

“According to the Energy Information Administration, a U.S. federal agency, if China can rapidly shift to a service-based economy, it can reduce the amount of energy it uses by five quadrillion British thermal units by 2040, an amount roughly equivalent to what Spain consumes annually. Fortunately for everyone on Earth, most scholars say China can hit these targets.”

“China surpassed its official target, lowering its energy intensity by more than 55 percent between 1990 and 2015. Despite its current emissions growth, the United Nations Environment Program says that China remains one of the few major economies ‘on track’ to meet its Paris targets for reining in carbon dioxide emissions.”

There’s no point in Extinction Rebellion taking to the streets while China is doing nothing, the deniers say. Well, then I suppose it’s a good thing that China is becoming a world leader in implementing climate policies.

But that’s not really the point. As always, China is being used as a useful distraction.

What Lawson and Ridley seem to have missed is that when so many of the goods that arrive on our doorstep are marked “Made in China” it is simply not possible to pass the buck and pretend that western lifestyle and consumption isn’t intimately connected with production on the other side of the planet.

Consuming less and degrowth aren’t concepts that these commentators are likely to comprehend. But it is the economic backdrop to the Extinction Rebellion protests. 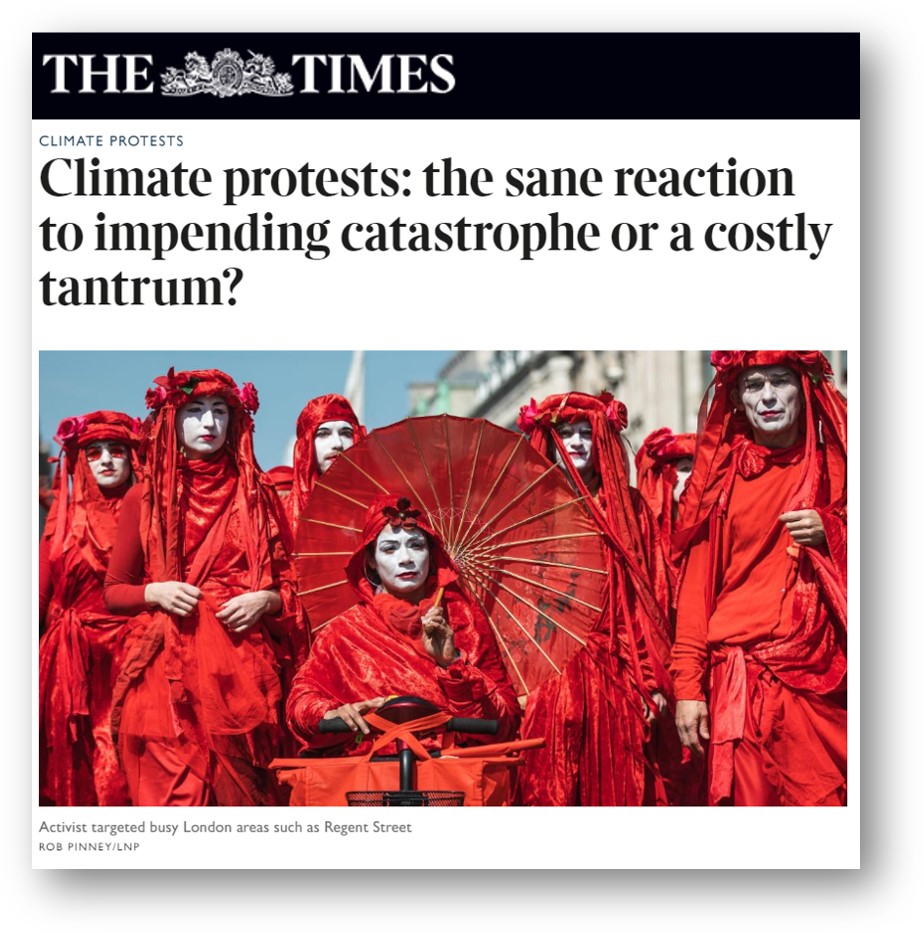 Lawson and Ridley are not alone in overlooking this inconvenient truth.

Ben Ramanauskas, a Policy Analyst at the Taxpayers’ Alliance, writes in Capex that  “Extinction Rebellion are wasting our time – and their own”. He argues:

“Not only will there be far more human lives in the future, if human progress continues on its current trajectory, then these humans will enjoy lives which are wealthier, happier, and healthier than anything we could possibly imagine.”

“Therefore, as the Philosopher Derek Parfit pointed out, we have the ability and the duty to maximise the welfare of future generations.”

By which he means deregulating everything and leaving the free market in charge, of course.

This is bizarrely utopian, even by the standards of a campaign group embroiled in scandals around electoral wrongdoing as part of the Leave campaign during the Brexit referendum.

The old dinosaurs of Lawson and Ridley (alongside Christopher Booker, who has written his last climate science denial polemic for the Telegraph) are becoming less relevant to the UK’s media space. But they are being quickly replaced by a new breed that has eternal faith in a capitalist economy and (often futuristic) technologies riding to the rescue at some undefined future point.

This ideological battle — and the denier voices that articulate it in the mainstream press — has become more acute as commentators and politicians are forced to make increasingly outlandish claims in defence of unsustainable western lifestyles.

An ideology supporting lifetsyles that Extinction Rebellion has taken to the streets to urgently condemn.

Image credit: Soila Apparicio ©. Updated 17/04/19: A reference to the TPA was revised to state it was alleged it was involved in ‘wrondoing’ rather than ‘falsehoods’ around the Brexit referndum.