UN shipping talks stalled last week as slow-moving players, including Saudi Arabia, Brazil and the US, obstructed attempts to decide how the sector should begin to decarbonise.

The negotiations, which took place at the London headquarters of the International Maritime Organisation (IMO), are part of a global process on how to cut shipping’s large and growing emissions.

Setting speed limits on ships and increasing operational efficiency were just two of the 15 proposals on the table for reducing emissions in the short term, meaning before 2023.

But much of the week-long environmental protection committee talks were spent debating the order in which different proposals should eventually be discussed, with little to no progress made on which of them should actually be implemented.

NGO observers and delegates hoping for more headway expressed frustration that an undue focus on these and other nitty-gritty procedural issues essentially amounted to filibustering by countries wishing to slow progress.

After decades of talks, countries agreed last year on a climate deal for international shipping. Part of this deal was to set these short-term emissions cuts — considered an important step to avoid delaying action for decades.

But procedural dithering meant decisions on measures that will have the highest impact on shipping emissions were pushed to next April at the earliest.

“If [those who want slow progress] can just get everybody really busy with those details, before you realise time is up, and everybody has to go back home. That’s essentially what happened last week.” 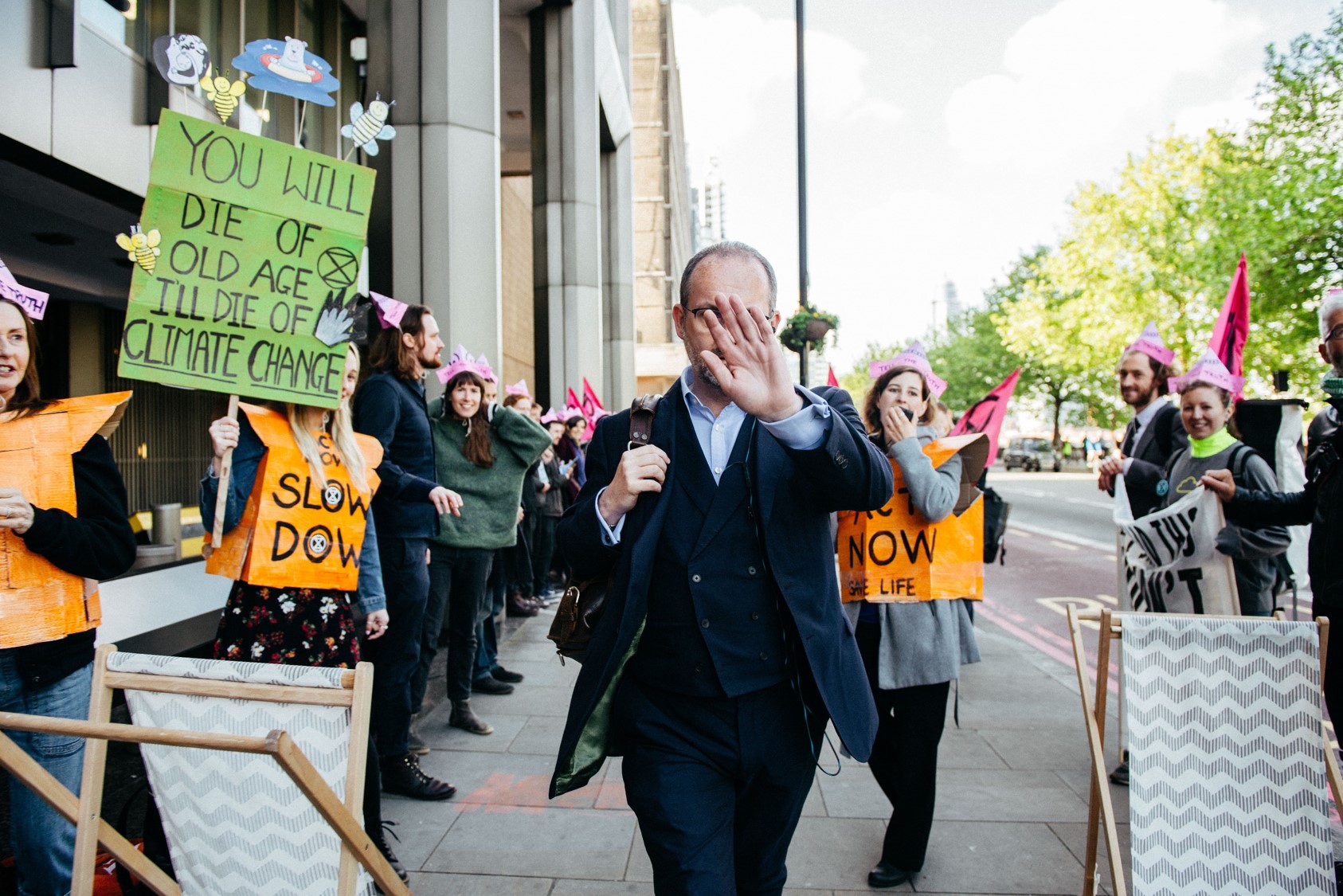 Saudi Arabia, Brazil and the US were among the worst offenders for blocking progress,  even objecting to the concept of prioritising emissions reduction measures.

The same three countries last year refused to sign up to the greenhouse gas deal agreed by the IMO, which targets a 50 percent cut in emissions from shipping by 2050, compared to 2008 levels. Chile, Peru and Argentina were also active in slowing down ambition, says Abassov.

“We could sense there are some delegations who might be just playing some delaying tactics and not allowing the IMO to move quickly on some of these things,” says Jimmy Nuake, the Solomon Islands representative at the talks, without naming specific countries.

Abassov agrees that progress was slow. “We have an aspiration, we need to have measures that are binding that change or guide the behaviour of individual ships or shipowners,” he says. “A year after the IMO agreed that it will have to eventually decarbonise shipping, there have been no substantial discussions on those measures.”

On the first day of the talks, Extinction Rebellion blocked traffic outside the IMO in a Titanic-themed demonstration to demand the organisation declare a climate emergency and decrease shipping speeds to reduce emissions.

“We saw again that they managed to avoid committing themselves to any binding regulations,” says Paulo Enock, an Extinction Rebellion campaigner. “There are alternatives to fossil fuel-driven marine navigation, and they ought to be coming on stream right now.”

International shipping is responsible for around three percent of the world’s greenhouse gas emissions, roughly the same as Germany. And these emissions are on the rise: the IMO’s most recent study on the topic estimates they will grow 50 to 250 percent by 2050.

Despite such growth, a report from the International Transport Forum published last year found the whole industry could in theory be fully decarbonised by 2035.

But progress on climate regulation at the IMO is stalled by powerful shipping trade associations, according to a 2017 report from InfluenceMap. It found that the International Chamber of Shipping (ICS), a global shipowners trade body that represents over 80 percent of the world merchant fleet, was leading efforts to oppose action.

Other major trade bodies such as BIMCO, the world’s largest international shipping association, were also slowing progress, it said.

At last week’s talks, both ICS and BIMCO were pushing for voluntary measures that research suggests are too weak to achieve the IMO’s 2030 climate targets.

The ICS process means the voices of more progressive companies tend to get lost, Transport and Environment’s Abassov explains, because they are represented in trade associations alongside less progressive actors.

As well as these powerful industry groups, corporate representatives are also often part of official state delegations. InfluenceMap found that 31 percent of nations were represented in part by direct business interests at an IMO environmental committee meeting in 2017.

This is in part because many of the biggest “flag states” — countries where ships are registered  — are small countries.

Panama, for example, is the world’s largest flag state, followed by the Marshall Islands and Liberia. These small countries have small institutional capacity, says Abassov, leading private actors to emerge. “These end up speaking on behalf of the government at the IMO,” he says.

Another Transparency International report last year found that five states — Panama, Liberia, the Marshall Islands, Malta and the Bahamas — own over half the world’s fleet and contribute 44 percent of the total funding from the IMO’s 170 member states.

“These countries potentially have exaggerated weight in the IMO policymaking processes, particularly when no mechanism exists to protect against undue influence,” the report said.

The IMO has also frequently been criticised for a lack of transparency. Unlike the UN’s international climate talks, the IMO plenary is not live-streamed or open to those without official access to the talks.

Journalists with permission to attend the talks can view the plenary, but are not permitted to report on anything said without first gaining direct permission from the person who spoke to do so. At least one journalist has received a temporary ban from the IMO for reporting comments made in the open plenary.

In one unexpected move at the talks, the IMO’s environment chair, Hideaki Saito, refused to set up a special working group to fast-track GHG discussions, despite a majority of countries supporting this measure.

“That was a bit of a mess,” says Nuake. “The majority of the room were [supporting] that, and the chair’s sort of summary of what was discussed was not to have it, which really surprised a lot of us.”

Nuake argues such additional working groups are essential to making progress on emissions cuts quickly enough. Measures will need to be decided on at the next environmental protection committee meeting in April 2020 in order for them to come into effect by the 2023 deadline set out in the IMO’s greenhouse gas strategy,” he says.

The chair’s decision creates “a major obstacle” to the timely implementation of a greenhouse gas policy,” another IMO delegate told shipping news website Splash 247, on condition of anonymity.

“This work clearly needs to be undertaken urgently and efficiently, but the IMO seems not to want to do that,” they added.

Some progress was made at the talks, however, with countries agreeing to tighten up mandatory efficiency standards for some new ships. These set limits on the amount of CO2 different vessel types are allowed to emit per tonne of cargo transported.

Since these efficiency standards only apply to new build ships, and most ships have lifetimes of 25-30 years, they will take years to filter through to the wider fleet, however.

Campaigners also accused the IMO of failing to set the standards high enough to drive decarbonisation.

“What a shame that IMO continues to treat the [targets] as a way of describing what is already happening rather than mapping out a future pathway to decarbonisation,” says John Maggs, senior policy advisor of Seas At Risk.

Increasing ship efficiency is also a crucial driver for the adoption of alternative fuels other than fossil fuels, says Aoife O’Leary, senior legal manager at the Environmental Defense Fund. “Because of the lifetime of ships we really, really, need to be doing [efficiency measures] today to make sure that the ships are ready for these alternative fuels,” she adds.

There were other small bits of progress. A procedure for assessing the impact of greenhouse gas reduction measures on states was decided on, as well as plans for a new study assessing shipping emissions, to be published in 2020.

But those concerned about climate change continue to worry that progress is nowhere near fast enough.

“The IMO just needs to get its act together and start progressing some of this work,” says Nuake. “Unless the sector does its part and quickly transitions to low carbon shipping, it will be quite difficult to achieve the 1.5C temperature goals set in Paris.”

“Our biggest concern in the Pacific and other small islands states is that we can’t afford to delay any of this any more, because our islands are already going underwater.”

Why did chair of MEPC Hideaki Saito yesterday take a decision against the majority of countries, to NOT develop a standing technical group to fast-track work on GHG?

Sounds technical, but threatens the credibility of @IMOHQ itself to be serious about combating climate change pic.twitter.com/7KPtQC5S8s

Jocelyn Timperley is a freelance climate journalist from Scotland, currently based in Costa Rica. She writes for a range of publications including BBC Future, BBC Science Focus and Wired UK, and co-runs the newsletter From A Climate Correspondent.