Political lobbying in the U.S. that helped block the progress of proposed climate regulation a decade ago led to a social cost of $60 billion, according to a new study.

Environmental economists Dr. Kyle Meng and Dr. Ashwin Rode have produced what they believe is the first attempt to quantify the toll such anti-climate lobbying efforts take on society.

The pair say their work reveals the power firms can have in curtailing government action on climate change, in the face of “overwhelming evidence” that its social benefits outweigh the costs, which range from reduced farming yields to lower GDP.

Crucially, they found that the various fossil-fuel and transport companies expecting to emerge as “losers” after the bill were more effective lobbyists than those expecting gains.

The authors say their results, published in Nature Climate Change, support the conclusion that lobbying is partly responsible for the scarcity of climate regulations being enacted around the world.

However, they tell Carbon Brief that there is still hope for those seeking to develop effective new climate policies:

The Waxman-Markey bill, described by the study’s authors as “the most prominent and promising U.S. climate regulation so far,” did not make it past the Senate in 2010, meaning it never passed into law.

However, having passed the House of Representatives in summer 2009, it remains the closest the nation has ever come to implementing wide-ranging climate legislation.

Formally known as the American Clean Energy and Security Act 2009, the bill proposed a 17 percent cut in U.S. emissions by 2020 — and then 80 percent by 2050 — based on 2005 levels. It was named after the two Democrat representatives who wrote it, Henry Waxman and Edward Markey. A key element of Waxman-Markey was its cap-and-trade scheme, which would have limited the amount of greenhouse gases produced nationally while creating a fixed number of tradable emission permits for industry nationwide. Other measures included a renewable energy standard and legislation for energy efficiency and grid modernization.

The bill was the culmination of several attempts stretching back to 2003 to pass cap-and-trade legislation limiting the U.S. economy’s emissions. As none of these efforts were successful, president Barack Obama instead relied on the executive powers of the U.S. Environmental Protection Agency to tackle greenhouse gas emissions, specifically its power to regulate “any pollutant” that “endangers public health or welfare.”

Today, with climate change low on the list of federal priorities, there are some state-level ventures in place, such as California’s cap-and-trade system, but still no country-wide scheme.

Media reports around the time Waxman-Markey was making its way through the U.S. government made it clear that lobbyists were thought to be hindering its progress.

However, the authors of the new paper note that despite such reporting it is difficult to appreciate the extent of political lobbying and its impact on the final outcome. According to them, lobbying often goes unrecorded and, even when it is, it can prove difficult to quantify which groups stand to gain and lose — and to what extent.

For Waxman—Markey, they made use of the “comprehensive U.S. congressional lobbying record” to piece together a full picture of the situation at the time.

According to their paper, the bill accounted for around 14 percent of all recorded lobbying expenditures at the time — more spending on lobbying than for any other policy between 2000 and 2016.

A separate study conducted by Dr. Robert Brulle of Drexel University in 2018 found that over this period, climate issues took up roughly 4 percent of all lobbying spend, amounting to over £2 billion. He concluded that fossil-fuel, transport and utility companies dominated this activity, with expenditures that “dwarfed” those of environmental groups and renewable energy corporations.

However, some of the highest spenders listed by Meng and Rode in their new paper were those who stood to gain from the bill, such as General Electric and the Pacific Gas and Electric Company.

To understand different lobbyists’ motivations, the researchers first had to work out how Waxman-Markey would have affected companies had it passed into law.

They took data on prices from a prediction market tied to the bill while it was being considered by government and combined it with stock prices for firms involved in lobbying. In a joint email, Meng and Rode explain how this works to Carbon Brief:

“A prediction market is essentially a betting market where participants bet on the likelihood of some event happening. Think of it like a sports betting market (in other words, will Liverpool win the Champions League final?), but you can do that for any event…The power of a prediction market is that, under some standard economic assumptions, the price of a bet of that market at any point in time reflects the market-held belief that the event will happen.”

One benefit of this approach was that it allowed them to establish, in what they describe as a “hands-off,” objective manner, who the “winners” and “losers” were in the face of climate regulations. This allowed the researchers to bypass both their own preconceptions, as well as any statements made by the firms themselves which, as the pair point out, may not be reliable.

The team found a statistically significant relationship [see graph below] between how much a firm spent on Waxman-Markey lobbying and how much the bill was expected to change its stock value. 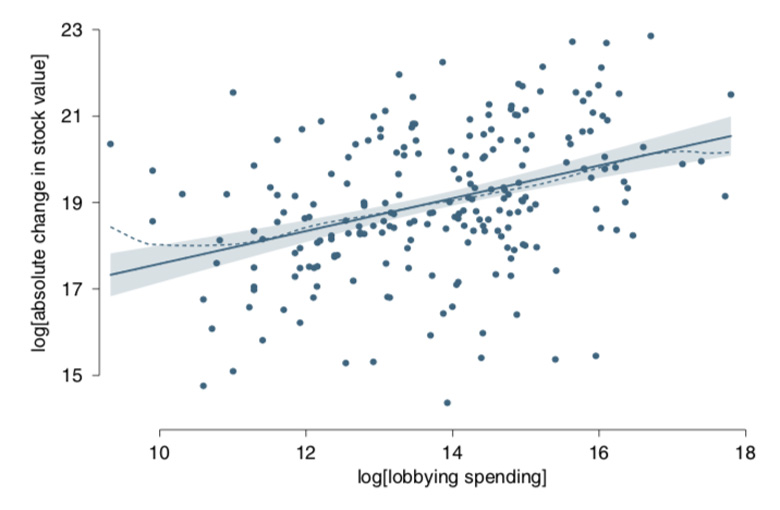 The researchers found a significant relationship between the amount a firm spent lobbying on Waxman-Markey (x-axis) and how much the policy was expected to alter its stock value (y-axis). Source: Meng and Rode (2019).

To then understand how these activities affected the final outcome, they built a model that incorporated a game-theory approach to lobbying — where firms try to influence policy for their own benefit — and a standard model of how firms behave under a cap-and-trade policy.

This model revealed that oppositional lobbying — that is to say activities by companies that stood to lose out — was the most effective. This implies the input of “loser” firms, which include Boeing, Marathon Oil, Walmart and Ford, had more influence that “winners,” despite spending comparable sums on lobbying. From this conclusion, the researchers estimated that the sum of all lobbying decreased the probability of the bill being enacted by 13 percent.

While their work does not resolve the issue of why this disparity between winners and losers exists, the pair tell Carbon Brief they have some ideas:

“The asymmetric effectiveness could be due to differential abilities of firms to collectively organise, gather information on policy consequences and to lobby on other, related issues. While all these explanations are consistent with our findings, data limitations prevent us from examining which one is most relevant for the Waxman-Markey bill.” Hurricane Harvey led to widespread flooding and knocked out power to 300,000 customers in Texas in 2017, with cascading effects on critical infrastructure facilities such as hospitals, water and wastewater treatment plants, and refineries. The photo shows Port Arthur, Texas, on August 31, 2017 — six days after Hurricane Harvey made landfall along the Gulf Coast. Credit: U.S. Air National Guard, public domain

To pin down the financial impact of lobbying, the researchers built on previous research that placed a $467 billion (in 2018 dollars) price tag on the global social cost of the failed Waxman-Markey bill. This was based on forecasts of greenhouse gas emissions that would have been avoided had it come into force.

The cost of these emissions for the world as a whole are well established, as they explain to Carbon Brief:

“A large body of research has demonstrated the costs of unmitigated climate change in myriad contexts, including decreased agricultural yields, increased conflict, increased mortality and morbidity, decreased labor supply, and lower gross domestic product. Failure to enact Waxman-Markey is expected to have had adverse consequence in all these areas by allowing for higher greenhouse gas emissions and thus higher climate damages.”

Since they found that lobbying increased the likelihood of the bill not passing by 13 percent, they assigned this share of the total cost to lobbying efforts. This gave them their final figure of $60 billion.

Given the current state of climate policy in the U.S., Meng and Rode conclude by suggesting how this knowledge could be used to build a new strategy that is more likely to be successful.

They took their model and used it to gauge the impact of providing more free credits under the cap-and-trade system to companies — and particularly those that lobbied against the new bill. As this would lead to greater gains or reduced losses, they found it could effectively reduce the amount of anti-bill lobbying and make it more likely to succeed.

While they note such actions could prove unpopular and have unintended political consequences, they suggest this information could nevertheless be incorporated into future policy-making. They tell Carbon Brief:

“Our new point is that if the very likelihood of having climate policy enacted in the first place may be jeopardised by political influences (via lobbying), why not try to use this revenue to neutralize some of the political opposition in a targeted way.”