Wet weather didn’t deter hundreds of protesters from joining Pankhurst, as well as Game of Thrones actor Natalie Dormer, singer-songwriter Emeli Sande, and London Mayor Sadiq Khan on Sunday in London for the annual March4Women. The event was organised by Care international, for which Pankhurst is an advisor, with the march this year focused on gender inequality and climate justice.

She told DeSmog that there are a number of qualities that closely link both the gender and climate justice movements, including their shared tactics of direct action: “I think climate activists have to some extent modelled themselves on previous social reformers and those arguing for change both in terms of social norms and in terms of policy change. So there is a link through that to the feminist movement more generally in terms of people being fed up, frustrated saying ‘Ok what can we do?’”

“Put that all together and put together the fact that feminism is a global movement, just as environmentalism is, with the understanding that you can’t just solve it one country at a time. I think for all of those reasons that we have an amazing link between climate justice and gender justice.”

Care International is calling for women and girls to be central part of the solution to the climate crisis, and is asking the UK government to accelerate the shift to net zero emissions, setting ambitious national plans to respond to the climate crisis by September 2020, and significantly increase funding for gender-just climate resilience measures that support poor and vulnerable people in developing countries.

Pankhurst argued that the lack of gendered solutions to the climate crisis is problematic.

“If you look at the experience women are disproportionately affected by climate emergencies. They are often the ones that have to go and collect water from further afield. They are often the ones who are responsible for the young, elderly, disabled in conditions that are aggravated by climate emergencies. I think they are disproportionately affected.”

“Their voice in terms of power and decision making is silenced so their experiences are not center stage in ways that could help with having a gendered lens.”

Nonetheless, she said the youth climate movement that is being led by large numbers of teenage girls was “so inspiring”.

“I think it’s fabulous and I think it’s the voice of those who are fed up and are calling out for change and historically that often is young people. It’s the female reaction to a literally man-made world.”

“There’s a history of women calling that out, and right now it feels like a particularly strong expression of that in the form of Greta Thunberg but also many others.” 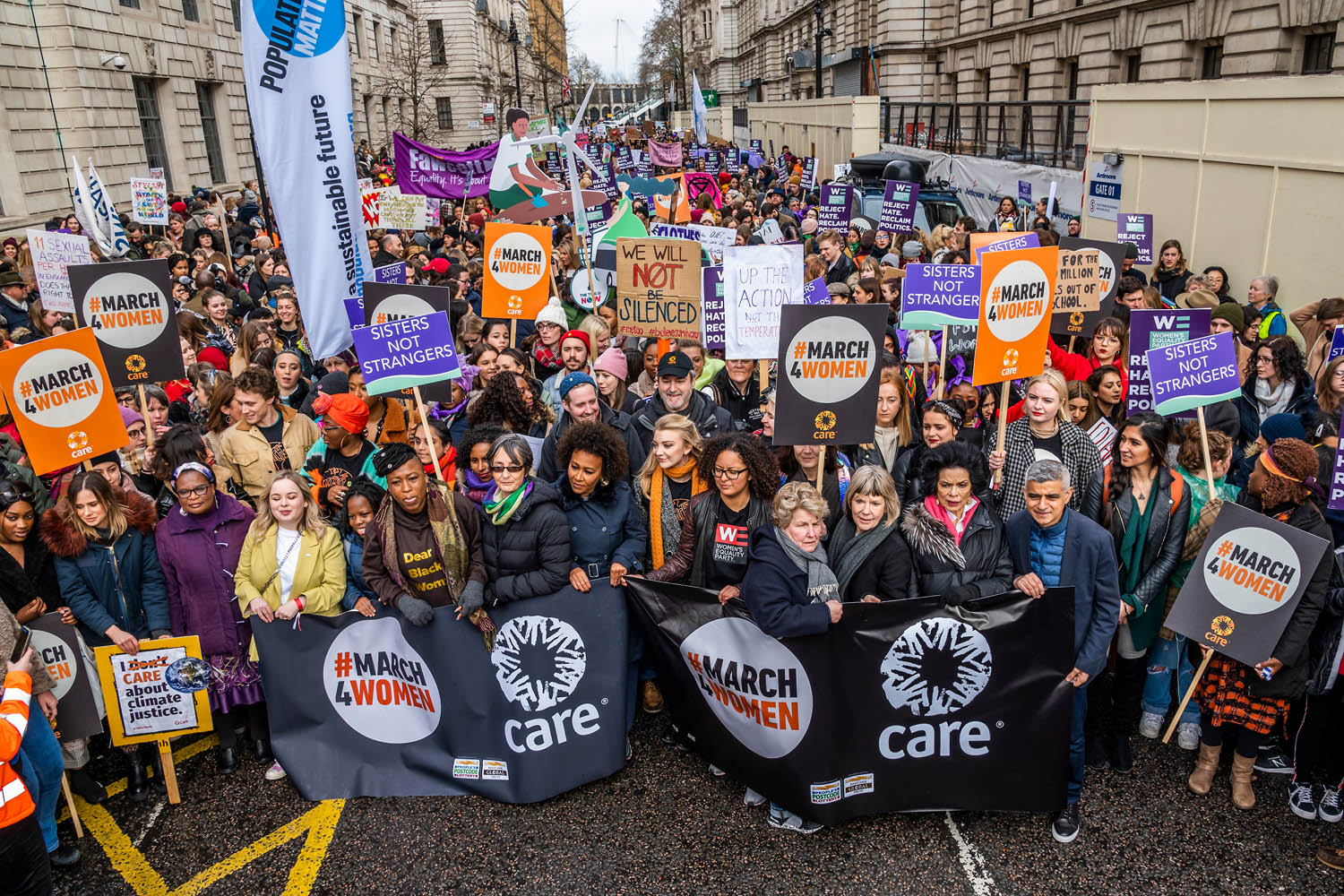 The day started with a pre-march rally in Royal Festival Hall at the Southbank Center, where broadcaster Emma Barnett hosted musicians Emeli Sande and Raye, as well as panelists and activists discussing the link between the climate crisis and gender justice.

Climate scientist Dr Tamsin Edwards explained to the audience how climate change negatively impacts women and girls. She said: “In a nutshell, climate change is all about more heat being trapped in our atmosphere and oceans and what that does is it amplifies everything, it amplifies a lot of types of extreme weather.”

Edwards explained that all the risks that come with poverty are multiplied by climate change, with women and girls feeling the highest impact.

Her comments were echoed by London Mayor Sadiq Khan who began by saying: “Unlike the President of the USA, I am a proud feminist and ally.”

“What Milicent [Fawcett] talked about more than 100 years is ago is as relevant today as it was then because we know, there’s a consequence to climate change and it impacts women and girls more than everyone else.”

“Climate change to me is an issue that is a climate emergency, and as Helen [Pankhurst] said we need climate justice. If we get climate justice, it addresses gender justice, but also it’s an issue of social justice as well.” 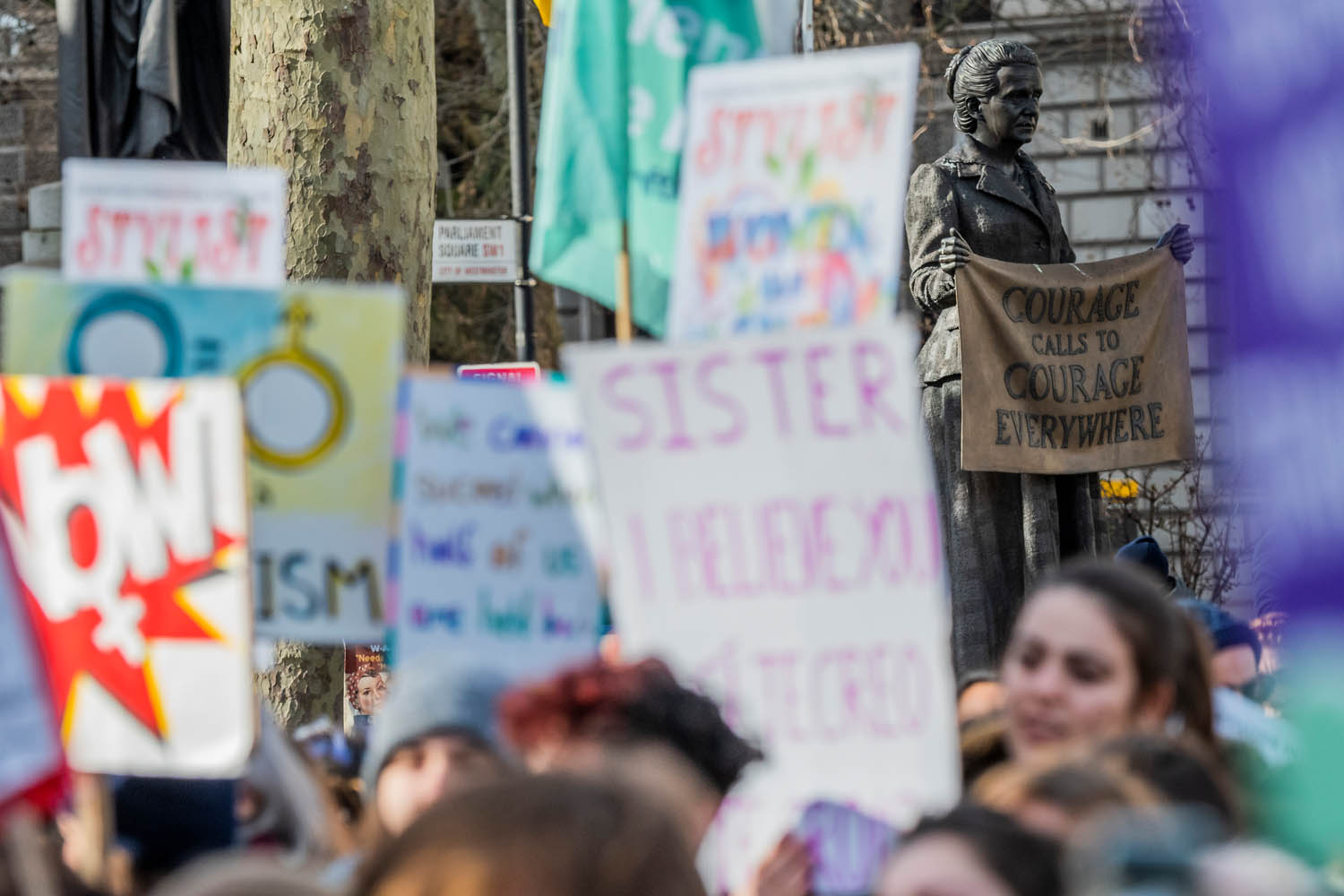 Many of those marching shared the speakers’ desire for a greater emphasis on the crossover between gender justice and climate action.

Emily Reichardt, 22, came to the March4Women armed with a homemade sign after recently attending a climate march in London a few weeks ago.

She told DeSmog, “We came to support women’s rights but also for climate change too, both issues are equally as important to me. I went to the climate march a couple of weeks ago and I think they are pretty similar in what they are fighting for, and both this march and the climate march I feel are really impactful.”

Speaking about the main change she would like to see happen soon, Reichardt said: “I want to see some actual action towards climate change, because we haven’t really seen much. And we need more women’s representation.”

Ela Mete, 23 and Sandra Revuelta, 21, told DeSmog “We came here for both gender equality and climate justice. But there was a moment where I thought ‘how do they go hand in hand?’”

15-year-old climate activist Scarlett Westbrook gave a rousing speech in Parliament Square that largely answered that question, telling the crowd: “We don’t want politicians’ words, we want politicians’ deeds. We may be the future of tomorrow, but we can’t let you steal our today.”

Closing words from my speech today at #March4Women @careintuk #InternationalWomensDay
‘We may be the future of tomorrow , but we can’t let you steal our today.’ pic.twitter.com/ZvZyUCN1c7

Revuelta added: “If they did, we wouldn’t be in this situation.”

A new study adds to a growing body of evidence that fracking represents a “public health crisis,” experts say.
us/As Alarm Over Plastic Grows, Saudis Ramp Up Production in the US
ByMark Schapiro

President Biden is in the kingdom this week to strengthen ties, consistent with ‘American values.’ Meanwhile, a US-Saudi joint venture on the Texas coast is pumping out toxic chemicals and greenhouse gases.

President Biden is in the kingdom this week to strengthen ties, consistent with ‘American values.’ Meanwhile, a US-Saudi joint venture on the Texas coast is pumping out toxic chemicals and greenhouse gases.
Series: Louisiana’s Cancer Alley Communities at Risk
Series: Louisiana's Cancer Alley
Opinion
First the Heatwaves, Now the Flooding. Look to South Asia For a Reminder of Why Climate Action is So Urgent
ByGuest