The repeated honking of a speeding Tawakul shuttle announces the return of travellers to Merti from distant towns at dusk. It also marks the close of another searing and slow day in this part of northern Kenya.

Idling villagers’ faces are suddenly lit by the prospect of seeing their families as they rush to meet the late arrivals, stirring this sleepy shopping centre into activity.

Wako Ade, a local motorbike taxi rider nods towards a reunited couple as the dusty vehicle empties its passengers at the bus terminal and says with frustration: “We are tired of this life. The bus is our only connection with Kenya through Isiolo town. I think the rest of the country forgot us.”

About a decade ago, all eyes were on this weather-beaten and marginalized part of the country. Ade remembers seeing visitors from as far as the capital city, Nairobi, flocking to the town, positioning themselves for prospective business. For good reason: Merti was about to strike oil.

But it never materialised.

In 2008, the China Offshore Oil Corporation (CNOOC) announced it had identified 15 wells which showed strong signs of holding oil and gas deposits. But by January 2011, CNOOC had left, leaving the community with damaged land and $2 million worth of shattered hopes.

“There was excitement everywhere. We began preparing for an economic turnaround that has eluded us since Kenya gained independence,” recalled 75-year-old Dika Bidu from Dadach Basa village, which sits 12km away from CNOOC’s Bhogal rig.

As a village decision maker, the government told Bidu of the new health facilities, schools, piped water and tarmac roads that would be built to improve the lives of the people there.

CNOOC says it paid the KSh 200 million ($2 million) it promised to the Kenyan government. Visiting the town today, it’s unclear if or how the money was ever spent. Ibrahim Fayo, a former civic ward leader tried to obtain accounts and details of relevant transactions from the then Energy Ministry, but his queries were dismissed, he says.

A borehole that CNOOC sunk in Lango village is the only landmark linking the promises of the past decade with Merti’s present reality. Parcels of land that were set aside for health facilities and schools remain empty. There is no piped water. And the roads lay ruined thanks to the oil company’s trucks.

In 2007, a report by the National Environment Management Authority (NEMA) stated that CNOOC had to work with the local leaders to ensure the project would not negatively affect the community.

“But the government and the Chinese never consulted us when they began exploring for oil. They came and left. They have never honoured the promises made to the community up to today,” says Bidu.

NGOs and religious organizations have often visited Bidu and other local residents, mostly to deliver relief in the form of food and sometimes to intervene when there are conflicts between pastoralist tribes over pasture.

But getting to distant villages affected by the oil exploration from Merti shopping centre can take a whole day, thanks to the damage done by the heavy trucks, which left large potholes on the dirt roads. It has made the going tough, and causes many vehicles to break down. When it rains, the villages are completely cut off, says Bidu.

Even the main 185km road connecting Isiolo town to Merti has never been improved. The rough road is dusty, potholed and often becomes impassable during the rainy seasons. Mohamed Abduba Wario, the Merti sub county peace committee chairman, says it takes about 10 hours to travel from Isiolo town to Merti shopping center, for a journey that would take about four hours if the road was better surfaced.

CNOOC says it was only obligated to maintain the roads during the course of its operations, and that any repairs it made were always intended to be temporary. 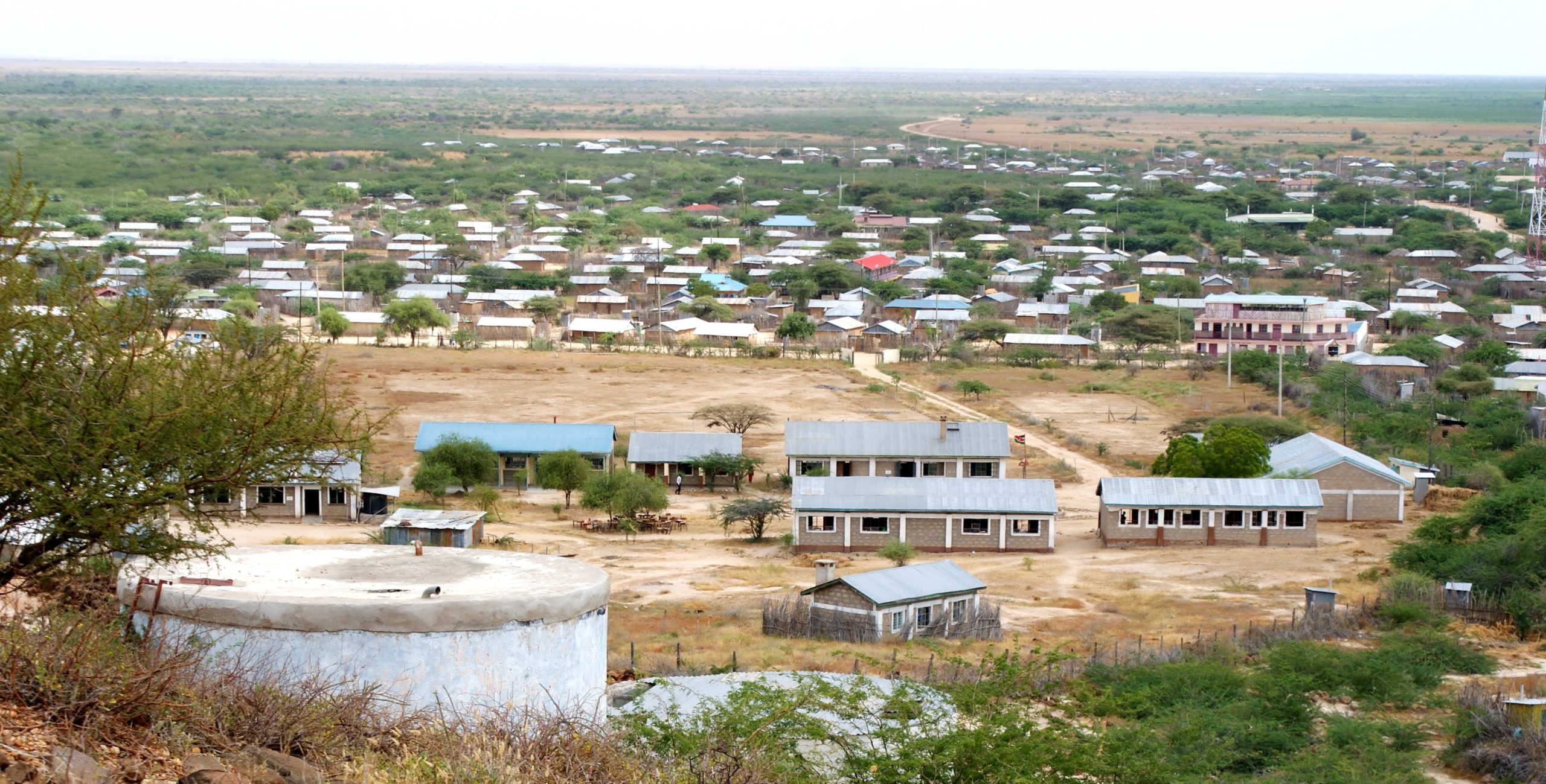 The company’s impact on the community wasn’t restricted to poor roads. Despite the CNOOC’s promises, many local residents struggled to get a decent wage.

Halima Kampicha, a local resident who worked for CNOOC as a cook for five months, said the Ksh4,000 ($40) she and others earned per month working over 15 hours per day for the company was exploitative and demeaning. CNOOC says it agreed it wages with the local community before hiring labourers, but would not comment on the amount it paid.

Kampicha now makes as much in her joint in Merti town, serving guests with food, drinks and accommodation. To run the joint efficiently, however, she must have an abundant water supply. This is not easy to come by.

Despite CNOOC’s promises to provide improved water resources, women leading donkeys with heavy vessels hanging over their backs still wander the parched terrain. Some of the women will be fetching water for traders like Kampicha. Others will be taking it home, after travelling for more than 10 kilometres from the nearest source.

Lengthy exposure to direct sunlight and the strain of walking long distances has been making many of the locals tired and vulnerable to disease. These ailments were expected to be improved by CNOOC’s investment, but the region continues to have scant health facilities, which seriously lack resources.

At one of the few hospitals, anxious patients watch carefully, waiting to shout down anyone who attempts to jump the line.

“Everyone wants to be served first before supplies are finished. This is because the hospital is always lacking drugs,” Kampicha, a mother of two, explains. “We do not know what the Chinese found and left with during the oil exploration exercise and we do not know what they deposited there. What we only know is that they left pain and suffering here.”

Wario claims that residents in the areas where CNOOC was exploring have been reporting increased cancer infections. According to him, a growing number of locals are being treated for throat cancer, a disease that he claims can be caused by exposure to toxic substances. And when livestock graze on pasture growing on the surface where underground material was dumped during the oil exploration, they die.

“When rain water washes over these soils, it drains into the water sources we use for drinking. Prolonged droughts, floods and invasive plant species have worsened. People are becoming sick and poorer,” he says.

CNOOC said “after the operation, the remaining materials of the well site together with the water well were donated to the local community”.

Thumbi Mwangi, an epidemiologist with the Kenya Medical Research Institute confirms that animals and humans can get sick or die if their bodies are exposed to heavy metals or anything that could harm their cells. Wider research is needed to confirm whether there is a link between cancer outbreaks and oil exploration, Mwangi says. But “if studies can establish the type of cancer that is common among the people who are exposed compared to people who are not exposed, then there is a probable connection between the increase in the number of cancer cases being seen and the exposure around emergent issues around oil exploration,” he says.

The community bears mental as well as physical scars from CNOOC’s time in the region.

According to Molu Tepo, a programme manager with the Merti Integrated Development Programme, the Chinese company treated locals harshly when they were exploring for oil, a situation that has left the community suspicious of outsiders. Apart from harassing locals, Tepo says, CNOOC would not allow livestock to graze near the sites they had mapped for oil exploration.

CNOOC did not respond to the harassment allegations, but said its operating sites were opened to herders to graze their livestock free of charge during droughts.

The experience has created a culture of fear in the community. In recent months, locals have been worried because of a suspicious aircraft that has been flying over the land, sometimes low enough to the surface to send scared herders and their livestock scampering for safety.

When they complained about the aircraft to the senior chief of Merti north, Abkul Godana Roba, he called his superiors in government who confirmed the aircraft was conducting official aerial geological for minerals.

“But the national government never consulted or informed my local administration that such an exercise would be taking place. I had a difficult time reassuring the people that the aircraft was not coming to take away their pasture land,” said Roba, who has worked as chief for 29 years. 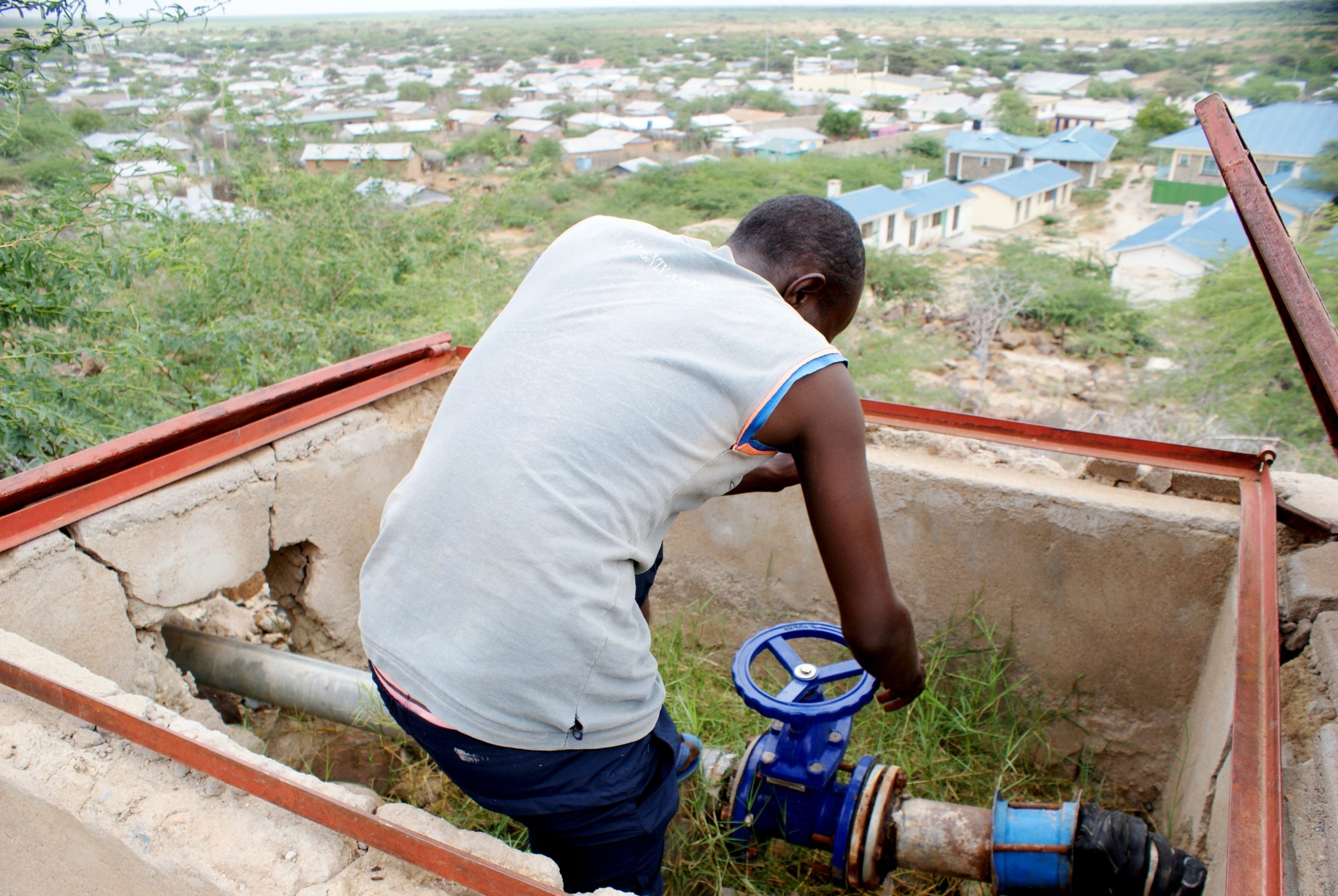 Image: A local plumber in Merti town checking whether a water storage facility there is working. © David Njagi

John Mosonik, the chief administrative secretary at the ministry of petroleum and mining confirmed that the Merti sweeps were part of nationwide airborne geophysical surveys. He added that the government has developed a management tool that will be used to guard the interests of communities living in oil and gas exploration sites.

One way the region can be healed from economic isolation is increasing the presence of both local and international NGOs in Merti and other marginalized parts of northern Kenya, argues Abdulaziz Jama, the programme manager at the Pastoralist Capacity Development Programme (PACDEP).

For instance, his organization has introduced table banking – a process where local residents contribute small amounts to a communal kitty – among herding communities to boost their economic security. It has also shown pastrolists how to bale hay to feed their livestock when drought sets in, he said.

But NGOs capacity to reach these areas is constrained by their need to get permission from the county government before starting their operations.

“The absence of the NGOs here has worsened a situation that has already made people destitute,” Wario says. “We need water, food, education and healthcare before we even begin talking about oil.”