Churches are increasingly vocal and progressive actors on climate justice. Yet regional groups of churches in the UK still have almost £18 million invested in fossil fuel companies, a DeSmog investigation co-published with New Internationalist can reveal.

In 2018 the Church of England’s national governing body, the General Synod, voted to divest from all oil and gas companies that are not on track to meet the Paris Agreement targets by 2023, with divestment starting in 2020. Yet it still has an estimated £123 million invested in polluting energy companies through the national Church Commissioners’ fund.

While the national picture is well known, analysis of funds held by the Church of England’s 42 dioceses – groups of churches who directly control their own investments – shows that they also hold £17.8 million in shares of fossil fuel companies, in addition to funds invested by the national body.

The dioceses’ most popular investment vehicle is through charity fund manager CCLA, and its Church of England CBF funds, which have a total value of £2.6 billion – and no ethical stance against investing in fossil fuel companies. Other dioceses invest in funds such as the ‘Charifund’ managed by M&G, and through managers such as Rathbone and Cazenove, which all continue to hold shares in fossil fuel firms.

DeSmog estimated fossil fuel investments by mapping data provided by the dioceses and from latest available annual reports, against the churches’ chosen fund vehicles’ investments in oil and gas companies.

A spokesperson for the Diocese of Oxford – which declared a climate emergency earlier this year – told DeSmog: “Clearly we have further to go,’ adding that they were ‘also looking at the overall carbon intensity of our investment portfolio.” The diocese has been reducing its fossil fuel investments and increasing its investments in renewable energy, they said.

A spokesperson for Leicester Diocese, which has an estimated £154,000 invested in fossil fuels said, ‘this is an important issue which we are grappling with,’ and confirmed its commitment to the Church of England’s pledge of reaching ‘net-zero’ emissions by 2030.

Earlier this year, the Oxford diocese agreed on a plan that includes urging the National Investment Bodies of the Church of England and the Church Commissioners to “prioritize investment in renewable energy”. The Bishop of Oxford, Rt Reverend Steven Croft, put forward an amendment at the General Synod in 2018 that argued National Investment Bodies should start divesting in 2020. 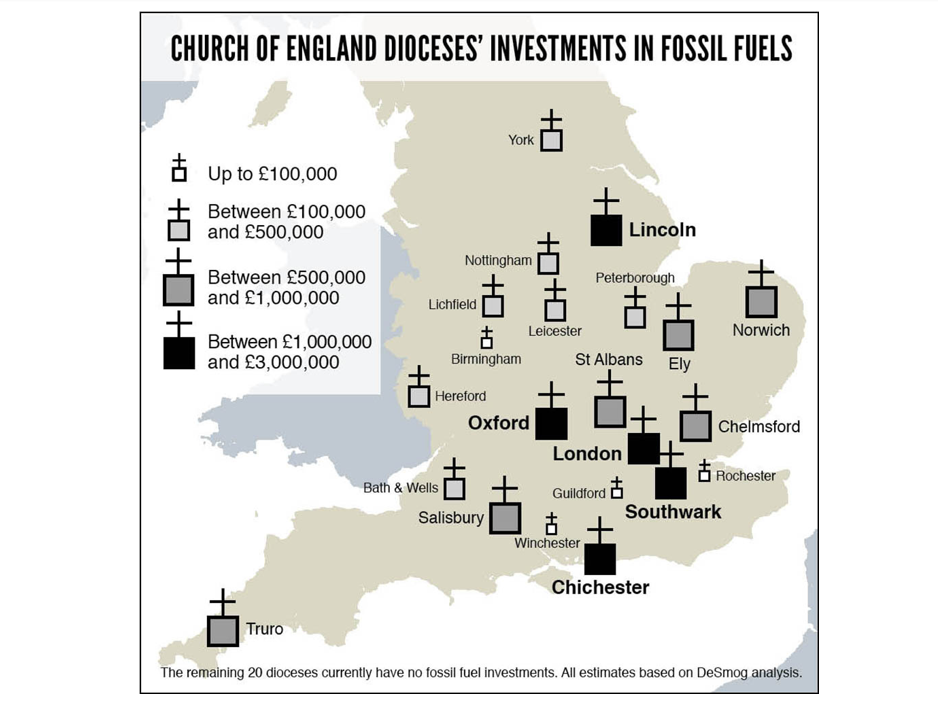 Reverend Dr Darrell Hannah, Rector for All Saints Church in Ascot, a parish church in the Diocese of Oxford and trustee of Christian climate charity Operation Noah, described the fossil fuel investments as “shocking”.

“We have to reinvest it in either green energy or other sustainable projects – the things that will fight climate change.”

“I would have thought that every single Diocese in the Church of England, if they are taking seriously their call to declare a climate emergency and be carbon neutral by 2030, they would have to be looking at their investments now.”

Dr Kat Kramer, Christian Aid’s Global Climate Lead agrees that churches need to act with more urgency: “It’s sad to see the Church of England continuing to profit directly from the climate crisis. The unique power that churches hold on fossil fuel divestment is not about hitting companies’ bottom line directly by changing the ownership of a few million shares. It is about stripping the moral license of fossil fuel companies and therefore undermining their social and political influence.”

“Church investors will not be able to claim to be on the right side of history if they just follow the crowd. By dragging their feet, they are wasting a unique opportunity.”

James Buchanan, Campaign Manager for Christian climate change charity Operation Noah highlights that several Churches and some Catholic dioceses have already committed to full divestment from fossil fuels. He urged “the Church of England dioceses, local churches and national Churches of all denominations to join them in getting out of the problem and into the solution.”

That may already be happening, but not necessarily due to churches deliberately pulling their investments out of fossil fuels. DeSmog recently revealed that CCLA has sold all remaining fossil fuel investments from the funds, making the whole CBF portfolio fossil-free. CCLA said the decision to sell the remaining Shell and Total investments in the CBF funds was for investment – not ethical – reasons.

The sales of those shares, brought an estimated £19.6 million invested by dioceses in fossil fuels down to £17.8 million. The CCLA’s sale of shares meant an estimated 20 of the 42 dioceses currently have no investments in fossil fuel companies, though the fund manager may buy such shares again, so the churches have not formally divested. The remaining 22 are still invested through other funds.

The Intergovernmental Panel on Climate Change in 2018 warned there would have to be massive and rapid transformations across societies to keep warming under 1.5°C, with dramatic cuts to fossil fuel use across all sectors. In response, the national church set the target of reaching net-zero emissions by 2030.

A spokesperson for the Church of England’s National Investing Bodies said the church continued to engage with oil companies rather than divest because ‘there is no easy escape from climate change as an investor.

“We must all transition to lower carbon business models, consistent with the goals of the Paris Agreement,” they said. The spokesperson did not clarify whether the Church of England is planning to divest from any fossil fuel companies in 2020.

The way the church chooses to approach this problem will “affect the future of humanity for thousands of years,” Operation Noah’s Buchanan says.

“What future will UK churches choose? Will they continue investing in the fossil fuel companies causing the climate crisis, or will they invest in the clean technologies of the future?”

The full methodology used by DeSmog and complete list of the 42 dioceses’ investments can be found here. You can find a full list of statements from the dioceses that responded to DeSmog’s investigation here.

Image credit © Andy Carter/New Internationalist. Updated 21 July 2020: The estimate for national church investments in fossil fuels was updated to £123 million, and it was clarified which investment vehicles these investments are made through.