Four Extinction Rebellion activists were arrested on Wednesday night at the end of a demonstration in Westminster against the influence of “right-wing climate sceptic thinktanks” on the UK’s political system.

The arrestees included former Green Party spokesperson and philosophy professor Rupert Read, who was removed by police after pouring fake blood over the entrance to 55 Tufton Street.

The word “lies” was also spray-painted on the front of the office building.

The central London address is home to several libertarian organisations with a history of opposing environmental regulations and downplaying the threat of climate change, including the Global Warming Policy Foundation and the TaxPayers’ Alliance.

Read said the “few still pretending that the climate and ecological emergency is not an existential threat to civilisation as we know it” were “yesterday’s men”.

The event was organised by Writers Rebel, a subgroup of the environmental activist movement that brought parts of the capital to a standstill last year and is currently staging 10 days of protests. Jessica Townsend, co-founder of Writers Rebel, was another of those arrested, along with two activists who had been perched on top of tripods for the duration of the protest, blocking the road to traffic.

Townsend said in a statement: “the fossil fuel companies, their lobbyists and other climate deniers are putting the welfare of people in the UK in danger, not to mention the billions in the Global South, by using the cynical tactics first used by the tobacco industry.” 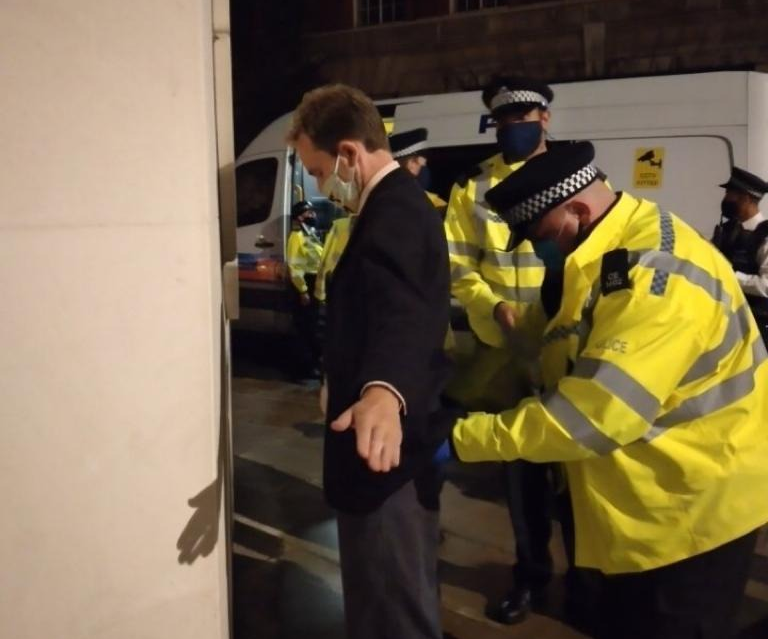 Rupert Read, Associate Professor of Philosophy at the University of East Anglia, being arrested outside 55 Tufton Street.

The action followed a series of speeches to the several hundred protestors present from leading writers and actors, including Zadie Smith, Sir Mark Rylance and George Monbiot, as well as the Green MP Caroline Lucas. Actor and writer Stephen Fry released a video in support of the protest earlier in the week.

In her speech, Smith said that the confusion around climate change had been “manufactured, targeted, organised and paid for, largely by oil companies and other vested economic interests who are prepared to sacrifice your long-term future for their short-term profit”.