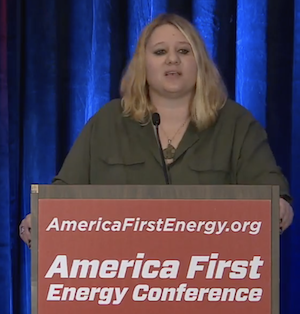 Amanda Maxham is a policy advisor at The Heartland Institute and former research associate at the Ayn Rand Institute. [2], [3]

According to her Heartland Institute profile, “Maxham writes, speaks and gives interviews for ARI on topics in science and environmentalism, such as genetically modified organisms (GMOs), DDT and pesticides, climate change and energy.”[2]

Maxham spoke at the Heartland Institute’s America First Energy Conference in 2018. Her profile there noted she “defends mankind’s moral right to use technology and supports the industrial capitalism that makes it possible” while “Amanda’s views offer a rational and exciting alternative to environmentalism.” [4]

[10:04] “The global average temperature has risen about a degree Celsius in the last 150 years or so. And human activity is responsible for likely most of that. We know also that fossil fuels make our lives better, incredibly better. So how do we judge whether this change in nature is good or bad?” Maxham asked during her presentation at the Heartland Institute’s America First Energy Conference in 2018. [5]

[12:55] “The greenhouse effect is real, and we need to consider carefully what affect the carbon dioxide has on our atmosphere because we care about individual human beings. About their prosperity and their safety. If it turned out that mankind was destroying our ability to thrive by burning fossil fuels, that would be a horrible tragedy. I don’t think that’s the case, but we need to think about the question and examine it for ourselves.” [5]

[02:55] “Yes, climate change is real. As you’ve heard at this conference, the facts are that the greenhouse effect is real, that human beings have increased the atmosphere. Concentration of carbon dioxide promote 270 to 400 parts per billion in the last 100 years or so, and the global average temperature has risen about a degree Celsius in the past 150 years. But carbon dioxide is a weak driver of warming and models that are used to back up the idea that we’re heading for a catastrophe are unreliable. They failed to predict anything in the past 30 years. So thinking about the ‘it’s a catastrophe’ package There’s no reason to think that we’re heading for a catastrophe.”

[53:18] “I view the anti-GMO movement is kind of a, you know, an offshoot or a part of the environmentalist movement. I really think it shows obviously and horribly what they’re, what they’re about or, or what they’re not about,” Maxham said in an interview with Alex Epstein to discuss “the Virtues of GMOs.” [7]

“The purpose of this event is to promote and expand energy freedom in the United States, as outlined in President Donald Trump’s bold America First Energy Plan, a proposal first released during the 2016 presidential campaign. The president’s plan marks a decisive change in direction from the Obama administration’s ‘war on fossil fuels’ and focus on the theory of catastrophic man-caused climate change,” the conference description reads. [9]

She spoke on a panel titled “Why CO2 Emissions Are Not Creating a Climate Crisis.” [4]

Maxham appeared on an episode of the Center for Industrial Progress‘s “Power Hour” with Alex Epstein to discuss “the Virtues of GMOs.” [7]

Maxham published a report entitled “The Gene Revolution” for the Center for the Protection of Intellectual Property (CPIP) at the Koch-funded George Mason University (GMU) School of Law. [10]

“Dr. Maxham explores how innovations in biotechnology, enabled by the intellectual property rights that protect them, have led to the ‘Gene Revolution,’ where scientists use genetic engineering to dramatically improve human life. In order to combat widespread misinformation about genetically modified organisms (GMOs), she traces mankind’s long history of improving plants, animals, and microorganisms to better serve our needs,” the paper’s description reads. [11]

Maxham has been a frequent author at the Ayn Rand Institute’s blog, and formerly edited its podcast. [12]

According to her profile at the Heartland Institute, Maxham’s scientific research has been published in astrophysical and astronomical journals. A search of Google Scholar confirms this. That search also returns zero publications written by Maxham in peer-reviewed journals on the subject of climate change. [13]