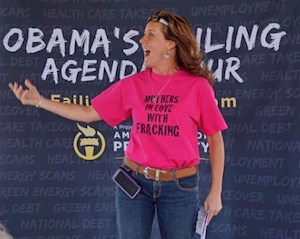 Amy Oliver Cooke formelry worked at the Independence Institute‘s Energy and Environment Policy Center as director and executive vice president. She joined the John Locke Foundation as CEO in 2020. [2], [30]

According to her profile at the Independence Institute, “Amy began working in energy policy in 2010. She is one of the few state-level, free market energy policy experts, and is famous for her provocative messaging like ‘Mothers In Love with Fracking’ and ‘I’m an energy feminist because I’m pro-choice in energy sources,’ which the eco-left called ‘hands down the worst kind of feminism’.” [2]

Cooke is also a former senior fellow at the Independent Women’s Forum (IWF). The IWF is a corporate-funded conservative think tank affiliated with the Koch group Citizens for a Sound Economy (CSE), later to become the Americans for Prosperity Foundation. [3]

Cooke was one of President-elect Donald Trump’s landing team members at the Environmental Protection Agency (EPA). [4]

Writing at a variety of news outlets, Cooke has consistently criticized actions by Xcel Energy in Colorado for its plan to move away from coal-fired electricity generation and towards natural gas and renewable energy. [6]

Cooke described the dismissal of climate lawsuits made by California and New York seeking damages from oil companies as “great news”: [5]

“The dismissal of these lawsuits is great news and a big win for those of us who use and benefit from fossil fuels every single day. In other words, everyone,” Cooke wrote at IWF.

“Welcome to Colorado’s dystopian energy and environmental policy, where we balance green fantasies on the backs of the working poor and at the expense of economic activity; where we destroy Colorado’s famous view sheds and ecosystems with millions of acres of industrial wind and utility scale solar in the name of climate change.”

“I don’t think I’ve ever written this, but thank goodness for the EPA! Well, actually, thank goodness for Administrator Pruitt’s announcement that he will “formally sign a proposal to withdraw the Obama administration’s Clean Power Plan,” as Politico reported,” Cooke wrote at the Independence Institute. [8]

“While we have slain one massive regulatory dragon, we still have another one – the four-headed Hick, Xcel, Eco-left, and state regulator dragon. So, our battle continues”

Cooke was quoted in an article at the Colorado Springs Gazette: [9]

“The beauty of this president is he’s not really an ideologue,” she said. “He’s a business guy and he wants results. This is the best time if you are an energy, or environmental policy, or free marketeer. If you have an idea that has results, there is no better time than right now.”

Cooke criticized Colorado’s preferred-energy policy in a column at the Greeley Tribune: [10]

“Affordable power is not mutually exclusive of clean power. Colorado should expand the definition of clean resources to include clean coal, natural gas, hydroelectric and nuclear. We also should encourage a least-cost principle and let consumers decide.

Anything else is just cruel.”

Amy Oliver Cooke, representing the Independence Institute, was a signatory to an American Energy Alliance open letter to President Trump, congratulating him for rolling back Corporate Average Fuel Economy (CAFE) standards and urging him not to cut a deal with California to allow them to operate with separate regulations. [31]

“Your efforts to reform this mandate will save consumers money, preserve their choices, and ensure that the federal government, and not a single state, sets national policy,” the letter reads. [31]

“The existing mandate makes cars more expensive. …  In short, because of the mandate, those consumers who prefer trucks, SUVs, or crossovers pay more to subsidize those who buy smaller vehicles or electric vehicles.” [31]

Amy Oliver Cooke, representing the Independence Institute, signed on to an open letter organized by the American Energy Alliance designed to fight against an electric vehicle tax credit. [28]

According to Pyle and others who signed the letter, electric vehicle tax credits “overwhelmingly benefit the rich.” DeSmog’s Koch vs. Clean project has systematically debunked this, among other well-rehearsed talking points and misinformation put forward by industry about electric vehicles. [29]

The letter cites research by the Pacific Research Institute (PRI), a group that has received over $600,000 from ExxonMobil and millions from “dark money” groups DonorsTrust and Donors Capital Fund. [29]

“The purpose of this event is to promote and expand energy freedom in the United States, as outlined in President Donald Trump’s bold America First Energy Plan, a proposal first released during the 2016 presidential campaign. The president’s plan marks a decisive change in direction from the Obama administration’s ‘war on fossil fuels’ and focus on the theory of catastrophic man-caused climate change,” the conference description reads. [12]

She spoke on a panel titled “Reforming EPA: Lots of Progress, More to Do.” [13]

“We oppose any carbon tax. We oppose a carbon tax because it would lead to less income and fewer jobs for American families,” the letter read. “We support the House Concurrent Resolution in opposition to a job-killing carbon tax and urge members to co-sponsor and support this effort.” [14]

The resolution would call a carbon tax “detrimental to the United States economy.”E&E News reported it was similar to a measure that passed the House in 2016. Rep. Carlos Curbelo of Florida, co-chairman of the Climate Solutions Caucus, said he would not vote for the resolution. [15]

“Protecting our environment and economic growth are not mutually exclusive,” he said in a statement. “The resolution presents a false choice.” [15]

The Citizens’ Climate Lobby (CCL) issued a point-by-point rebuttal of the measure when it was first introduced. [16]

Cooke was a speaker at the Western Conservative Summit in 2017. Other notable speakers included Scott Pruitt, Charlie Kirk, Candace Owens, and numerous others. [17]

Cooke is part of a “Coalition of Ratepayers” opposing Xcel Energy’s plan to switch to more renewable energy. “The company makes the wild claim that the plan will save ratepayers money or at the very least not cost anything. That claim is one of the reasons why my employer, the Independence Institute, is leading the Coalition of Ratepayers, a Colorado nonprofit concerned with issues affecting small business and residential ratepayers that otherwise have no advocate and no voice,” Cooke wrote at the Greeley Tribune. [18]

The Independence Institute describes the Coalition of Ratepayers as “a Colorado non-profit concerned with issues impacting small business and residential ratepayers that otherwise have no advocate and no voice.” [19]

A search of Colorado charities and various other nonprofit databases do not return any filings for an entity titled “Coalition of Ratepayers.” [19]

Cooke appeared on The Heartland Institute‘s podcast to discuss renewable energy with Isaac Orr. Audio below. [20]

Co-author of an article at The Denver Post titled “Like Obama, Hickenlooper using heavy-handed tactics on climate policy.” In the article, Cooke claimed the EPA‘s clean power plan was “backstopped by a cap-and-trade scheme,” and that Gov. John Hickenlooper (D) was “like Obama … intent on imposing climate policies over the will of the people.” [21]

Cooke wrote an article promoting SB17-188, a bill that would repeal an income tax credit for electric and some natural gas vehicles. “Special interest groups want to increase taxes. We say not another dime until legislators stop forcing taxpayers to pay for corporate welfare including rich guys’ cars and corporate fleet vehicles,” Cooke wrote, suggesting that “It’s fiscally irresponsible and morally reprehensible to subsidize the driving habits of rich people and corporations.” [22]

Cooke was named as a new landing team member for the EPA under President-Elect Donald Trump. [4]

The Hill noted that Cooke had a history of speaking against Democratic environmental polices in Washington and Colorado, and that she had described the EPA‘s clean power plan as “backstopped by a cap-and-trade scheme.” [23]

Cooke wrote a column that appeared in The Best of Greeley where she describes a close, personal connection to oil and natural gas Weld County. [24]

“Those of us who have the pleasure of living in Weld County know just how vital oil and gas is to our local community. Our relationship with the oil and gas industry isn’t us versus them. They are us,” her column begins.

“Together, we serve as a role model for the rest of Colorado. We trust our friends, neighbors, and family members who work in the industry to extract our precious natural recourses while preserving the integrity of our water, air and way of life.  And, so far, they haven’t let us down.”

[…] “But oil and gas doesn’t just extract resources from the ground. Because they are us, they also give back.”

Cooke doesn’t understand why anyone would regulate the oil and gas industry: “That’s why ballot measures to ban the industry, all of us by default and drive us into economic ruin via draconian regulations leave me scratching my head.”

She suggests that “elitist out-of-state activists are attempting to strip away private property rights” to limit drilling in Weld County.