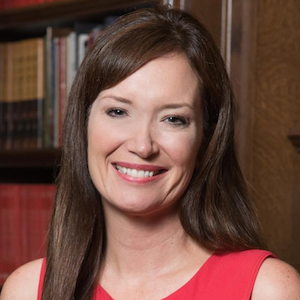 Brooke L. (Leslie) Rollins is the former President and CEO of the Texas Public Policy Foundation (TPPF), a conservative think tank that has pushed against climate policy in Texas. In 2018, she was named the director of Office of American Innovation as an assistant to President Donald Trump for Strategic Initiatives. [1], [3]

Before working at TPPF, Rollins was Governor Rick Perry’s Deputy General Counsel, and later his Policy Director. Her husband, Mark Rollins, is an executive in the energy industry. According to Bloomberg, a “Mark Rollins” is the Managing Director of Hillwood Development Company and Vice President of Business Development at Hillwood International Energy, L.P. [1], [4]

Following her graduation from the University of Texas School of Law, Rollins spent several years as a litigator for Hughes & Luce, L.L.P. She completed her federal judicial clerkship with the Honorable Barbara M.G. Lynn. [1]

As of May 2020, Trump was reportedly naming Rollins as acting domestic policy adviser, according to senior administration officials. “Rollins will lead one of the least visible but most crucial bodies during Mr. Trump’s time in office,” The New York Times reported. [24]

In her closing remarks for the TPPF‘s “At the Crossroads” summit, Rollins declared they had assembled some of “the greatest minds in the world” to discuss climate and energy issues. [6]

“Please know that while it seems as if we may be preaching a little bit to our choir, that we are also changing the world and the way a lot of people think about this issue, which is why we’re doing this.

“Everything you’ve heard over the last 24 hours about the indispensability of a free market in energy, and a resistance to the alarmism and hysteria of the climate change cult, is absolutely correct,” Rollins declared (emphasis added).

“There’s been no warming in over 17 years. So all of this discussion about shutting down certain parts of our energy industry is nothing short of a disaster for the economy,” Rollins said in an interview during a TPPF “At the Crossroads” energy conference. [7]

“What an amazing story to tell, without being a part of Paris climate agreements and Kyoto [Protocol] this and that, that we can in fact really help people and change lives and clean our air better than almost anyone else in the world is really one of the great untold stories I think of our generation, and thanks to so many of you in this audience who have really made that possible.”

Following the election of President Donald Trump, Rollins declared they were “winning” on issues including climate change: [9]

“We are winning, and a couple of years ago, it didn’t seem possible,” she said. “Most people thought it was going to be a really sad and dark and unfortunate time for the country, especially on [climate change]. There is great hope.”

Rollins appeared on the Stossel show to discuss leaked tax documents that had included information about TPPF donors. Rollins confirmed that the Koch brothers (Charles and David Koch) were among those on her group’s donor list. [10]

“Your donors know that, gee, if my name is publicized maybe I’ll be harassed the way the Koch brothers are,” Stossel commented.

Rollins responded: “That’s exactly right, and not surprisingly the Koch brothers were on our list as well as many other great Americans and entrepreneurs.” She added: “When Big Brother gets so big that they have to know everything about you to be able to give you everything you want, that begins the ruin of our country.” [10]

Rollins endorsed an idea proposed by National Security Council official Will Happer to present an official refutation of the 2018 National Climate Assessment, possibly going so far as to force scientists from NASA and NOAA to participate. [23]

Though there was pushback from some administration officials, efforts remained underway to create, at minimum, a series of white papers laying out the administration’s rejection of key elements of the NCA. [23]

“The scaled-back goal of the current plan is to provide a back-and-forth examination of climate science in which researchers who question mainstream conclusions about warming would perform equivalently with scientists representing the vast majority of experts who accept that human activity is raising temperatures. The exercise could produce a series of white papers from both sides, essentially establishing a formal record of climate contrarianism.

“The papers could act as a ‘correction’ or addendum to the National Climate Assessment released last year, according to one source.

“The National Climate Assessment has been peer-reviewed and is based on the work of hundreds of studies.” [23]

Those involved in talks about the initiative included John Christy and Judith Curry. Also, Paul Robinson—who E&E notes “oversaw talks about nuclear weapons tests with the Soviet Union during the Cold War but who is not trained in climate science”—would possibly lead the initiative. [23]

Rollins discussed carbon taxes in a YouTube video clip with Chip Roy. “The problem with renewables, the solar and the wind, is that it requires so much taxpayer subsidy,” Rollins claimed. [11]

“[S]upporters of a carbon tax are wrong. Carbon isn’t a commodity. And it’s not a form of injustice. It’s a building-block of life. Without it, plants, animals, and humans alike would not exist. Moreover, carbon-based fossil fuels have supported unmatched economic prosperity since the Industrial Revolution,” the video description reads. [11]

“The purpose of this event is to promote and expand energy freedom in the United States, as outlined in President Donald Trump’s bold America First Energy Plan, a proposal first released during the 2016 presidential campaign. The president’s plan marks a decisive change in direction from the Obama administration’s ‘war on fossil fuels’ and focus on the theory of catastrophic man-caused climate change,” the conference description reads. [13]

“How can you get books like hers into the school system?” Harris asked.  [13]

“I think that’s a great question, and one that a lot smarter people than I have been thinking about for a long time, but I think that’s exactly right. … It is a very difficult mountain to climb when the entire public education system is against those sorts of teachings, which we know to be right.

“And, however, what I do think — which I originally talked about, which is opening up the markets a little bit and giving kids a choice — that all of a sudden you see the market begin to work in that area and, you know, a lot of parents don’t love what their kids are being taught in some of these schools in terms of the economy and American history and the American founding, and what they’re teaching on governments and the environment, and so giving those parents the opportunity to find a place that maybe better aligns with what they believe to be true is really important. […]”  [13]

Rollins was a moderator and speaker at the “At the Crossroads IV Energy & Climate Policy Summit,” co-hosted by The Heritage Foundation and TPPF. Rollins also appeared on stage with then-EPA-Administrator Scott Pruitt, who was invited to the conference. [14]

Pruitt discussed how he believed that the new administration needs to “embrace a stewardship mentality” by making use of more natural resources, while “navigating the pathway to undoing these [Obama administration] regulations.” Pruitt highlighted recent accomplishments like undoing the Waters of the United States Rule, saying “what we’re doing is undoing those rules that were deficient.” [14]

“We as country need to ask ourselves, and we need to answer: what is true environmentalist? Is it truly prohibition? Is it to say that though we’ve been blessed with certain natural resources we shouldn’t use them? Or should we use those natural resources to feed and power the world and do so with environmental stewardship in mind? And it’s a very important question,” Pruitt said. “

[…] We need to embrace a stewardship mentality. And, to whom much is given, much is required. And use those natural resources we’ve been blessed with to bless others, both domestically and internationally. And we’ve got to have that dialogue.”  [14]

Brooke responded, “I love that,” moving to a question on Pruitt’s experience given he was “a complete Washington Outsider.” Pruitt said he is “so thankful to be serving the President, as I indicated earlier, because of his courage.”  [14]

“He’s made very, very courageous decisions,” Pruitt said. “He’s willing to take on the culture here in Washington and across the country. As an example, that is the Paris Accord agreement, to exit that. There was tremendous pressure brought on the President to stay in that, by the way, for no good environmental reason. It was a bumper sticker. Paris was a bumper sticker. It was not about CO2 reduction. It was about penalizing our own economy. And I could give you some information about that if you’d like, but the President made a very courageous decision to exit.” [14]

Rollins co-wrote an article at The Hill titled “Trump should kill the failing Paris agreement” with fellow TPPF staffer Chip Roy. In the article, Rollins and Roy claim, among other things, that the Paris climate treaty is “anti-American” and that that it is “designed to fail.” [15]

“Adherence to the Paris climate agreement would stall or preclude unleashing American energy, a prodigious stimulant for economic growth,” Rollins and Roy wrote.

They also argue that the climate treaty could “confound the global War on Terror” because it would reduce anti-terrorism funding.  [15]

“In his recent Saudi Arabia speech, Trump rightly declared that, when it comes to the survival of the free world, defeating Islamist terrorism is ‘history’s greatest test.’ Our potential success on that test is threatened by the staggering financial cost of supplanting fossil fuels that now account for approximately 90 percent of the world’s energy consumption.” [15]

Rollins was a speaker at the “At the Crossroads III Energy and Climate Summit,” an event co-hosted by the Heritage Foundation and the Texas Public Policy Foundation (TPPF). The event was billed as “the premier energy-and-climate policy event in America,” and attracted a range of prominent climate change deniers as well as a range of names connected to Donald Trump and his transition team. [16]

Doug Domenech, director of the Texas Public Policy Foundation’s “Fueling Freedom” project, wrote about the proceedings at The Hill. Domenech outlined the common climate change denial message shared among the speakers: “Is climate change real? Yes, it has happened in the past and will happen in the future. Is man making an impact on the climate? Perhaps but in very small ways. But the overarching consensus remains the climate change we are experiencing is by no means catastrophic.” [17]

“Attempts to intimidate CEI and our allies and silence our policy research are unconstitutional,” said CEI president Kent Lassman. “The First Amendment protects us and everyone has a duty to respect it – even state attorneys general.  CEI will continue to fight for all Americans to support the causes in which they believe.” [18]

Rollins introduced the TPPF‘s 2015 “At the Crossroads” conference. In introducing video remarks by Senator Ted Cruz, Rollins described him as a “very special friend” of the TPPF. Among those speaking at the conference was coal industry baron Robert Murray. In the past, Murray has described climate change as an “alleged phenomenon” based on “faulty science” and said that “the science is uncertain.” [20], [21]

According to her archived profile at TPPF, “Media appearances for Rollins have extended from local Texas newspapers to major international publications, in keeping with her imperative to the Foundation to be Texas-focused and nationally relevant. Her most recent major hits include a segment debating Texas versus California on Fox News’ ‘The O’Reilly Factor’ and ‘Hannity;’ Fox Business Network’s ‘Stossel;’ several guest spots discussing matters from energy policy to education reform to Aggie football on Bill Bennett’s nationally-syndicated radio show ‘Morning in America;’ and even a stint as guest-host of Salem radio’s ‘Mike Gallagher Show.’” [1]