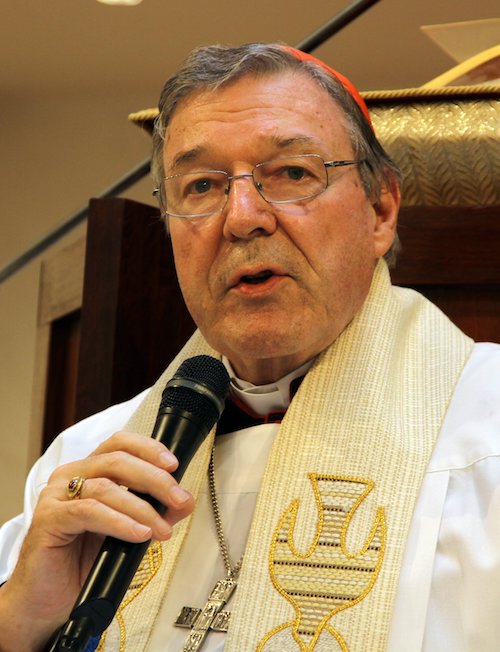 Cardinal George Pell is a senior figure in the Roman Catholic Church. He was recently found guilty of sexual offences in Australia in February 2019. The judgement makes Pell “the highest-ranking Catholic figure to receive such a conviction,” BBC News reported.  Pell has appealed the ruling. [22]

Pell is the former Archbishop of Sydney, and the head of the Vatican’s treasury. He was appointed by Pope Francis as Prefect of the Secretariat for the Economy, a position where he would “modernise and improve the Vatican’s financial processes to ensure they were more accountable and transparent.” Pope Francis removed Pell from his group of close advisers following sex abuse scandals, Reuters reported in December 2018. [2]

Pell has been described as a spiritual advisor to former Australian Prime Minister Tony Abbott. Pell and Abott also share similar views about climate change, having both given speeches at the Global Warming Policy Foundation, a UK think tank that questions the danger of man-made climate change. [3]

Pell first faced official sexual offence charges on June 29, 2017, three weeks after he met with US EPA Administrator Scott Pruitt in a dinner at the Vatican. [4]

Pell’s name was reportedly left off multiple versions of Pruitt’s EPA schedule during the Vatican trip. An email from an EPA staff member during the dinner suggested Pell and Pruitt had discussed a Wall Street Journal article reporting on the proposed “red team/blue team” debate on climate science. [5]

In a lecture entitled One Christian Perspective on Climate Change, delivered to the Global Warming Policy Foundation (GWPF) in 2011: [18]

“Mine is not an appeal to the authority of any religious truth in the face of contrary scientific evidence. Neither is it even remotely tinged by a post-modernist hostility to rationality. I reject emphatically the claim that most science can be dismissed or at least downgraded as socially constructed by the great and the powerful, although the enduring power of a paradigm, of established patterns of reasoning can help the self-interested to distort science for a time.

“My appeal is to reason and evidence and in my view the evidence is insufficient to achieve practical certainty on many of these scientific issues. Much less is there validation to justify huge public expenditure on these phantoms.”

“It is hostile and deceitful to claim that sceptics deny the reality of climate change. Everyone accepts that climates have changed over the centuries. The debate is about whether these changes are outside the regular patterns of the two Christian millennia, for example; and whether human activity is provoking a disastrous warming, or is even a powerful agent of temperature change. […]”

In fact, more and more evidence from long ago is suggesting we understand imperfectly why climates change, and that many factors as well as carbon dioxide contribute: for example, activity on the sun, the orbit of the earth and its wobbles, clouds, water vapour, oceans, volcanoes and bovine flatulence. Scientific evidence is not changed by governmental consensus, political will, or strong arm tactics,” Pell wrote in a column at the Sunday Telegraph. [6]

“The carbon dioxide in the atmosphere continues to rise, but the world’s temperature has not risen since 1998,” Pell wrote in a column at the Sunday Telegraph. [7]

Pell mentioned climate change in his speech at the Legatus Summit in Naples, Florida U.S.A: [8]

“Some of the hysteric and extreme claims about global warming are also a symptom of pagan emptiness, of Western fear when confronted by the immense and basically uncontrollable forces of nature. Belief in a benign God who is master of the universe has a steadying psychological effect, although it is no guarantee of Utopia, no guarantee that the continuing climate and geographic changes will be benign. In the past pagans sacrificed animals and even humans in vain attempts to placate capricious and cruel gods. Today they demand a reduction in carbon dioxide emissions.”

Pell publicly criticized Pope Francis’s choice to focus on climate change as a key issue, one month after the Pope released a historic encyclical on the environment that encouraged humanity to fight climate change. Pell told the Financial Times “the church had “no particular expertise in science.” [9]

“The church has got no mandate from the Lord to pronounce on scientific matters,” he said,

“We believe in the autonomy of science.”

In an article in The Australian, echoing a recent speech by Cardinal George Pell at the Global Warming Policy Foundation, Pell said that “the evidence is insufficient to achieve practical certainty” regarding climate change. He described the view that the science is settled as “ a cop-out, a way of avoiding the basic issues.” [10]

“The immense financial costs true believers would impose on economies can be compared with the sacrifices offered traditionally in religion, and the sale of carbon credits with the pre-Reformation practice of selling indulgences,” Pell added.

“Some of those campaigning to save the planet are not merely zealous but zealots. To the religionless and spiritually rootless, mythology – whether comforting or discomforting – can be magnetically, even pathologically, attractive”

[…] “Extreme weather events are to be expected. This is why I support the views of Bjorn Lomborg and Bob Carter that money should be used to raise living standards and reduce vulnerability to catastrophes.”

An Australian court rejected Pell’s appeal against his conviction for sex crimes against children, ensuring that the high-ranking Vatican official will continue to serve a six-year prison sentence. Following the judgment, Pell’s counsel was expected to enter another appeal to a higher court. [25]

Cardinal George Pell was charged with sexual assault, making him the highest-ranking Vatican official in recent years to face similar charges. His accusations include mishandling misconduct cases against clergy members while he served in the Archdioceses of Melbourne and Sydney. He also faced allegations that he had sexually abused minors during his earlier years in the priesthood. [11]

“Cardinal Pell has been charged on summons, and he is required to appear at the Melbourne Magistrates’ Court” on July 18, Shane Patton, the deputy police commissioner, said at a news conference.

Pell has denied the accusations on more than one occasion. A statement from the Archdiocese of Sydney said “he has again strenuously denied all allegations.”  [11]

Earlier that month, released documents showed that George Pell had joined EPA Administrator Scott Pruitt for a $240-per-head dinner. According to an email sent during the dinner, one EPA staff member said that Pell and Pruitt talked about a Wall Street Journal article that reported on the proposal for a “red team/blue team” debate on climate science. [12]

The documents were released by New York Times reporter Eric Lipton, and outlined planning for the dinner in May, and the schedule.

Here is a whole collection of documents assembled by The NYT that looks at this get together with Cardinal Pell–the planning for the dinner in May, the schedule from the actual dinner, and the official agency calendars. Just thought we would share it all. https://t.co/Dy2YotncMV

Lipton commented that Cardinal Pell’s name had been left off multiple versions of Pruitt’s EPA schedule for the Vatican trip. [12]

Kevin Chmielewski, Scott Pruitt’s former deputy chief of staff for operations, said in an interview with the New York Times that political appointees at the EPA had thought it would reflect poorly on Pruitt if the meetings had been made public. Twenty days following the dinner, Australian authorities charged Pell with sexual assault. He denied the charges. [13], [14]

“We should listen carefully to the social and ethical concerns raised by Cardinal Pell […] I believe that nobody has done more to raise these awkward questions within the Catholic Church than Cardinal Pell. It is an irony of our bewildering times that it is a courageous churchman who dares to question one of our society’s most entrenched dogmas – but that is exactly what he will do tonight.”

Crikey reported that, during the speech, Pell claimed that global warming has “stopped,” that CO2 was “not a pollutant, but part of the stuff of life” and that if carbon dioxide in the atmosphere was doubled, then “plants would love it.” An edited version of the speech was published at The Australian. [16], [17], [18]

Professor Andy Pitman, director of the ARC Centre of Excellence for Climate System Science at the University of News South Wales, described the speech as “a combination of irrelevant statements with statements that are utter rubbish.” [16]

In October of 2010, the Senate’s Environment and Communications Legislation Committee agreed to table a letter by Pell where he had quoted heavily from Plimer’s book, Heaven and Earth, and claimed there were “good reasons for doubting that carbon dioxide causes warmer temperatures.” [19]

View Dr. Ayers’ full response to Cardinal Pell here. In part of his critique, Ayers noted that Pell had erroneously listed Nitrogen as a greenhouse gas: [19]

“At one stage [Cardinal Pell] lists greenhouse gases. Included in the list is the gas nitrogen. That is not a greenhouse gas; it is 78 per cent of the atmosphere. You cannot have people out there telling the public that nitrogen is a greenhouse gas, because it is not,” Ayers said. [19]

“The cardinal I do not anticipate would be an expert in these fields of science, so he has quoted very heavily from this book and the book is, frankly, misleading to all Australians in terms of what it represents.

Why would I say this book is not science? It is not me who says it so much, although I have read it myself; it has been widely reviewed by people in the scientific arena and it has been very heavily criticised for not presenting science but presenting a polemic from one individual. It has not been scientifically peer reviewed.” [19]

Writing at the Sunday Telegraph, Pell accused scientists at the University of East Anglia of tampering with climate change data. Multiple independent investigations have exonerated those scientists from any wrongdoing in the wake of the so-called “climategate” incident. [15]

“It is a warning sign when one side begins to abuse their opponents, labels them as Nazis, fiddles with the evidence as at the University of East Anglia, and tries to censor and silence opposing scientific evidence and opinion, as has happened even in Australia. Those confident of their case do not need to bluster,” Pell wrote in the column. [15]

Pell wrote a column in the Sunday Telegraph where he claimed the “wheels are falling from the climate catastrophe bandwagon.”  In the article, Pell cites Ian Plimer for evidence. “Plimer is not a climate change denier, because history shows the planet is dynamic and the climate is always changing, sometimes drastically,” Pell wrote. [7]

Cardinal Pell is not active on social media, however there are several parody accounts associated with his name.

One of the key books about Cardinal George Pell is Cardinal: The Rise and Fall of George Pell by Louise Milligan and published by Melbourne University Press (May 15, 2017).  Lawyers defending George Pell later requested documents from Milligan relating to the book, ABC News reported. [21]