In the world of biochar business, it’s been mostly “talk” and little “walk.” Few biochar businesses have scaled up their operations in a serious way, despite big claims — with little scientific proof to back them up — about the substance’s climate change mitigation potential.

Cool Planet Energy System is seemingly the exception to the rule, with a December 2013 Forbes article hailing the company as one apparently “too good to be true.” The heaviest hitter making a bet on biochar, Cool Planet called its marketing strategy “the ultimate contrarian solution” at the 2013 North American Biochar Symposium attended by DeSmog in Amherst, Massachusetts.

“Cool Planet is addressing global accumulation of carbon dioxide emissions by transforming the fuel production process. Our carbon negative fuel cycle permanently removes CO2 from the atmosphere by sequestering biochar,” Cool Planet formerly boasted on its website. “This comprehensive process results in up to a 150% carbon footprint reduction.”

The video below details the company’s biochar approach and Cool Planet explains its ”carbon negative fuel cycle” in another video.

“[I]nstead of just leaving…agricultural waste to just rot on the ground, what we do is collect the leftover biomass and run it through the biomass fractionator which extracts useful hydrocarbon fuels such as gasoline and residual carbon called biochar,” Cool Planet details. “Biochar is highly porous and has beneficial water- and nutrient-maintaining capabilities.”

Straightforward enough. The claims, thereafter though, get steeper and some have taken them to task for making grandiose claims without backing them up with verifiable, peer-reviewed science.

“We take the biochar and process it to become a soil enhancer, which we place back in the ground,” Cool Planet continues (emphases mine). “This sequesters the carbon in the ground for hundreds of years, which makes the associated fuel carbon negative while building soil for growing more crops. The result is a new fuel production process called the carbon negative fuel cycle that permanently removes atmospheric CO2 while growing more crops and food and producing a clean, affordable and carbon negative fuel.”

With an investor list including the likes of General Electric, BP, ConocoPhillips, Exelon, and Google Ventures, one thing’s for certain: there’s big money — $100 million, to be precise — riding on Cool Planet’s success going forward.

“They are working on global problems, such as producing renewable fuels and removing of carbon dioxide from our atmosphere,” Bill Maris, a Google Ventures managing partner told The Verge of the deal. “It’s the kind of investment that we love at Google Ventures, because the vision is so big.”

Where is the scientific grounding for the grand claims made by the company’s principals? And is “success” measured in terms of Cool Planet’s quarterly profits or in terms of the company’s ability to use its product to mitigate climate change?

Despite the fact that, business-wise, the company is proceeding with haste, its science lags far behind, according to a 2014 investigative article published by The Verge.

At the 2013 North American Biochar Symposium, Cool Planet announced the launch of its biochar soil amendment product “Cool Terra,” a wordplay on the ancient Amazonian “terra preta,” a fertile soil enriched with a charcoal-like substance and produced by indigenous peoples of the Amazon more than 800 years ago.

Then, in December 2013, Cool Planet became the first ever biochar manufacturer certified by the International Biochar Initiative (IBI).

Wilson’s not the only one at the company making grandiose claims.

In a February 2012 Solve For X presentation, Mike Cheiky, Cool Planet’s founder and chief technology officer who has since left the company, said that if given three percent of the world’s landmass to produce its product and bring it to market, Cool Planet could reduce carbon emissions by 100 parts per million in the next 40 years. 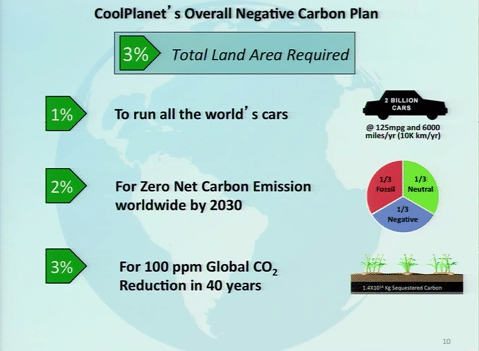 Cool Planet has received 13 different patents from the U.S. Patent and Trademark Office, with two pertaining to the company’s production of “negative carbon fuel” and another three centering around the production of renewable fuels using its technology.

For all the apparent promise of Cool Planet’s “Cool Terra,” there’s also an elephant in the room: the company’s scientific claims have never been peer-reviewed or even shown to the public, for that matter.

Asked for those results by DeSmog, Michael Rocke, Cool Planet’s then-vice president of business development, said they are a trade secret and can’t be shared. He did not respond to repeated requests for comment sent by DeSmog about the biochar offsets protocol submitted by International Biochar Initiative (IBI) shot down by the American Carbon Registry in 2015.

The 2014 investigative article covering Cool Planet’s rise to prominence by The Verge — which included interviews with over a dozen company insiders who spoke confidentially — concluded that the company, led by Mike Cheiky, uses “shoddy science” and shady business practices to lure in investment capital.

The piece also reveals Cheiky has a history of attracting initial investment money from venture capitalists and then after a few years, moving on to his next project.

“I’m the lab guy, I’m on to the next thing,” he told The Verge. “I’ve made lots of money, couple of yachts, lots of houses, and high-performance sports cars, but I really love working in the laboratory. That’s my mission. To be the first person to do something.”

Indeed, Cheiky has moved “on to the next thing” and now co-runs a start-up company called V-Grid Energy Systems alongside Rocke. V-Grid makes grandiose claims about its products in the same way Cool Planet describes its “carbon negative” potential.

Cool Planet has also signed on some “heavy hitters” to join its upper-level management team, which, in addition to the investment capital it’s received from big corporations, gives the company a veneer of legitimacy to the public and to investors.

Case in point: Archie W. Dunham, former president, CEO, and chairman of the board of directors of ConocoPhillips, sits on the board. Dunham sits on the board for Chesapeake Energy, one of the top producers of gas obtained via hydraulic fracturing (“fracking”) in the U.S. 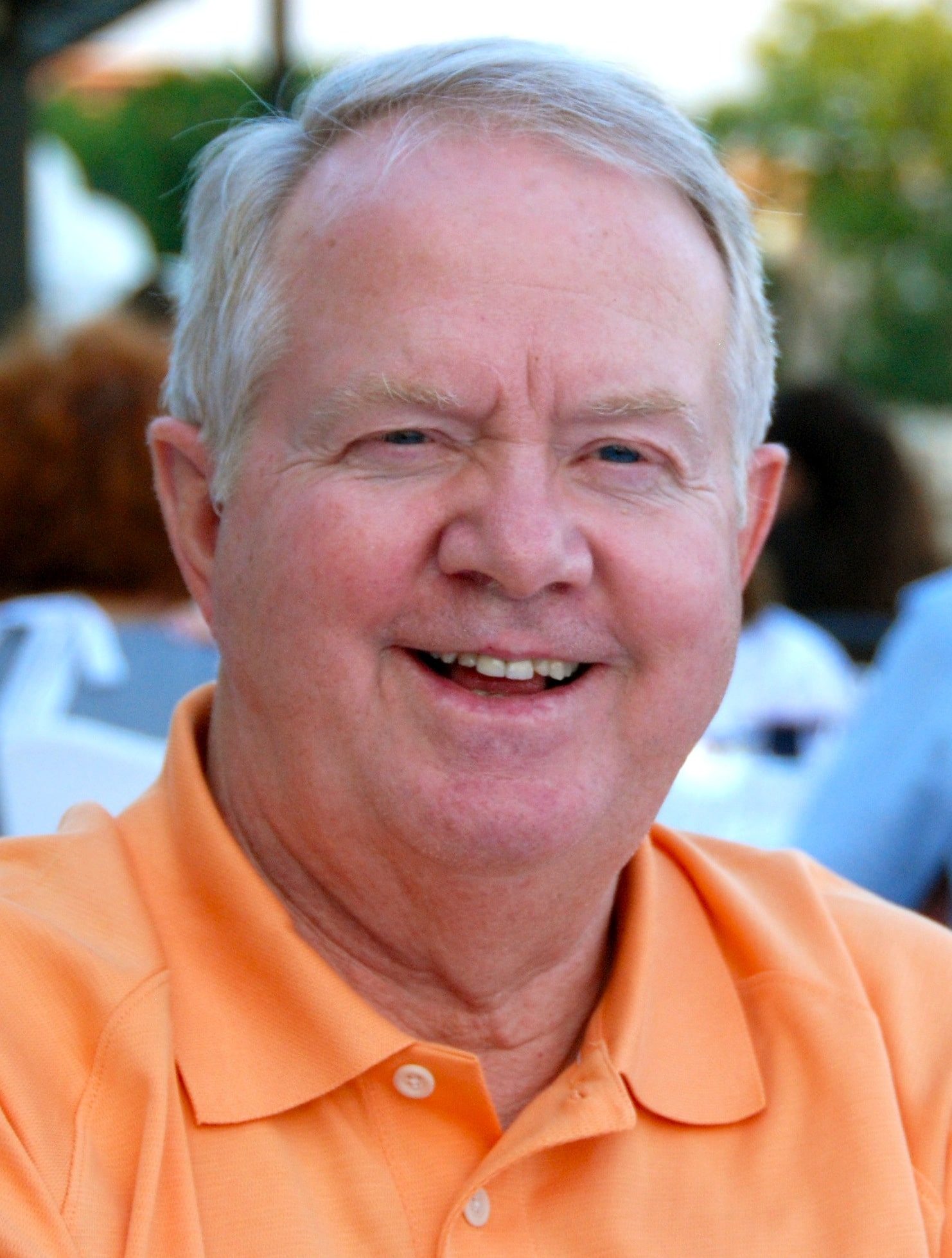 Bill Halter, former Lt. Governor of Arkansas and Democratic Party primary candidate for the U.S. Senate in 2010, is also a member of Cool Planet’s board of directors.

Big investors and big names are one thing. But the jury’s still out on the veracity of Cool Planet’s scientific claims.

One professor interviewed by The Verge (whom I also met with), William Banholzer — a senior advisor at the Wisconsin Energy Institute and research professor of chemical and biological engineering at University of Wisconsin-Madison — actually uses Cool Planet in presentations he gives as a case study of using scientifically “outrageous claims that defy common sense” while marketing its product.

“[People] see GE and these other big people put their money in,” Banholzer told The Verge. “Because these companies put their money in, [people] immediately jump to the idea, ‘Oh well they must know what they’re doing, it means there is something pretty good there.’ So I use Cool Planet as an example of ‘Don’t forget your engineering.’”

“They have a lot of investment guys, who are like bankers, and they don’t use their engineering talent to do due diligence.”

Regardless of the state of its science, Cool Planet received U.S. Department of Agriculture (USDA) BioPreferred certification for its Cool Terra soil amendment product in February 2016.

By Steve Horn
Steve Horn is a former Research Fellow and writer for DeSmog and a freelance investigative journalist based in San Diego, CA. He currently works as a climate reporter and producer for The Real News Network.