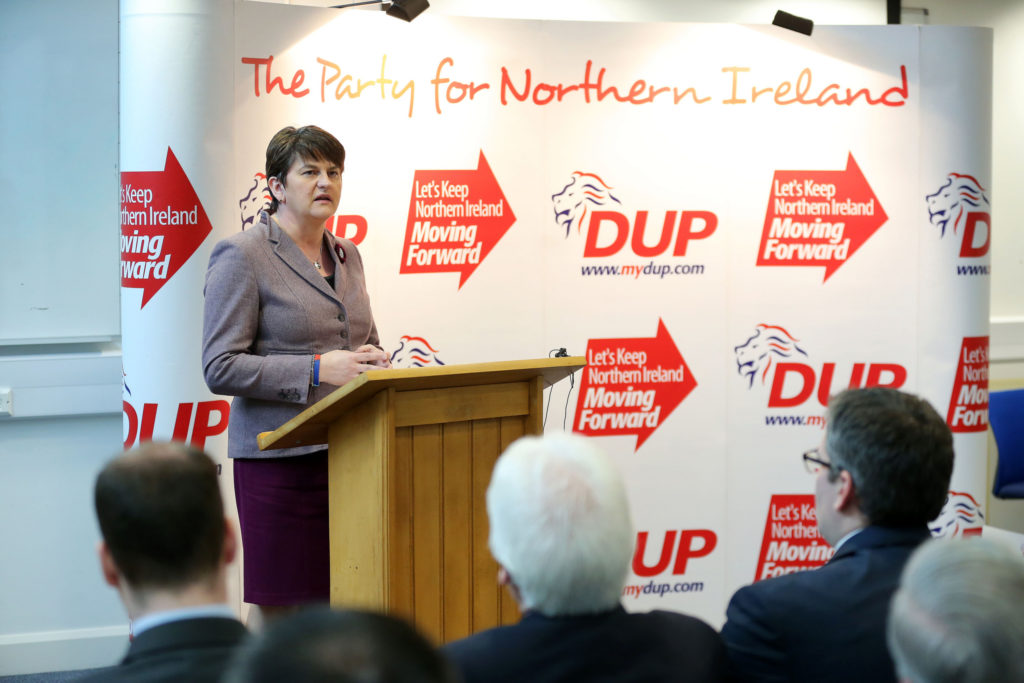 It has blocked efforts to pass a Climate Change Act in Northern Ireland, as well as having a history of supporting creationism and blocking legislation on abortion and gay marriage. It is the only political party in Ireland to support Brexit.

Through its former environment minister Sammy Wilson, the DUP has strong links to a network of individuals and organisations pushing climate disinformation and in favour of a “hard” Brexit.

The party was founded in 1971 by Ian Paisley and is now led by Arlene Foster. It has strong links to the protestant Free Presbyterian Church of Ulster, established by Paisley. It believes Northern Ireland should remain part of the United Kingdom and currently has eight MPs sitting in the UK parliament in Westminster.

The DUP, which campaigned to leave the EU, came under scrutiny following the Brexit referendum after it emerged that the party had received a £435,000 donation from a shadowy group called the Constitutional Research Council — the biggest donation in Northern Ireland’s political history.  The source of this donation remains secret.

In June 2017, the DUP agreed a ‘confidence and supply’ deal with prime minister Theresa May to provide her Conservative Party with the votes it needed to push major legislation through the House of Commons. The DUP received an additional £1 billion for projects in Northern Ireland in return for its support.

In November 2018, DUP MPs abstained in a Budget vote in a stark warning that the party would end its agreement with Theresa May if the Brexit Withdrawl Deal did not give a “fundamental” assurance that Northern Ireland would not be seperated from the rest of the UK after Brexit.

The DUP’s 2017 election manifesto contained not a single mention of the terms “climate change”, “global warming” or “environment”.

The manifesto spoke in general terms about the need for a “secure and sustainable energy supply for Northern Ireland”, with the focus on interconnection and development of new generation capacity, but with no indication given of the source of this new energy, other than welcoming “recent planning applications for new power stations” – a signal that it remains wedded to fossil fuels.

Former DUP environment minister and current MP, Sammy Wilson, on US President Donald Trump’s decision to pull out of the Paris climate agreement:

“… pulling out of the agreement which was only a piece of window dressing for climate chancers who wished to pretend that they were doing something about an issue which they can’t affect anyhow is not the disaster which the green lefties are getting hysterical about.

“What it might actually do is give us the opportunity to design a sensible energy policy which will help grow the economy, lift the burden of high energy costs off the shoulders of poor households and secure manufacturing and service jobs in energy intensive industries. The only losers will be those who are hoovering up billions of pounds of subsidies from hard pressed consumers.”

Senior Electoral Commission staff privately expressed concerns the DUP had broken UK electoral spending law during the Brexit campaign, according to openDemocracy. The revelations came weeks after the Electoral Commission announced it had closed the case against the DUP.

But internal emails obtained by openDemocracy in a freedom of information request show that there was little attempt to investigate allegations against the DUP of breaching electoral spending law and that senior staff were keen to swiflty “draw a line” under the issue.

The Electoral Commission announced that it will not investigate the DUP over allegations it coordinated its Brexit referendum campaign spending with Vote Leave in order to break legal spending limits.

Facebook data released by the parliamentary inquiry into Fake News showed that the DUP paid for targeted Facebook advertising during the Brexit referendum campaign. The adverts were arranged by the Canadian data firm Aggregate IQ, the same company which placed ads for Vote Leave, BeLeave and Veterans for Britain.

Vote Leave and head of BeLeave Darren Grimes were fined and reported to the police by the Electoral Commission after the watchdog found “significant evidence” of coordination over electoral spending between the two campaigns.

The DUP adverts were funded by a £435,000 donation from an unknown source and channeled through a group called the Constitutional Research Council, according to openDemocracy.

A BBC Spotlight investigation alleged that it had “uncovered a trail of illegal activity and foreign money” involving Richard Cook, the chair of the Constitutional Research Council which made the £435,000 donation to the DUP.

Cook, who denied the allegations, is also the former vice-chairman of the Scottish Conservative Party.

The programme questioned where the Constitutional Research Council sourced its own donation. Cook told Spotlight the money came from UK donors.

Labour Leader in Scotland Jim Murphy described the Constitutional Research Council as “probably the most secretive organisation in British politics”.

The DUP’s 2017 election manifesto contained not a single mention of the terms “climate change”, “global warming” or “environment”. It did contain implied commitments to new fossil fuel power plants.

It was revealed that in the run up to the Brexit referendum, the DUP spent £282,000 on a newspaper advert in the London Metro – which did not run in Northern Ireland – encouraging people to vote to leave the EU.

This was paid for through a donation of £435,000 from a shadowy group called the Constitutional Research Council, which is chaired by Richard Cook, a former vice-chair of the Scottish Conservative Party. The donation was the biggest in Northern Ireland’s political history.

OpenDemocracy revealed the Constitutional Research Council to have links to Saudi Arabia’s intelligence community and a gun running operation described by Indian authorities as “the biggest crime in the country’s history”.

The DUP’s environment minister Michelle McIlveen, quashed efforts to introduce a Northern Ireland Climate Change Act. The Social Democratic and Labour Party’s Mark Durkan described Northern Ireland’s failure to enact climate change laws – due to a lack of political consensus and obstruction by the DUP – as an “embarrassment”.

The DUP induced a political crisis in Northern Ireland through a “green energy” scheme.

Its ham-fisted implementation and complete absence of cost controls created perverse incentives whereby for every £1 a business spent on fuel, it received a government subsidy of £1.60. This quickly escalated into a massive scam, where furnaces were burning fuel around the clock in sheds with the windows and doors wide open.

The final cost to the taxpayer for this fiasco is expected to be upwards of £400 million.

DUP MP and environment minister at the time, Sammy Wilson, organised a meeting in the House of Commons in central London on behalf of “Repeal the Act”, a group that argues the “climate is always changing” and seeks to repeal the UK’s Climate Change Act. In attendance were known climate science deniers Peter Lilley, David Davies and Richard Tol.

A survey among DUP members found that 40 percent believed creationism should be taught in science classrooms.

DUP MP and environment minister at the time, Sammy Wilson, hosted a group of climate science deniers at the Palace of Westminster for “Climate Fools Day”. The event was supported by Labour MP and now Global Warming Policy Foundation member Graham Stringer. One of the event invites read: “The danger is not Climate Change but Climate Change Policy – for which there is no evidence in justification.”

DUP MP and environment minister at the time, Sammy Wilson, put a ban on UK government TV and radio adverts that were encouraging people to cut their carbon emissions. Wilson described the ads as insidious green propaganda.