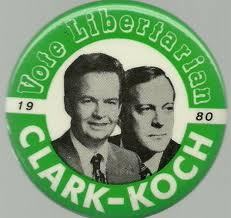 Clark received 920,000 votes in his 1980 run for president, about 1.1% of total votes cast, according to his profile at Libertarianism.org:

“Although the campaign was successful in some ways—it had gained respectful, if not plentiful, media attention, inspired some 300 Students for Clark organizations, distributed hundreds of thousands of copies of its campaign book, and placed no less than 47 five-minute ads on national television—the results were disappointing. Following the 1980 campaign, many of Clark’s key supporters appear to have lost interest in the party, and a number of them drifted away.”

According to a pamphlet from the 1989 Libertarian Party convention, Clark said he was first introduced to the Libertarian Party in February 1972 “when I received a barely legible questionnaire asking the question, ‘Would you like to be chair of the LP in your state?’ After considering this with my wife, Alicia, I accepted and we started the Free Libertarian Party of New York in our living room a few weeks later…

“When I ran for President in 1980, these factors, along with very generous contributions from David Koch, the Vice Presidential candidate, produced the largest number of new recruits and the highest vote total of any campaign to date.”6“1989 Libertarian Party National Convention Pamphlet,” KochDocs, Archived .pdf on file at DeSmog.

The New York Times noted in a 2014 editorial that by running for vice president alongside Clark, David Koch was able to take advantage of a loophole in the U.S. Supreme Court’s Buckley v. Valeo decision. This loophole allows candidates for office to spend unlimited amounts of their own money on their own campaigns.7Nicholas Confessore. “Quixotic ’80 Campaign Gave Birth to Kochs’ Powerful Network,” The New York Times, May 17, 2014. Archived September 17, 2019. Archive.fo URL: https://archive.fo/Bj4lC

Ed Clark and David Koch were nominated at the 1979 Libertarian Party convention. A document summarizing the convention noted that Koch had kicked off the Clark/Koch campaign with a $500,000 donation. The editorial suggested that “there was some resentment at the convention at what seemed to be the outright purchase of the nomination…[T]here is more fear among some Libertarians that the Koch family is in the process of purchasing the Libertarian movement itself.”9“1979 Oklahoma Libertarian Party Newsletter on Views that David Koch ‘Bought the Nomination’ to Run for VP,” KochDocs. Archived .pdf on file at DeSmog.

A 1980 fundraising letter by an oil broker mentions that David Koch was able to contribute the half-million dollars to the campaign through a “loophole in the FEC regulations.”10“1980 Oil Broker’s Fundraising Letter Lauds ‘Loophole in the FEC Regulations’ to Allow David Koch to Spend ‘Several Hundred Thousand Dollars’ on the Libertarian Party,” KochDocs. Archived .pdf on file at DeSmog.

“You may know or know of the Koch family of Wichita, KS. David Koch is Ed Clark’s running mate, and through a loophole in the FEC regulations is able to avoid the contribution limits placed on PACS and Individuals. David is personally contributing at least $500,000 to the Clark campaign,” Steve Buckstein of the Clark for President Finance Committee wrote to Jerome Lewis of Petro-Lewis Oil Income Partnerships. 11“1980 Oil Broker’s Fundraising Letter Lauds ‘Loophole in the FEC Regulations’ to Allow David Koch to Spend ‘Several Hundred Thousand Dollars’ on the Libertarian Party,” KochDocs. Archived .pdf on file at DeSmog.

In the prepared remarks for a May 31, 1980 campaign speech, David Koch outlined how Ed Clark would dismantle energy industry regulation if he won the election:12“1980 David Koch: ‘Free Up the Energy System’,” KochDocs. Archived .pdf on file at DeSmog.

“If Ed Clark is elected President he will let the free market work…[H]e will eliminate all subsidies to energy producers. Oil companies and other energy firms should have to make it on their own without shifting their risks to the taxpayers.

“Specifically, a Clark administration will abolish the Department of Energy, whose only functions are to interfere with energy production and distribution and hand out subsides. We will repeal all price and import controls, allowing supply and demand to set energy prices.”

“Is there a place for solar, wind, and other alternative energy sources in America’s future? Only a free market can tell us…[I]f these forms of energy are economically viable, they will be developed in a free market.”

A December 6, 1979 memo from Chris Hocker, the head of the Libertarian Party, urged Koch Industries executive Sterling Varner to max out his contributions to Clark’s political campaign at the direct request of David Koch.14“1979 David Koch’s Request to a Koch Industries Exec to Max Out Personal Campaign Contributions, plus Michigan Ballot Information,” KochDocs. Archived .pdf on file at DeSmog.

The following excerpts are taken from a 1980 correspondence between a reporter and the Clark for President campaign, in which Ed Clark responded to questions about environmental regulation:15“1980 Ed Clark Campaign Position Statements Opposing All Regulation of Energy and All Environmental Laws,” KochDocs. Archived .pdf on file at DeSmog.

Q: “How would you achieve a balance between the need for economic growth and protection of the environment?”

A: “Present government-imposed environmental standards are arbitrary, haphazard, inconsistent, and political. Agencies are criticized by environmentalist for being slow to respond to problems, and by businesses for imposing costly and cumbersome regulations- and both complaints have much validity. I favor a totally different system whereby individuals and groups can file suit against polluters, prove damages, win compensation, and enjoin polluters from continuing to pollute; such a system is based on strict enforcement of property rights. At present, government has the sole power to determine the acceptable level of pollution. This fails to protect consumers, who have no recourse if the level is set too low and it fails to protect industry, which is often forced to comply with burdensome regulations. Economic growth and environmental protection will both be better protected by a system of private legal action to uphold property rights than by government standards.” (Emphasis added.)

“In the field of energy, as in every other field, that government is best which governs least. I advocate the abolition of the Department of Energy — whose annual budget is greater than the after-tax profits of all the major oil companies combined — and an immediate end to energy subsidies, price controls, and all government allocation programs. If we ended price controls and allocation programs, allowing prices to reflect real conditions of scarcity in the world today, there would be no shortages of oil and gas, and individuals would be free to conserve energy in way that they — not the authoritarian government — find agreeable. For decades now, government involvement in energy has lead [sic] to a steady, progressive worsening of our energy problems. Only a sharp move away from government domination and towards a truly free market in energy can solve our energy crisis — a crisis made in Washington.”

Other campaign materials showed Clark advocating for elimination of the minimum wage:17“1980 Brochure of Clark Campaign Calling for the Elimination of the Energy Department and the Minimum Wage, and More,” KochDocs. Archived .pdf on file at DeSmog.

“The elimination of the proposed $8.7 billion for the Department of Energy would lower taxes and help revitalize our domestic energy industry. America needs free market energy. Instead, the Carter Administration proposes a windfall profits tax that will take over where stifling price controls and the perverse entitlement system left off. This new tax will continue to make it more difficult for domestic exploration and drilling operations to compete with foreign crude, and will help fund a corporate welfare package for synfuels and an Energy Security Corporation.

“We do not need a $13 billion Department of Education. We need tax credits for anyone who sends a child to a private, voluntary school. This will give the poor and middle class a choice for the better education of their children.”

“There’s nothing wrong with America’s energy problems that deregulated, decontrolled private enterprise can’t cure,”  proclaimed a Clark for President campaign ad published on May 5, 1980. “One of my first priorities as President would be to abolish the Department of Energy.”21“1980 Ed Clark Oil and Gas Journal Ad,” May 10, 1980. Retrieved from DocumentCloud. Original document contributed by Climate Investigations Center, via University of Virginia’s Albert and Shirley Small Special Collections Library.

Just a few years before he became Ed Clark’s running mate on the Libertarian ticket, and the campaign’s main funder, Charles Koch argued for the elimination of the DOE in the Libertarian Review.23“1980 Ed Clark Oil and Gas Journal Ad,” May 10, 1980. Retrieved from DocumentCloud. Original document contributed by Climate Investigations Center, via University of Virginia’s Albert and Shirley Small Special Collections Library.

There are no known social media accounts for Ed Clark.