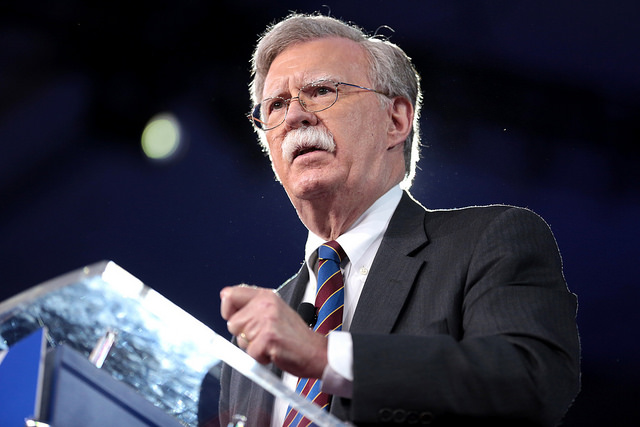 John Bolton is a Republican attorney and former US ambassador to the UN under President George W Bush. [2], [3]

He was appointed national security advisor to President Donald Trump and started his tenure on 9 April 2018. [4]

Bolton is connected to some of President Trump’s biggest financiers. He received millions through his Super PAC from billionaire businessman Robert Mercer, the man who bankrolled the Trump campaign, and worked with data firm Cambridge Analytica. [5], [6], [7], [8]

Until his appointment as an advisor to President Trump, Bolton held a senior fellowship at the American Enterprise Institute, which is funded by fossil fuel magnates the Koch brothers, notorious for backing climate science denial worldwide. [9]

Bolton has made no secret of his contempt for the EU and has publicly called for a hard Brexit which would allow the UK to slash regulations and strike its own free trade deal with the US. [10], [11], [12], [13]

He has strong ties with the Leave campaign in the UK, having met with leading members of the pro-Brexit European Research Group of MPs in July 2018. He was pictured with Daniel Hannan at the Vote Leave headquarters on the night of the referendum result. [14], [15]

A pro-guns, pro-war advocate, Bolton was described by Financial Times columnist Simon Kuper as “possibly Washington’s most aggressive hawk.” He has held roles in a number of right-wing think tanks and organizations including the National Rifle Association and the Gatestone Institute, which is known for spreading misleading and false anti-Muslims news. Bolton served as the institute’s chairman from 2013 to March 2018. [16], [17], [18], [19], [20]

In September 2015, Bolton was also appointed senior advisor at the Freedom Capital Investment Management company to advise the firm on international security, financial and political risks. The company was known for its rejection of socially responsible investments in the name of ethical or environmental reasons and boasted about its portfolio in oil, coal, and the gun industry. [21], [22]

In a press release sent from the 2015 Paris climate summit, the company claimed the Paris Agreement would have “a negative impact on the US economy” and rejected fossil fuel divestment. [23]

“We aim to invest in the same companies stranded by COP21 outcomes and fossil fuel divestment. From our perspective, the more competitors we gain on our side of the ledger, the better chance the US has to survive these UN-driven assaults on our economy. And the market is there, but time is not on our side,” it wrote. [23]

Bolton has also been a regular contributor and political commentator on Fox News. [25]

Bolton has been a long-time critic of international efforts to reduce emissions and tackle climate change, accusing the UN climate talks of using global warming as an excuse to establish supranational structures of governance. [26]

“The overall affect on climate [of the Paris Agreement] by any reputable scientific analysis is zero […] this is really a global governance issue.” [26]

Bolton hailed President Trump’s intention to withdraw the US form the Paris Agreement “an excellent decision.” [26]

“Even if you buy the President’s beliefs about man-made causing of global warming, the outcome of this Paris Agreement will be insignificant. [27]

“They are attending a church service about climate change and he was just giving the last sermon.” [27]

In an interview with The Daily Beast, Bolton said:

Bolton has said he believes the issue of climate change is being used by some politicians as a means to “pursue greater governmental control over energy policy and human activity. [28]

According to Bolton, environmentalists “would have exactly the same policies if there was global cooling instead of global warming” and are “fundamentally statist.” [28]

Speaking to Fox News about President Trump’s intention to withdraw the US from the Paris Agreement:

“It’s an excellent decision. The Paris Accord is a self-licking ice cream cone. In the short-term its existence would have next to no effect. The danger was in the longer term. [26]

“What they wanted was an agreement on anything to create the foundation for what they are really interested in which is more international control over national decision-making. This is really a global governance issue, which the Europeans just love and Barack Obama just loves. [26]

“We are not going to engage in more blue smoke and mirrors in order to get to more international control. [26]

“The fundamental point is that we could be dealing with global cooling here. If the overall objectives was to put more carbon emissions to increase the earth’s temperature, these people would be asking for the same structures. The overall objective is more international governance and less national sovereignty.” [26]

A right-wing libertarian, Bolton has repeatedly advocated for a low-tax, low-regulation society which would include cutting food and environmental regulations. [29]

For example, in an interview with The Objective Standard, Bolt said:

“I think that, in terms of choice of government, what we should look for is a government that enhances the possibility of individual freedom and individual activity and reduces the potential for collective government action.” [29]

Bolton wrote an article for The Wall Street Journal criticising US President Joe Biden’s climate change plans. He stated: “The trade-offs are complicated and the politics are difficult and uncertain.” [45]

Bolton argued that taking action on climate change put the US in a disadvantageous position regarding its geopolitical relationship with China, stating: “In Beijing’s eyes, this makes Washington the demandeur—in diplomatic parlance, the one asking for something. It is never a preferred position in negotiations. You want China to take action on climate change? asks Xi Jinping. Let’s talk about what you’re going to give to get it.”

Nearly 100 internal documents were leaked to Axios in 2019. As Axios reported, the documents identified a host of “red flags” about many individuals who would go on to work in the Trump administration, as well as others who were considered but failed to secure a position. [44]

Bolton was listed among the documents. Some notable samples from the internal documents below:

“In A 2012 Interview, Bolton Called Obama’s Foreign Policy ‘Limp Wristed’ A Term ‘Usually Used As A Slur Against Or Allusion To Gay Men…’”

“While Bolton Was Critiquing Obama’s Iran Policy At The 2009 CPAC, He Made A Joke About Iran Nuking Chicago, Saying Maybe Obama Would Take The Iran Threat Seriously If That Happened.”

“In 2005, USA Today Reported That Bolton ‘Threw A File Folder And A Tape Dispenser At An American Business Woman In Moscow, Disparaged Her Weight And Alleged She Was Gay In An Attempt To Get Her To Withdraw Criticism Of A Foreign-Aid Project…’”

“During his time as U.N. Ambassador, Bolton was accused of bullying career State Department officials and those who challenged his views. Bolton also was accused of accosting women during overseas trips.” [44]

Axios revealed Bolton spoke regularly on the phone with International Trade Secretary Liam Fox and Transport Secretary Chris Grayling — two hard-Brexiters inside Theresa May’s cabinet. A source inside May’s government is reported to have told the website’s Jonathan Swan: “John is a strong believer in Brexit and has been encouraging the Brexiteers to keep it up.” [30]

Bolton met then President-Elect Jair Bolsonaro in Brazil and hailed him a “like-minded partner.” In a tweet, Bolton said he had invited Bolsonaro to visit the US on behalf of President Trump. “We look forward to a dynamic partnership with Brazil,” he added. [31], [32]

The US House Committee on Oversight and Government Reform wrote a letter to the White House Chief of Staff demanding information be released on Bolton’s security clearance. The committee said it wanted to know whether Bolton had reported his previous work in his capacity as a top official with the National Rifle Association with Maria Butina, a Russian citizen who was exposed as a spy. Butina was arrested in July 2018 for acting as a Russian agent inside the US. [33]

Bolton told Fox News President Trump’s decision to withdraw the US from the Paris Agreement was “an excellent decision.” [26]

Bolton met with the unofficial Leave.EU campaign at the Republican National Convention in Cleveland, Ohio, including Nigel Farage. Andy Wigmore, a businessman and prominent associate of Farage and Arron Banks, the campaign’s main funder, was also present at the Convention. [35], [36]

Bolton also attended the private dinner hosted by Theresa May for Donald Trump at Blenheim Palace, Oxfordshire. He was pictured with his UK counterpart, the Number 10’s national security advisor Mark Sedwill. [37]

Bolton was pictured with senior Vote Leave campaigner and MEP Daniel Hannan at the Vote Leave headquarters on the night of the EU referendum results. [15]

Speaking on Fox News after the referendum result, Bolton said: “Britain can now rid itself of the sclerotic over-regulation of the Brussels bureaucrats. It can reduce its taxes, reduce regulation, be a much more attractive place for foreign investments. [12]

“The European Union has never been about business and economics. It has from its inception been a political project to form a united Europe as an alternative pole to the United States and that project is now on the road to failure.” [12]

Bolton made an appearance at a round-table organized by The Right to Bear Arms in Russia, a group whose leaders Maria Butina and Alexander Torshin are under investigation by Special Counsel Robert Mueller. Bolton was making the case for the Russian Constitution to be amended and allow broader gun rights. The meeting was organised by Butina, who was later exposed as a Russian spy inside the US. [13]