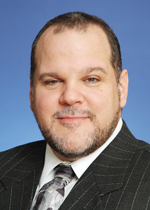 Kenneth Green is an Environmental Scientist and Senior Director, Natural Resource Studies, at the Fraser Institute. He formerly served as Resident Scholar with the American Enterprise Institute (AEI) where he “studies public policy relating to climate change and energy.” [1], [2]

Green’s profile at AEI describes him as an “Expert Reviewer” of the United Nations Intergovernmental Panel on Climate Change, Working Group 1, 2001. All this really means is that Green asked to see a draft IPCC report and agreed not to publicly comment on the draft.

“This is not to say that man-made climate change theory is either right or wrong, proven or not proven, looming catastrophe or massive hoax—only that it is not, as various groups have implied, nearing a final verdict.” [3]

“I’m typically skeptical about proposals for massive, widespread deployment of wind and solar power. My problem with the idea is that these sources are intermittent, meaning we need to maintain 100 per cent backup power that we don’t intend to run much of the time, in the absence of better storage.” [23]

“The real problem with Alberta’s carbon cap is that, like much of the Alberta Climate Leadership Plan, it’s arbitrary, and the government seemingly failed to do any meaningful analysis of the potential costs and benefits of the action. […]

Governments should take uncertainties out of the equation to the extent they can, not dropping in arbitrary caps whose uncertain impact can only increase uncertainty about future oilsand production.” [25]

“Green groups, and some anti-gas First Nations, may continue to successfully stymie Canadian resource development but it will come at a high cost to Canadians, and potentially the environment.” [26]

“[T]he new energy tax will not significantly offset predicted future global warming. Shutting down Canada entirely wouldn’t do that. […] This is a lose-lose proposition.” [27]

“We can expect the climate crisis industry to grow increasingly shrill, and increasingly hostile toward anyone who questions their authority.” [20]

“The climate’s sensitivity to greenhouse gases is considerably lower than the Intergovernmental Panel on Climate Change claims—so much lower, in fact, that the warming we would expect from doubling the amount of carbon dioxide in the atmosphere would be quite modest and offer very little risk.”  [4]

“If the president simply acknowledges that humans are probably causing some climate change, that warming will likely continue, and that warming might pose serious challenges for human societies and ecosystems, his epiphany will be a bit late, but at least reasonable. Whether liberal or conservative, thoughtful analysts have recognized this for over a decade now. But if the president’s realization involves some massive scheme of action to enlarge the scope of government interference in energy markets, he may well be taking aim at the goose that lays the golden egg–our economy is fueled by abundant, low-cost energy.”  [6]

“Here’s the problem – carbon dioxide doesn’t contribute to smog and isn’t a health threat. All of this is being done because some people believe carbon dioxide is causing global warming, and that preventing carbon dioxide from entering the air is the only answer. Never mind that there is still an ongoing scientific debate about global warming itself, and that some respected climate scientists believe that methane is a better target, California legislators have locked their sites on carbon dioxide.” [5]

Kenneth P. Green is a co-author of The Fraser Institute;s “Global Petroleum Survey” for 2016. Other authors included Taylor Jackson, and Kyle Sholes. [13]

According to the Fraser Institute press release, the report surveyed petroleum industry executives and managers “regarding barriers to investment in oil and gas exploration and production facilities in various jurisdictions around the globe.”

Writing at the Fraser Institute’s blog, Kenneth P. Green suggests what he believes Donald Trump’s election could mean for Canada, suggesting that Canada could become less competitive due to more aggressive climate change policy. “Well, for Canada there’s actually a bit to like” Green writes. “For Canada’s governments, perhaps not so much.” [24]

He describes Trump’s proposed energy policy as “mixed blessings for Canada’s energy sector.” With regards to Canadian climate change policy, Green notes Trump’s pledge to drop the Paris climate change agreement “which means the U.S. will not be ‘following Canada’s lead’ on a national carbon tax or cap-and-trade system.”   [24]

Green suggests that “Canada’s current aggressive climate action plans could well put our environmental policies (and the viability of our energy sector) at odds with our massive neighbour to the south.” He contends that “This could not turn out well for Canada’s competitiveness.”  [24]

Kenneth P. Green co-authored an article in the Toronto Sun describing the Ontario Governments suspension of renewable energy as a “step in the right direction” as “ the province’s ‘green dreams’ have resulted in serious consequences for Ontarians and their families.” [22]

Kenneth Green wrote in the AusIMM Bulletin on the results of the Fraser Institute’s Annual Mining Survey. [21]

“A well-developed mining sector can produce great economic and community benefits,” Green begins. “To encourage a robust development of the mining sector, governments must put forth attractive and competitive policies.” [21]

The Fraser Institute, which has been doing such surveys since 1997, talked to mining company presidents, vice presidents, and managers to capture executive opinion on investment. [21]

Kenneth Green weighed in on Pope Francis’s Encyclical on the Environment in an opinion article for The Province. [15]

According to Green, “while the encyclical might discuss a lot of environmental issues, it doesn’t offer much in the way of factual support.” Making the argument that capitalism has improved environmental protectoin, he continues that “if [Pope Francis] really wants the people of Earth to breathe clean air, drink clean water, protect critical ecosystems, and protect endangered species he could have given them much better advice, including advocating for ever-greater levels of democracy and economic freedom.” [15]

Kenneth Green and Taylor Jackson, both working for The Fraser Institute, wrote an opinion piece for The Vancouver Sun titled “Renewables: All pain, little gain.”

They make the case that renewable energy, including hydroelectric sources, should be avoided because they could lead to higher prices. They cite research by economist Ross McKitrick to support their views. [16]

The Vancouver Sun published responses to the piece in an article titled “Renewable energy has a bright future.” It included a response by Merran Smith, Executive Director of Clean Energy Canada, who concluded that “Kenneth Green and Taylor Jackson must have turned over more than a few rocks in their effort to argue that renewable energy is driving up electricity prices because a growing mountain of evidence points to the contrary.” [17]

Writing for the “full comment” section of the National Post, Kenneth Green suggests that while Canada will likely miss its Copenhagen emissions targets set in 2009, this might not necessarily be a significant problem. According to Green, “this is less about Canada being an environmental laggard, and more a problem with agreeing to politically derived targets you have no idea how to hit.” [18]

He goes on to highlight the “good news” in that GDP increase has increased by 71%, making for a “great trend in emissions intensity.” By “letting markets do what they do best,” as opposed to focussing on emissions standards, Green says that emissions will decline on their own due to technological growth. [18]

Kenneth Green spoke to The Vancouver Sun about how there is a supposed “18-year temperature pause.” [19]

According to Green, the IPCC process is “corrupted,” and that mainstream climate scientists have become “activists.” Green comments that since 1979, global temperatures have “no significant trend” and there has been a “pause” in the temperature record. He continues to state arguments commonly used by skeptics including that “the climate has always changed,” that “the [temperature] models, themselves, are wrong.” [19]

Green says that he is not a “denier” of the science behind climate change, and that “we are probably causing a mild warming,” however not enough to cause concern. [19]

Green’s signature is displayed alongside a full-page ad funded by the CATO institute that appeared in numerous newspapers including the Washington Post, the New York Times and the Chicago Tribune in 2009.  [10]

The advertisement criticizes President Obama’s declaration that “few challenges facing America and the world are more urgent than combating climate change,” saying that “with all due respect Mr. President, that is not true.” It claims “there has been no net global warming for over a decade,” and that the dangers of global warming are “grossly overstated.” [10]

The video claims that “One of the greatest threats to freedom and prosperity in America is climate change legislation.” The video was organized by the Cascade Policy Institute. [7]

Green was a Moderator at a talk hosted by American Enterprise Institute asking the question “Do Fossil Fuels Have a Future?” He was joined by Lee Raymond and James Glassman. [8]

Co-author (with Steven Hayward) of a July 2006 letter sent by AEI to scientists, requesting someone — at a rate of $10,000 for 10,000 words — whose review “thoughtfully explores the limitations of climate model outputs as they pertain to the development of climate policy.”

The author would be part of a “major project to produce a review and policy critique of the forthcoming Fourth Assessment Report (FAR) of the Intergovernmental Panel on Climate Change (IPCC), due for release in the spring of 2007.”

AEI was looking for someone that “thoughtfully explores the limitations of climate model outputs as they pertain to the development of climate policy.”

Writing in his role as Director of Environmental Programs for the Reason Public Policy Institute, Green criticized the IPCC in an October 2000 briefing report.

He describes the IPCC‘s Summary for Policy Makers as a “derivative document” which condenses and expresses IPCC findings “in a language suitable for moderately educated readers.”

According to Green, the SPM consists of “speculative scenarios” not reflective of the full reports, and “has not been peer-reviewed. Its author is anonymous, the document is created independent of the actual report, and the summary is so short that issues were overly simplified.” [9]

Based on a search of major academic journals, Green has not published any peer-reviewed articles on the subject of climate.

A list of some of Green’s publications is available at the Reason Foundation.