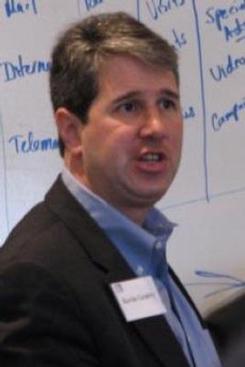 Kevin Gentry is director of strategic development for Koch Industries, vice president of the Charles G. Koch Charitable Foundation, and a top aide to Charles Koch and David Koch. He has also served as vice president for special projects at Koch Companies Public Sector (KCPS). [2], [3]

According to research and documents obtained by Politico, Gentry’s key task is to raise money for the Koch network and he “also leads a sort of informal network of fundraisers for top conservative think tanks and advocacy groups around the country, including The Heritage Foundation, Americans for Prosperity and the Texas Public Policy Foundation.” [4]

One of Gentry’s key roles, working for the Kochs, is organizing the Koch network’s secretive biannual free enterprise donor events. [5]

Gentry has worked with other Koch-affiliated groups. From 1997 to 2003 he served as vice president of the Institute for Humane Studies and the Mercatus Center at George Mason University. [2]

Kevin Gentry was placed on the board of the Cato Institute by Charles Koch and David Koch in December 2010.  At the time, Cato Institute chairman Robert Levy and its president Edward Crane were concerned with the placement, describing Gentry as a “Republican activist” and “social conservative”: [6]

“Nancy Pfotenhauer – they’d put her and Kevin Gentry on our board. Both of them were Republican activists, and social conservatives. Never been to a Cato event, never given a dime to Cato. Nice people, but didn’t have the stature to be on our board,” Crane said in an interview with Slate. [6]

“I just want to say something about these Koch people,” Crane said. “Kevin Gentry sitting over there has never once—never once!—invited me to one of the Koch donor events that he organizes for Charles! Nor has he invited anyone from Cato!” [7]

Crane reportedly ignored Pfotenhauer and Gentry during a board meeting, even though they were the only other directors physically in the room (others participated by phone).  Koch told Levy that Crane’s treatment of Gentry and Pfotenhauer was unacceptable and called for Crane to be fired. [7]

Gentry later wrote an article at CNN backing the Kochs in the dispute over Cato: [8]

“It is Crane and Levy’s concern about their control of Cato, rather than concern for the good of the organization, that is driving the dispute,” Gentry wrote. “Cato is losing its voice and focus, at a time when the debate over the role of the government in our society is more needed than ever.” [8]

Gentry was eventually removed from the Cato board as part of a settlement barring any Koch employees from serving there. [9]

The following is pulled from data at the Federal Election Commission for contributions made by Kevin Gentry from 1996 to 2018: [23]

Gentry does not appear to have made any public statements about his views on climate change.

Below is an email Kevin Gentry sent to attendees of an upcoming GOP donor retreat, obtained by Mother Jones. In the email, Gentry promises a “rigorous post-election assessment” that “must be geared toward productive next steps:” [10], [11]

“In eight weeks, on April 28–29, several hundred of America’s top business owners and CEOs will come together at an exclusive ‘Principals-only’ event hosted by Charles Koch in California. We Look forward to having you join us.

“In Palm Springs, you’ll have the opportunity to join the most strategic market-oriented minds in the business world to advance a plan to defend our free-enterprise system.

“Together, we’ll discuss how to effectively address short-term policy threats in 2013 while building toward free-market gains in 2014 and beyond.

“As a new participant, you will offer a valuable perspective on this group’s rigorous post-election assessment as well as the strategies presented at the meeting.

“We have developed a program that we believe will not only maximize the value of your two days with us, but also your ability to effectively achieve what we believe to be your policy, political and philanthropic goals. Among other topics, in April, we’ll discuss how to more effectively engage growing demographic groups, such as Hispanic and Latino voters, and how to encourage principled and effective advocates of free enterprise to run for office.

“You’ve likely heard many different takes on the 2012 election. And, as you may know from your experience, this type of analysis is not an end in and of itself. As we would within Koch companies, the post-election analysis must be geared toward productive next seps, particularly focusing on where and how we must innovate to achieve our challenging objectives.

“We’ll be joined by a strong line-up of speakers, including several U.S. governors, senators, members of the U.S. House leadership and top political analysts and commentators. We all look forward d to hearing these leaders’ thoughts on the important issues facing our country, and invite your participation through question and answer sessions.

“You’ll also hear strategies that will be central to these efforts going forward scuh as:

” – Reaching the right people with the right message. Understanding key customer segments – and more importantly the issues that matter to them – will be crucial to educating and mobilization key constituencies in future educational and political battles.

” – Hispanic, women and youth engagement. Allies will present an approach to more effectively communicate to these growing demographics, all of which will play a critical role in advancing free enterprise.

” – Candidate recruitment and training. A plan will be shared to help recruit more principled and effective advocates of free-enterprise ot run for office.

“Of course, these only cover a few of the many topics we’ll discuss in April.

“Your efforts will not only effect positive change today, but for years and decades to come. After all, as you’ll see in April, it’s this group’s long-term focus that keeps us fighting for freedom, prosperity and opportunity – even when times are tough.

I look forward to seeing you at April’s meeting. […]”

In an article at HuffPost, The Undercurrent’s journalist Lauren Windsor wrote she and a friend had been “manhandled” by Kevin Gentry at a Koch donor retreat at St. Regis Monarch Bay Resort. [12]

“Kevin Gentry walked over, positioning himself in such a way as to block my ability to approach the private dining room door. He faux-congenially asked my name, and then pretended not to be Kevin Gentry, although I identified him immediately. As I saw Charles Koch exit into the bar area surrounded by a phalanx of security, I walked towards him, and Gentry grabbed my arm, forcibly detaining me,” Lauren Windsor wrote. [12]

Windsor also described the experience of her friend, Tara Margolin: [12]

“They had been shaking hands, when this whole scene went into motion. He crushed her hand and twisted her wrist, also forcibly detaining her. Tara’s hand and wrist were hurt and incredibly sore. Gentry and Davis laughed off her injury.

“We decided to file a police report for her assault after speaking with two lawyers. An officer with the Orange County Sheriffs Department came to take Tara’s complaint, and paramedics came to ice her hand.”

“In a statement for this article Tara said, ‘I was very surprised and disappointed that after the charming and polite conversation I’d had earlier with Mr. Koch in the resort gym that he would have his representative treat me in such a thuggish and frightening manner.’” [12]

The Action Network, sponsored by American Family Voices, launched a petition, with over 7,000 signatures, for Kevin Gentry to be fired in response to the incident. [13]

In a 2014 email sent by Kevin Gentry and obtained by The Daily Beast, Gentry invited members of Freedom Partners to join a conference where they would announce a new energy initiative. In the email, Gentry called the Palm Springs event “highly successful recruitment reception.” [14]

In April 1 correspondence, Gentry invited members to join an upcoming conference call about a “significant new Freedom Partners initiative” which he claimed would “drive the national narrative around energy and the tremendous benefits of reliable affordable energy for all Americans, especially for the less fortunate.”  [14]

Gentry claimed a “new multi million dollar campaign by environmentalists is arguably an effort to distract from the failures of Obamacare. But you and I know energy is a critically important issue for the United States.”  [14]

Gentry received the 2007 “Roe Award” from the State Policy Network. The award “was established to recognize individuals who exhibit leadership, innovation and achievement in promoting free markets and less intrusive government at the state and local level.” [15]

Gentry accepted the award on behalf of the Koch Foundation “noting the Koch family’s long-term dedication to building the institutions that most effectively advance the free society.” The article at SPN notes some of the roles that Gentry has played for SPN: [15]

“Gentry has contributed much to the bottom lines of state-focused think tanks. For nearly four years he has organized the Koch Foundation’s Development Exchange, a monthly Washington, D.C.-based luncheon featuring experts in fundraising and marketing. SPN members attend the Exchanges in-person or by telephone.

“He has also led numerous – always well-attended – fundraising workshops at SPN Annual Meetings. [SPN board member Gisèle] Huff highlighted, ‘A mark of how well Kevin listens, one of the pillars of successful fundraising, is that prior to the Annual Meeting he sent out a letter to all attendees requesting their input as to what topics were of most interest to them.’” [15]

According to the World Taxpayers Associations: “Kevin Gentry writes a weekly summary of advice on fundraising and building relationships with your donors.” [21]