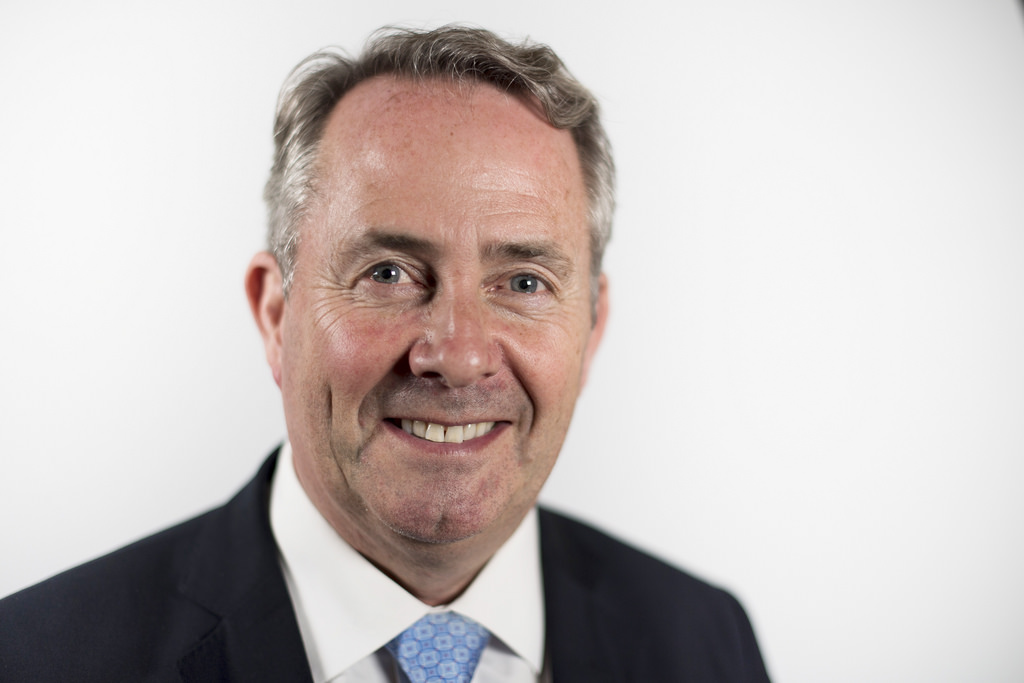 Liam Fox is a former Secretary of State for International Trade and Conservative MP for North Somerset. [2]

A Brexit supporter coming from the right wing of the Conservative Party, Fox was appointed to the cabinet role in July 2016 after the UK’s vote to leave the EU, returning to government after a six-year gap. Fox was not given a position in Boris Johnson‘s government. [3], [2]

Fox helped launch the Grassroots Out campaign at the start of 2016 and has been a member of the hard-line anti-EU European Research Group chaired by Jacob Rees-Mogg within the Conservative Party. [4], [5]

Between 1997 and 2011, Fox founded and chaired the controversial Atlantic Bridge thinktank. The group had close ties to the Koch brothers-backed American Tea Party movement before it was forced to dissolve in October 2011 following criticisms from a 2007 Charity Commission investigation. That investigation found the group appeared to primarily exist to promote policy positions that mirrored those of the Conservative Party. [6], [7], [8]

Atlantic Bridge had also signed a partnership with the D.C.-based lobby group, the American Legislative Exchange Council (ALEC), funded by fossil fuel and tobacco companies and known for pushing bills across the United States which undermine environmental laws. [9], [10]

Since the EU referendum, Fox has sought to secure trade deals with other countries as the UK begins the process of leaving the European Union. A US–UK trade deal is top of the agenda, which has seen Fox hold meetings with Washington D.C.-based think tank the Heritage Foundation, known for supporting climate science denial and being highly influential in shaping the new Trump administration. Fox has a long-held relationship with the foundation from his work at the Atlantic Bridge, and Fox’s former special adviser at the Ministry of Defence, Luke Coffey, now works at the Heritage Foundation. [11], [10], [12]

Fox was forced to resign in 2011 from his position as Defence Secretary after revelations that he had allowed his friend and lobbyist Adam Werritty attend meetings at the Ministry of Defence without the necessary security clearance. As an unofficial, undeclared adviser, Werritty also joined Fox for meetings with foreign dignitaries. [13]

Fox was criticised for appearing to suggest climate science could be rejected in comments made to the House of Commons. He later clarified them, tweeting:

“I have always taken environmental issues extremely seriously. The state of our planet should concern us all. There is a clear scientific consensus on climate change, which I fully respect. Even those who don’t accept it should want to see our finite resources carefully managed.” [27]

As reported by Energy Live News, Fox made the following statement while speaking at the oil and gas leaders at the International Petroleum Week: [14]

“In climate change as in all things, we must never let the perfect be the enemy of the good. We must focus on a low carbon future but the simple fact is that for the moment, we do require fossil fuels to deliver secure and affordable energy.

“That need for oil and gas is especially pressing for countries in the third world, who need affordable energy to grow their economies to a level we take for granted.

He said the government “will not use Brexit as a means or an excuse” to lower environmental standards” and called climate change  “undoubtedly one of the most pressing challenges” beyond Brexit. He added: [14]

“The UK is legally committed to reducing greenhouse gas emissions by 80% between 1990 and 2050. This is a commitment that is part of our domestic law through the Climate Change Act, not EU law.

“The United Kingdom’s comparative advantage is in quality, not price and that includes high environmental standards.” [14]

Fox’s voting record suggests climate change is not a priority issue for him, having mostly voted against measures to limit greenhouse gas emissions over the years. [15]

Two of Fox’s five-member expert committee, formed in October 2017, are prominent figures in the UK climate science denial movement. Lord Peter Lilley was one of five MPs to vote against the UK’s 2008 Climate Change Act, and both he and Dr Ruth Lea sit on the Board of Trustees of the climate sceptic Global Warming Policy Foundation (GWPF). [16]

Michael Hintze, a key funder of the GWPF, was also the main sponsor of Fox’s Atlantic Bridge. [17]

In an undated statement expressing his views on fracking—nearly identical to statements by some other MPs—Fox wrote: [18], [19]

“I fully understand and appreciate people’s concerns about fracking, but let me reassure you that the Government is creating a regulatory regime that provides clear, strong protections for the environment. With these in place, I think it is right that we explore and make use of shale gas and oil. The opportunity to extract this energy, as well as to secure jobs and investment, cannot be ignored.”

“Of course, none of this diminishes in any way our need to reduce the consumption of fossil fuels. Apart from the well documented changes in global climate, we should be better shepherds of the finite global sources we possess. We are not the owners of our planet, merely its temporary guardians.” [18]

Fox gave a speech outlining his “vision” for a new US–UK free trade deal at the free-market thinktank founded by Margaret Thatcher, the Centre for Policy Studies. In the speech, he promised that the NHS would never be for sale to the private sector and said World Trade Organisation rules needed to be overhauled to “prevent countries engaging in unfair trade practices such as illegal subsidies or dumping” as well as to “strengthen the dispute settlement system”. [28]

Shortly after “Extinction Rebellion” protesters glued themselves to the entrance of the London Stock Exchange, Fox highlighted in the House of Commons the economic opportunities presented by clean technology, while appearing to legitimise climate science deniers: [26]

“It’s important that we take climate issues seriously. Whether or not individuals accept the current scientific consensus on the causes of climate change, it is sensible for everyone to use finite resources in a responsible way.

“We in the United Kingdom were the first country to establish legally binding emission targets through the climate change act 2008, we have reduced emissions faster than any other G7 country and we are leaders in clean energy production.

“There is an estimated 11.5 trillion dollars that is likely to be invested in clean energy between now and 2050 globally, that represents an enormous opportunity for the United Kingdom, which is already as I’ve said a global leader, both by practice and by export, and could mean a lot of potential jobs for the United Kingdom.” [26]

In a speech Fox delivered at an International Petroleum Week conference in London, he assured the oil and gas industry it could rely on the UK government’s continued support: [20]

“In Climate Change as in all things, we must never let the perfect be the enemy of the good.

“We must focus on a low-carbon future but the simple fact is that for the moment we do require fossil fuels to deliver secure and affordable energy.” [20]

In an article Fox wrote for The Telegraph on the need for new free trade deals, entitled “US talks are just the start of exciting new free-trade era,” he said: [21]

“This process marks the beginning of an exciting new chapter for the UK where, for the first time in over 40 years we will be able to take advantage of the growing markets in the world and determine a trade relationship designed around Britain’s national interest.” [21]

Fox wrote an article in The Times criticising the government’s decision not to appeal a court verdict prohibiting the expansion of Heathrow Airport. He stated: “Constraining the growth of Heathrow, the very vessel that will ensure the UK remains an outward-looking trading nation, would be a dereliction of duty by the government. It would hand the advantage to the EU.” [31]

Fox received a total of £20,000 from two donations on September 20, 2019 and December 13, 2019 from Aquind Ltd, which is building an electricity interconnector between the UK and mainland Europe. The company’s director Alexander Temerko previously directed Offshore Group Newcastle, a company which builds oil and gas rigs. [30]

Fox met with two neoconservative think tanks during his first trip to the United States after the 2017 general election. According to documents obtained by DeSmog via the Freedom of Information Act, Fox held a breakfast meeting with think tanks and business associations in Washington D.C. during his trip on 19-20 June. In attendance were the American Enterprise Institute (AEI) and the Heritage Foundation – both influential think tanks backed by corporations and conservative foundations. [23]

Civil service documents from Fox’s Department for International Trade, photographed by a train passenger, revealed plans to scale down concern over climate change and the illegal wildlife trade to facilitate post-Brexit trade deals, The Times reported. [24]

During his first post-Brexit trip to the United States, less than two weeks after being appointed International Trade Secretary, Liam Fox met with the climate science denying neoconservative think tank, the Heritage Foundation. [11]

An attendees list shows that Fox addressed sixteen Heritage Foundation staff, including the think tank’s president Jim DeMint, and executive vice president, Bret Bernhardt, over lunch “to explain the formation of the Department and UK priorities on trade and our EU renegotiation,” according to the meeting notes. [11]

Liam Fox voted against setting a decarbonisation target for the UK within six months of June 2016 and to review it annually thereafter. [15]

In the same month he also voted against requiring a strategy for carbon capture and storage for the energy industry. [15]

Fox gave a speech at the private University of Buckingham and was paid £1,000, according to parliament’s Register of Interests. [29]

Fox voted against requiring the setting of a target range for the amount of carbon dioxide (or other greenhouse gases) produced per unit of electricity generated. [15]

Fox voted against requiring the UK Green Investment Bank to explicitly act in support of the target of reducing UK carbon emissions to 20 percent of 1990 levels by 2050. [15]

The sister organisation set up at this time in the US was called the Atlantic Bridge Project and its director of international affairs was Catherine Bray, who had worked for Conservative MEP Richard Ashworth and UKIP MEP Roger Helmer. Bray has since worked for Eurosceptic Conservative MEP Daniel Hannan. [10]

Liam Fox launched the Atlantic Bridge. Fox said the group’s mission was “to bring people together who have common interests.” The group would defend these interests, he said, from “European integrationists who would like to pull Britain away from its relationship with the United States.” [25]