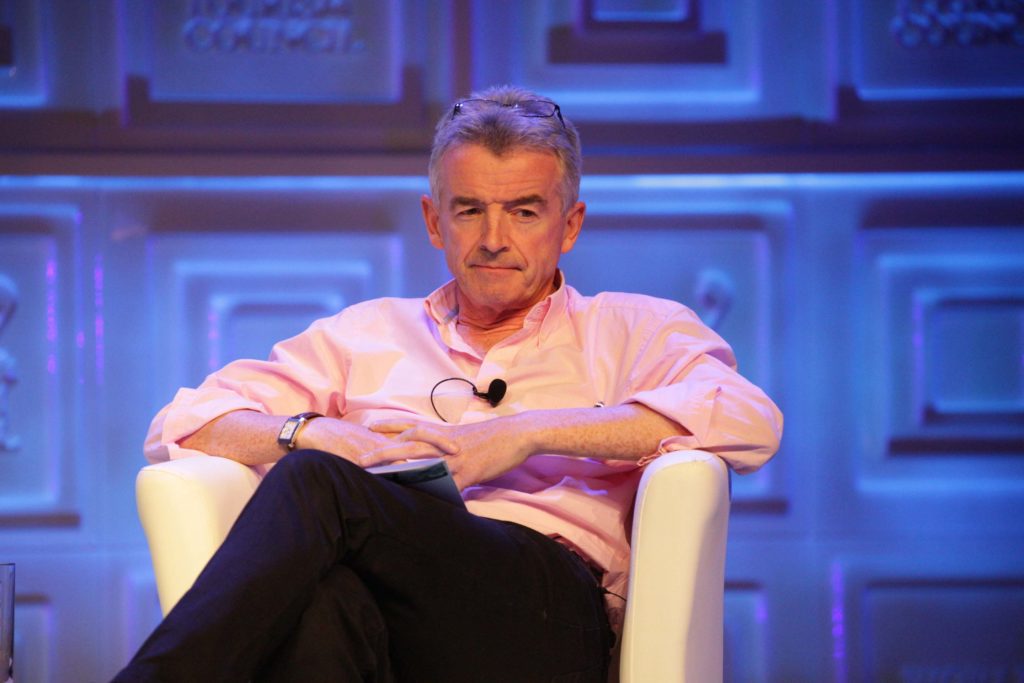 Michael O’Leary is the CEO of Irish budget airline Ryanair. [3]

Although Ryanair claims it is “Europe’s greenest and cleanest airline”, in 2019 the company was ranked as the 10thlargest emitter in Europe behind nine coal plants. Since then, Ryanair has advertised itself as Europe’s “lowest emissions airline”, prompting regulators to ban its campaign due to it being “misleading”. [4], [5]

Michael O’Leary has also been very critical of carbon taxing, both in aviation and farming, describing the idea of taxing something to reduce its use as “nonsense”. [6]

Throughout his career, O’Leary has rejected the science of climate change, calling greenhouse gas emissions regulations “absolute bloody nonsense” and claiming there is “no evidence to suggest the globe is warming”. [7], [8]

However, in Ryanair’s 2018 environmental policy document, O’Leary wrote that “aviation must play its role in addressing climate change” and stated the airline supports the Paris Agreement to limit global temperature rise. [9]

In 2019, O’Leary criticised the “flight shame movement” when he spoke at a press conference in Brussels as the chairman of lobby group Airlines for Europe (A4E). [10]

As well as his views on climate change, O’Leary has made a number of other controversial statements. He has described the owners of Stansted Airport as “overcharging rapists” and claimed that “the best thing you can do with environmentalists is shoot them.” [11], [12], [13]

In February 2020 O’Leary received widespread criticism for stating terrorists will “generally be males of a Muslim persuasion”, while families with children should be waived through airport security because there’s “zero” chance they are “bombers”. [14], [15]

In relation to the 2020 coronavirus pandemic, O’Leary criticised the “lunacy” seen on social media, and the “hysteria” in the news coverage after Ryanair saw a dramatic decline in passengers and a steep drop in its share price. [16]

O’Leary is a keen farmer and rears various breeds of cattle. [17]

“Aviation is the most efficient form of mass point-to- point transport, accounting for just 2% of EU man-made CO2 emissions.” [9]

However, the European Commission says aviation accounts for 3% of the EU’s total greenhouse gas emissions, and according to the UK’s Department for Business, Energy and Industrial Strategy, air travel produces more emissions per km than any other mode of transport, except single-occupancy driving. [18], [19]

He also said that cooling and warming had been “going on for years” and, regarding fears about global warming, said: [20]

“The problem I have with the whole environmental debate, is that it’s shifted away from being global warming because they couldn’t stand up global warming, and it’s now ‘climate change’, I mean climate changes every day, it’s called weather.” [7]

O’Leary claimed there was “no evidence to suggest the globe is warming” on RTE’s Late Late show and said: [8]

“From [the year] 50 to 75 they reduced, from 75 to 2000 they rose, and they’ve done nothing for the last 11 years which is why they never talk about global warming anymore, they now talk about climate change.” [8]

In an interview for the Independent, O’Leary said: [21]

“The climate’s been changing since time immemorial. Do I believe there is global warming? No, I believe it’s all a load of bullshit. But it’s amazing the way the whole fucking eco-warriors and the media have changed. It used to be global warming, but now, when global temperatures haven’t risen in the past 12 years, they say ‘climate change’.” [21]

“There’s absolutely no link between man-made carbon, which contributes less than 2 per cent of total carbon emissions [and climate change].” [21]

Speaking to CNBC, Leary acknowledged the need to combat climate change, stating that while he had previously been an “original sceptic,” environmental issues had “moved front and centre.” He added: “It is something that our customers and the people working here at Ryanair want us to focus on and we tend to be very responsive.” [23]

Ryanair’s advertising campaign claiming that it was Europe’s “lowest emissions airline” was banned by the Advertising Standards Authority, which deemed the adverts “misleading”. [5]

The regulator claimed that evidence used to back up Ryanair’s claims were of “little value” due to some of its data coming from 2011. [5]

Speaking as chairman of lobby group Airlines for Europe (A4E) at a press conference in Brussels, O’Leary criticised the “flight shame movement” which he said was “Swedish-born,” and argued that the aviation industry was performing “remarkably well” and working towards a “greener, cleaner planet”. [10]

When asked whether carbon taxes would impact farming and aviation, O’Leary said: [6]

“Both will be unsuccessful in what it is they’re trying to achieve. This idea that by taxing something we’re just going to reduce its use is nonsense.” [6]

Ryanair was named the 10th largest carbon emitter in Europe, joining nine coal plants on the list – the first time an industry other than coal made the rankings. Ryanair was responsible for 9.9 megatonnes of greenhouse gas emissions the previous year. [4]

Andrew Murphy, aviation manager at the European Federation for Transport and Environment, called the airline “the new coal”. [4]

A Ryanair spokesperson subsequently described the company as “Europe’s greenest and cleanest airline” with the “lowest CO2 emissions per km travelled than any other airline”. [4]

In an interview for the Irish Farmers Journal, O’Leary described vegetarianism as “a fad” and when asked if veganism or vegetarianism would threaten traditional farming, he said that “there is no way that the world is going to live or turn to either a vegan diet or to a vegetarian diet”. [17]

O’Leary does not appear to be active on social media.