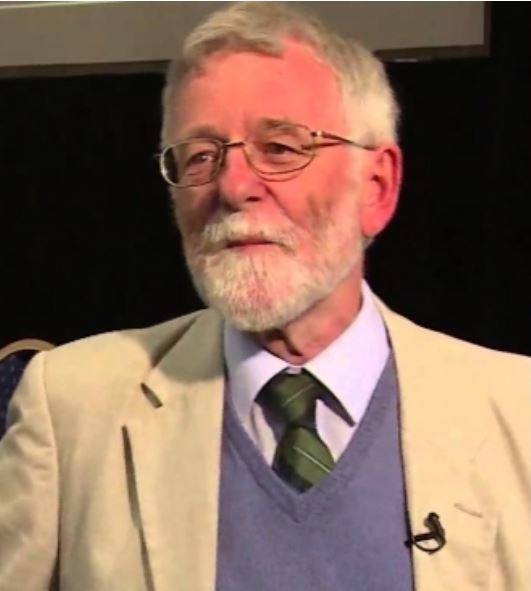 Philip Foster is a retired Church of England vicar, writer and long-time supporter of the Eurosceptic UK Independence Party (UKIP). [2], [3]

After completing his degree, Philip Foster taught secondary school and sixth-form students in Nigeria. He trained as a Christian minister and served for 30 years before retiring. [4]

Foster is vice chairman of the cross-party Eurosceptic group Campaign for an Independent Britain. [5]

He is also one of the founding members of Principia Scientific International (PSI), a fringe UK-based organisation. The group, founded in 2010, has claimed that carbon dioxide is not a greenhouse gas and “could actually cool the planet,” as well as calling childhood vaccines “one of the largest most evil lies in history.” Piers Corbyn is a “Consultant/Friend” of PSI. [6], [7], [8]

Foster sits on the steering committee of the Independent Committee on Geoethics, an international group launched in 2015 as a “Climatic Reformation” to counter the “religion” of “CO2-driven Global Warming,” according to Nils-Axel Mörner, a Swedish climate science denier also on the steering committee. Other committee members include Christopher Monckton, Patrick Moore and Roger Tattersall. The group co-sponsored the “Paris Climate Challenge” event hosted by the Heartland Institute in December 2015, designed as a “counter-conference” to the U.N. Climate Change Conference in Paris (COP21). UKIP MEPs Stuart Agnew and Roger Helmer spoke at the event. [9], [10], [11]

Foster is the author of While the Earth Endures: Creation Cosmology and Climate Change, in which he argues that there is no scientific evidence for “anthropogenic climate change.” He is also the owner of St. Matthew Publishing, a group that has published a number of creationism and climate change denial books in the UK. The publishing group’s website is no longer online, and it is unclear if the business is still in operation. [12], [13]

Foster has claimed that former British Prime Minister Margaret Thatcher began a conspiracy to promote global warming in order to support her confrontation with the National Union of Mineworkers during the strike of 1984 and set the move to nuclear power in motion. [14]

In 2010, Foster led a campaign to repeal the UK’s 2008 Climate Change Act called “Climate Sense.” The campaign launched with a “Climate Fools Day” event in Parliament, attended by fellow climate science deniers Sammy Wilson, Piers Corbyn, Graham Stringer, David Davies, John Redwood, Christopher Booker. He said at the time that the legislation would cost UK taxpayers £480bn over the next 40 years because of the cost of new technologies. [15], [16]

In 2013, Foster co-organised a presentation by Australian climate sceptic professor Dr Murry Salby in the House of Commons entitled “Climate Change: What we know and what we don’t.” The event was hosted by Labour MP Graham Stringer. [17]

Foster is a patron of the “Christian Soldiers” grouping within UKIP. The group produced a controversial leaflet for the party’s 2015 conference which claimed that a campaign to challenge homophobia in schools was a recruitment drive for “fresh blood” and amounted to “sexual grooming.” For the 2017 party conference, their leaflet accused Christians who voted to remain in the EU of committing “spiritual treason against almighty God and his kingdom.” [18], [19]

“Christian Soldiers” claim to be “Fighting through Christ for deliverance from EU tyranny.” Foster explained their reasoning to Vice UK: [20]

“What lies behind capitalism and Adam Smith are basic Christian principles of personal liberty, the right to property and respect for honesty in dealings… The European Union is not a free market. It’s a customs union, which is quite a different thing. It’s a level playing field that’s held like that by regulation. They destroy free trade. Adam Smith would be tearing his hair out.” [20]

At the 2016 UKIP party conference, Foster gave a talk entitled “Why rising Carbon Dioxide is GOOD for us and the planet and why it has NO influence on climate change,” according to a tweet by campaign group Scientists for EU. [21]

In 2013, Foster told local newspaper The Hunts Post that he started to form his opinions on climate change after reading The Sceptical Environmentalist by Bjorn Lomborg, which downplays the threat of global warming. [22]

In a foreword to a summary of a lecture given by disgraced Australian climate sceptic Dr Murry Salby entitled “Climate Change: What we know and what we don’t,” Foster wrote: [17]

“How could EU regulation, which was now failing to prevent goods from outside the EU from flooding in, be in some way extended and strengthened? It is this answer to this problem that is the key to understanding why the EU has embraced the idea of Catastrophic Anthropogenic Climate Change (CACC). [17]

“Through the ‘moral’ imperative of ‘saving the planet’ from the dire consequences of burning of fossil fuels, the EU hoped it could hobble the burgeoning industries of Brazil, Russia, India, China (BRICs). Making the world’s energy extremely expensive by requiring the use of renewables and by insisting on heavy carbon taxes, you are a long way towards crushing the competition of the BRICs. [17]

“Faced as we are with just about every supranational body, the EU and the UN with its IPCC [Intergovernmental Panel on Climate Change], a host of Green NGOs, such as WWF, Friends of the Earth and Greenpeace and other hugely wealthy lobby groups, along with a supposed global consensus of scientific opinion that the burning of fossil fuels is catastrophically changing the climate, we might indeed feel intimidated and fearful to challenge this awesome multi-headed giant. [17]

“Here Prof Murry Salby comes to our rescue. With one deadly piece of precision science he has slain the giant phantom of CACC [Catastrophic Anthropogenic Climate Change].” [17]

Foster told local newspaper The Hunts Post: “Our climate is quite beyond human influence. The main influences are the sun’s variability and activity, the lunar orbit, planetary orbits and our varying position in the solar system and in the galaxy. On the earth, the clouds and ocean currents control the overall temperature (not the other way round) and they respond primarily to these extra-terrestrial influences.” [22]

In a YouTube video called “Global warming con is a tool of control,” Foster said: “I am, in one sense, no important person but, equally, I have taken time to study quite carefully the whole issue of global warming, climate change, and its connection to so-called sustainable development.” [23]

Writing for The Conservative Woman, Foster referred to climate change as a “hobgoblin”. Foster characterised the environmentalist movement as a religious cult, stating: “It is no coincidence that ‘global warming’ became the new crisis in 1989, just as the Berlin Wall fell and the ‘Red Menace’ virtually disappeared overnight. We exchanged one hobgoblin for another. The result was a new religion, or a tweak of an older religion stemming from the so-called Enlightenment and the Romantics – a bunch of mostly drug-soaked poets and artists who in effect worshipped ‘Nature.’”[35]

Foster appeared on BBC Radio Cambridgeshire to debate whether the heatwave which gripped the UK over the previous few weeks meant climate change was real. [25]

Foster’s appearance on the Chris Mann show sparked outrage after University of East Anglia academic and former Green party candidate for Cambridge Rupert Read tweeted that he had been asked to go on the show but refused the invitation after finding out about the programme’s format. [26]

Foster teamed up with climate science denier and former adviser to Margaret Thatcher Christopher Monckton to organise anti-climate actions on the sidelines of the landmark UN climate talks in Paris. [14]

The local paper The Hunts Post reported that Foster, who lives in Huntingdonshire, wrote and published a “climate carol” in which he argues that climate change occurs naturally and is part of a pattern. [22]

In the carol, an environment reporter called Scrooge is visited by a charitable trust called Fuel for Africa which tells him Africa’s oil and coal should be used for electricity generation. [22]

Scrooge accuses Fuel for Africa of being “climate deniers” and “humbug” before being visited by the spirits of climate change past, present and future which all push messages of climate science denial. [22]

Foster co-organised a presentation by an Australian climate sceptic professor in the House of Commons entitled “Climate Change: What we know and what we don’t.” The event was hosted by Labour MP Graham Stringer. [17]

A summary of the lecture was written by Mike Haseler, Chairman of the Scottish Climate and Energy Forum, a climate sceptic membership group supportive of anti-wind energy campaign groups and the climate sceptic blog, Bishop Hill, run by Andrew Montford. The report was edited by Foster and published by the Bruges Group, a Eurosceptic thinktank with a history of promoting disinformation about climate change. [17], [27], [28]

Dr Murry Salby, who gave the lecture, had recently been sacked by his university for “alleged policy breaches.” He was previously banned from accessing public science research funding in the US after an investigation concluded he was guilty of “deceptive conduct” and had likely fabricated time sheets in relation to research paid for through NSF money. [29]

Foster submitted written evidence to Parliament’s Science and Technology Committee, in which he stated: [30]

“The ‘science,’ as you people are so keen on assuring us, is ‘settled.’ Indeed it is settled—in favour of the null hypothesis. There is no dangerous ‘climate change’ caused by human activity, increasing C02 does not present a threat, rather a benefit—more crops and therefore more food to feed a growing population. [30]

Foster was featured in a video entitled “Global Warming Con is a Tool of Control – Rev Philip Foster,” uploaded by the channel “Videos From The Underground” which posts numerous conspiracy theory videos about the “Illuminati’s Occult Philosophy,” “9/11 Truth,” and UFO sightings. [23], [31]

In a blog post addressed to the BBC’s environment and energy analyst Roger Harrabin, Foster criticised Harrabin’s use of climate models as evidence during a BBC programme about climate change. [32]

He criticised Harrabin for saying that global warming is “a science based risk” and added: “Sorry but this is not true. It is a model based risk.” [32]

Foster, as owner of St. Matthew Publishing Ltd, is responsible for the British publishing of the book Slaying the Sky Dragon – Death of the Greenhouse Gas Theory. According to Climate Change Dispatch, a website that claims the debate is not over on man-made climate change: [6], [33]

[…] “If true, the disclosure may possibly derail last-ditch attempts at a binding international treaty to ‘halt man-made global warming.’ At minimum the story will be sure to trigger a fresh scandal for the beleaguered United Nations body,” John O’Sullivan—one of the book’s authors and also a fellow member at Principia Scientific International—wrote at the blog. [33]