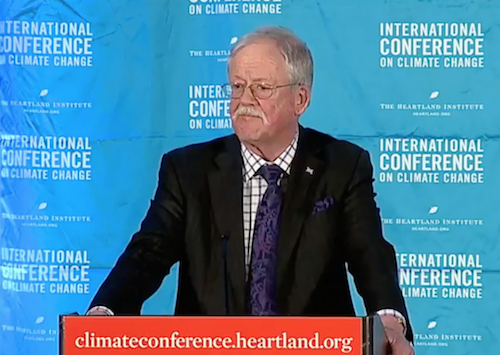 Roger Helmer is a former member of European Parliament for the East Midlands of Great Britain, representing the UK Independence Party (UKIP), a group pushing the withdrawal of the UK from the European Union. Helmer resigned in June, 2017 during an investigation into alleged misuse of public funds. [2], [20]

He was elected for his second term in June 2004 and sits on several committees including Unemployment, Petitions, Constitutional Affairs, and the Parliament’s Temporary Committee on Climate Change. [1]

According to his profile at UKIP, “Roger has developed close relationships with conservative political groups in the USA, and has been a regular speaker at American conferences.” He was recently appointed “Adam Smith Scholar” by the American Legislative Exchange Council (ALEC).

During the coronavirus pandemic, Helmer claimed that COVID-19 was a “Remainer plot” designed to “kill off most of the old people who voted Leave”. [26]

“In the last hundred years, average global temperature has risen a mere 0.7 degrees Celsius. There is ample evidence that results from ground-based weather stations have been contaminated by urban sprawl, tarmac, car parks, vehicles, buildings and air-conditioning units.

“Temperature data from satellites over the last 30 years show some warming, but less than that from ground stations. […] This slight 0.7 degree rise is entirely consistent with well-established, long-term, natural climate cycles.” [4]

Shortly after Donald Trump announced withdrawal from the Paris Climate Agreement, Roger Helmer went to Twitter to describe it as “American leadership in action”: [22]

“The truth is that climate alarmism has become the most expensive, and the most wasteful, project in the history of the world. It is junk economics built on junk science. It amounts to no more than hot air, yet it looks set to beggar our grandchildren.” [5]

”[…] I believe, AGW is simply a kind of collective hysteria with no basis in science.” [6]

“By geo-historical standards, today’s atmospheric CO2 levels are remarkably – indeed dangerously – low.  We need CO2 in the air to support plant growth and agricultural yields, and more would be better.” [7]

On wind farms: “We oppose them both locally and nationally.” [8]

Helmer appeared in Marc Morano’s 2020 film Climate Hustle 2: Rise of the Climate Monarchy, produced by the Committee for a Constructive Tomorrow (CFACT). During a discussion concerned with how environmentalism functioned as a tool for the political indoctrination of children, Helmer stated: [27]

“I do go to a class of 16-, 17-year-olds in school and start talking to them about climate. And they are amazed to hear that there is an alternative point of view. They simply didn’t know that anybody challenges these propositions.”

“we’ve created a vast industry in renewable energy and other activities around the whole climate change issue, which is wasting money and misallocating resources on a gargantuan scale.”

Roger Helmer resigned in June, 2017 during an investigation into alleged misuse of public funds, reported The Guardian. [20]

While no explanation was provided for his decision to withdraw part way through the European parliamentary term, The Guardian notes that Helmer being demanded to repay close to £100,000 for employing a Ukip party worker, Paul Oakden, as his assistant. MEPs are banned from hiring full-time assistants who also hold positions in national political parties. [20]

When contacted by the Guardian, Helmer said: “The only comment I have is how do you know about it and I don’t.”  [20]

Helmer denied the claims that he had misused public money, saying that “None of that is correct.” BBC asked Helmer about the timing of his resignation, to which he responded: [21]

“I think at the age of 73 I’m perfectly entitled to retire… I’d been thinking about it, I first mooted the idea in 2011.
“This week was the right time to make the announcement… I signed the papers on May 31st.” [21]

Helmer was a speaker at the Heartland Institute‘s 12th International Conference on Climate Change (ICCC12). [19]

Roger Helmer was a signatory to a complaint to the BBC (PDF), accusing it of bias on climate change coverage for not including the positions of climate change skeptics. [17]

“We and many others alongside us have come to the opinion that the BBC‘s continuing bias on the climate question – its performance is too often like a scientifically illiterate, naïve, oft times emotive green activist organisation – is unacceptable and must now be brought to an end. In future, both sides in the climate debate must be fairly heard, whether BBC staff like it or not,” the letter reads. [17]

Among the letter’s recommendations is to “arrange for Lord Monckton to co-ordinate a team of leading sceptical scientists and economists to give a day-long, high-level briefing for senior BBC executives.” [17]

It suggests that “The Trust should require that the section on ‘Consensus’ in the impartiality topic under the BBC‘s Guidelines should be rewritten or deleted,” and that “The BBC should employ at least one climate sceptic in a senior journalistic role,” among numerous other recommendations. [17]

The complaint was posted on Paul Homewood’s blog, NotALotOfPeopleKnowThat. [18]

Helmer was listed as a speaker at the “Paris Climate Challenge” (PCC) an event organized by the newly created Independent Committee on Geoethics (ICG) with the goal of “Challenging the groupthink of COP21.” [23]

Helmer was a speaker at the Heartland Institute‘s Seventh International Conference on Climate Change (ICCC7). [24] His speech can be viewed below.

He spoke at a workshop originally titled “Warming Up to Climate Change: The Many Benefits of Increased Atmospheric CO2.” The title was later changed to “Benefit Analysis of CO2.” [10], [11]

The posters were set up in prominent locations of Derby, Leicenster, Northampton, Lincoln, and Nottingham in the UK. [12]

Helmer hosted his own climate change conference titled “Have Humans Changed the Climate?” [13]

Helmer spoke at the Heartland Institute‘s Second International Conference on Climate Change (ICCC2) where he gave a speech titled “The Kyoto Zone.” [25]

He was asked to review EU climate policy, and he argued that “If climate alarmism is misplaced, then the EU’s policy is entirely pointless and a vast waste of resources.” [15]

DeSmogBlog researched the funding behind Heartland’s Second International Conference on Climate Change, and found that sponsor organizations had received over $47 million in funding from energy companies and right-wing foundations, with 78% of that total coming from Scaife Family foundations.

Helmer has been a member of the European parliament’s Temporary Committee on Climate Change where he calls himself close to a “a lone voice crying in the wilderness” when it comes to his skepticism of man-made climate change.

When German MEP Karl-Heinz Florenz produced a draft report of recommendations for the EU‘s future integrated policy on climate change (PDF), Helmer prepared to debate the report when it was brought in front of the committee.

Below is a summary of Helmer’s “amendments” that he put forward when debating the report (Added are links to common climate change myths commonly used by climate change skeptics and debunked by SkepticalScience): [16]

“the world has experienced no global warming for a decade, with average global temperatures static or declining since 1998” (Climate Myth #8)

“the pattern of global warming … predicted by computer models … is wholly at variance with actual climate changes as revealed by ground stations, meteorological balloons and especially satellite measurements” (Climate Myth #7)

“… future increases in atmospheric CO2 concentrations from current levels will have only a marginal effect on climate”, (Climate Myth #30)

“… more than 32,000 scientists have signed the Oregon Declaration challenging the anthropogenic global warming hypothesis, in addition to the similar Manhattan Declaration of March 2008…” (Climate Myth # 119)

“… measures to reduce CO2 emissions, such as the Kyoto protocol, even if fully implemented, would have a trivial effect on climate” (Climate Myth #97)

“… even if the EU adopts aggressive emissions policies, it is extremely unlikely that other major emitters such as China and India will do so…”

“… studies by reputable economists, notably by Bjorn Lomborg and his Copenhagen Consensus, show that money proposed to be used for CO2 emissions reduction would achieve much greater good for humanity if spent on other programmes…”

“… commentators argue that adaptation to changes in climate are a much more measured and practical response to climate change than attempts to prevent it.”

Helmer was named by Friends of the Earth as one of the worst voting MEPs on environmental issues, voting only one out of ten possible “eco-friendly” votes. [2]

Roger Helmer has published two books on European issues, “Straight Talking on Europe” in 2000, and “A Declaration of Independence” in 2002.

He published his book Sceptic at Large in June, 2011.