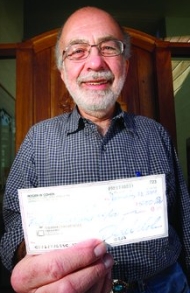 Roger W. Cohen was a former Manager of Strategic Planning and Programs at ExxonMobil Corporation, where he retired in 2003. Cohen passed away in September 2016. [1], [13]

He was a former George C. Marshall Institute “Expert” (GMI is now defunct and replaced by the CO2 Coalition). He led a push for the American Physical Society (APS) to weaken their position on climate change. Cohen co-published Marshall Institute reports with fellow skeptic William Happer (who he also collaborated with in the 2009 petition to the APS). [11], [5], [6]

Cohen became involved in studying global warming when Exxon realized that its “business environment” could be affected. [2]

Writing in a paper for the Science and Public Policy Institute (SPPI), Cohen declared:

“At this point there is little doubt that the IPCC position is seriously flawed in its central position that humanity is responsible for most of the observed warming of the last third of the 20th century, and in its projections for effects in the 21st century.” [2]

In a 1982 Exxon research memo, Cohen acknowledged a “clear scientific consensus has emerged regarding the expected effects of increased atmospheric CO2,” however expressed doubts about climate models: [17]

“Although the increase of atmospheric CO2 is well documented, it has not yet resulted in a measureable change in the earth’s climate,” Cohen began. “the concerns surrounding the possible effects of increased CO2 have been based on the predictions of models which simulate the earth’s climate.

“These models vary widely in the level of detail in which climate processes are treated and in the approximations used to describe the complexities of these processes. Consequently the quantitative predictions derived from the various models show considerable variation. However, over the past several years a clear scientific consensus has emerged regarding the expected climatic effects of increased atmospheric CO2. The consensus is that a doubling of atmospheric CO2 from its pre-industrial revolution value would result in average global temperature rise of (3.0 ± 1.5)°C. […] There is unanimous agreement in the scientific community that a temperature increase of this magnitude would bring about significant changes in the earth’s climate including rainfall distribution and alterations in the biosphere. The time required for doubling of atmospheric CO2 depends on future world consumption of fossil fuels. Current projections indicate that doubling will occur sometime in the latter half of the 21st century. The models predict that CO2-induced climate changes should be observable well before doubling. It is generally believed that the first unambiguous CO2-induced temperature increase will not be observable until around the year 2000.

“It should be emphasized that the consensus prediction of global warming is not unanimous. Several scientists have taken positions that openly question the validity of the predictions of the models, and a few have proposed mechanisms which could mitigate a CO2 warming. One of the most serious of these proposals has been made by Professor Reginald Newell of MIT.

“In summary, the results of our research are in accord with the scientific consensus on the effect of increased atmospheric CO2 on climate. Our research appears to reconcile NewelI’s observations and proposed mechanism with the consensus opinion.”

After losing a bet on climate change, Cohen still claimed that more CO2 was beneficial, The Durango Herald reported: [21]

“Regardless of what’s happening to the temperature, the fact that there’s more carbon dioxide in the atmosphere has provided a major increase in plant life on the surface of the planet,” Cohen said. “Which benefits us all.” [21]

In a talk for the Lyncean Group of San Diego, Cohen declared: [3]

“So what do we really know? We Know that climate is far too complex and too insensitive to greenhouse gases to pretend that we can ‘stabilize’ it by marginal changes in CO2 emissions, whether it is California’s AB32, or the many incarnations of national legislation or global proposals. We know that government policies offer great economic pain and no environmental gain. We also know that the global warming issue has produced intellectual deception and the subversion of the scientific process, widespread corporate rent seeking, and the gross waste of resources that could have gone to improve our environment. But we still have it within our grasp to restore integrity to the science process and to avert unnecessary economic hardship, especially for the world’s poorest who might otherwise aspire to make great strides this century.” [3]

In a SPPI report titled “On the IPCC‘s Case for Anthropogenic Global Warming,” Cohen wrote:  [2]

“In 1980, a few of us in the research organization of a large multinational energy corporation realized that the climate issue was likely to affect our future business environment. We subsequently started the only industrial research activity in the basic science of climate change.” [2]

As reported at ClimateFiles, a 1981 Exxon Memo from Roger Cohen commenting on a draft report by Exxon’s Werner Glass about the potential consequences of fossil fuel us recognized the potential threat of future climate change: [18]

“Whereas I can agree with the statement that our best guess is that observable effects in the year 2030 are likely to be ‘well short of catastrophic’, it is distinctly possible that the CPD scenario will later produce effects which will indeed be catastrophic (at least for a substantial fraction of the earth’s population). This is because the global ecosystem in 2030 might still be in a transient, headed for much more significant effects after time lags perhaps of the order of decades. If this indeed turns out to be the case it is very likely that we will unambiguously recognized the threat by the year 2000 because of advances in climate modeling and the beginning of real experimental confirmation of the CO2 effect,” Cohen wrote (emphasis added).

“I would feel more comfortable if the first paragraph concluded with a statement to the effect that future developments in global data gathering and analysis, along with advances in climate modeling, may provide strong evidence for a delayed CO2 effect of a truly substantial magnitude, a possibility with increases the uncertainty surrounding the post-2000 CPD scenario.”

According to The Durango Herald, Cohen admitted he had lost a bet with Richard Grossman. Cohen had bet $5,000 suggesting that temperatures would be colder in 2017 than in 2007. The bet was ended prematurely in 2015. [21]

Cohen claimed that he had lost the bet on a technicality, due to the switch from HadCRUT3 (Hadley Centre and University of East Anglia Climatic Research Unit) data, which went out of business in 2013, to HadCRUT4 data. [21]

“Regardless of what’s happening to the temperature, the fact that there’s more carbon dioxide in the atmosphere has provided a major increase in plant life on the surface of the planet,” Cohen said. “Which benefits us all.” [21]

Cohen was one of 16 “scientists” who signed a Wall Street Journal Op-Ed titled “No Need to Panic About Global Warming.” [14]

Media Matter found that the article had misrepresented the position of Yale economist William Nordhaus. SkepticalScience also did a comprehensive examination of the signatories. [15], [16]

Cohen participated in a seminar on global warming with fellow skeptic William Happer during California’s vote on Prop 23, which would have suspended the “Global Warming Act of 2006.”

The seminar was arranged by Dr. Martin Fricke of San Diego “for two experts to review aspects of the ‘debate’.” Cohen’s talk was critical of Michael Mann’s Hockey Stick graph, and supposed “behind-the-scenes-manipulation” of “Climategate” (of which the scientists involved where exonerated of any wrongdoing). [4]

Cohen was part of a 2009 petition, in part written by climate change skeptic William Happer, that urged the American Physical Society to change its position statement on climate change to one more skeptical of mainstream science. [5], [6], [7], [8]

According to a website developed to “remove or tone down the American Physical Society’s 2007 Statement on Climate Change to a less alarmist and more scientifically thoughtful statement,” respondents are urged to contact either Bob Austin or Roger Cohen to “express their response to the question, ‘Should the 2007 APS Statement by scrapped and a new one developed?’”.

The new climate statement recommended by the letter includes the following:

“While substantial concern has been expressed that emissions may cause significant climate change, measured or reconstructed temperature records indicate that 20th –
21st century changes are neither exceptional nor persistent, and the historical and geological records show many periods warmer than today. In addition, there is an extensive scientific literature that examines beneficial effects of increased levels of carbon dioxide for both plants and animals.”

The proposal was overwhelmingly rejected by the APS Council. [9]

Richard Grossman matched Cohen’s bet, altering the terms so that each would instead donate $5,000 to Durango Nature Studies, and the money would be held in escrow until the winner was decided. [20]

“I think part of Roger’s goal was to keep the issue of global warming in the public mind,” Grossman said”It was certainly part of mine in accepting. I believe there is strong evidence of global warming and that much of it is caused by humans.”

Grossman reported in 2018 that he had later med privately with Cohen, who revealed that the real reason he had proposed the bet was to encourage people to question the media and think about climate change. When he asked Cohen how much of climate change he thought was antropogenic, he answered that yes, maybe about a third was human-caused.  “In private, Cohen did not seem so sanguine about denying climate change,” Grossman wrote. [19]

A 2015 article at The Herald stated that Cohen had conceded that he had lost the bet, given that the climate was warmer than in 2007. In correspondence between Cohen and Grossman following the 2015 article, Cohen clarified that he believed “that the climate’s temperature only appears to have increased because the deciding database had changed.”

“We had agreed to use the British climate database, HadCRUT3, but it was replaced by HadCRUT4,” Grossman wrote of the interchange.

“The data is available for public viewing on the internet, and they confirm what anyone who reads the news already knows. The climate is warming. The amount of warming is small in the 10 years of our wager, but significant.”

According to a search of Google Scholar, Cohen co-published one article in a journal on the subject of climate change titled “Global Warming and Carbon-Negative Technology: Prospects for a Lower-Cost Route to a Lower-Risk Atmosphere.” The article was published in the journal Energy & Environment, which has been criticized for its peer-review and is connected to numerous climate change skeptics).

Energy & Environment is edited by climate change skeptic Sonja Boehmer-Christiansen. According to a search of WorldCat, a database of libraries, Energy and Environment is found in only 25 libraries worldwide. The journal is not included in Journal Citation Reports, which lists the impact factors for the top 6000 peer-reviewed journals. The editor of Energy and Environment, Sonja Boehmer-Christiansen has stated that “it’s only we climate skeptics who have to look for little journals and little publishers like mine to even get published.”