Scientists from MIT revealed the most comprehensive study so far on climate change and, as usual, the latest news is not good.

Projected warming of the planet will be at least twice as bad as previously believed, and could kill billions this century unless there is “rapid and massive action” on reducing global carbon emissions.

So freaked out are the researchers by these results, they resorted to using a roulette wheel to illustrate just how dangerous the do-nothing option is.

The MIT scientists published the peer-reviewed results in the Journal of Climate showing a 90% probability of global temperature will rise as much as 7.4 degrees Celsius, more than twice the previous projection from 2003.

“There is significantly more risk than we previously estimated,” says study co-author Ronald Prinn of MIT. “There’s no way the world can or should take these risks.”

Some observers were even more frank. Friends of the Earth climate campaigner Tom Picken said that if the new research by MIT is accurate, the results for the planet would be catastrophic.

“The consequences of such changes would be off the known scale. They are unthinkable,” he said. “A 7.4C rise would mean severe ecosystem collapse worldwide, with total economic collapse in many parts of the world. The planet would face resource wars between people, and you can safely say many, many hundred of millions of people would die.”

The authors described their study as “the most exhaustive end-to-end analysis of climate change impacts yet performed.”

Pulling from a variety of data sources back in 2007, the IPCC (Intergovernmental Panel on Climate Change) projected temperature increases anywhere from 2 to 11 degrees by the end of the century. Now due to this new data, it looks like the higher range of that projection may be closer to the truth.

Their analysis used 400 applications of a computer model, which included looking at complicated factors such as atmospheric, oceanic and biological systems data, as well as global economic activity.

A similar 2003 study had predicted a two degree increase in global temperatures by 2100, but those models weren’t nearly as comprehensive, and they didn’t take into consideration economic factors.

Various studies have shown that even a rise of 2 degrees Celsius in global temperatures would probably destroy 30 percent to 40 percent of all known species, generate bigger, fiercer and more frequent heat waves and droughts, more intense weather events like floods and cyclones, and would raise the sea level by at least a metre, displacing millions.

The other compelling factor with this latest study was the lengths researchers went to try and get their message across to decision-makers, many of who will be gathering in Copenhagen this year for a critical round of UN climate negotiations. 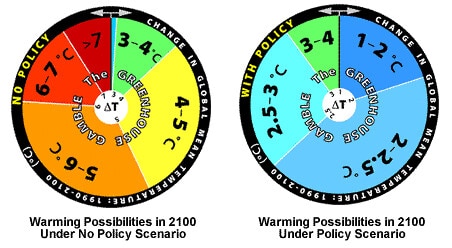 In a welcome departure from the usual communications strategy of releasing an eye-glazing technical report at 4:00 PM on a Friday, these scientists instead created a roulette wheel to illustrate their frightening findings of the known risks of continuing to ignore carbon emissions.

Given the stunning record of inaction to date of these UN climate gatherings, perhaps future researchers will have to resort to a vaudeville act or interpretive dance to get their message across.

Lets hope instead this improved messaging, as well as the new administration in Washington will finally make a difference