During the eight years the Bush Administration denied that climate change was a problem, they were concealing spy satellite images showing the frightening loss of summer artic sea ice.

The de-classified images were released last week by the Obama Whitehouse in an effort to build support for the beleaguered Waxman Markey bill now moving through the Senate.

The satellite pictures clearly show how rapidly the arctic is vanishing due to climate change. In years such as 2007, more than one million square kilometers of summer ice disappeared and has never recovered.

The one-meter resolution images produced by the military spy satellites were far better than anything available to the world’s climate scientists. Too bad that few other than the military and the oil friendly Bush Administration ever saw them – until now.

NASA researcher Thorsten Markus of the Goddard Space Flight Center is thrilled to finally have access to better images than have ever been made available to climate experts. “One meter resolution is that dimension that has been missing…that is why web are so thrilled about it.”

Previous images available to researchers provided up to 30 times less detail, hiding much detail vital to predict the pace of climate change in the arctic. 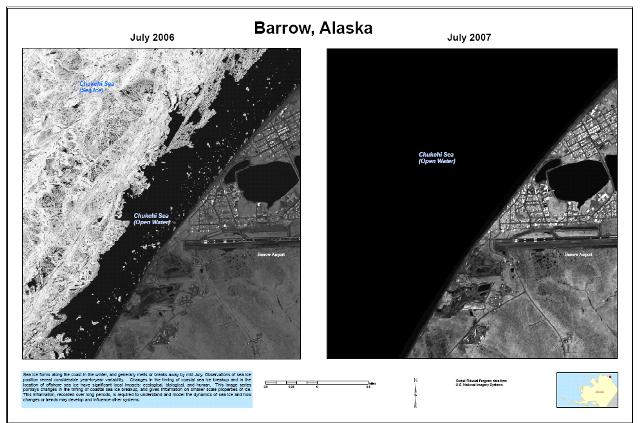 Summer sea ice not only provides critical habitat for keystone species like polar bears, it also reflects enormous amounts of solar radiation back into space. Scientists now worry that as more white ice becomes dark water, the artic ocean will heat faster as more energy is absorbed by open water.

In an ideal (or even OK) world, other federal agencies like NASA or NOAA would have sufficient resources to produce similar images. However the Bush Administration conveniently slashed funding to Earth observation programs outside the military that might have produced pesky data revealing the brisk pace of climate change.

A recent report from the National Academies of Science showed that the Earth observing satellite capacity was in danger of collapse.

Desmog Blog readers will also recall our long and unfinished quest to reveal why the $100 million Deep Space Climate Observatory was never launched even though it was fully built eight years ago and has been sitting in a box ever since. It seems the Bush war on climate science continues to inflict damage to this day.

The Obama Whitehouse is playing catch-up on US science funding, though he is hobbled by years of willful Washington neglect and a now-crippled economy. This spring, he allocated $170 million in federal stimulus spending to improve climate modeling.

The head of the US’s National Oceanic and Atmospheric Administration (NOAA), Professor Jane Lubchenco, warned that the gathering of satellite data – crucial to predicting future climate changes – was now at “great risk” because America’s ageing satellite fleet was not being replaced.

This is obviously no accident. Not only did Washington deliberately not invest in climate science, we now know they concealed vital information from their own scientists.

This latest incredible example illustrates how far the some vested interests will go to hide the truth about climate change. In this case, those vested interests just happened to occupy the highest office in the land.