One year ago today, at about 6:11 pm, a massive natural gas line explosion ripped apart a residential neighborhood in San Bruno, California. The blast was described as “a thunderous roar heard for miles,” and the geyser of fire that spewed forth killed eight people, injured dozens, destroyed 38 homes, and damaged another 70.

Last week, the National Transportation Safety Board (NTSB), which regulates energy and resource pipelines, revealed the findings of their year-long investigation into the causes of that fatal, catastrophic blast.

“Our investigation revealed that for years, PG&E exploited weaknesses in a lax system of oversight,” said NTSB Chairman Deborah A.P. Hersman. “We also identified regulators that placed a blind trust in the companies that they were charged with overseeing to the detriment of public safety.” 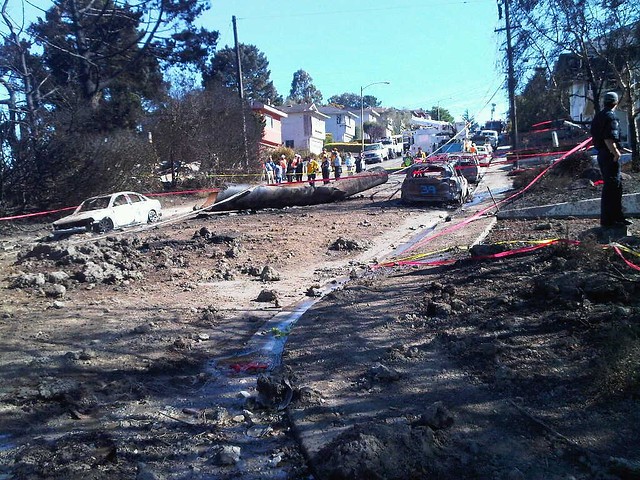 Close Up Pictures of Gas Line Explosion Damage (CC) by smi23le on Flickr.

The report, which also offers 29 new recommendations to the Department of Transportation, the Pipeline and Hazardous Materials Safety Administration, and local regulators, includes this eye-opening section on probable cause. (Emphasis mine.)

The National Transportation Safety Board determines that the probable cause of the accident was the Pacific Gas and Electric Company’s (PG&E) (1) inadequate quality assurance and quality control in 1956 during its Line 132 relocation project, which allowed the installation of a substandard and poorly welded pipe section with a visible seam weld flaw that, over time grew to a critical size, causing the pipeline to rupture during a pressure increase stemming from poorly planned electrical work at the Milpitas Terminal; and (2) inadequate pipeline integrity management program, which failed to detect and repair or remove the defective pipe section.

Contributing to the accident were the California Public Utility Commission’s (CPUC) and the U.S. Department of Transportation’s exemptions of existing pipelines from the regulatory requirement for pressure testing, which likely would have detected the installation defects. Also contributing to the accident was the CPUC‘s failure to detect the inadequacies of PG&E‘s pipeline integrity management program.

Contributing to the severity of the accident were the lack of either automatic shutoff valves or remote control valves on the line and PG&E‘s flawed emergency response procedures and delay in isolating the rupture to stop the flow of gas.

It’s worth noting that these regulatory exemptions and examples of lax oversight are precisely the types of government regulation that many Congressional Republicans are now calling an “unnecessary burden on business.” They call them “job killers,” but many would call them “life savers.”

Finally from the You Can’t Make This Stuff Up Department: The day after the NTSB released its findings, blaming PG&E and lax government oversight, another PG&E gas line exploded, destroying a Cupertino, California condo building. The utility’s crews took over an hour and a half to shut off the gas flow after the explosion, and investigators immediately found at least seven leaks in the line.

While there were thankfully no fatalities in this blast, the NTSB will investigate the blast to determine any “commonalities” between it and the San Bruno tragedy.

I’m working on a much broader, more comprehensive report on the safety and hazards of gas pipelines, part of a series covering energy pipelines in North America. Stay tuned for much more.