Representatives from thinktanks on both sides of the Atlantic heavily involved in lobbying for Brexit and spreading disinformation on climate change are set to meet to formulate their vision for a UK–US trade deal.

The “shadow trade talks” will be hosted by London’s IFT (formerly the Institute for Free Trade), led by Conservative MEP and hard Brexit advocate Daniel Hannan. The group plans to reveal its version of an “ideal” trade agreement later this year.

According to documents originally uncovered by Greenpeace’s investigative unit, UnEarthed, the coalition will seek to significantly weaken existing regulations. This would allow for controversial changes, such as chlorinated chicken and hormone-reared beef imports to be sold in the UK for the first time.

No official presence is expected at the talks. However, organisation’s whose member’s include the man charged with leading President Trump’s environment transition team and a from which a Brexit trade advisor has been plucked will be involved.

The UK’s foreign secretary and international trade secretary are also close allies of the IFT, which is organising the meetings and will launch the coalition’s output in London and Washington. 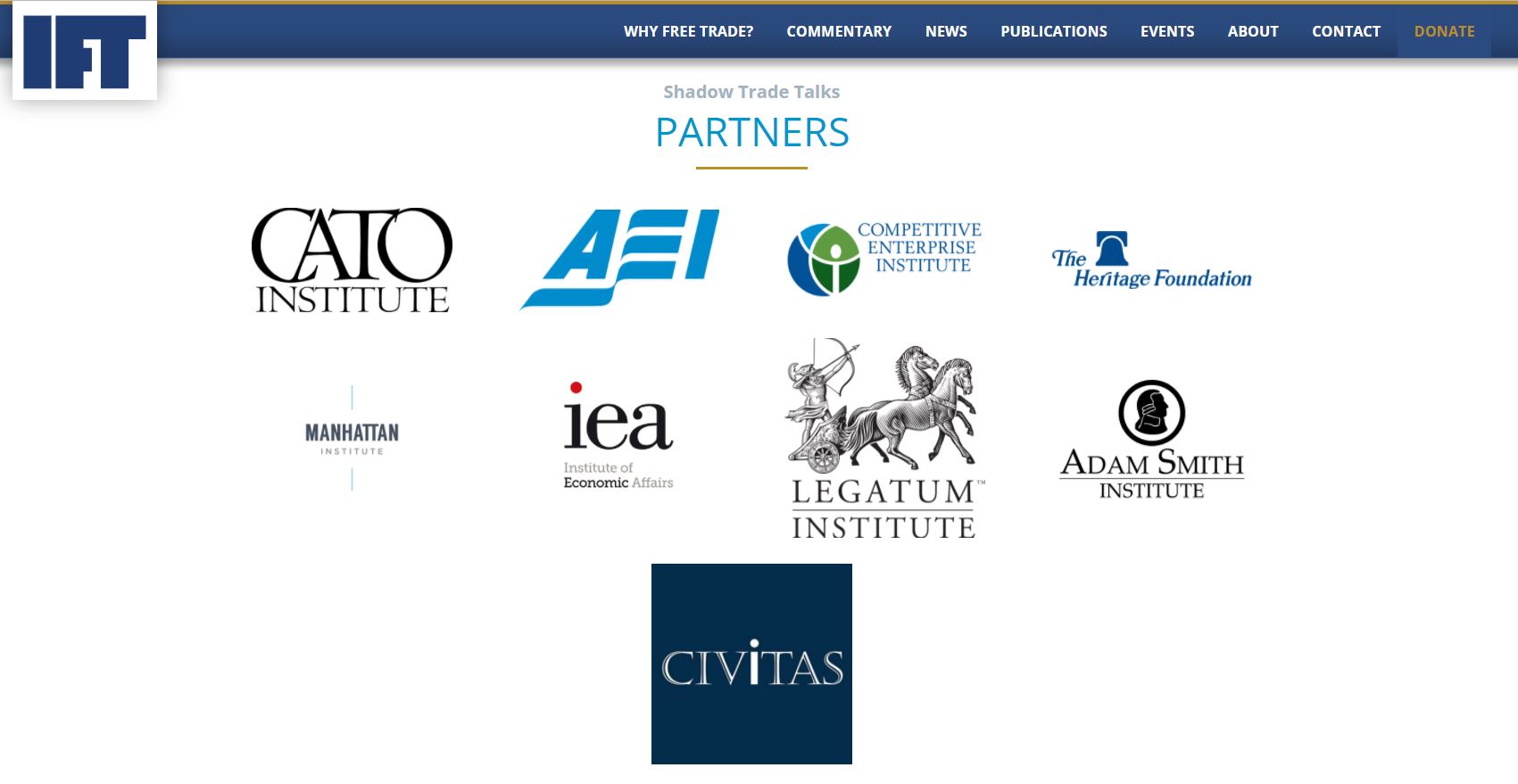 The event will be hosted by the IFT, a thinktank that pushes “the moral case for open commerce”.

Originally called the ‘Institute for Free Trade’, the IFT was forced to drop the word ‘institute’ from its name after an internal inquiry by Companies House. The use of the word ‘institute’ in an organisation’s title is protected by law and reserved for those “that typically undertake research at the highest level, or are professional bodies of the highest standing”.

The controversial group was launched at the foreign office last year by secretary of state Boris Johnson. International trade secretary Liam Fox is also known to be an ally.

Confirmed participants at the shadow talks from the UK are the Institute of Economic Affairs (IEA), the Legatum Institute, the Adam Smith Institute and Civitas.

The IEA sits at the heart of a network of organisations spreading disinformation on climate change working out of 55 Tufton St. The IEA promotes free-trade and deregulation across all sectors, including the environment.

The IEA is the self-proclaimed figurehead of over 80 groups with similar aims worldwide. Related groups such as the Atlas Economic Research Foundation and the International Policy Network are known to spread climate science denial.

The IEA was part of a group of thinktanks that launched a coordinated attempt to persuade the UK to cut green regulations ahead of Theresa May revealing the Conservative Party’s 2017 general election manifesto.

Another member of that coalition was Civitas, also due to be at the shadow talks. NGO Transparify gave Civitas a zero-star, “high-opaque” rating in its league table of funder-transparency in 2017.

Also at the table, and another offshoot of the IEA, will be The Adam Smith Institute. Founded in 1977 with the help of IEA founder, Anthony Fisher, it has opposed green energy, describing solar power in Britain as it as an “impossible dream”.

In contrast to those established figures, the Legatum Institute is a relatively new player.

Described by investigative journalism outlet Open Democracy as “the Brexiteers’ favourite think tank”, the Legatum Institute is funded by a Dubai-based, New Zealand-born billionaire as well as around 40 mostly anonymous donors.

To find out more about the key players spreading disinformation on climate change in the UK, check out our Disinformation Database.

All of the groups have strong ties to climate science denial misinformation campaigns in the US.

The AEI has been described as an avid opponent of the Kyoto protocol, as well as most other environmental regulations.

It was sixth on a list of organisations that received the highest climate skeptic funding between 2011 and 2013, having received significant donations from influential climate science denial funders the Koch brothers and oil giant ExxonMobil.

Also present will be The Heritage Foundation, which has long pushed climate disinformation through its policy statements and ‘policy expert database’, which includes climate science deniers such as Patrick Michaels, Sallie Baliunas, Thomas Gale Moore, Robert Balling, and Fred Singer.

The AEI’s counterpart, the Competitive Enterprise Institue (CEI), is also no stranger to the UK and Brexit.

The group describes itself as being “dedicated to advancing the principles of limited government, free enterprise, and individual liberty.” Oil giant ExxonMobil was one of CEI‘s top funders, contributing at least $2.1 million since 1997.

The group’s director of energy and environment, Myron Ebell, who was charged with leading Donald Trump’s environment tranisition team despite never having spoken to the president, held a bizarre press conference in London last year, hosted by the UK’s Global Warming Policy Foundation (GWPF).

The GWPF is partly funded by two former IEA-trustees, Nigel Vinson and Neil Record. The final US participant in the shadow talks, the Manhattan Institute, was (like many of the organisations on the list) co-founded by IEA grandee Anthony Fisher.

The Manhattan Institute has contended that it is “unclear” whether human activity is causing global climate change. The Institute has received $635,000 from ExxonMobil since 1998.

The Cato Institute, listed on the IFT website as a “partner” but not as a participant in the shadow talks, has also received major funding from the fossil fuel industry and climate science deniers.

It was founded by fossil fuel magnate Charles Koch, who with his brother David, has become one of the world’s largest funders of climate science denial. The Institute has also received $125,000 from ExxonMobil since 1998.

To find out more about the key players spreading disinformation on climate change in the US, check out DeSmogBlog’s Disinformation Database.