These Are the Fringe MPs Against the UK's Coal Phase Out

The UK government regularly trots out its long-standing commitment to phase out coal power by 2025 as an example of its commitment to tackling climate change.

Evidently, this continues to really bug a fringe set of MPs.

A cross-party group of MPs have signed an early-day motion that says “coal can be, and should be, part of that UK low carbon energy generation mix beyond 2025” — effectively signalling their opposition to the government’s plan.

18 MPs initially signed the motion — though two have since asked to have their signatures removed after being alerted to the motion by DeSmog UK, saying they were added in error.

The motion was proposed by Labour MP Ronnie Campbell, a pro-Brexit, former coal miner who represents Blyth Valley in Northumberland. He has been joined by 11 of his party colleagues.

Their votes would appear to go against party policy. Labour has previously expressed its support for the coal phase-out, alongside additional support for clean energy.

Alan Whitehead, Shadow Minister for Energy and Climate Change, told DeSmog UK that, “Labour strongly believes that coal should be completely phased out by 2025, if not before, and a future Labour government would enforce this rule.”

He added that while the party “sympathises with a desire to make carbon capture, storage, and utilisation (CCSU) work for conventional power, there is no prospect that CCSU can be in place before the 2025 unabated coal phase out, and no case for maintaining unabated coal on the system in case it comes along on the end.”

“However CCSU technology will be important in the future for a variety of industries as well as heat and power generation to create negative emissions with the potential to create new markets and business opportunities”, he said. 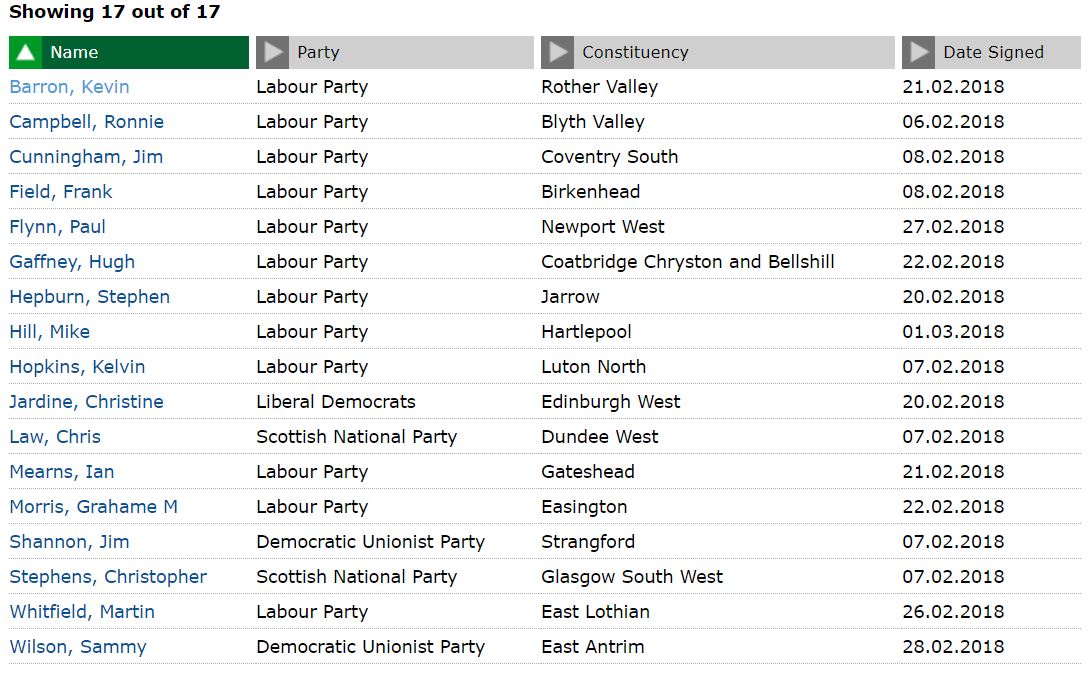 Wilson is a former environment minister in Northern Ireland, who believes human-caused climate change is a “gigantic con” and an “hysterical semi-religion”, and denies that there is a scientific consensus on the causes of climate change.

The Conservative government currently rely on DUP votes to pass key pieces of legislation in parliament.

One of those is Chris Law, the SNP’s Climate Justice and International Development spokesperson. Law told DeSmog UK that he voted for the motion because:

“There are coal fired power stations in the UK and across Europe particularly in Germany and Poland.”

“Although clean coal technology is relatively new – it is emerging in Canada and the US.”

“As climate justice spokesperson, the biggest threat is the continuing growth of CO2 gases and it’s clear that all must be done to ensure energy supply and a reduction in these gases.”

Coal is the most polluting fuel of all, and is linked to hundreds of thousands of premature deaths each year through associated air pollution.

The SNP told DeSmog UK that another of its MP’s, John McNally, had his name added in error and has now had his signature removed.

The one Liberal Democrat to sign the motion, Christine Jardine, told DeSmog UK it was also an “administrative error” and that her signature would be removed.

None of the other MPs that voted for the motion responded to DeSmog UK’s request for comment.

Conservative MP Simon Clarke was quick to criticise his colleagues on the opposition benches.

He tweeted that it was “absolutely wrong” for Labour MPs to vote for the motion and “entirely right” that the government should seek to end the use of coal power.

Absolutely wrong for so many #Labour MPs to be backing keeping high polluting #coal beyond 2025 – @Conservatives are entirely right to be showing global leadership on ending its use. Lots of alternatives to coal that are both cheaper and won’t poison our planet. https://t.co/yyrgNFQRgS

Early day motions are a way for MPs to put on record their views on a particular subject, and potentially drum up support and publicity for their position.

There is no formal rule about how many signatures are needed for a motion to get debated on the floor of the House of Commons — though the vast majority never are.

Campbell’s early day motion states that “with commercially deployable carbon capture, utilisation and storage (CCUS) and ultra-super critical coal fired power stations”, the fuel should continue to be part of the UK’s energy mix beyond 2025.

Jonathan Marshall, energy analyst with the Energy and Climate Intelligence Unit thinktank, told DeSmog UK that even with such technology, coal power stations would not meet the emissions limit outlined in the government’s coal phase out plan.

He said: “Even the most up to date coal technology will fall well foul of the 2025 pledge. This sort of kit does not exist in the UK, so would need to be built afresh, before being shut down inside a couple of years. No investor would give this notion the time of day, especially without a route to market for carbon capture.”

But this is not true, according to Marshall.

“Even if it was built in the UK, the cost of generating power from coal is now undercut by that from gas, which is set to be increasingly outcompeted by renewable technologies.

“Building new capacity or propping up our ageing coal fleet even longer not only boosts pollution, but delays building new, low-cost and low-carbon generating capacity which is springing up in vast quantities around the world.”