How cosy is the relationship between free market ideologues pushing for greater deregulation and the government? Very, it turns out.

The IFT (formerly the Institute for Free Trade), a hard-Brexit thinktank tied to the UK’s climate science denial network enjoyed strong support from two government departments ahead of its launch at the Foreign Office at the end of last year, internal emails show.

The IFT describes itself as a “private, not-for-profit, non-partisan research foundation” advocating “unrestricted commerce both with the EU and with the rest of the world”.

It is based at 57 Tufton Street, sharing an office with the anti-renewables thinktank the Centre for Policy Studies, and next door to organisations at the heart of a UK climate science denial network working out of 55 Tufton Street.

Documents previously obtained by Greenpeace’s investigative unit UnEarthed by freedom of information request were released in full by the Foreign Office (FCO) . They show how the IFT used its close relationship with key political figures in the FCO and the Department for International Trade (DIT) to organise its launch, push its messages to the media, and control the narrative coming out of its launch event .

The IFT launch made waves last September after it was revealed foreign secretary Boris Johnson waived the usual fee for a room hire in the FCO building arguing the think tank supported government policies.

The documents exposing the circumstances around the IFT’s launch show the connections between right-wing pro-Brexit groups and climate science denial networks continue to be exploited for political purposes. They raise serious questions over the potential influence of think tanks such as the IFT over government policy.

Both Johnson and trade secretary Liam Fox are known to have ties with right-wing networks themselves linked with organisations and individuals spreading climate science disinformation. Both Johnson and Fox made speeches at the event.

The documents show the Cabinet Office’s ethics director had raised concerns about Johnson’s decision to spare the think tank the £6,000 fee for using a FCO room, as UnEarthed revealed. The FCO confirmed that the IFT was not charged retrospectively for the event.

A day after the launch, special adviser David Frost thanked the FCO team for their work in helping to organise the event, recognising “how much work goes into something like this, especially when quite so many people show up on the night”.

“The launch event has I hope reminded everyone of why we all benefit [from free trade],” he added. 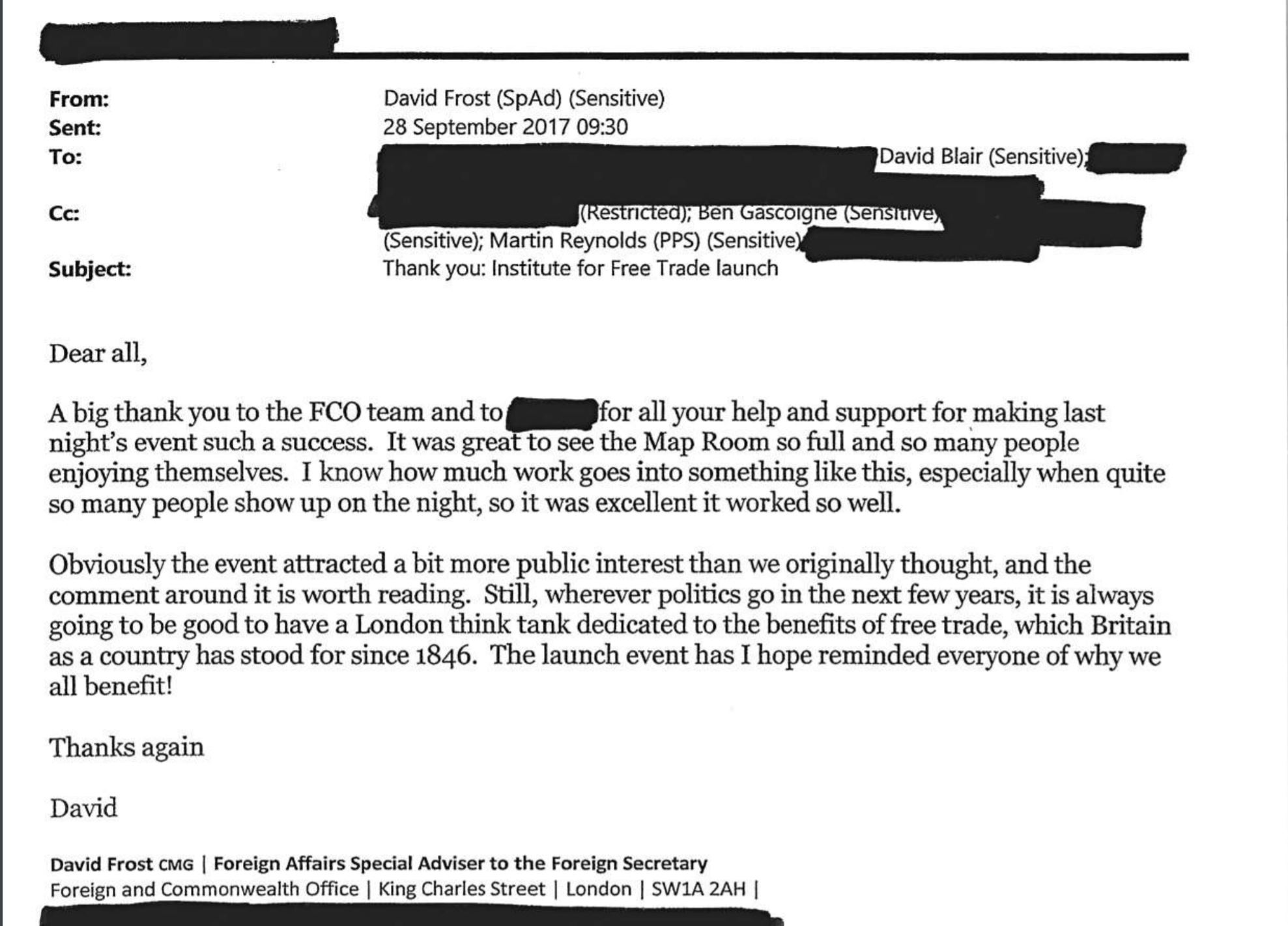 A summary of the event published by the FCO’s trade diplomacy unit clearly states that “much of it [the launch] has been arranged through political channels by SpAds [Special Advisers].”

The cosy relationship between the IFT and Johnson’s office is highlighted by a letter between the thinktank’s president Hannan and the foreign secretary.

In an email dated 4 April 2017, Hannan thanked Johnson for offering the premises of the FCO as venue for the event. He then told Johnson “obviously, we’d want you to speak; no-one does it better” and offered to organise the event around his availabilities.

“We want to be visibly supporting the government’s agenda rather than simply being another think tank,” Hannan said.

The event was also used as an opportunity for Johnson to meet some foreign dignitaries and diplomats.

In an email to Frost, the FCO’s Trade Diplomacy Unit said Johnson “should particularly aim to have a few words with …… [names redacted] and Ajay Sharma, HMA [Her Majesty’s Ambassador] Doha, plans to attend”.

‘Boris is the pull let’s face it’

Correspondence between special advisers suggest both the FCO and the DIT were keen to publicly show their support for the think tank — even bickering for the credit.

However, two days before the IFT’s launch, an email from the FCO’s Trade Diplomacy Unit to the department’s special advisers said: “We do no see this as a major media opportunity and are emphasising this as an IFT not an FCO event.”

That soon changed. In an email to other FCO advisers, Frost stressed: “Formally, we [the FCO] are the hosts and the event was set-up via us not DIT.”

Separately, Frost added the event was taking place thanks to “the courtesy of the FCO” and that “Boris is the pull let’s face it” although the event would be a “booster event” for the DIT. 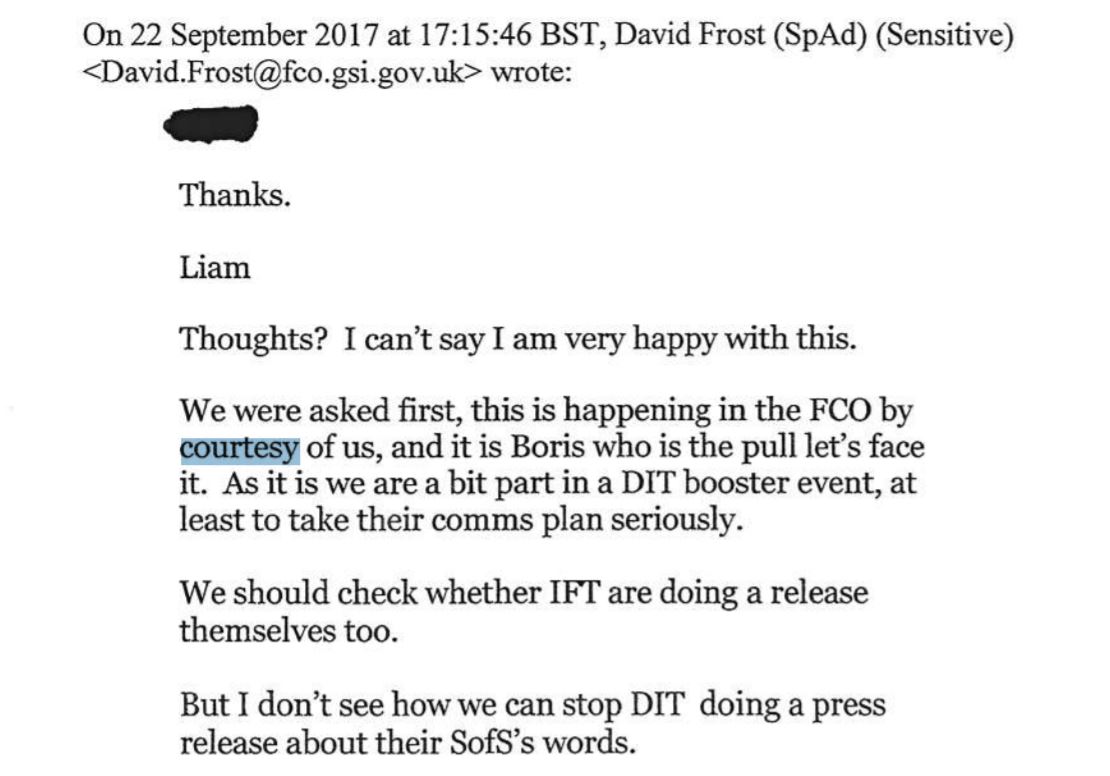 For its part, the DIT’s own media strategy included a commitement to “tweet our support for the formation of the IFT”.

The involvement of both departments was such that the IFT asked whether the FCO logo could be added to the event invitation. Documents show FCO advisers recommended against the use of the department’s logo, citing concerns over the fact that it would have to include the DIT’s logo as well.

Instead, the wording of the invitation card was agreed to read “Daniel Hannan MEP invites you to the launch of the institute for free trade with foreign secretary Boris Johnson and trade secretary Liam Fox.”

A single press release signed by the IFT, the FCO and the DIT was also sent out to promote the thinktank’s event.

Other senior cabinet members including environment secretary Michael Gove and Penny Mordaunt, then work and pensions minister, were invited.

The documents also shed some light on how the IFT and FCO hoped to steer the media coverage of the event to emphasise support for the thinktank’s unregulated free trade agenda.

Emails show “notable media attendees” including Tom Newton Dunn, political editor at The Sun, and Charles Moore from The Telegraph were among few journalists friendly to the IFT’s agenda invited to the launch.

Other “friendlies” including Brexit Central, The Telegraph,The Mail, The Express and The Sun would be briefed in advance with sections of Fox’s speech.

Emails reveal that despite increasing media interest, the IFT refused to allow other publications to attend the launch. The final media guest list was nearly entirely redacted in the documents obtained by freedom of information request.

A separate email from the FCO’s media office, stated that broadcast media including both Sky News and the BBC were refused access to the launch.

In a joint response, the DIT and the FCO told DeSmog UK: “The IFT event expressly fulfilled a key objective of HMG policy – the championing of global free trade. Politicians were invited from parties from across the political spectrum, as were a range of other guests (diplomats, think tankers, etc).

“The government will continue to make the case for free trade to help provide economic stability and lift millions out of poverty, whilst increasing productivity and offering consumers better choices.”