Until February, Christine Harbin spent much of this decade fighting against state and federal clean energy initiatives for organizations with close ties to the petrochemical billionaire Koch brothers. Now, however, she has joined the Trump administration as a senior adviser for external affairs in the U.S. Department of Energy’s (DOE) Office of Electricity Delivery and Energy Reliability, which deals primarily with the electricity grid.

Before joining a number of other Koch network alum in the Trump administration, Harbin served as vice president of external affairs at Americans for Prosperity, a Koch-funded group with nearly three dozen active state chapters pushing for conservative legislation at the state and national levels. She had worked for Americans for Prosperity since 2012.

Before that, she was employed for a year with the American Legislative Exchange Council (ALEC), a Koch-funded and founded group that writes so-called “model legislation” for state governments and cultivates relationships with mainly GOP state legislators through its meetings and summits in the interest of advancing “limited government, free markets, and federalism at the state level.”

She also used her position in Americans for Prosperity’s national office to coordinate local “grassroots” groups in campaigns and messaging against wind power. The first of these efforts came to light in 2012, as David Anderson explained on the Energy and Policy Institute blog:

“[I]t was Christine Harbin of the Koch-backed Americans for Prosperity that organized a 2012 letter signed by a number of local anti-wind groups and national organizations backed by the Koch brothers, according to a document found on the website of one of the signers, Auglaize Neighbors United. Among the signers were AWED, Freedomworks, and the American Energy Alliance.”

Evidence of Harbin’s coordination can be seen in the draft letter that was circulated to the local groups: 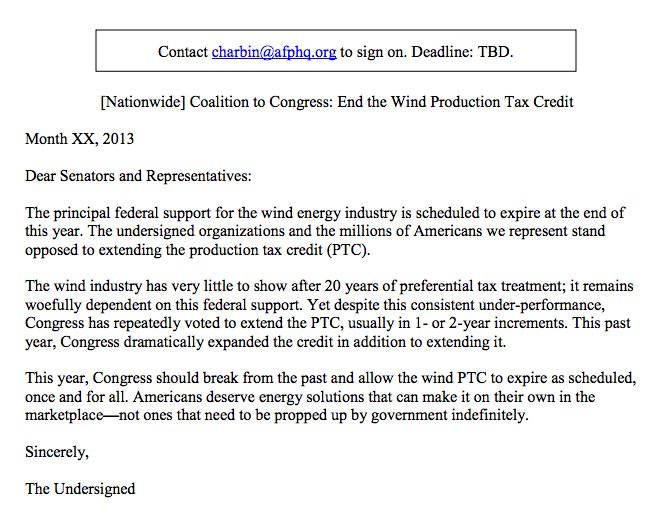 And also in the final product, which was signed by dozens of national and local groups and published online: 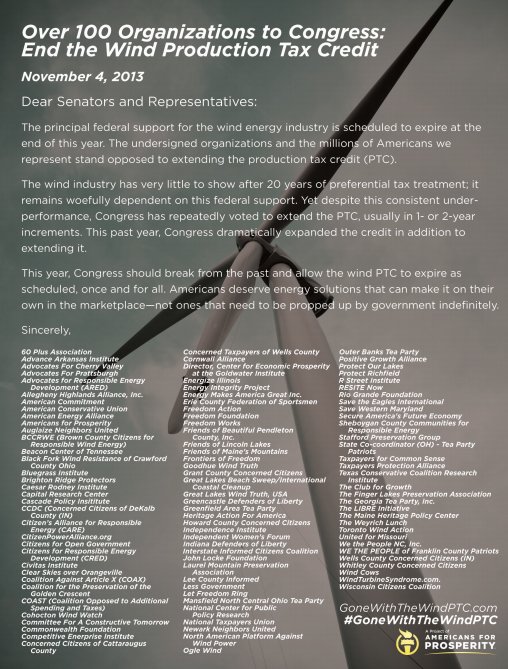 In June 2014, a similar letter was published as a full page ad in Politico. Further investigation by The Energy and Policy Institute found that some of the “organizations” that signed the letter were little more than names on paper, with no online presence or formal organizational structure.

In December 2015 and January 2016, Harbin penned a pair of op-eds for The Hill in which she bashed the production tax credit (PTC) for wind power, which Congress was in the process of extending through 2020 in a massive omnibus spending bill. Though she called the PTC “corporate welfare” and “forced investment” for American taxpayers, she neglected to mention the much larger and permanent tax breaks and subsidies that are enjoyed by the fossil fuel industries, such as the $4.86 billion (on average, in today’s dollars) that the oil and gas industry has received every year since 1918.

In February 2018, Harbin left Americans for Prosperity to join the Department of Energy, where she will work alongside a number of fellow Koch network alums.

But if a genuine concern of Harbin’s is seeking “energy solutions that can make it on their own in the marketplace — not ones that need to be propped up by government indefinitely,” she may get a shock at the DOE under Secretary Rick Perry.

Last fall Secretary Perry proposed a controversial rule, which sought to prop up ailing coal and nuclear plants by guaranteeing to pay them for all of their power, whether or not it was needed, in the name of grid “resiliency.” Perry’s plan contradicted the conclusions of his own agency about the state of the American power grid, and was ultimately rejected.

The DOE‘s Office of Electricity Delivery and Energy Reliability, where Harbin now works, is charged with “[developing] new technologies to improve the infrastructure that brings electricity into our homes, offices, and factories, and the federal and state electricity policies and programs that shape electricity system planning and market operations.”

Under the Obama administration, this office focused greatly on electric grid reliability and promoting the “next generation” of transmission technology.

If Harbin’s recent work history in Koch-funded organizations is any indication, she will use the office to promote fossil fuel generation as a sort of “cure all” for electric system reliability issues, and to bash wind and solar power as “unreliable.”