Shell Brandalism and the Pop Stars of Big Oil

In a week that has seen a number of blows for the prospects of ecological stability – there’s been an innovative backlash to @Shell ‘s greenwashing campaigns. Subvertised posters have appeared in bus stop advertising panels in London, Leeds, Bristol and Oxford ahead of Shell’s #MakeTheFuture spin festival, which has co-opted pop stars in a bid to win back young people.

Members of the ‘subvertising’ group, Brandalism, have installed subverted Shell adverts across sites in London, Leeds, Oxford and Bristol to criticise the Make The Future advertising campaign by oil and gas major Royal Dutch Shell.

The action comes just weeks before Shell’s Make The Future Live festival, which starts on July 5th in Queen Elizabeth Olympic Park. The artworks highlight the hypocrisy of Shell’s recent PR campaigns promoting itself as a responsible and sustainable company whilst it continues to attract criticism for its fossil fuel extraction, human rights abuses, aggressive lobbying against climate legislation and historic climate denialism (as detailed by DeSmog UK).

In London, a number of subverted ads have been posted outside Shell HQ as well as the National Theatre, a cultural institution that has suffered criticism lately for their ongoing corporate partnership with the company. Some of the artworks across the four cities feature images of Shell’s #MakeTheFuture sponsored pop stars including Pixie Lott, Jennifer Hudson, Luan Santana, Tan WeiWei, Yemi Alade and Stever Aokim, with the messages “Don’t fall for Pop Star PR.”

“This is a millenial backlash against Shell’s greenwashing campaigns. Faced with a public legitimacy crisis, and crumbling social licence to operate Big Oil companies like Shell and BP are spending millions trying to convince young people that they are a responsible energy company but actually they’re just dirty fossil fuel companies first and foremost. We’re not buying their PR spin no matter how many pop stars they get in their pocket.” 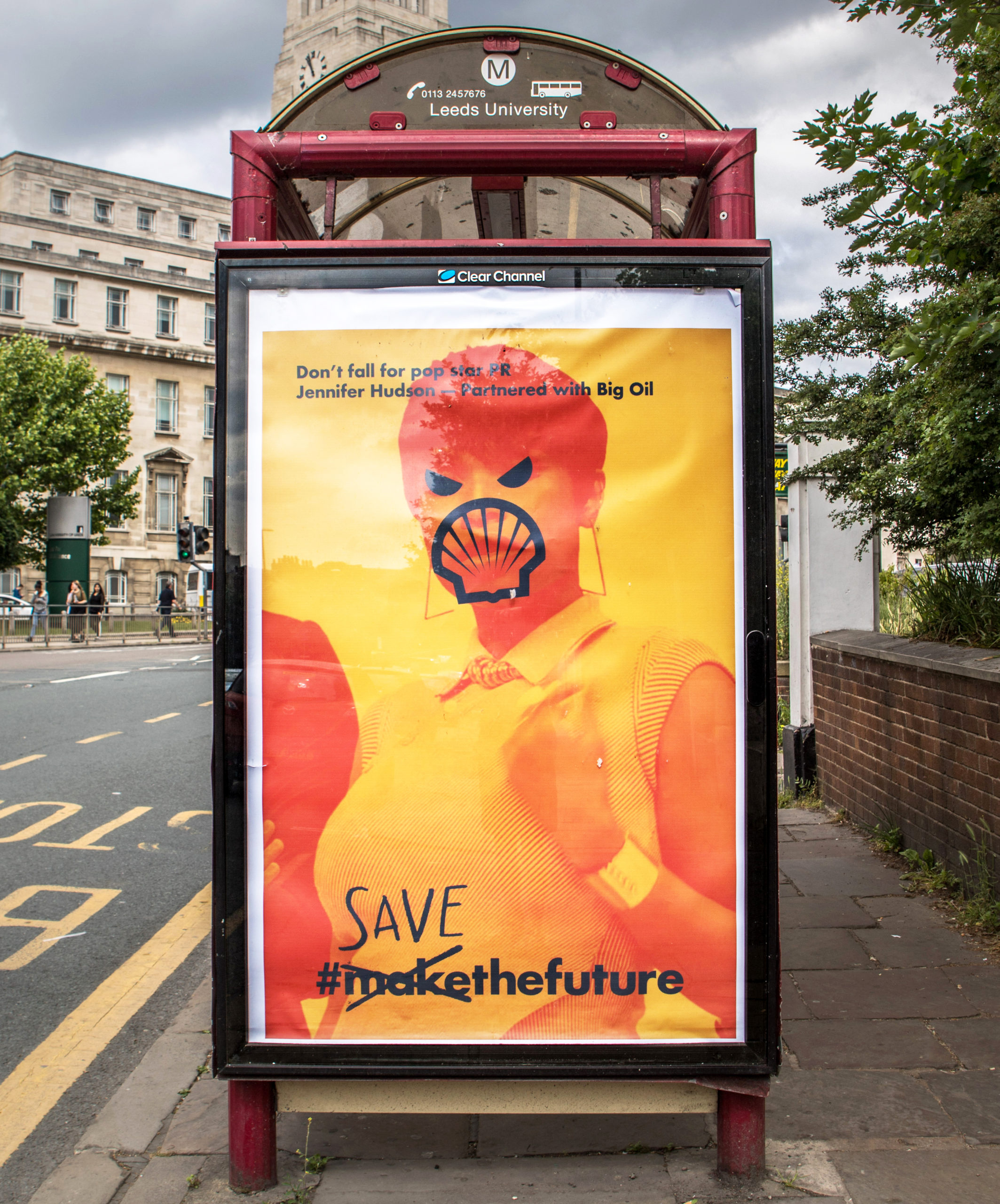 The group Brandalism issued a statement explaining their actions saying:

“Several of the artworks installed by Brandalism reference Shell’s destructive corporate practices. As well as increasing pressure in terms of their role in worsening climate breakdown, Shell is facing more than 50 lawsuits for its involvement in corruption, human rights abuses and environmental destruction.

“In April this year, Friends of the Earth Netherlands announced it would be taking Shell to court for undermining the ambitions of the Paris Agreement . Last November, Amnesty International called for a criminal investigation regarding on-going allegations over Shell’s role in human rights abuses carried out by the Nigerian military in the 1990s. They also risk a multi-billion dollar bill due to earthquakes lined to its gasfield in the Netherlands.” “Shell’s PR-spin is outrageous, misleading and  dangerous. Behind the pop-star veneer of Make The Future, you find a company complicit in human rights abuses and corruption and that is hell bent on digging up as much oil and gas as possible. We hope that this public art campaign and future actions during the Make The Future event can expose the truth behind their glittery brand. Shell knew about climate change for decades and did nothing.” The group explained to DeSmog UK that:

“Brandalism’s actions today are part of larger effort of more than twenty UK-based organisations to protest and disrupt Shell’s Make The Future event. The group has created a spoof Facebook event page and promises a series of creative and disruptive actions during the four days of the festival. The series of actions are set to culminate in a large ‘The People vs.Shell’ dodgeball game outside the Make The Future event in Queen Elizabeth Olympic Park. Groups involved in this wider effort include members of the Art Not Oil Coalition and several local fossil fuel divestment groups.”

You can see more of the images here.