'Today is Pivotal': Lancashire Campaigners Made to Wait One More Day for Fracking Fate

It’s difficult to hear Tina Rothery’s gloomy pronouncement, as heavy rain has just started to hammer the canvas of the hoop house where we are sat. She has been stationed here for hours, along with a small group of fellow activists, refreshing her phone, waiting to see whether the High Court has lifted an injunction against Cuadrilla, allowing the company to finally start fracking in a field in Little Plumpton, Lancashire.

Rumours were that the decision would be announced at 4pm. Everyone’s tense, awaiting news from the London courtroom. So far, all that has arrived is Storm Callum.

It’s cold inside the hoop house; it’ll be colder when winter sets in. This makeshift camp is based in a small shrub nursery called Maple Farm, a space that was volunteered by sympathetic local businessman, John Tootill. It’s filled with a strange assortment of items: a hobby horse wearing a helmet, aubergines, bunting. This is their life now.

They’ve been protesting fracking since January 2017, when Cuadrilla started construction work, and this place has practically become home.

Just up the road, Cuadrilla has already installed a rig, ready to start fracking as soon as the ban is lifted. The activists have named it Rick.

These past two years, they’ve been keeping watch on the site, installing banners and artwork, talking to visiting politicians, and, in some cases, getting arrested.

Rothery has been in trouble more than most.

Protesting against the Conservative’s support for fracking at the party’s annual conference – the Tories are the only party in the UK to still support shale gas extraction – argued with a woman invited to talk about the suicide of her daughter.

“I made comments that were extremely ill advised and I apologise unreservedly and unconditionally,” she told a local Blackpool newspaper.

The woman “had been telling members of the group that she supported fracking and we all feel so passionate about our cause and I acted out of character,” she said.

They share the night shifts among them, logging the registration numbers of all the vehicles that enter the complex. It’s been important to keep a constant presence, demonstrating an opposition to fracking that’s not about to go away.

Despite this constant vigil, Cuadrilla had won the go-ahead to start fracking this week – after the government intervened to overrule the local council.

A last-minute reprieve was granted after a fellow activist, Bob Dennett, filed an injunction claiming that Lancashire County Council had “no clear and robust plan” to evacuate residents should an earthquake occur. A small tremor from the site catalysed a nationwide moratorium on fracking in 2011. Today’s hearing is to decide whether this injunction should be upheld.

It’s a significant moment. If the judge quashes the injunction, Cuadrilla are unlikely to waste any time – Cuadrilla’s Chief Executive claims the delay to the company’s plans is costing it £94,000 a day. 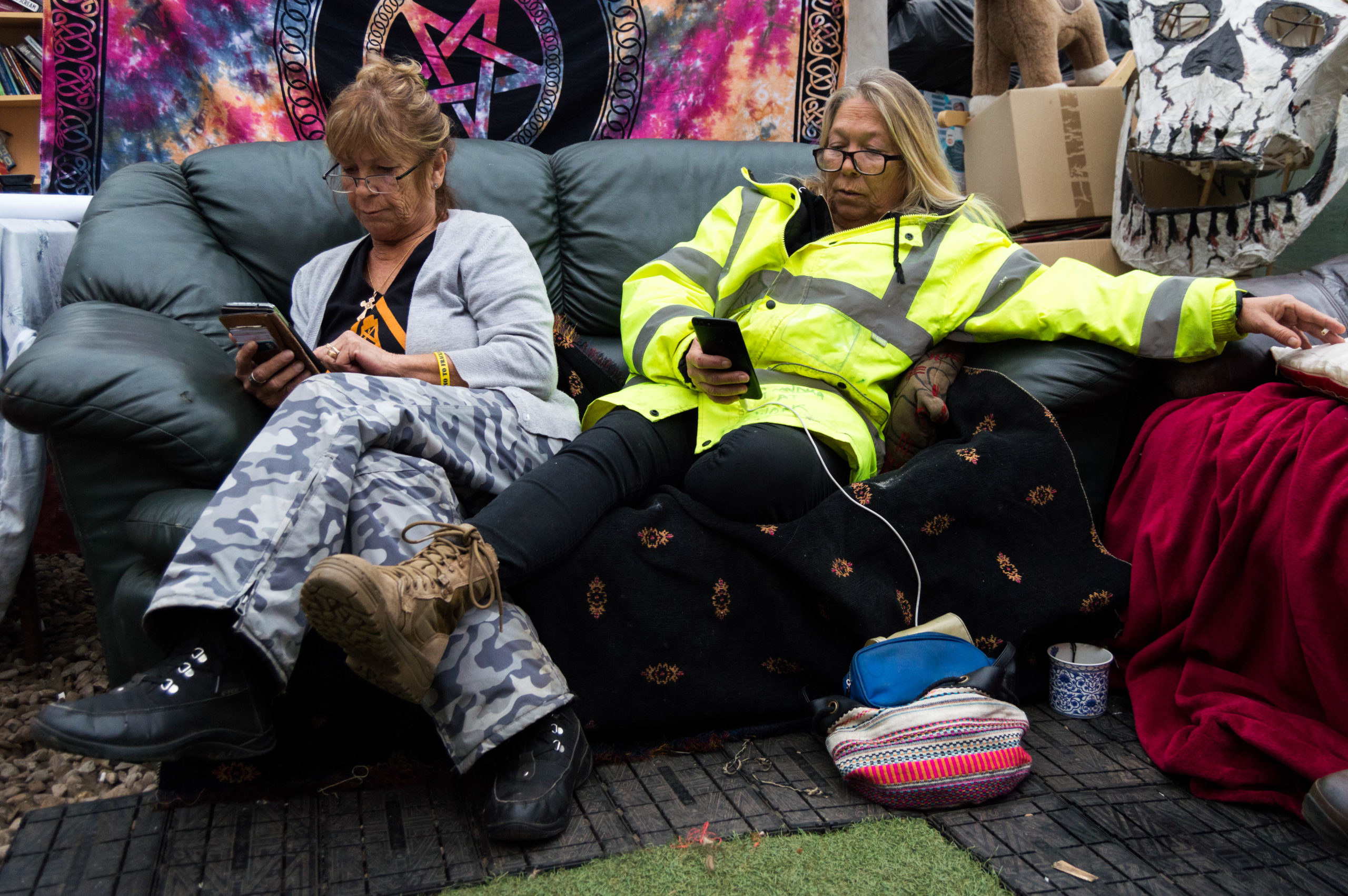 “It’s the last thing between us and fracking,” says John Hobson, looking up briefly from his phone. He is wedged between a large papier-mâché phoenix and picture of a Lancashire Rose, both emblazoned with anti-fracking slogans. “That’s why we’re all on tenterhooks about it.”

The injunction has cast a brief ray of sunlight into this camp – a glimpse at what it feels like not to have fracking on your doorstep. “It’s been an amazing introduction to what it feels like not to be apprehensive anymore,” says Rothery. That feeling has now dispersed. Every buzzing phone causes a ripple of anxiety. Any update, however small, is eagerly received and shared with the group.

“It’s a common-sense judgment. We don’t know what to do if there’s an accident on the site,” says Katrina Lawrie, an activist who now lives in a caravan on Maple Farm, of the injunction.

She describes herself as someone who likes chess and tea, but also with a keen sense of justice. That’s what pushed her to the anti-fracking battle. “If we don’t fight here and win it here, we have lost for everyone else. Today is pivotal.”

Finally, the news everyone has been waiting for comes in – the judge has reserved judgment on the case till tomorrow.

For these activists, it’s a muted success: One more day without fracking, in a battle where every day counts. They’ll be back tomorrow to await the final outcome and, whatever the outcome, to continue the fight.