'Green is Great': Coal, Oil, and Greenwash at the UN Climate Talks

We were told to meet by the glowing jellyfish. Pascoe Sabido was holding it aloft, its plastic tentacles tangling, as journalists and campaigners closed in around him. A campaigner for Corporate Europe Observatory, he had promised us a “Toxic Tour” of COP24, a chance to see the influence of energy companies lurking behind the green veneer of the countries gathered here to tackle climate change.

Except, in some cases, the veneer was wearing thin — or, in Poland’s case — had rubbed off entirely. The tour began next to the logos of the conference’s sponsors projected onto the wall. It’s currently advertising LOTOS Oil, a Polish company that operates mainly in Norway. Other sponsors include JSW, a coal company, and PZU, the largest insurer of the Polish coal industry.

Overt fossil fuel branding was too subtle an approach for the Polish hosts of this meeting, however. We walk on to the pavilion of the city of Katowice. It has been constructed from chunks of coal stacked in metal crates. Not quite believing, I rub my finger against one of the blocks. My fingertip comes away black.

Between these crates are windows containing products made from this “black gold”, which are accompanied by poetic descriptions. Coal is a “vital part of our culture, community and livelihood,” according to the designers of a bar of coal-themed soap. Here, a Polish campaigner highlights the effect that coal is having on people’s health. Smog is responsible for the premature deaths of 50,000 people every year, according to the European Environmental Agency. But at least the Katowicians have been honest about their exaltation of coal — it’s hard to accuse them of hypocrisy.

The same can’t be said of the British, who are making more of an effort to trumpet their green credentials at their pavilion, including a display on the Climate Change Act.

Our toxic tour guides weren’t buying it, citing both the government’s commitment to fracking and the behaviour British companies overseas — in particular, of Shell’s operations in Nigeria, where decades of oil extraction has led to deep-rooted contamination, and has led to condemnation from the UN.

“The UK is claiming to be a climate leader, trying to do clean stuff back at home, but one of the biggest corporations that pays some of the biggest taxes in the UK, is in other climes, in Africa, especially in Nigeria, polluting the land, releasing a lot of gas into the atmosphere. Land is lost, livelihoods are gone, rivers are polluted,” says Babawale Obayanju of Environmental Rights Action in Nigeria.

“You can’t claim to be a leader when what you’re doing at home you’re not practising outside.” 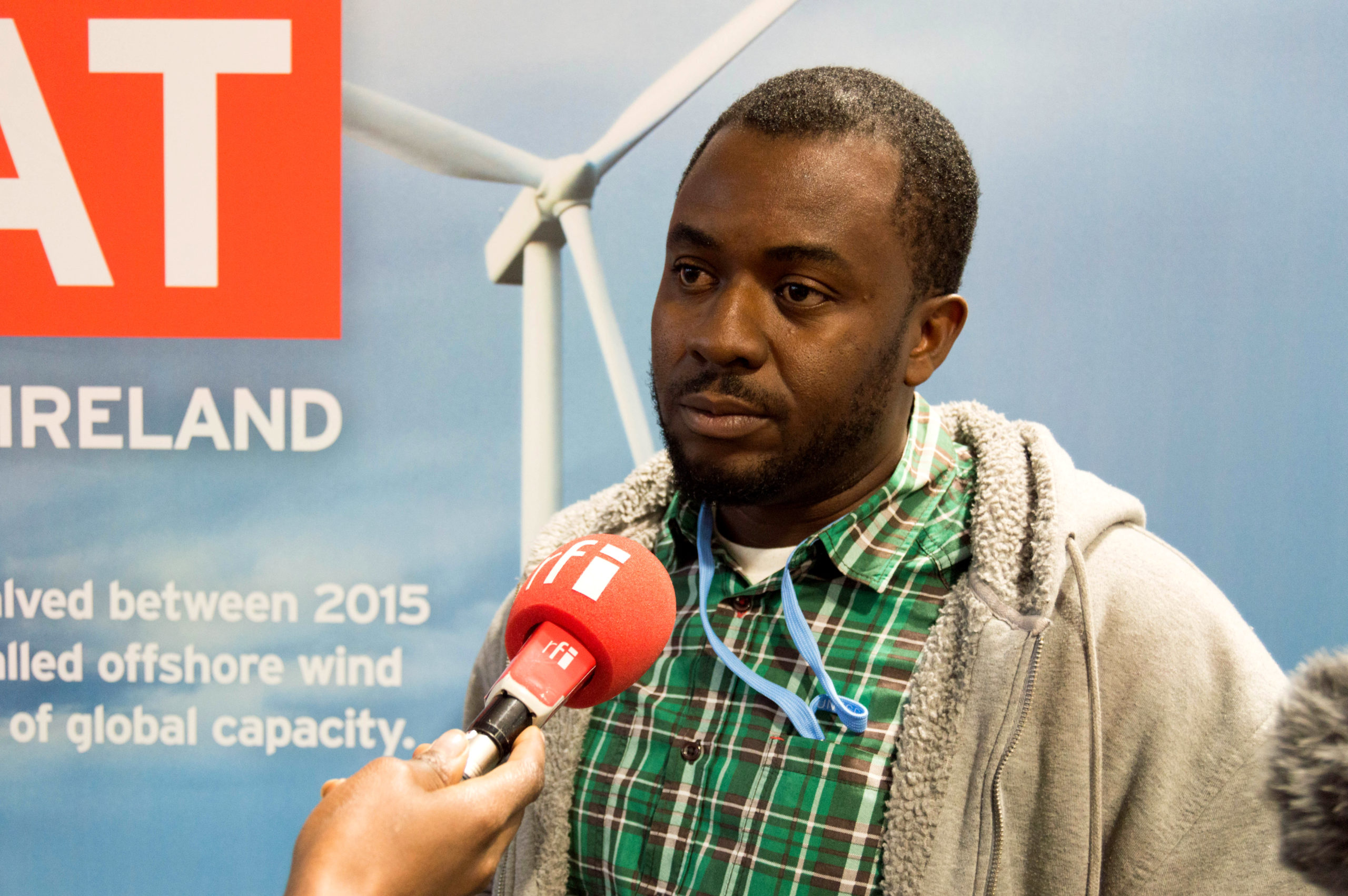 The EU and Japanese pavilions were the next stops on the tour. The EU comes under fire for an event it is hosting next week, on achieving a net-zero emissions energy system by 2050, featuring the president of GasNaturally, a lobby group, while the Japanese receive criticism for their funding of coal-fired power plants.

Two campaigners from Oregon and Colorado, in the US, also criticised the development of fossil fuel projects in their states, and enjoined their governor and governor-elect, who both say they are committed to tackling climate change, to adopt a cleaner route.

They didn’t speak at their own country’s pavilion, because it doesn’t have one. 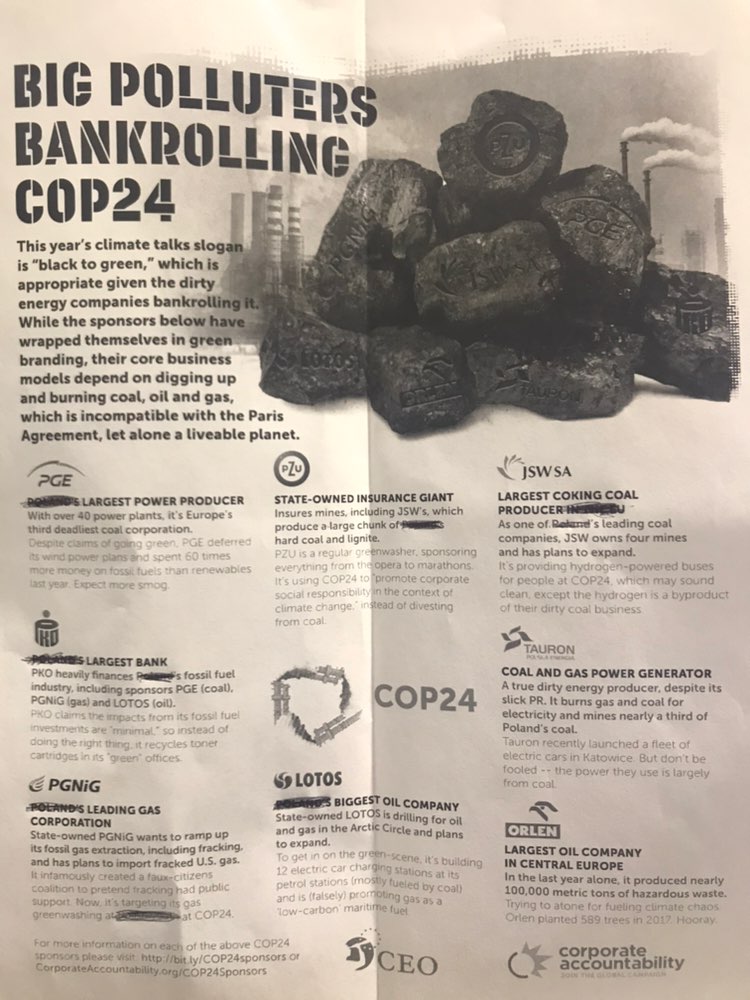 Why does it matter? Because the persistent interference from fossil fuel companies could affect countries’ abilities to negotiate effectively for climate action, says Sabido, including the Paris Agreement “rulebook” that is at the centre of the negotiations during COP24.

“Unfortunately, we’re not going to get that [rulebook] because those same industries causing climate change are still setting the agenda, are still in bed with our governments, and are still making sure that their profit comes first,” says Sabido. He is advocating for a “firewall” between polluters and policymakers, both at the UN and national level, so that corporate money is no longer directing climate change policy.

First, Sabido will have to make it to the end of the COP. The conference organizers are not happy with his efforts to highlight corporate sponsorship, he says, and have forbidden him from distributing flyers highlighting the role of Polish and European fossil fuel companies.

He sends me a version of the flyer, hand-redacted by a member of the secretariat, where every occurrence of the word “Poland” or “EU” has been struck through in pen. The UNFCCC press office had not responded to a request for comment at the time of publication.

“We’ve seen increasing closing-down of civil society space and our ability to say what’s actually happening here. We’re not even allowed to say that Polish companies are sponsoring,” says Sabido. “This has not been a surprise. There has been a linear progress towards closing that space down more and more, but it makes it more and more important to say something.