Correction 11 February 2019: This article was amended to correct the statistics on populist parties and political polarisation. The headline was also amended.

Most Brits consider climate change to be the greatest threat to the UK. But not everyone is worried. As you may expect, there are some significant political and demographic differences between those who list ‘climate change’ as the biggest threat, and those that are more worried about North Korea or Isis.

If you’re on the left and identify as a woman, you’re much more likely to think climate change is a threat. But if you’re a politically right-wing or a man, you’re much less likely to be worrying about global warming, according to a new report from Pew Research Centre.

“The Intergovernmental Panel on Climate Change released a report last year expressing serious concerns about the possible impacts of climate change, both in the near and distant future,” the report says. “Broadly speaking, people around the world agree that climate change poses a severe risk to their countries”.

But ask a UKIP supporter what they think the greatest threat to the UK’s national security is, and they’re not particularly likely to say climate change. And they’re not alone.

Supporters of Europe’s populist parties are much less likely to worry about climate change than everyone else, according to Pew’s polling.

In the UK, Germany, France, the Netherlands, and Sweden, there are all double-digit differences between supporters of populist parties in those countries that agree climate change is a significant threat and those that don’t.

According to the research, supporters of UKIP and those who lean toward UKIP are 22 percentage points less likely to believe that global climate change is a major threat to their country than are those who are unfavourable of the party.

The biggest difference from a European country was in Germany, where there was a 28 percentage point difference between supporters of the Alternative for Germany party and those who are unfavourable towards that party that think climate change is a major threat. 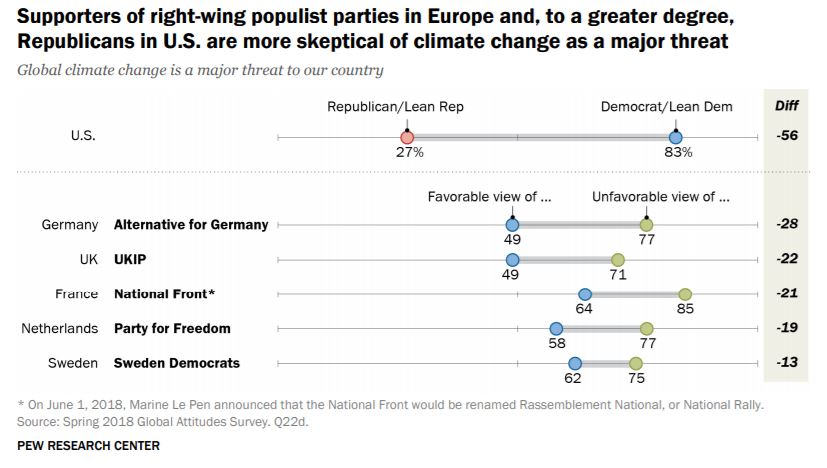 For many of these parties, immigration and controlling borders is a major issue. But both the IPCC and World Bank state that a changing climate is likely to lead to more people having to leave their countries due to extreme weather events and food security issues.

The ideological split in responses reflects a political divide over climate change. The research shows a 24 percentage point difference between those on the ideological right and left that think climate change is a major threat – with those on the left more likely to be concerned. That pales in comparison to the US, however, where there is a 56 percentage point difference.