Ever wondered what a major donation to one of London’s premier cultural institutions might buy you? Well, quite a bit, it turns out.

And the case of Sir Michael Hintze, the UK’s third richest hedge fund manager and known funder of climate science denial, is no exception, emails seen by DeSmog show.

The emails, released after a freedom of information request, highlight a conflict between the Natural History Museum’s educational aims and support for scientific research, and its ties to a group that rejects the scientific consensus on climate change, Culture Unstained’s Co-Director Chris Garrard said.

The museum’s mission “involves ‘promoting the understanding and responsible use of the natural world’” and “claims to be ‘committed to the values of integrity, trust and verification in all aspects of its science’,” Garrard said. But these are values that Hintze “clearly does not share”.

Responding to questions from Culture Unstained, a Natural History Museum spokesperson said Hintze’s £5 million donation in 2014 was offered “with no expectation of any influence, and that there would be no direct benefit for the gift, other than the acknowledgement by naming of the Museum’s central hall”.

But the emails show the gift has come with perks, coordinated by the museum’s Director of Development and Communications. They include:

Hintze enjoyed a front row seat at the Global Warming Policy Foundation’s annual lecture in 2017, given by former Australian Prime Minister Tony Abbott, who lost his parliamentary seat in elections earlier this year. Abbott claimed in his presentation, entitled “Daring to Doubt”, that higher temperatures caused by climate change “might even be beneficial” because “far more people die in cold snaps”.

When asked about Hintze’s position on climate change, a spokesperson for the Natural History Museum pointed DeSmog to a statement on Hintze’s website labelled “The Complexity of Our Environment”. The statement says Hintze believes it is “highly likely that the increase in concentration of carbon dioxide (CO2) is in part due to human activity” but that the “sole focus on CO2 emissions is too narrow” and “all sides of any debate must be heard to reach the right conclusion for society as a whole”.

In addition to funding the climate science denying GWPF, Hintze has close ties to the network of thinktanks pushing for market deregulation and a “hard” Brexit, based in and around Westminster’s 55 Tufton Street.

Most notably, Hintze is a trustee and funder of the Institute of Economic Affairs. An undercover investigation by Unearthed last year found the organisation had been setting up “off the record” meetings with senior politicians on behalf of their donors, which include oil giant BP.

Hintze was also a key financial backer of Liam Fox’s now-defunct Atlantic Bridge thinktank, which aimed to connect libertarian groups in the US with their UK counterparts and was forced to dissolve following a Charity Commission investigation.

Both Fox and recently elected Prime Minister Boris Johnson, also a former member of Atlantic Bridge, have received donations from Hintze in the past.

In 2014, Hintze made the single biggest donation to the Natural History Museum in its history. His £5 million gift even led to the museum renaming its central gallery “Hintze Hall”.

For Garrard, that move “cleanses and legitimises the Hintze name”, while doing a “disservice to the museum’s work and serious damage to its reputation.”

A spokesperson for the museum defended the donation, saying:

“Sir Michael, Lady Hintze and the Hintze Family Charitable Foundation (HFCF) support fundamental scientific research in institutions around the world, including this one. In May 2014, the Museum received an unrestricted gift of £5 million to support the Museum and its work, which includes research into the causes and effects of climate change.”

Hintze did not respond to a request for comment.

The email release comes just weeks after climate activist group Extinction Rebellion (XR) targeted the Natural History Museum for hosting the annual dinner of the Geological Society’s Petroleum Group, which describes itself as a “specialist group dedicated to petroleum exploration and production”. The Geological Society counts oil majors including BP, Chevron and ExxonMobil among its “corporate patrons”, as well as the fracking company INEOS.

Although it does not have any partnerships with fossil fuel companies currently, the museum has received funding from BP, whose exploration arm collaborated on a project analysing the museum’s micropaleontology collection, donated by BP in 1992.

One of XR’s demands during its protest in June was for Hintze Hall to be renamed, having also staged a “die-in” action at the museum in April to draw attention to the so-called “sixth mass extinction”, as part of demonstrations that brought areas of London to a standstill.

Ironically, the museum published an article a fortnight later outlining a landmark UN-backed report which “confirmed that humanity is destroying its own life support system as the natural world faces unprecedented declines”. One of the museum’s researchers worked on the study, the article said.

The protests may have implications for the museum’s engagement with external partners, as its “Third Party Engagement Policy” specifically notes the risk of “on-site demonstrations” as a “relevant factor” to consider when establishing a relationship with any outside person or group.

Garrard accused the museum of “repeatedly failing to implement” this policy and called on it to review its partnerships.

A Natural History Museum spokesperson rejected the criticism, saying in a statement:

“Sir Michael Hintze and his family are long-standing friends and supporters of the NHM. Our partnership with the Hintze Family Charitable Foundation is entirely in line with donor stewardship best practice in the UK and compliance with HMRC guidelines.”

The Natural History Museum isn’t the only cultural institution to which Hintze has close ties. He also sits on the National Portrait Gallery’s board of trustees.

After the gallery’s director Nicholas Cullinan personally encouraged Hintze to apply to be a trustee, Hintze was appointed to the museum’s board in early 2017. He made a donation to the gallery months later, as he had done previously to the neighbouring National Gallery while on its board. 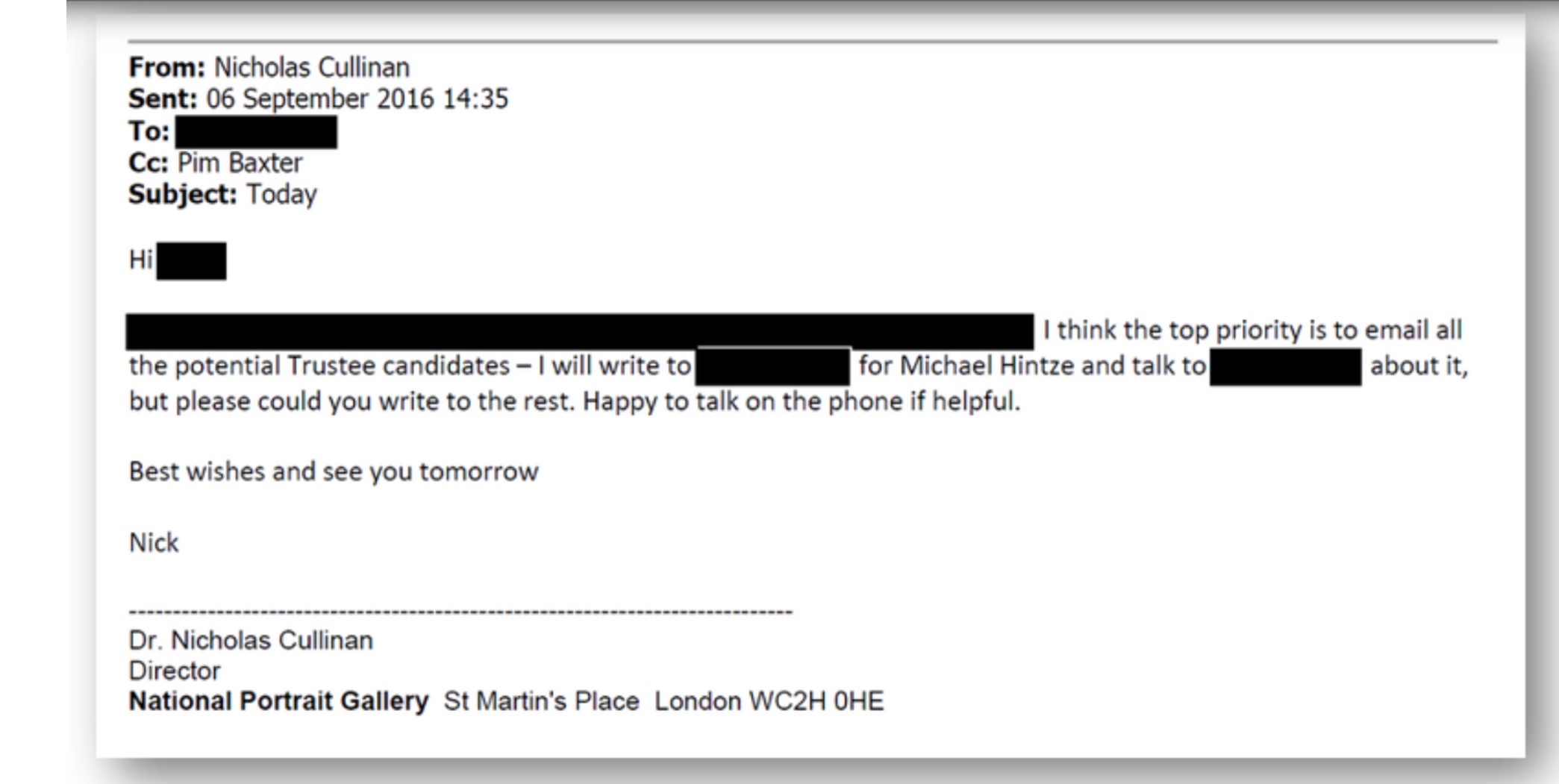 Cullinan later thanked then Culture Secretary Matt Hancock and his Policy Adviser for their help in appointing Hintze and the other three new trustees, a process which requires official approval from the Department for Digital, Culture, Media and Sport and the Prime Minister.

Correspondence between the National Portrait Gallery and Hintze also reveals the response of the museum to another controversial donor, the Sackler family. The Sacklers are currently facing a lawsuit in the US after being accused of creating “the worst drug crisis in American history” as a result of their opioid painkiller OxyContin.

An email from the Director’s Office notifying trustees about press attention around the Sackler Trust included a statement that said the museum “reviews all pledges in line with its ethical fundraising policy and its charitable objectives” but that it could not comment on any individual supporters due to “commercial confidence”.

The museum’s position may have changed since then, though, having issued a joint statement with the Trust in March not to proceed with a £1 million gift to the museum from the Sacklers. A spokesperson for the Sackler Trust expressed fears that the allegations could cause the donation to “deflect the National Portrait Gallery from its important work”.

Another beneficiary of Sackler family donations, the Louvre, recently removed all mention of the family from its walls.

Calls for leading cultural institutions in the UK to sever ties with fossil fuel companies are growing, something the National Portrait Gallery is well aware of, the emails show.

A summary of press coverage about the National Portrait Gallery in May 2017 cites a Financial Times feature on BP funding and Art Not Oil, the campaign coalition of which Culture Unstained is a member.

More recently, a group of leading artists, including previous winners of the gallery’s BP Portrait Award, has written to its director urging him to end the gallery’s long-running relationship with the oil company.

Gallery director Cullinan accepted that their letter “raises important questions about both the environment and funding for the arts” but defended the decision to work with corporate sponsors like BP.

In a statement at the time, Cullinan said government funding only provides a third of the museum’s income, with BP’s support enabling free admission to the Portrait Award exhibition. He did, however, say the museum had “noted the point the letter raises about a BP representative being on the Portrait Award judging panel, which is refreshed each year”.

Pressure on other institutions to end their partnerships with BP has intensified this year, with the actor Sir Mark Rylance leaving the Royal Shakespeare Company in June after 30 years. Egyptian-born novelist Ahdaf Soueif resigned from the British Museum’s board of trustees last month. Both left in protest at BP sponsorship.